Wednesday, 25th May:A quick recap – lovely day, not much cycling for the previous few days, so time to explore the Hockwold Fens, via a few byways and a mid-morning start. Not all exploring works though so I had to backtrack – where it says blocked and there are red dotted lines. The navigable route shown is available on this Bike route Toaster Link and is 130Km/ 81 miles long.

This is the last leg of my journey, I was planning on cycling from Hockwold along a byway known as Cowle’s Drove down to the banks of the River Little Ouse and then pick up a bridleway and head to Little Ouse (the village) and then back home through Prickwillow, Soham Wicken Fen and the Lodes Way/NCN51. 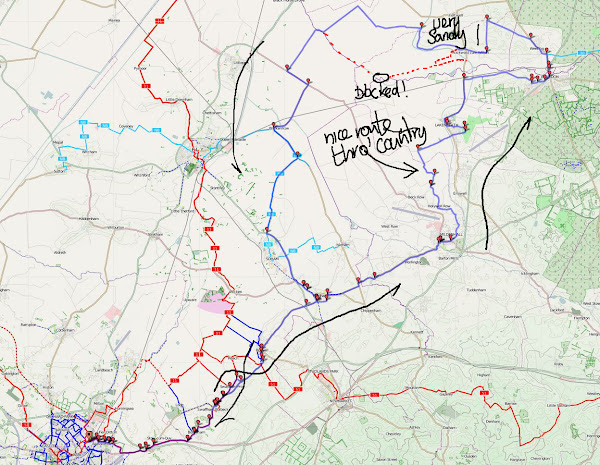 I headed into Hockwold Fens along Sluice Drove before cutting down along Cross Drove past Cross Drove Fishery.  Sluice drove never quite got too sandy, fortunately and I was a little worried that Cross Drove was going to be heavy going, but there was always bits of edge or hard-packed sand and I soon reached Cowle’s Drove.

The skies were getting a little cloudier, although nothing too bad and the drove itself had a pretty reasonable surface.  There were soft areas that I had to watch out for, but in general I was able to keep up a reasonable pace, although I was cycling into a slight wind.

This is Cowle’s Drove with a rather wobbly cycle track down the middle. It wasn’t mine which was the track to the right. I tried to stay out of the softer patches of sand. 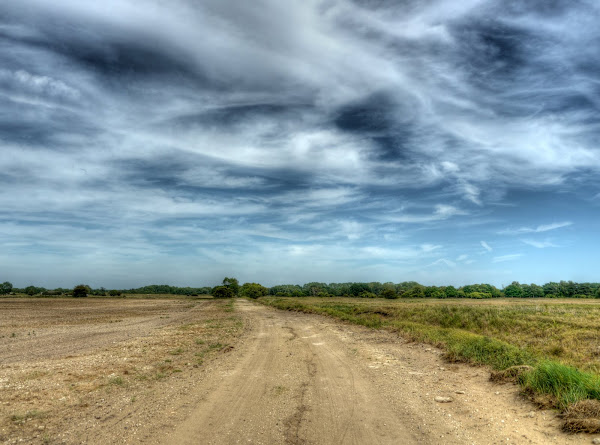 As Droves go this one was well maintained and looked like a promising off-road country route. I passed the occasional tractor working in the fields alongside. The track never seemed to get too potholed although there were patches where potholes had been filled. Here is a Google Satellite view, you can see it get closer to the River Little Ouse, with quite a substantial wetland area below the river. 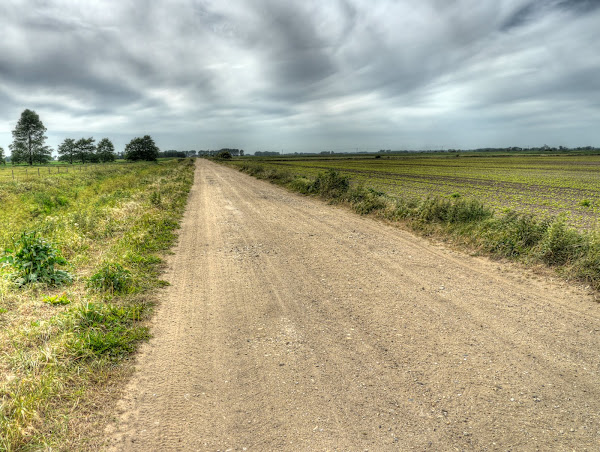 As you might expect there was the occasional farm building – in this case extremely dilapidated. There was a more modern one next to it.  Someone has also taken the trouble to get power out here as well. It is always a little disappointing to find myself cycling in the wilds, only to find they are not wild at all. On a family holiday we once stayed in a lodge in Canada, 30 miles from a tarmac road with power provided from a generator and instructions to ensure someone knew you hiking plans – that did feel a little more remote especially when we saw bear tracks. 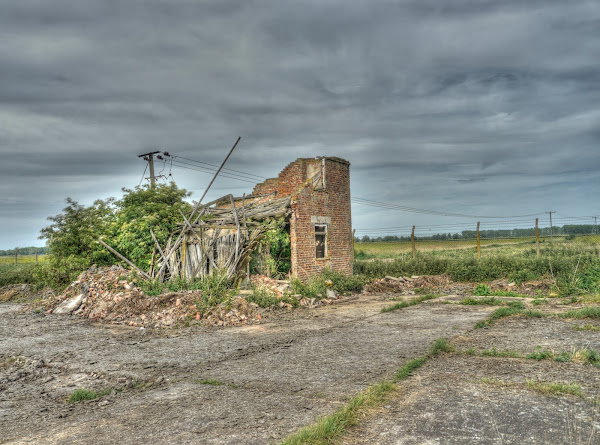 At this point there were quite a few ditches (drains) heading though the fields, which on the south side of the Drove did not look quite so heavily cultivated.  There are cattle grazing in the field to the right of the drain. 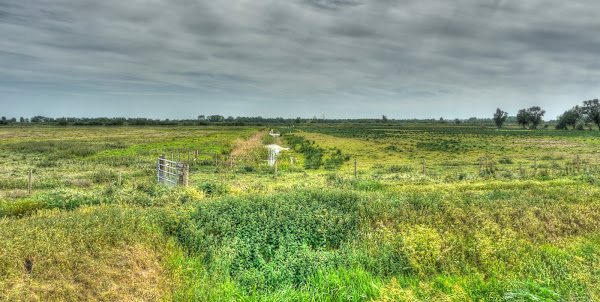 In fact there was quite a ditch alongside the Drove with bridges across into the fields. 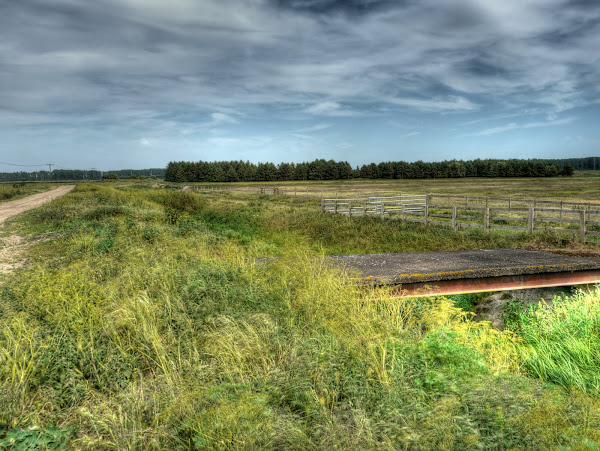 At this point I came near to the end of the byway and reached the bank of the River Little Ouse. It did not look promising as a way through. There was a small “encampment” on the river – Xanadu Nature Reserve. At this point I did have a go at cycling along the top of the river bank, there was a slight track, but overgrown with stingles (stinging nettles) and thistles and grass and after a couple of stings I decided to look for a different route.

The OS map showed a few farm tracks heading roughly in the right direction, one called Headland Drove, but there was a gate across the track and at this point I thought I’d just head back and instead cycle along Corkway Drove and along roads to Little Ouse (the village).  By this point I was getting weary. Off-road cycling is great fun, but does tire you (well me) out far more than cycling along normal roads.  I guess it is because you use your whole body to “jump” small potholes and heave the bike around when cycling along sandy or stony tracks tracks.

So this is the River Little Ouse end of Cowle’s Drove and for a change I decided to cycle all the way along it back to Hocking rather than past the fishery. Technically that is the drain alongside it the post is actually pointing up the byway. 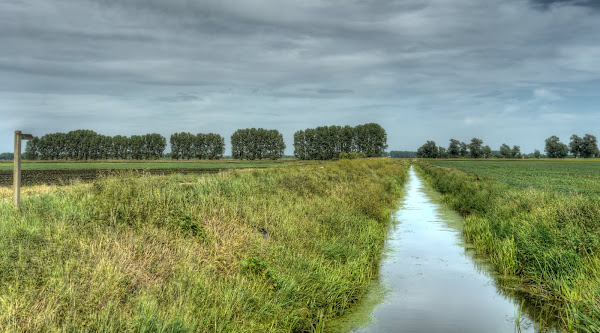 All day there had been jets flying in the sky.  They seemed to head out in a group of four or five and then sometime later return and fly down the runway and then take off again. I didn’t actually see them do circuits and bumps but that is what it sounded like. I think they are McDonnell Douglas F-15 Eagles which do fly out of Lakenheath. They are pretty noisy planes.

I once flew into a regional airport in the US where the Air National Guard also used the facilities.  On the way out as we sat drinking coffee in the small cafe in the airport a few flew out – taking off in groups and then heading almost vertical after take-off – they building rattled with the thunderous noise.  You realise that civilian planes are quiet by comparison. Mind you I once took off on a commercial flight just after Concorde had been down the runway. That thundered as well and as well trundled down in a 747 we seemed to be travelling through smog. 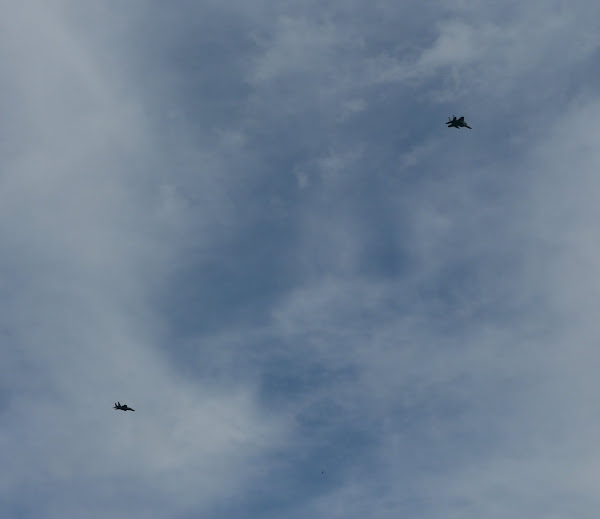 Once back in Hockwold I cycled out along Burdock lane (the RR30) route stopping only to admire the hills – we don’t get hills in the Flatlands! That must be over 20m high. 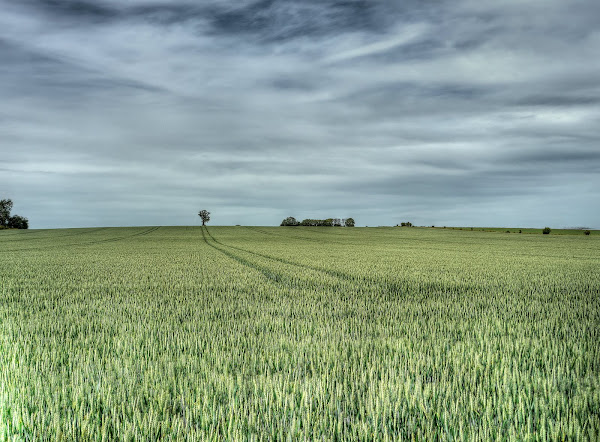 I took the off-road RR30 route which passed over  a bridge over the Cut-off Channel just by Whitedyke Cottage. This route followed Corkway Drove which I followed the whole way down to the bit where it stopped being a byway and became a road. This led onto Anchor Drove and Little Ouse.

The last time I cycled this way I mentioned the bridge but didn’t take any pictures, so here are some.  Conveniently some tractors and a Volvo Estate happened by – it is quite a steep bridge by normal standards. 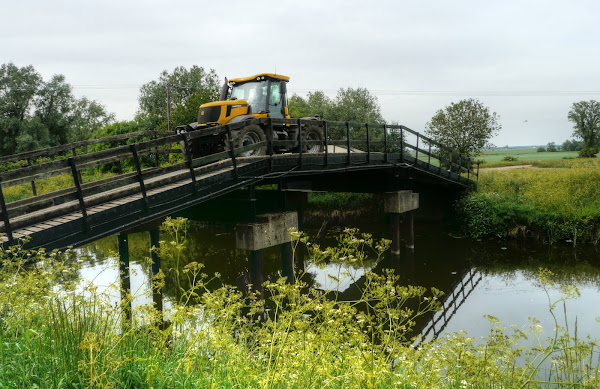 The same bridge without a tractor on it.  This time I cycled over it from right to left. That is the view down. The banks were quite overgrown. without actually checking it out it did not look as if there was an inviting bridleway. In fact I seem to remember seeing a sign saying Private property. (Sometimes landowners use such signs to discourage vehicles which don’t have a right of way from travelling over bridleways on their land. I feel that it can be misleading though. 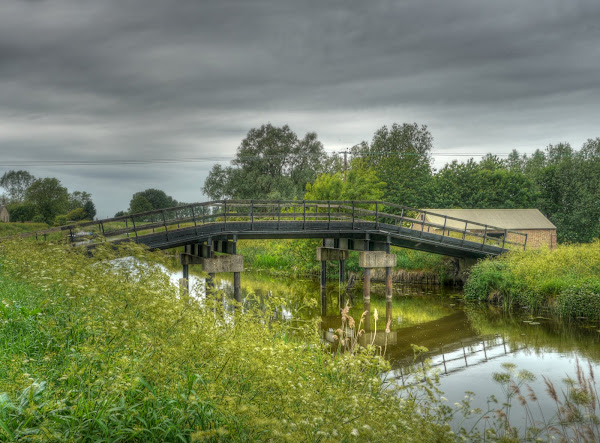 The bridge is quite a straightforward construction with piles set in the middle with a gap to permit navigation by boats. 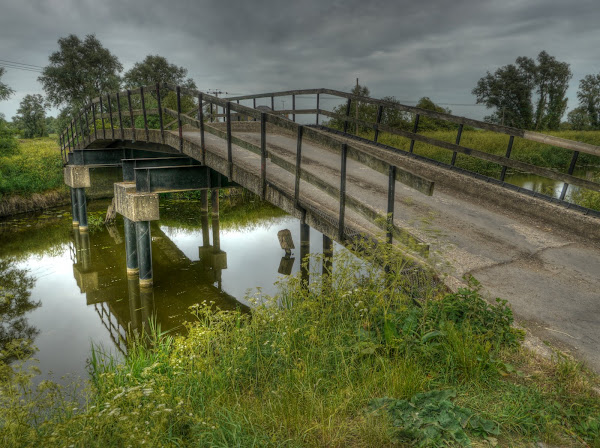 Conveniently I must have hit rush hour for this bridge. I have never seen it so busy before! A boat was heading upstream. 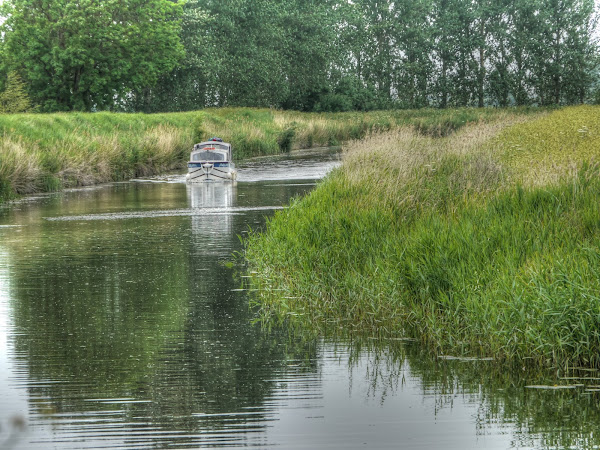 It was the Lesley Ann and the skipper didn’t hesitate as he headed for the bridge. 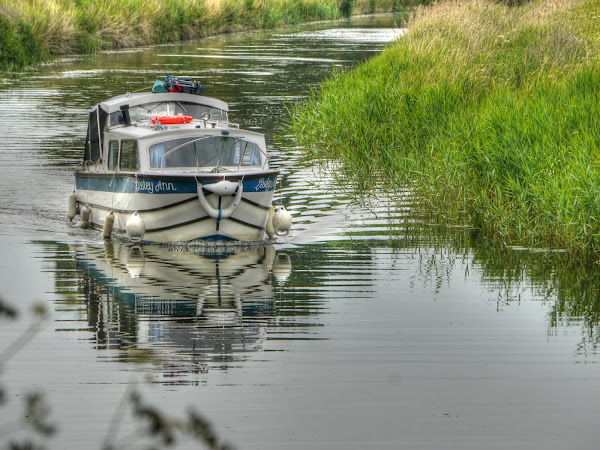 There was plenty of room though. 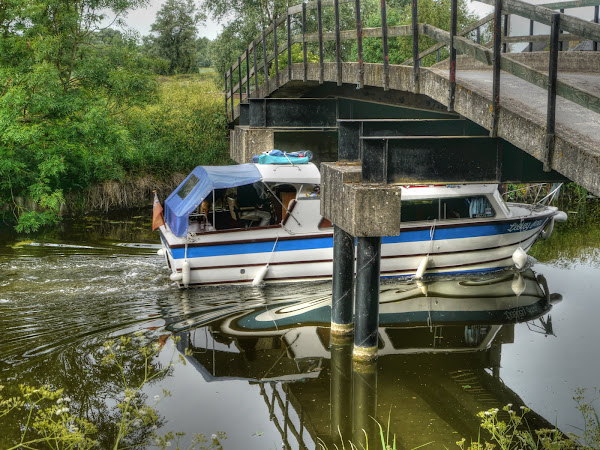 By this time I was feeling weary and had cycled somewhat further than I had signed up for so after passing through Prickwillow and then down towards Soham on the Great Fen Road I really just wanted to get on with the ride. Mind you I did stop to take a picture of this concrete track heading off the Great Fen Road. Look how as the peat has shrunk it is caused the road to ripple and then break up. 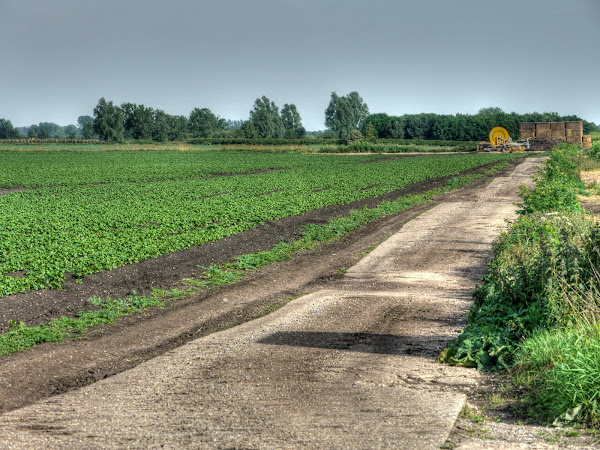 When I got to the A142 I was planning on crossing and cycling through Soham and on to Wicken, however there was so much traffic I gave up and cycled along the edge of the road. It seemed quicker than waiting and although this is a busy road I find that the white line helps motorists to improve their aim as they drive like maniacs drivers. I was thinking I would cross over at an opportune time as there are a few roads into Soham, but no. In the end I carried on into Fordham and out along the Ness Road to Burwell. There was one stop on the outskirts of Fordham though – cyclists second class citizens? – you bet. The idea that cyclists should defer to their betters (motor vehicles) is institutionalised and there is also an element of ambiguity. You also have a give way triangle on the ground – so should you get off or just give way, but carry on cycling. 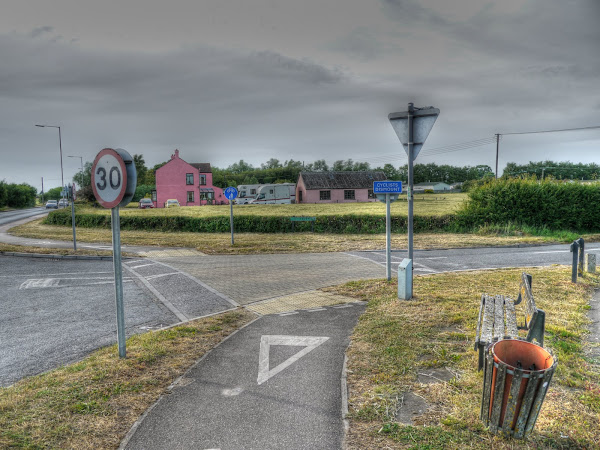 In the spirit of taking a direct route home I carried on through Burwell, Swaffham Prior and Swaffham Bulbeck and onto Quy before joining the NCN51 route. I still clocked up a reasonable distance though.

In hindsight I should probably have drunk more fluids – it as a hot and sunny day. I also found that my cycling shorts had exposed a bit of white thigh (as opposed to tanned, brown thigh).  When I had a bath that evening that bit of exposed skin stung – I had suffered a bit of sunburn.

Next time I must pay more attention to the maps before assuming there must be ways through (and making sure I use sunscreen!)..