Friday, 16th December: Friday was going to be an interesting day, I had a meeting in London in the afternoon, but had to get back to Cambridge in order to pick up my daughter on the last plane from Edinburgh. The added complication was that when I woke up it was snowing, which is recorded as rainfall on the Cambridge DTG weather page. The graph shows quite a lot of rainfall which makes me wonder quite how that works with snow.

Now my original plan was to cycle to the station as the timings were fairly relaxed and it should have been easy to get back in time in order to drive down to Stansted Airport. My planning had even extended to clothing that was suitable for cycling and “relatively” smart – well proper trousers and a jacket.

The trouble is during the morning the snow turned to rain and then I had a decision, cycle in full weather gear (leggings and rainproof jacket) and pack my jacket and trousers or drive. The changing facilities (the Gentlemen’s toilets) at Cambridge Railway station are not that salubrious, in my opinion. Now there’s a thought – changing rooms. There is also the hassle of what to do with my wet weather gear if I do change. Ideally I’d want it to dry out, but if you have to wrap it up and carry it around then it can be pretty unpleasant to change back into for the journey home.

You can see where all this is going, I wimped out and decided to drive to the station. That of course leads to parking anxiety, so I had to allow extra time in case the car park was full.  It is all very well letting the train take the strain, but it is all the other hassle that gets me. As it happened there was quite a bit of space available on the Cambridge Railway Station car park – here are four spaces all in close proximity. 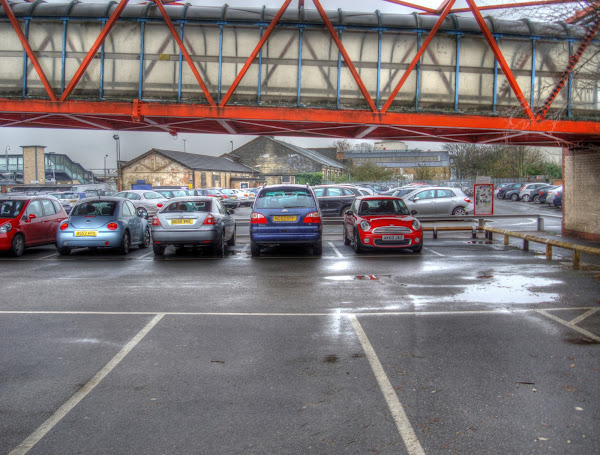 Despite dire threats about what happens to bicycles locked to these car park barriers cyclists still use them. What else can you do if you turn up to catch the train during the rush hour. They won’t let the bike on the train and you don’t want to be late for work. Sometimes just catching the train can be uncertainty enough. 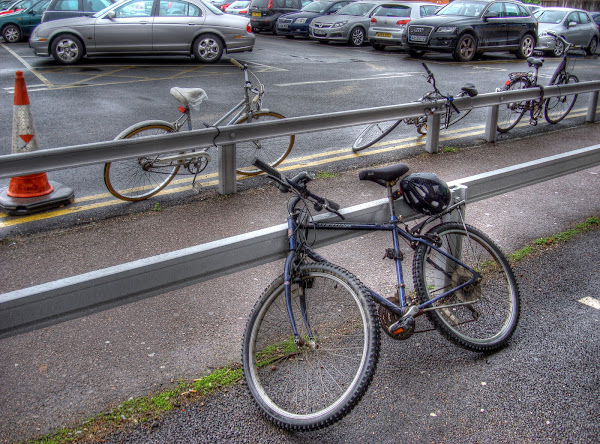 As you can see cycle parking is in short-supply and so space is at something of a premium. 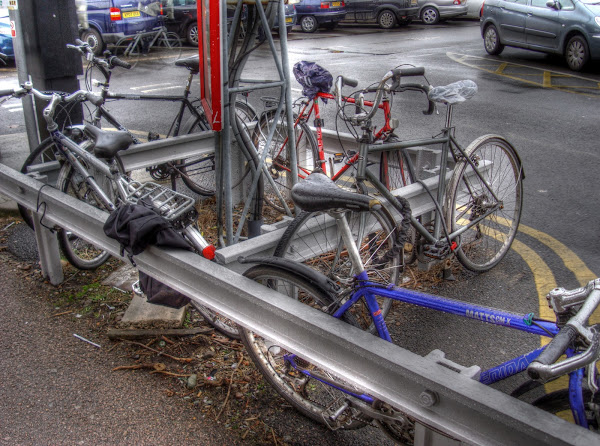 Presumably the cyclists feel that the risk if locking their bicycles up around that area is less than along the footpath barriers. One thing – the car parking was cheaper than first think in the morning. 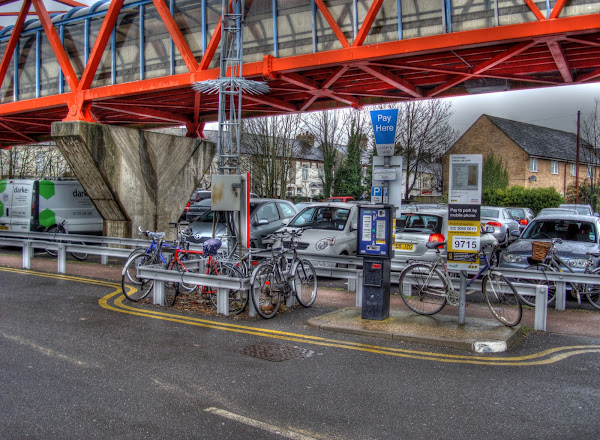 There are premium spaces available for cycle parking, but a quick web search throws up little information on quite how you rent a space. I guess the signs on top say what to do – but it is too blurry to read from this picture.  There was someone unlocking their bike just after I took the picture but I thought it better to be on my way. As you can see yet more bicycles locked but not secured.  Although I struggled to find much about how to pay for a cycle space there are websites that offer parking space near to Cambridge station on private drives for a fee, such as this one, 4 minutes from the station for £20 a week, compared with the station car park at £33.20 per week. I presume that a space (at the Station) is guaranteed, but I am not sure. 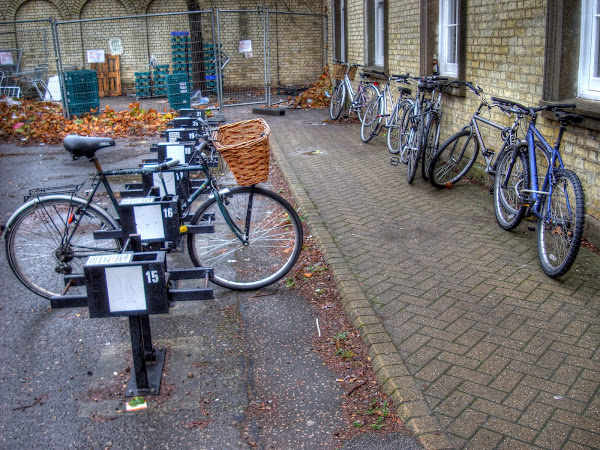 This was the first time I had used the station since the opening of the new platform and as luck would have it my train was departing from one of the new central platforms.  as I walked up to the new bridge I was just in time to get a slightly blurry shot if this cyclist carrying his bike up the stairs. Why you might ask when there is a lift and a cycle ramp. 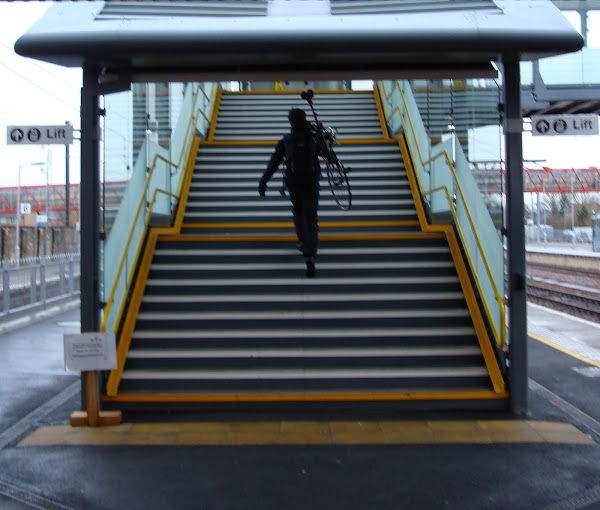 Well because they screwed up on the ramp up the stairs. The idea is that you can wheel you bicycle up the bit of angle iron – but the observant might notice how close it is to the handrail – the trouble is this wastes money and I bet it will still be closer to the handrails than the width of some handlebars (my Marin’s for instance). The modification process is one of those invisible ones, perhaps the elves come out at night and will move it millimetre by millimetre. 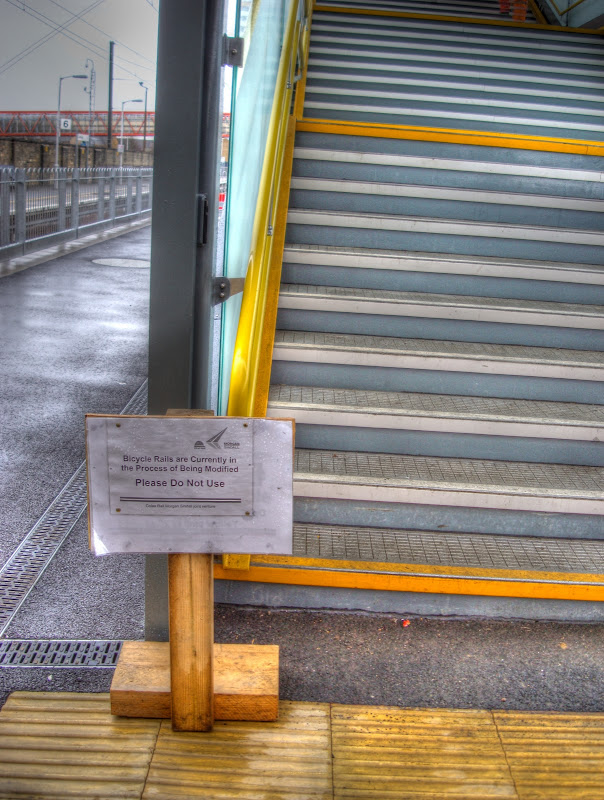 This chap’s bicycle looked like a light-weight racer, easier to carry up the stairs and perhaps too desirable to want to leave locked up in the cycler park. 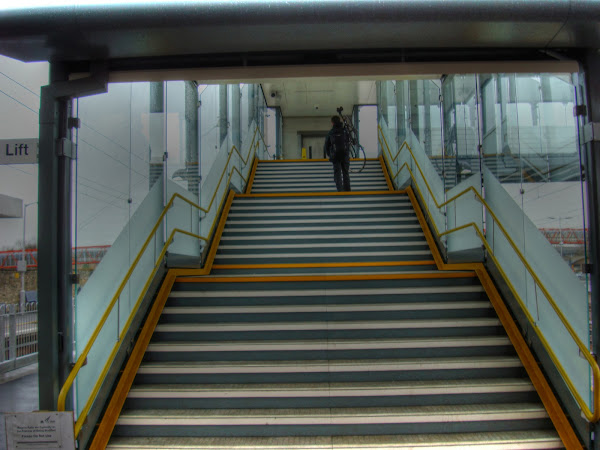 This is the view from the new bridge looking back towards Carter bridge – for cyclists and pedestrians. 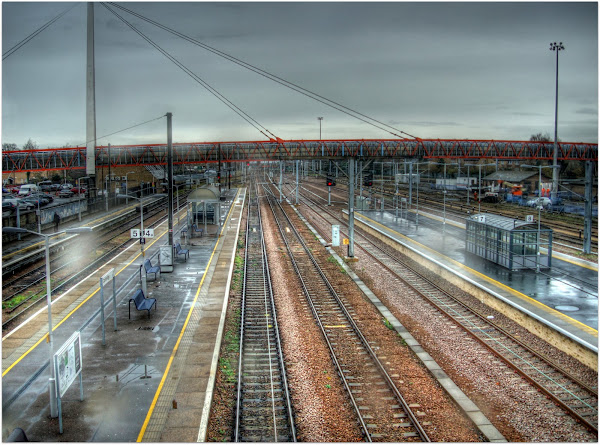 One of the new central platforms – with clearer electronic displays.

Another cyclist with her bike ready to catch a train. 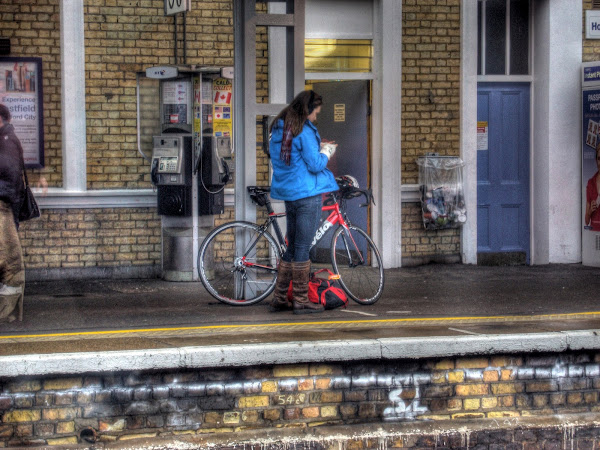 As we passed Royston there was snow on the hills. 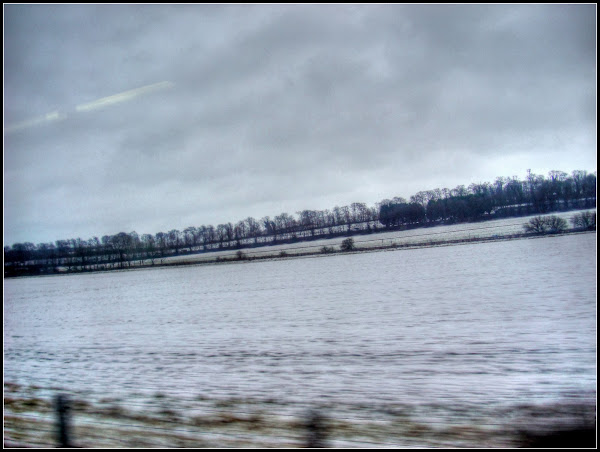 This is where you put you bike when travelling on the London trains – in the doorway. You also hope that it doesn’t fall over. 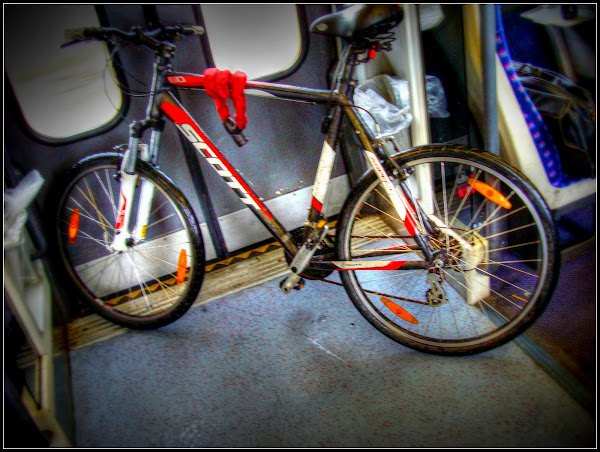 As you can see I used Picasa’s new frame feature for the last two pictures.

In the end I got back home in plenty of time to get to Stansted later – my daughter’s flight was delayed as the planes needed de-icing up in Edinburgh.