So much to do so little time. Well that is sometimes how it feels as we reach the end of yet another year. I’ve said it before and I’ll say it again, where does that flippin’ time fly to? Here we are already at the end of December.

The good thing I suppose is that there is nothing major to do, the bad news is that there are quite a lot of minor things to sort.  Most of them are quite pleasant, none of them particularly onerous and of course a few bills come in as well. One niggly thing is that the squealing pig (my name for my Landrover Discovery after it developed an intermittent squealing noise that did not diagnosed until the car left its warranty period) has now told me (via the dashboard) that the front parking sensors don’t work!.

I don’t do an awful lot of car mileage if I can help it. I have several bikes with significantly more mileage than my Disco, so, what I consider is a poor level of reliability irks me more than a little (and so does the cost of fixing it). I am not asking for sympathy, don’t buy something unless you can afford to run it is my motto. (Actually I’ve just made it up but it sounds about right.) I suppose that in this day of modern electronics at least the parking sensors have reported the error of their ways. You wouldn’t really want to find out they weren’t working by driving into (in my case) the back door of the house!

Of course there is also Christmas stuff to sort and it does lead to pleasant anticipation and no I don’t mean the presents I am going to get. The trouble is I do suffer from present-buying anxiety, trying to buy something that the recipient wants, but wouldn’t get for themselves is sometimes a challenge (and of course doesn’t cost an arm and a leg!)

I also need to tidy up some Blogging loose ends, like the header that says I want to cycle in Japan this year (2011). That definitely has to get changed, I’ve also decided that the bit about me could do with trimming.  I also have to tot up my distance for the year having come to the end of an experiment. I tend to believe that what gets measured gets done and so for the first time in years have not been putting my cycling stats into an Excel spreadsheet.  Previous years have seen me cycle around 10 to 12 thousand kilometres, without even thinking about it this year’s total will be less.

So I need to reflect on next year and given this years experiences that will mean one of several things. The first is to set a goal that I will need to prepare for, the second is to set some cycling (and weight-losing) targets and the third is to keep my cycling spreadsheet up to date.

I have also started a new Blog, don’t worry it will not replace this one, it will be more pictorial and as soon as I have created the first Post I will mention it and why.

So here is a quick round up of various bits and pieces that have ended up on my Internet Browser.  Starting with a report that the CGB (Cambridge Guided Busway) is expecting to carry its millionth passenger in Jan 2012 and they expect to have carried 2.5m passengers by the end of the first year and more buses are on order.  Although I have a soft-spot for trains I am pleased to see that the CGB seems to be a success in terms of bus passengers as well as for cyclists and horse-riders and walkers. It wasn’t cheap after all. 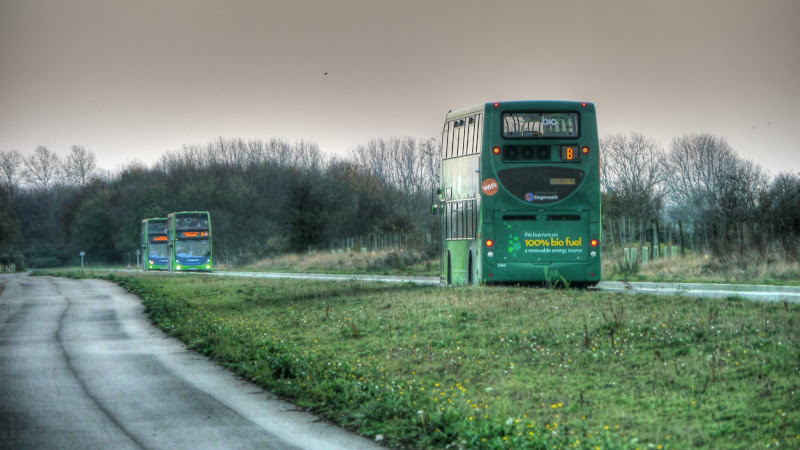 MikeC tipped me off about the excellent Wicken Vision blog – John’s Blog – it talks about the stuff that gets done in and around Lodes Way. It also mentions a local Blacksmith – Mike Overall of Twenty Pence Road, Cottenham. I used to enjoy metalwork at school, we used to make things like toasting forks on the forge as well as planishing copper and enamelling copper.

Talking about metal – here is one way to do it. “Scrap metal thieves cut hole in van floor to make it easy to swipe manhole covers”. I guess it is a combination of the rising value of scrap metal along with the difficult economic times.

Of course no cycling Blog would be complete without a gloating mention of car parking issues. Apparently there have been years of problems for St Matthew’s Gardens which means “Parking clampdown planned for Cambridge Housing estate”. The issue appears to be one of congestion. At the end of the day when all’s said and done parking is a game of two halves. We all want free, road parking for our cars but not for other peoples, parking has become a cliché of our age.

Mind you it isn’t just residents spare a though for the Police as there is “Nowhere to park for speed-check camera van” on Mill Road. It would appear that the issue revolves around whether to have visible of hidden police checks. Apparently the Cambridgeshire County Council’s  east area committee heard that casualty figures do not merit hidden checks.

This strikes me as being one of the issues we face in society, surely roads are not just about moving vehicles around as quickly as possible. Take Mill Road – this is a “shopping street” with interesting and quirky shops, many people live in the side streets around Mill Road.  So should this just be an issue of casualties, surely not, we should also consider the quality of life for the occupants and people who visit the area.  Having said that only a small number seem to be speeding, over 16 hours there were 27 drivers driving at 20-24mph and only 2 at over 30mph. There are other streets where on a short journey on my bike I see more speeding cars.

Parking rears it head along Riverside with a call for “yellow lines to help clean up Cam”. Whilst this might look a little like a NIMBY problem it arises from the rather love-hate relationship we have with cars (and motor vehicles) in general. We love or own cars and hate everybody else's.

Shared-use paths are for everyone – NCN51 in Bottisham 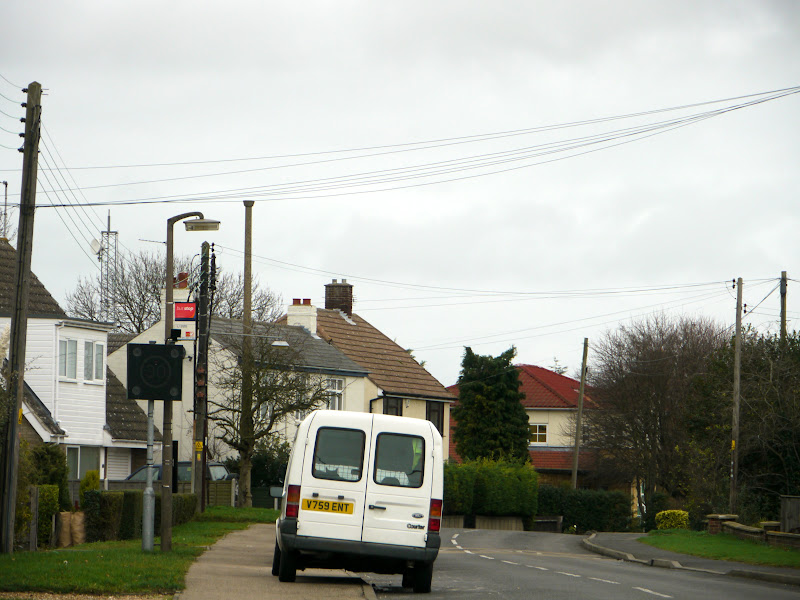 A quick bit of train news, the Queen has let the train take the strain, I wasn’t on the train this time but have been before and it creates almost no fuss.  It would appear that the freight link improvement between Ely and Bury St Edmunds might also boost chances for a Railway Station at Soham. The old one was levelled in a wartime explosion. Also a train has been named Ely cathedral, although it was only a second lass 379 train. 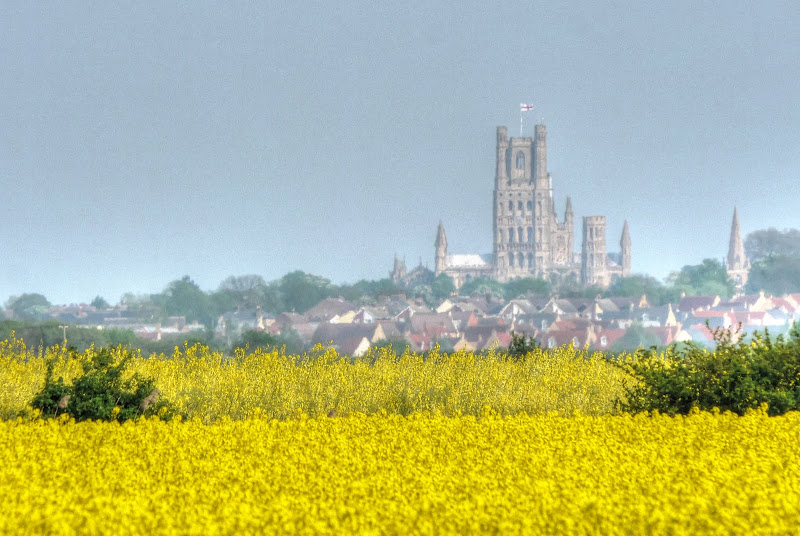 We have also had an evolving story in which a 13-year old girl was knocked off her bike by a van driver suspected of drink driving. It was then reported that she was saved by her helmet and the van driver was banned for two years and find £250 plus £100 costs. The family were then reported to forgive the van driver. It is interesting to see how stories evolve and what elements of a story drive that development. The good news is that she is ok, it does add grist to the mill of those who feel cycling is dangerous though.

Also what worries me is that it promotes the idea that the only safe way to cycle is with a helmet and as reported in Cyclists in the City the WI have been discussing the idea of promoting compulsory helmet wearing. Which as the post discusses focuses the debate of cycling safety in the wrong direction. How do they manage to be safer in the Netherlands with less helmet wearing than we get in the UK? By focusing on the right issues.

In an old report in the London Evening Standard (April 2009) “Pedestrians more at risk than cyclists” – which just goes to show that being a pedestrian is no joke either. Perhaps they should wear helmets as well. 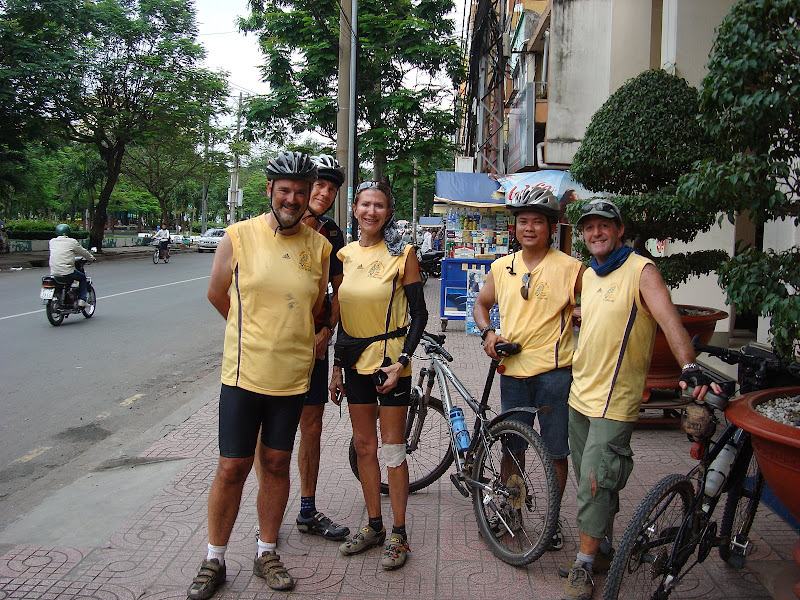 I also read on a Forum of news reported by the Scottish Director of the Road Haulage Association. From the report I am not sure whether he makes certain remarks or is quoting others, including; “a public road with motor vehicles is no place for a cyclist” and cycles “be fitted with headlights that must be on at all times”. There also appears to be a whinge about cyclists with helmet cams reporting poor driving. As a cyclist I felt a little intimidated by such statements. Having said that for the sort of cycling I do and where I do it the brand name lorry drivers (Tesco, Sainsbury etc) are among the better drivers on the road.

Tail-gating Lorries on the A14 near Quy – surely not 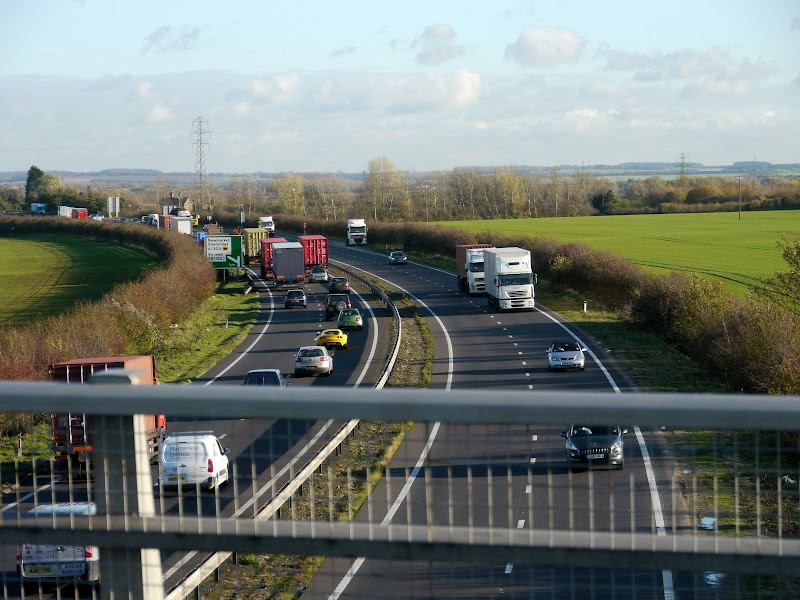 I ought to also mention another fly-tipping success – “Man fined after dumping medication in the countryside” and another chap got caught a second time! There has also been a mistaken bicycle case as well – something along the lines of “I thought he was riding my bike guv”. 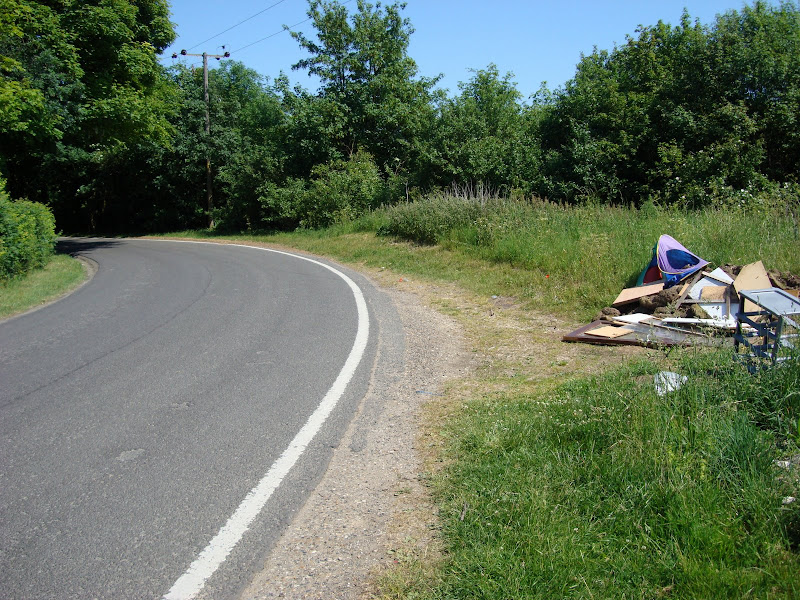 And finally some pictures; “red sky at night, starlings’ delight”, a world record Christmas display, some stunning pictures from the winners of the National Geographic Competition, amazing pictures from space (the Space Station actually) and some Altocumulus Lenticularis clouds in the UK.