How to slow speedy cyclists down!

One of the problems with allowing cyclists to share pavements is that they think they can speed - blighters that they are. Here on the Sustrans 51 route between Swaffham Bulbeck and Bottisham in Cambridgeshire the pavement has been designated as shared use and an additional bridge built for walkers and cyclists to avoid the expense of modifying the small brick bridge that was already in place for the road. So how can you slow down those pesky cyclists, one way is to make the path too small for any form of foot or cycle traffic to easily pass - but what about when the path is clear? Here is a cunning trick - make the cyclists gets off - that'll slow them down. There is nothing like a sedate walk across a little wooden bridge to kill a cyclists momentum. Although cocky cyclists who realise that you can actually see ahead and check the road might be clear will get a shock in the wet - their wheels will slide all over the place on the wooden bridge. 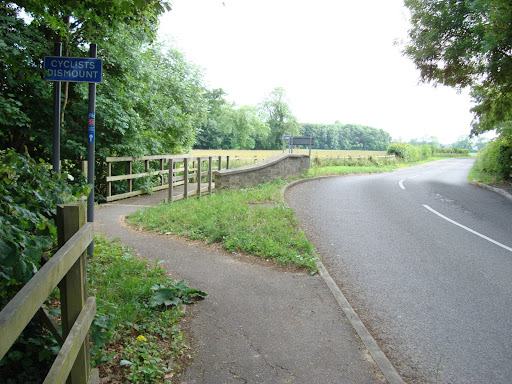 The only trouble with this approach is that cyclists will briefly re-join the road to avoid the wooden bridge and then nip back on just after i, or just carry on and cycle across it. This just adds to the myriad signs, aimed at cyclists, that seem to be designed to be ignored. It is a great pity they could not either put a more informative sign up or save the money for better cycle paths in the first place.

Just think - now this is quite a narrow bridge - what would drivers do if there were a sign saying "MOTORISTS GET OUT OF YOUR CAR AND BACK IN AGAIN" - they'd laugh. I do think that there is some belief that motorists can't be cyclists and vice-versa - which ain't true! So a motorist cycling will ignore signs that appear stupid.