Cycling news - but no cycling (and a walk around Ely)

"Parking those bikes like that - they must have been asking for it!. My quotes there - but a news item in the Cambridge News: "Bike crime soars in the city" reports that whilst crime has plummeted in the city (by 10%) cycle theft has "rocketed" by 10%. What this means in numbers is that in the period January last year to January this year 2,269 bikes were stolen. The report goes on to offer the sensible advice of a police spokesman - but it got me thinking. Whilst not intentional the emphasis on prevention almost seems to blame the victim. No I do lock my bike with a D-lock when I have to park it out on the mean streets of Cambridge and the advice to park in view of CCTV sounds reasonable. However the parking facilities must also influence the risk of theft and take some of the blame. There are two excellent areas in Cambridge where cycle parking is available within multi-storey car parks; Grand Arcade Cycle Park and Park Street Cycle Park. Both are lit and secure and I assume have CCTV around the place.

Contrast that with the Station cycle park - it strikes me that there are two types of theft - the opportunist thief who steals a single bike (at a time) to get home of perhaps to make a bit of money, and the career bike thief who will steal a bunch of bikes at a time and will probably use a van to take the bikes away. It would be interesting to know where the bikes in Cambridge are stolen from and whether they are stolen in "bunches". My single point of reference is that my bike was stolen from this cycle park a few years ago - they did not even leave the broken lock behind! However with the huge jumble of bikes, telling whether someone is stealing a bike or merely trying to extricate a bike from the jumble around it can be quite tricky.

There is also a trick where when you return at the end of the day to retrieve your bike someone else has accidentally locked their bike to the stand and to you bike. This stops you removing your bike, I assume they then come back later to steal the bike by breaking your lock. I do not know anyone this has happened to though. It might be a genuine mistake. I know that when I arrive at the station to catch a train timing can get a bit tight as I waste time looking for somewhere to park. (If you read my other posts on Station cycle parking - then no I have not yet written to complain!) 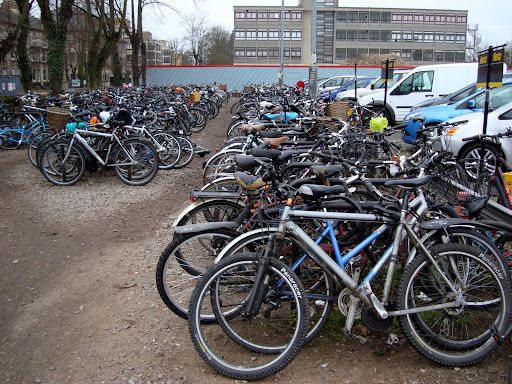 Talking about complaints there was also a piece in the Cambridge News in which a hotel chain had listed Ely as one of the top 10 undesirable places to visit.: "Mayor's anger as survey says no-one wants to visit Ely". I have to say I find it difficult to believe and the article does mention that the Ely Travelodge (Travelodge did the survey) never has offers as it is always fully booked and does not need to entice people to stay. So I do wonder exactly how they did the survey and how many people were asked - although not enough to go and find out!

Why am I telling you this - well my mother (visiting for the week) has turned down my kind offer of touring by Tandem so we are visiting places and walking around them instead. We visited Ely and found it a lovely place to stroll around. We parked down near the river (River Great Ouse) where the long-term parking is free - that in itself was a big surprise to me. I normally cycle to Ely when I visit, or occasionally, I will drive and park in the Railway Station car park when catching a train to Manchester. You have to pay then - but it is cheaper than Cambridge Railway Station car park. So immediately it feels more inviting because you don't get ripped off for parking. We then walked along the river where it was clean and tidy with cafes and restaurants to hand for the weary traveller.

I apologies but for some reason I do not take as many pictures when walking? So here are some I took earlier. This is looking back down the river towards Ely. The bridge carries the railway line. Ely also seems to be a centre for boat hire as well with Longboats and short boats. 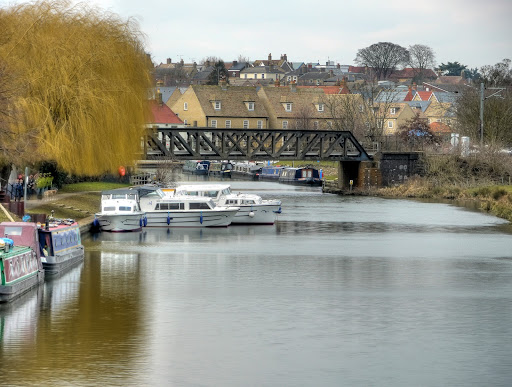 We walked up the hill towards the Cathedral after crossing the railway line - up past Oliver Cromwell's house towards the town centre. We did not venture into the high street but passed many charming houses. It turns out that Ely is the third smallest city in England after Wells in Somerset (where I grew up) and the City of London. Wikipedia goes on to comment that the name is commonly believed to derive from "eel" and "-y", meaning Eel island. The low lying fens surrounding Ely were marshy before all the drainage work and a source of eels (and mosquitoes and malaria as well apparently.) 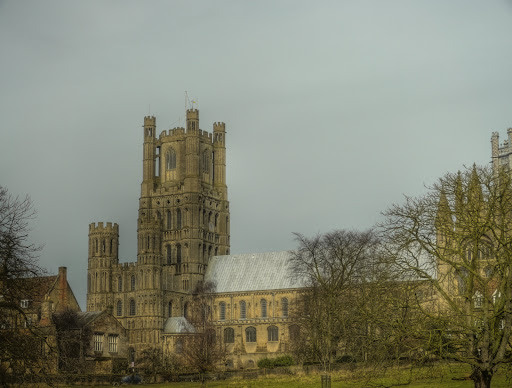 The cathedral has a rather nice stained glass museum to visit as well if you have the time. We then returned through a park alongside the Cathedral called - The Park - a wonderful bit of green space within Ely. In the Summer you often see people having their lunch in the sunshine (at lunchtime that is). 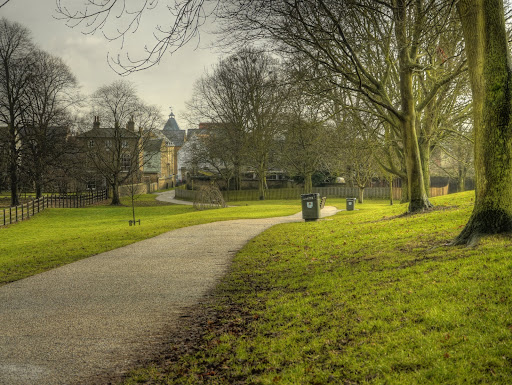 All in all we really enjoyed our stroll around Ely - interesting architecture, an interesting river, information boards around the walk we took and although we did not visit them this time lots of places to visit. The parking was free and there were clean Loos in the car park. I have to agree with the Mayor of Ely - I cannot understand the survey's conclusions at all.