Cycling through some Cambridgeshire Country Villages

The weather is definitely picking up here in the flatlands, apparently we have warm air blowing in from the south - not a moment too soon as far as I am concerned. Although I enjoy cycling to and around Wicken Fen it is good to cover different ground sometimes. The great thing about the Wicken Fen route is that it is relatively traffic free all the way and feels pretty safe. There are o fast roads to cross or cycle along. I have been cycling all my life and have cycled in a variety of countries and types of road, but I do feel that cyclists are treated less courteously on the roads in the UK now. Some might say that cyclists have themselves to blame - red light jumping and cycling on pavements being the two main crimes. Well I don't do either and don't condone them either but still feel that it is imbalanced - cars might get a scratch, cyclists get killed. Why am I saying this well on what was a very pleasant loop around Cambridge there were a number of instances when I felt the road was unsafe.

The joinery started along Sustrans 51 out towards Swaffham Bulbeck before detouring over the Swaffham Heat Road towards Dullingham. The farmers are still busy preparing the fields for planting and the Heath Road was no exception. 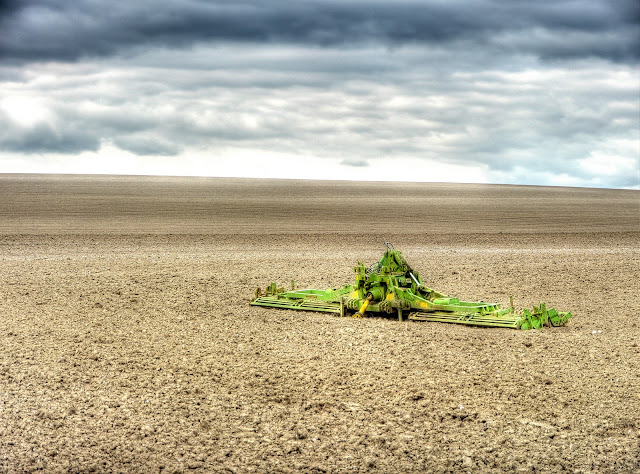 I also saw my first "wild" daffodils on the approach to the bridge over the A14. There were daffodils coming out on both sides of the road - I have no idea why they seem to be early here it is not particularly sheltered or south facing. 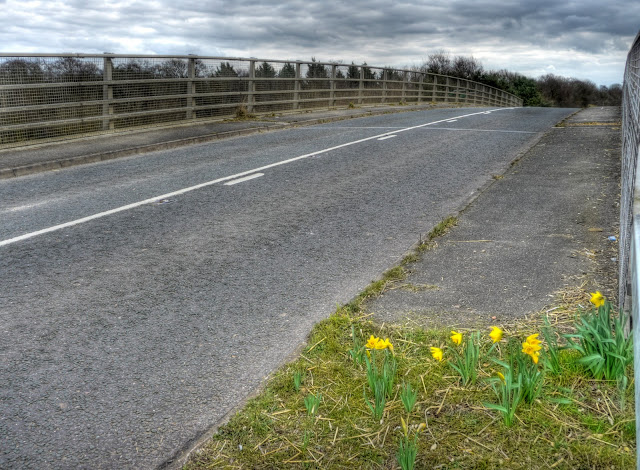 For flowers growing by the side of a busy road (the A14 not the Heath Road) they seem in good shape, especially given the cold weather delays. 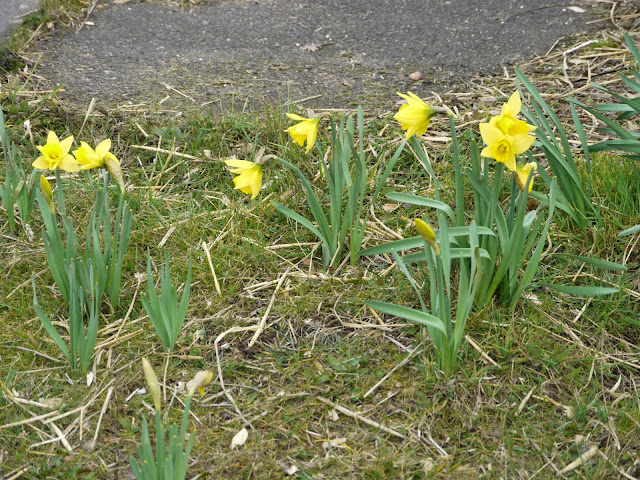 My route involved some minor climbing, the highest point on the route was only 100m though and then a short drop down into Dullingham, unfortunately there was a train due at the station, which in the best traditions of the railways, was around 0.5 miles/0.75Km from the village itself. This is the Cambridge to Ipswich Line (perhaps they call it the Ipswich to Cambridge line in Ipswich!). It is not a busy line there seems to be a train either way each hour. Although it is popular for Hills Road College students commuting into and out of Cambridge who live in the the surrounding villages apparently. I believe that they used to run a single "coach" but for the school rush hour they have a double "coach". This line has not been electrified and the level crossing is still operated by the signal man who pops out and opens/close the gates as appropriate. The stone pillars look to be originals.

Give the congestion problems getting into Cambridge it is surprising that it is not used more, but Cambridge station is capacity constrained because of its one-side design and I guess the Cambridge/London commuter traffic is more lucrative. It is only a single track line,apart from at stations, which also complicates matters. 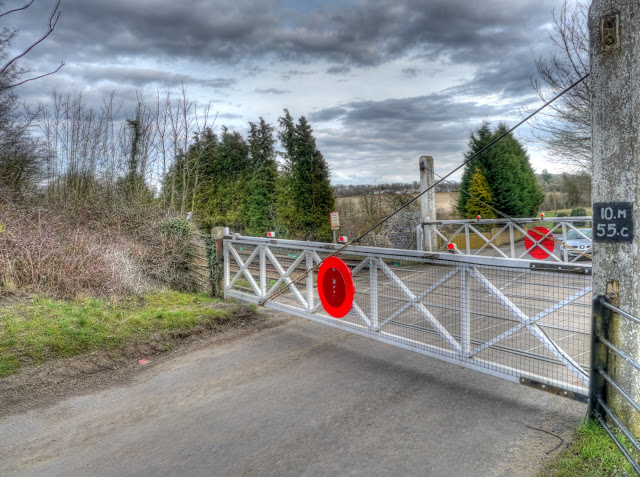 Here is the track and signal box - it all looks rather quaint, the modernisation of the railways has passed it by. Let's hope it does not get squandered though. Whilst looking on the web for information about the railway line through to St Ives that has since been turned into the CGB I did find a website ("end of the line for Histon Station") with pictures of the old railway installation which is worth a look for rail enthusiasts. I don't quite consider myself an enthusiast - I have never seen any interest in writing down engine numbers- I do like riding on steam trains though and it amazes me how extensive the old railway network was and how we have squandered such a valuable resource - whether it was for continuing rail operations, guided busways or cycle routes. A great website to check out is "Where's the path". You can use it to compare a current OS map view alongside a 1940s (or 1930s) OS map view. There were railways all over the place, no all that is left are the odd cutting.

I can also remember as a young boy seeing steam trains still in commercial use. I had to check Wikipedia to see when the Steam trains stopped - 1968. The working conditions were pretty harsh for the railwaymen involved with them. 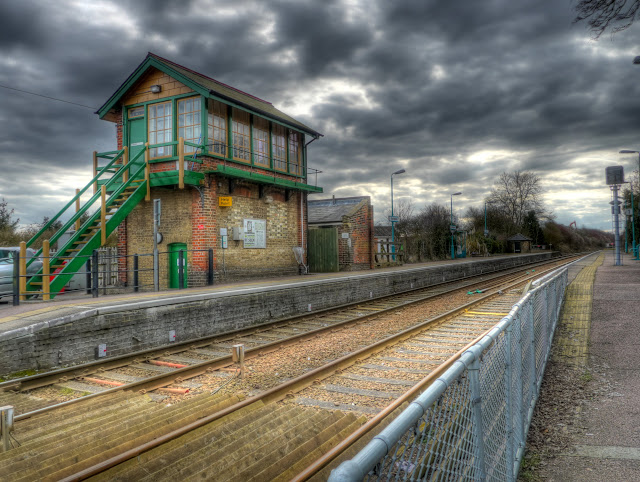 My route took me along some very quiet lanes through Balsham along to another very quaint village - HIldersham. It lies just off the very busy A1307 to Haverhill. The road has seen some nasty accidents along its stretches. The village itself is a bit like a time warp. There is even a ford to cross the river, alongside a more "modern" bridge for light motor traffic and of course pedestrians and cyclists. I have cycled though this ford before but not on this trip, despite the warmer winds blowing from the South I did not really want to run the risk if a slip on the slimy river bed. You can see that this ford is well constructed and looks well used. 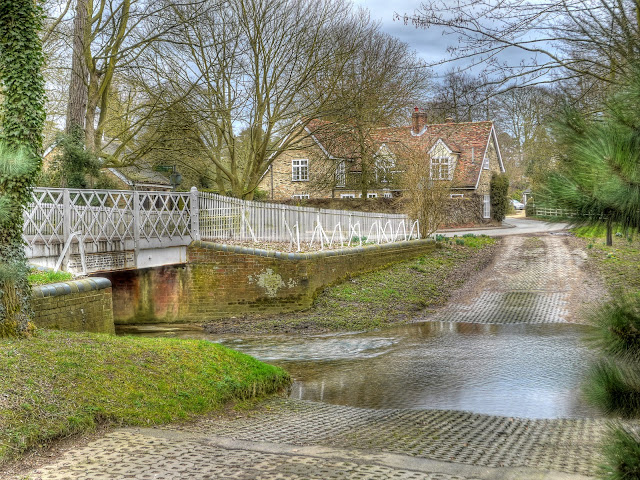 A view of the River Granta upriver. 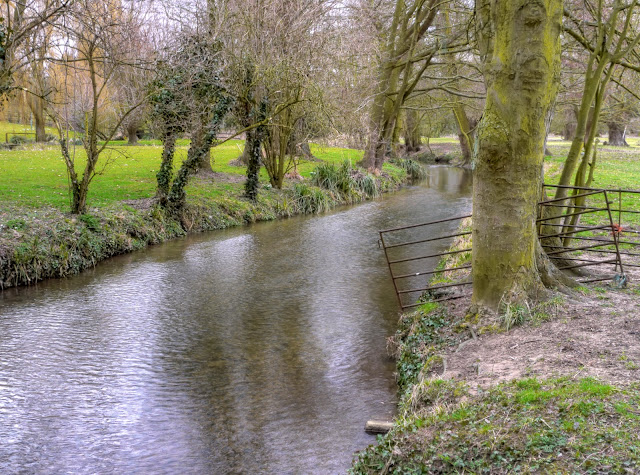 For the previous picture I crossed this "footbridge" to get a better vantage point - it wobbled a bit as I went over it - too much eating over Christmas! 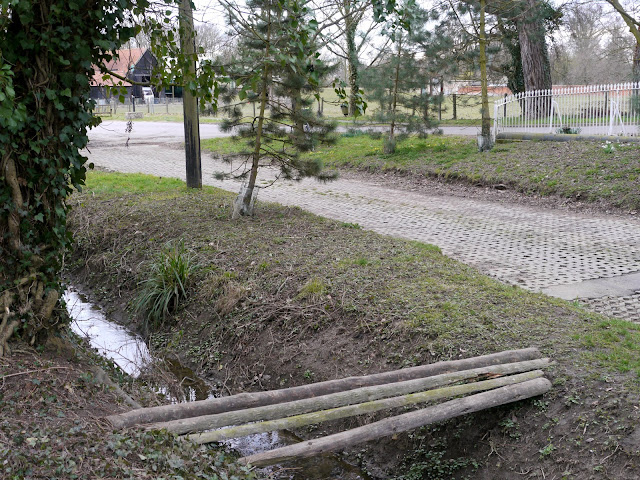 I crossed the A1307 - not a pleasant road for cycling along, although it appeared to have a shared use pavement alongside the road. Still not pleasant because motor traffic is very noisy when you are not sitting in the cocooned environment or a car or lorry. Try it some time you'll be amazed how noisy cars are travelling at speed. When checking out the map later I noticed that my route took me alongside yet another dismantled railway - the Cambridge, Haverhill and Sudbury Branch line. As far as I can see nothing has been developed using this old line. I then headed briefly along the A1307 just after it crossed the A11 before turning off towards Sawston. Actually the bit I joined was where the dual-carriageway became a single carriageway again. It was light - I had a red jacket and yellow fluorescent hat on - but there were cars who only seemed to overtake me just after they passed me. I guess the bottom line was they did not expect to see cyclists on the road and so were not looking and reacted late. I was also passed by a lorry carrying bales of hay - it was travelling quite fast and shedding large amounts of dust and bits of hay - one got in my eye. Fortunately I was able to remove it as I waited (for ages) to turn right of the main road. You can see why I like to stick to smaller and quieter roads.

I joined the Sustrans 11 route up through Sawston but carried along the A1301 up to Trumpington. This road is quite wide and has cycle lanes painted on the road. I passed quite a few cyclists using the lanes including a family with a trailer making good progress. One interesting "feature" is that although the Highway Code asks motorists to leave plenty of room when overtaking cyclists the on-road cycle lanes somehow give permission to pass cyclists much more closely. I imagine that in general traffic is going more slowly, but it does encourage motorists to consider it acceptable to pass close by cyclists. Certainly when I am driving I would tend to pass a cyclist more closely when there were painted lanes than when not. I think it is an example of the mixed message the motorists receive in terms of how to treat cyclists on the road.

On the Shelford Road (as this part of the A1301) is called I stopped to take a picture of what I presume is the route of the CGB down to Trumpington on the route of the disused LM & SR (London, Midland and Scottish Railway) from Cambridge over to Oxford. It looks quite narrow and I believe it will be a single track in operation here - there is quite a drainage ditch alongside. I wonder where the cycle track (if there is one here) will go. There is clearly a lot of work still to take place but they have a chance of catching up with the St Ives part of the CGB if they keep at it. There is also a road connecting the Park and Ride site at Trumpington with the Addenbrooke's Hospital site as well crossing the Shelford road. I assume that it will provide direct route for all M11 commuters to get to Addenbrooke's (those that want to of course). 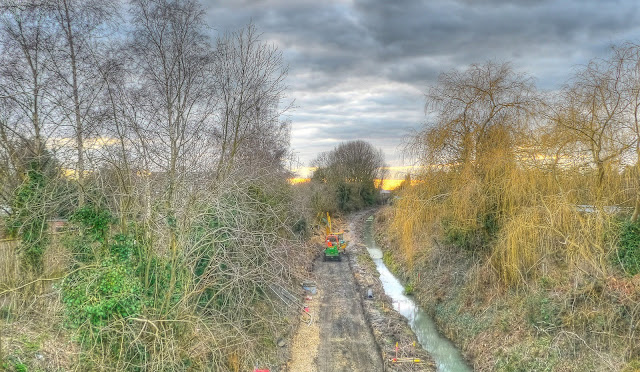 I then cycled along the Trumpington road into Cambridge. The first part is on road with dotted lines marking out the cycle lanes and then a shared use cycle path closer to Cambridge. As I was cycling down on the road a bus went past me and then dived into the kerb and stopped. It was a stagecoach bus as it happens. Why? Who knows; he didn't see me, or mis-estimated my speed, or was running late or just felt bloody-minded towards cyclists. None of those reasons give me a warm feeling about buses and bikes it is no wonder that many people cite the issue of danger when explaining why, although they would like to cycle they don't. The shared use path alongside the road here is pretty good (for the UK, not compared with Holland!). I then headed out to Coton along a shared route and stopped to take a picture of this house being re-thatched - actually there are quite few thatched cottages in these parts - the wet fens must have been a good source of materials? 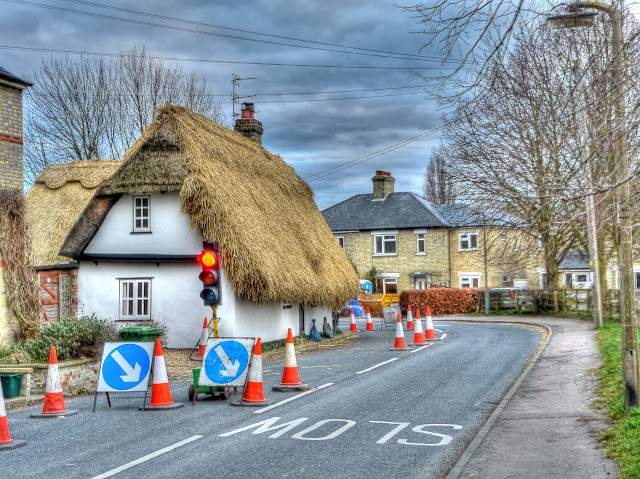 I did stop at these lights by the way.