An amble around Anglesey Abbey

This is a week for walking rather than cycling, as my Mum is staying for the week and for some reason has turned down my offer of going out on the Tandem. We have also been very lucky with the weather. It is definitely a bit warmer at the moment. Although as I write this there are forecasts of snow in England!). This means that the daffodils have started flowering and there are even signs of buds opening on the hedges and some trees. After visiting Wicken Fen at the weekend and picking up a free visitor ticket it made going to Anglesey Abbey even more pleasant. (Last weekend the National Trust had a free weekend for non-members and gave members who visited a ticket to allow them to take a guest for free during the next couple of months.)

Anglesey Abbey is near the village of Lode (a place I often cycle through) 9Km/5miles from Cambridge, it is owned by the national Trust and has some wonderful gardens and grounds to visit of around 114acres (from the NT website, Wikipedia claims 98acres!) along with the former home of 1st and 2nd Lords Fairhaven which the 2nd Lord gave to the NT in 1966 on his death. There is still some private accommodation for current members of the family.

I think that the Gardens represent a flagship for the NTs management and evolution of the properties they own. Over the last 25 years I have lived in the Cambridge Area it has gone from being a passive display to what was once Anglesey Abbey to a mix of the old, in all its former glory, and what might have been for gardens such as these in current garden design. Mind you I am not an expert on garden design, however there are areas that seem more contemporary.

What am I wittering on about. Well a more recent development on the property has been the Winter Walk. I have not been the Anglesey Abbey for a few years - you tend to ignore the sights on your doorstep and for me this visit was an eye-opener. The Winter walk is really quite stunning - and unfortunately my photographs do not do justice to it. In fact I have only got one picture taken on the winter Walk as the rest were bad. Mind you it has given me food for thought on how I might improve my pictures and as a member of the NT my visits are free (after paying the annual membership!) so there is no reason not to go back and have another go. Anglesey Abbey is famous for its variety and planting of Snowdrops - but these were over when we visited. What I liked about the winter walk was the use of shrubs and trees with different coloured and textured bark to create some quite stunning banks of colour. Here is one showing the use of yellow and red coloured growth. Elsewhere they had a plantation of silver birch creating an ethereal sense, which would look really good with a but of mist in the air (in photographic terms that is). 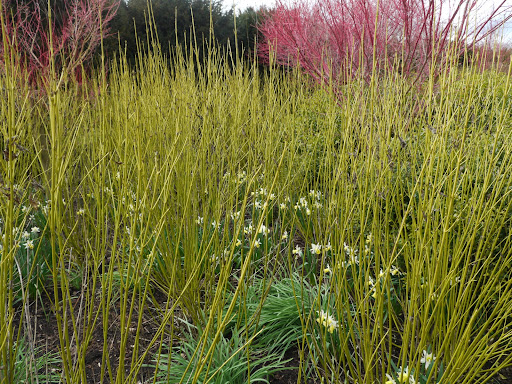 We have Imperial Crowns growing in our garden (Fritillaria Imperialis) which usually flower in late spring (April/May) and look quite unusual after the daffodils. We have orange and yellow varieties. My mother has been trying to grow them in her garden for a while with limited success, ours appeared after we had a conifer hedge removed and just seem to thrive. What was surprising was to see one flowering in the gardens at Anglesey Abbey. Even the later flowering spring flowers seem to be early at the moment. We have not got any Imperial Crown flowers in the garden - the plants are all looking good though. Here is the one we saw in flower at Anglesey Abbey - on our way out we discovered they also had them for sale in their Garden Centre. We did not buy any of those - we did buy some other stuff though. 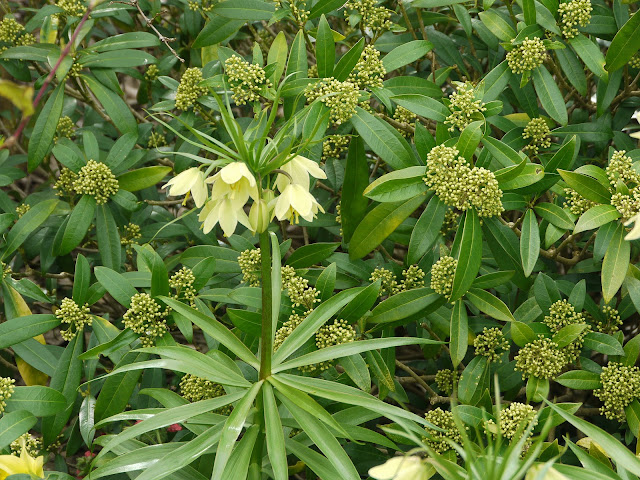 When visiting you have to get separate tickets to visit the house and I think they operated a timed system when it is busy. We wanted to walk around the gardens though to get some exercise as well as look around. mind you as the visit to the house was free we did pick up a House ticket as well. After the Winter Walk was passed by Lode Mill which is currently in need of repairs as they have a leak and have dammed the water from the mill so they can get in to fix it. There are some wonderful vistas which must have been planned and planted in the early days of the garden as the trees are now pretty substantial. Here is one such avenue, to rows of trees each of which has a carpet of spring flowers - or do they look more like rugs? 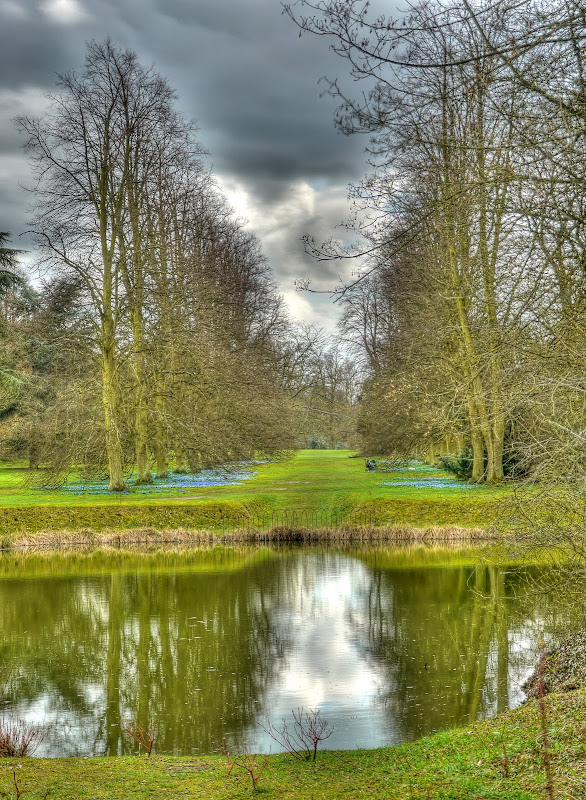 The garden has also got some interesting statues and pots around as well. This group looked as if they were part of a Doctor Who program (the one with the Angels - I think it was called Blink.) 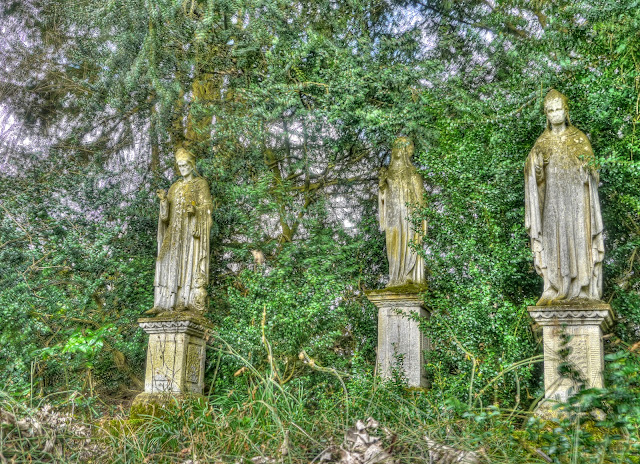 A different view of the "blue rugs" The house - it was a Priory and acquired in 1600 and converted into a house. The Priory dates from around 1100! 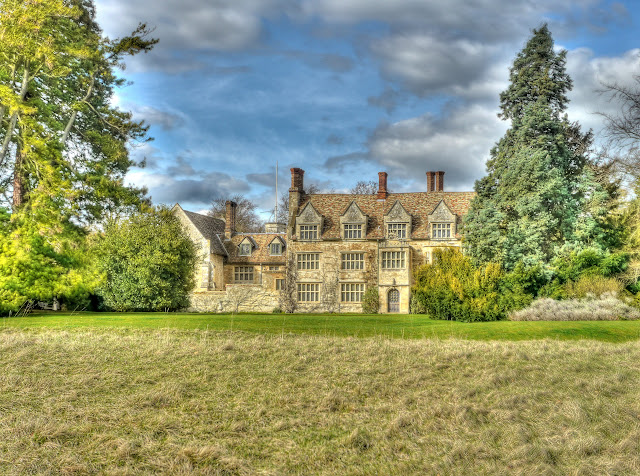 One of the many avenues - the gardens have some formal areas as well as less formal plantings. There a quite a few avenues that criss-cross and they often have a statue or large urn at each end. The trees looks as if they have been carefully shaped to maximise the effect in this picture. You can see half way along this one there is another avenue criss-crossing! It gets quite dark when the trees are in leaf. 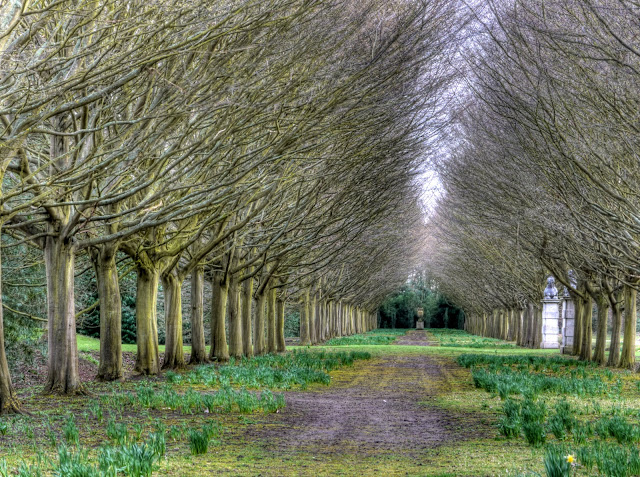 We walked down to another area I had not visited before - Hoe Fen - an area of woodland with some paths through that has designed to encourage insects and other wildlife. Although the car park was pretty full once we walked away from the main axis - entrance/cafe/House/mill we hardly saw anyone. In fact there were no other visitors in the Hoe Fen. On a map I noticed an Inset Hotel and though it was a small building on the edge - it turned out to be a Unisex toilet with its own cess pit - you don't get mains plumbing in the woods! The "Hilton Hotel for Insects" was a large pile of sticks and mud - rather more in keeping with the surroundings.

After visiting Hoe Fen we went back for our tour of the house - they supplied paper overshoes for visitors with muddy shoes. I think we were the only ones who had to wear them - it seems that most of the house visitors did not visit the gardens first. 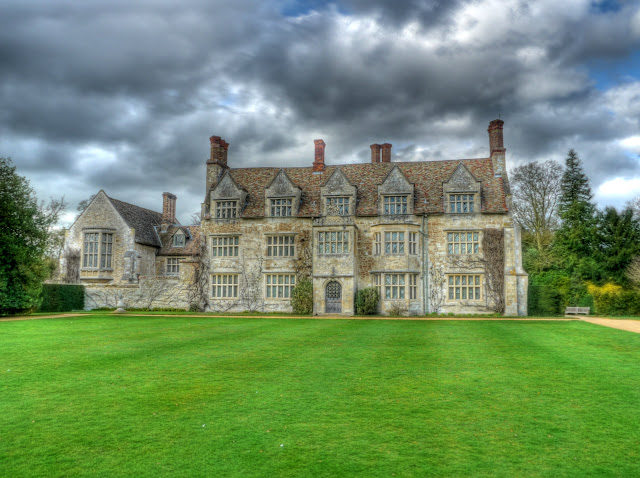 On the way back home the gloom lifted and there was some bright sunlight - and it started raining. We did see a really strong rainbow though - and we could see both ends - didn't see any crocks of gold though.