When I repaired the puncture on my Marin I found a large piece of flint sticking out of the tyre, pulled it out and because of the age of the inner tube replaced it and thought that was it. Unfortunately the rear wheel has started deflating again - a a slow puncture. As things go I did not get around to fixing it until Friday morning when I also had to go to London.

Now I have fixed loads of punctures over the time I have been cycling. Twice, I have had three punctures in a day. Once when cycling on my Tandem with my son and the farmer had been cutting a thorny hedge and the trimmings were all over the cycle path. The second time was returning from cycling up to Kings Lynn and back. That time was made worse because I had to fix the last puncture in the driving rain.

I know that with a puncture there is a cause and effect, tyres rarely go down in an unexplained manner. I say rarely because occasionally I will pump up a tyre and not have any problems with it - and that has occurred around twice during my years cycling as well. In those exceptional cases I put the problem down to dirt in the valve - although I have not evidence either way.

So when I took the tube out this time I spent ages looking for a hole, I eventually put the re-inflated tube in a bucket of water, but could not see nay tell-tale trace of bubbles. As I said it was a slow puncture with the tyre deflating over several days. I took the tyre off and ran my fingers around the inside trying to feel for a problem I checked both tyre and tube by eye. I could not find a hole and time was running out to catch my train to London. It was a nice day and there was no way I was going to use the car to get to the railway station. Mind you in today's economic climate the normally over-flowing car-park has had spare spaces the times I have caught the train this year.

So against my better judgement I replaced the inner tube again with a new one. The last one was not new and so there could have been a problem with it that I had forgotten to fix. I pumped the tyre and set off. It was so warm I did not need a jacket or jumper. In fact the warmth over the last couple of days has brought out the daffodils - which I took pictures of before fixing the tyre. The late "Spring" seems to have compressed the various early flowerings - so we have snowdrops, yellow and purple crocuses and daffodils all out at the same time. Here are the purple crocuses, now out-numbering the yellow ones. Although I have not included pictures of them are are also loads of snowdrops still in the garden. 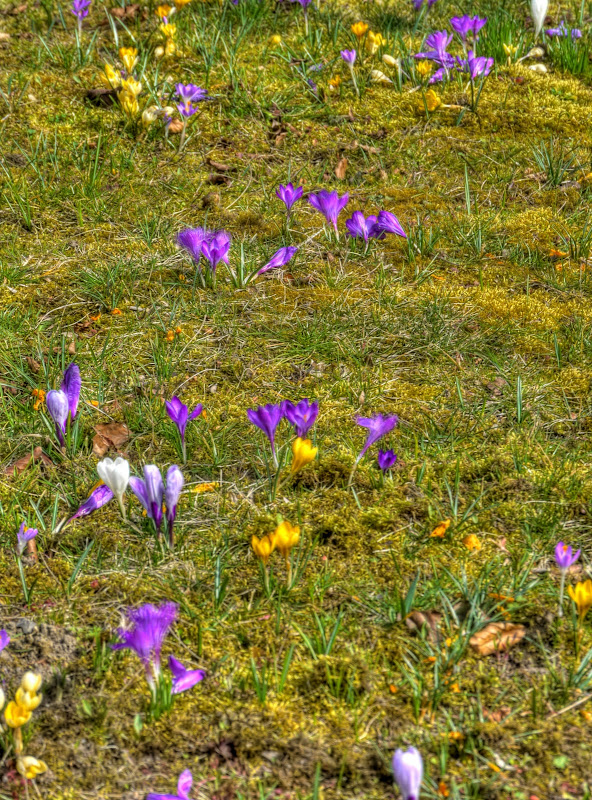 The daffodils - there was a bit of a breeze so my attempts at taking multiple exposures and creating an "HDR" picture were a bit blurry as the same flower heads appear as ghost images around the central image. So this is a conventional single exposure image taken just by the shadow of the hedge. It is surprising how quickly they come out once the temperature starts rising - it is probably more surprising that after all these years I have not twigged that daffodils do flower pretty quickly - after all I have seen it happen year after year. 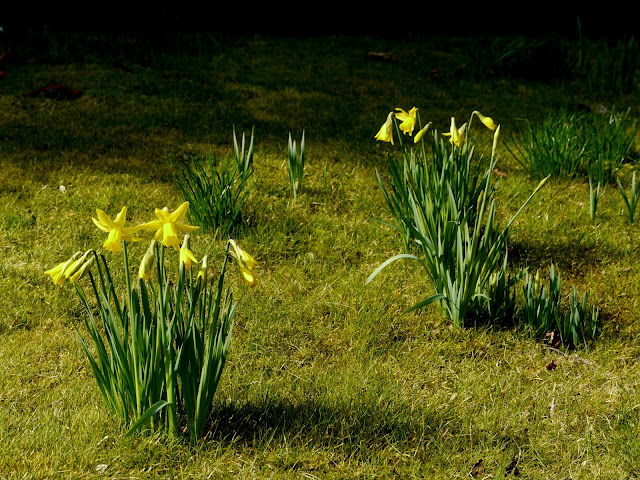 Once last picture of the purple crocuses and I fixed the tyre as mentioned above and set off for the station. As I thought - there were at least 10 car spaces, but I could not find any spaces in two of the three cycle park areas. Fortunately the cycle park adjacent to Station Road had a space. This cycle park has a muddy gravel base and several rows of Sheffield stands. However given the lack of sufficient cycle parking at the station all of the parking areas have more bikes locked up than two per stand (which is what they were designed for). There are also remnants of bikes left behind and where bikes have been locked to the edge of a stand they quite often fall down. Why does this matter - well there was a free space next to a stand that was difficult to reach as there were blockages each side - phew a place to lock the bike and still time to spare to buy a ticket and catch my train.

I there are several factors in the problem. Really the stands are too close together for bikes to be locked up side by side. Especially when the bikes have baskets - the spacing is the issue not the basket. As the cycle theft is so bad many people use very old bikes that they don't care about to get to the station. At the slightest sign of trouble I would imagine they abandon the bike. If you live close to the station then using a rotten bike makes sense. However if you commute form a reasonable distance then it is not such an attractive option - you don't want to intentionally make it harder to cycle - after all aren't we supposed to be encouraging more cycling, not putting off all but the die-hards. 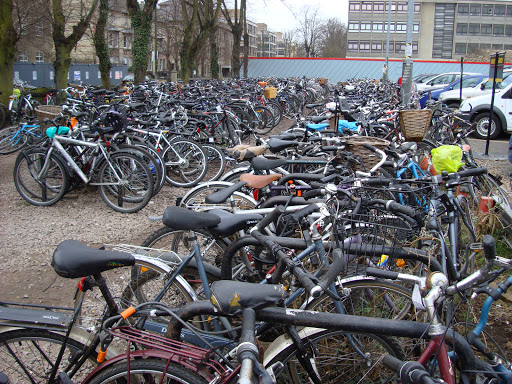 When I returned from London that evening it was dark - I was on the first off-peak service of the evening (7.15pm) which attracts a lot of customers. Unfortunately it had started raining - so trying to find my bike in an under-lit muddy car park whilst putting on a cycling jacket was not fun. I also had to stick on the lights and speedo and so by the time I was heading out of the station I had to wait for a stream of 20 or so cars to pull out. What added to my misery was they had all parked in the reserved spaces and were sitting in the dry I was sitting in the rain.

I set off - as always it is really pleasant to be cycling after being cooped up on the train. I normally take a different route home from the one I take in - there is less traffic around in the evening so I normally take a more direct route on the roads. The rain was not too bad, although I did have a car try force me to wait my side of the road was clear, his side had parked cars and he wanted me to wait whilst he carried on. What sort of car you may ask - yes a Taxi. I guess it is hard to make a living and so they feel the need to avoid any possible slow down on their journeys. The advantage of having bright front lights is that they cannot ignore me and so he allowed me my right of way.

After a few miles I realised that my rear tyre was not fully inflated - I should have known - if you can't find the cause of the puncture then it is probably still there! The saving grace was because I was worried about the tyre I had a pump with me and also an aerosol inflater that sprays gunk into the tyre as well as inflating it. The gunk then seals the hole. It is great as a get you there measure but a little annoying as the gunk seems to go all over the place. This time around I just pumped the tyre up and got home without any other problems. I really must sort out that puncture...

To end on a more serene note - another purple crocus. 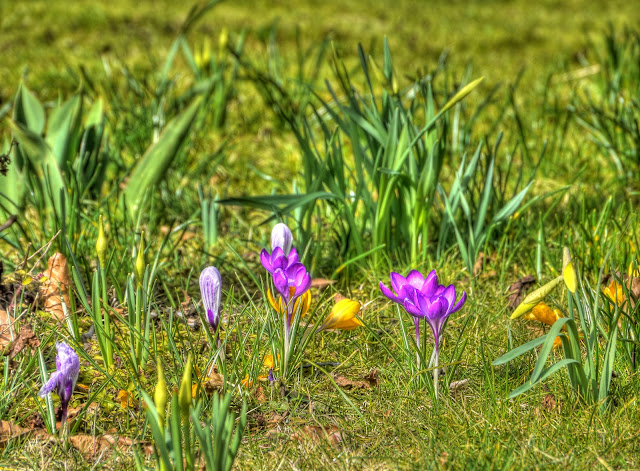 As has happened before, I also resolved to write a letter of complaint about the cycle parking at the station. I have never actually gotten round to that either!