The weather has maintained its record of changeability over the bank Holiday weekend with fine drizzle during the morning and rather grey clouds. I did not look at the temperature- but it was not too bad - OK for shorts and sandals, but I did wear a wind-proof/shower-proof in case it rained or drizzled again.

I had to start early in order to be back home on time for a family dinner so it was a fairly local cycle ride. Mind you with the gloomy weather I did not feel inspired to go far in any case. I left town on the High Ditch Road and then up Lower Fen Drove Way and the bridge over the A14. The last time I was here the drains covers were missing (well all but two). This time around cones have been used to warn bridge users of the holes in the road. This reinforces my guess that the covers were stolen. If this were Council piece of work I feel it would have happened more quickly and the cones would have been deployed as soon as the covers were removed. Still all credit to the Council for spotting it and getting some warning cones out. The bridge looks steeper than it really is from the picture. The sky was just as grey as it looks. 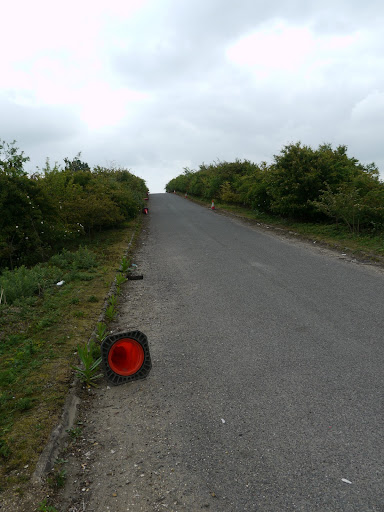 One thing about Bank Holiday Weekends is there are more traffic jams - people take the opportunity to go away over the long weekend and there are also more shows and events held. As I was cycling over the bridge this B-17 Flying Fortress flew by. Its engine noise was quite a low distinctive sound - coming from those four turbosupercharged radial engines, each developing 1,2000hp. With the power of the Internet (and the fact that there are not many B-17s left) I was able to identify this particular B-17 - Sally B. Apparently it is the last remaining airworthy B-17 in Europe and is based at the Imperial Air Museum, Duxford when not on flying duties. (So I must have seen it - I have been to Duxford a few times over the years.) Looking at the Sally B website it appears that the flight I saw was a Memorial Flight over the US Military Cemetery at Madingley. (Note the last Monday in May is known as Memorial Day in the US and is a federal holiday to commemorate U.S. soldiers who died in the military service.) Judging from the Sally B Calendar, this plane has a busy schedule and there will be quite a few opportunities to see it flying over the year. 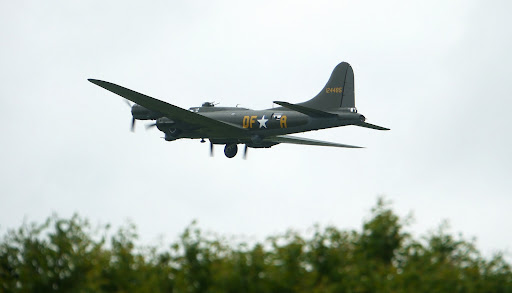 Following Low Fen Drove way round I came to this bit of graffiti - quite visually striking in the middle of the countryside. It makes me wonder how some "vandal" happened to be out this way and then decided to spray the building. My guess is that there was a bit of either joy-riding or perhaps the owner of a car allowing some one else to have a go. The wind blowing the leaves whilst taking the multiple different exposures creates an unusual effect with the leaves almost being uncomfortable to look at whilst the graffiti is static. My sister finds these HDR pictures to be a bit weird to look at - I like them for their vibrancy and the way in which they create odd focus planes in the picture.

Near where I took this picture someone had tipped rubbish right in the middle of the track. It had been inspected and a note left asking for any witnesses to get in touch. This time around it had gone. The council really does a pretty prompt job of keeping our countryside clear of rubbish. Perhaps the team who do this should have run the Guided Busway contract! 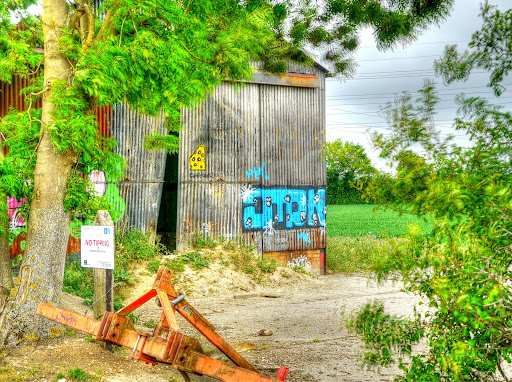 When I joined the Horningsea road - the new shared cycle/pedestrian pathway has been tarmacked between Horningsea and the bridge over the A14.All it needs now is some paintwork and signposts - I wonder if they will put lighting into the path (like the Newmarket Road cycle path). This road does not have lamp-posts so does seem to be a good candidate. 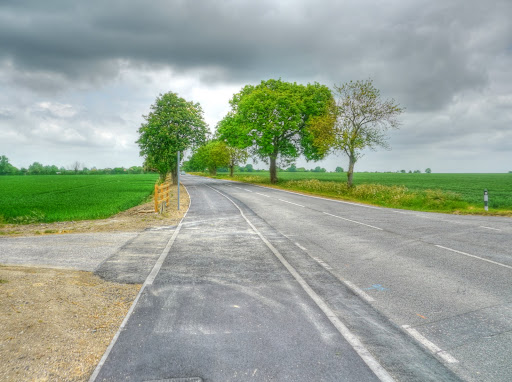 Looking towards Cambridge a good stretch of Cycle path. Where the bridge crosses the A14 there is a partial junction allowing cars on and off the A14 from/to the West. There are lights on the A14 exit, so when you cycle up here towards Cambridge the lights do halt the traffic (leaving the A14) which allows the cyclist to go past. What amazed me is that there is a tarmac path that carries on across the bridge and I have never noticed it before.

The challenge lies at the next bit of the junction on the far side of the bridge. Here traffic from the Horningsea road can join the Westbound A14. There are no lights and even on a Bank Holiday Monday it was not the easiest junction to cross. 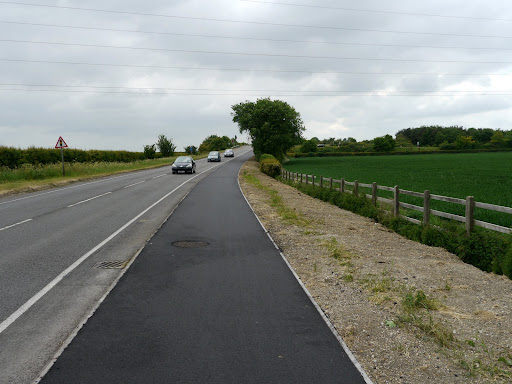 I cycled back towards Fen Ditton and then down the High Street and onto Green End. This is a"No Through Road" but there is a byway that lops back onto the Horningsea Road that I have never used before (The byway is called Field Lane). At the crossroads of the High Street and Ditton lane (as the Horningsea Road is called at this point) there is the customary village sign. This picture shows why my sister finds the "HDR" approach a bit much sometimes. I was holding the camera for the multiple exposures and I was not holding it very still by the looks of things. It nicely pops the sign out of the picture - but even with multiple exposures the sky was too bright and so flares up behind the sign. (I took this with three exposures - not enough it seems.) 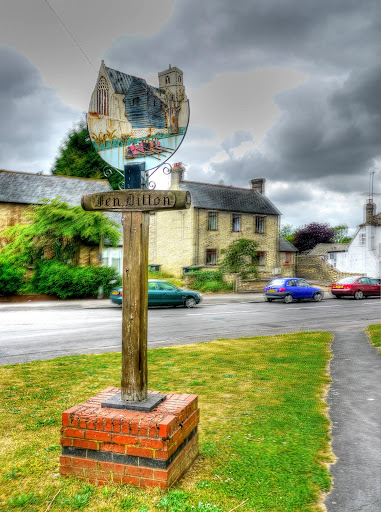 I then headed back up towards Horningsea - as you can see the cycle track has been surfaced all the way to the village. 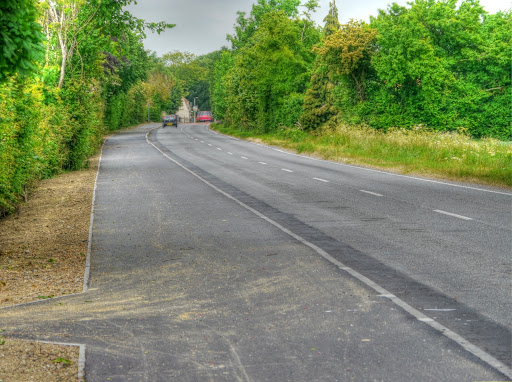 There was not much (different) to photograph on the way round towards Wicken and back - although the Wicken Fen NT Reserve was packed. The car park was full and there were loads of people in the Reserve and walking along the Sustrans 51 route alongside Monk's Lode. It seems that the NT was also running trips up Wicken Lode. 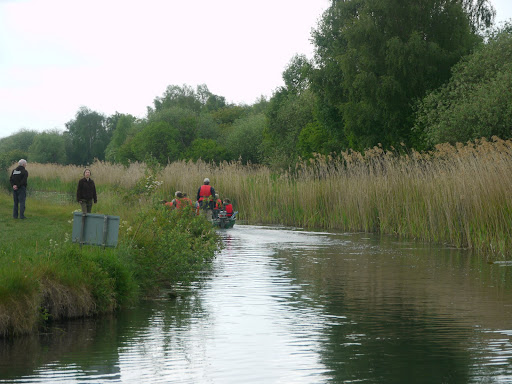 On the way back through to Cambridge (via a few tracks and White Fen) there are quite a few poppies out - this is the Common poppy (Papaver rhoeas). It has flowers that are 6-8cm in diameter with 4 papery overlapping scarlet petals. The flower is notable for growing in arable and disturbed soil. Which is one reason it was chosen as the flower for Remembrance Day (also known as Poppy Day). The reference comes from a Canadian military physician, John McCrae's poem In Flanders Fields 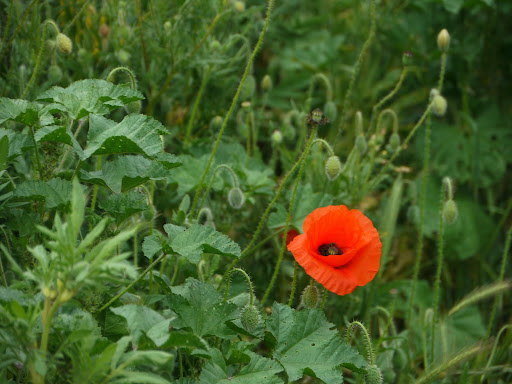 Growing alongside the poppies was the Common Mallow (Malva sylvestris) - Like the Common poppy it favours disturbed land (and verges) and grows to a height of around 1.5m. The flowers have around 2.5cm to 4cm in diameter and have 5 purple veined pink flowers. When looking it up the other option was the Dwarf Mallow - but it has smaller pale lilac flowers of around 1-2cm diameter. 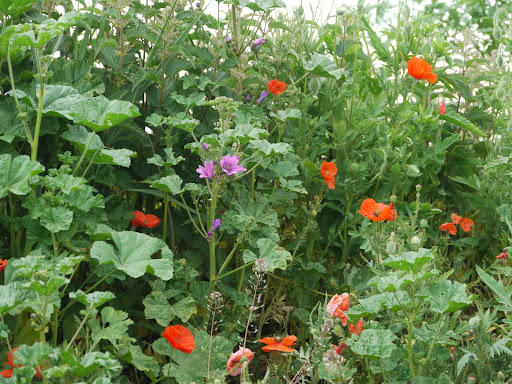 Not long after stopping to take these pictures, as I was leaving the other side of White Fen, I think I embarrassed a female cyclist who must have thought it was so secluded that she could stop for a wee (comfort break) by the grass verge. Her bike was halfway across the "road - track really". Still no harm done - and if you are reading this I apologise.

When I got to the end of White Fen Droveway I turned right (not the way home) to see where Commissioner's Drain appeared. This is it - it looks much less formidable than nearer to Wicken Fen. Although that might just be the growth around the ditch. 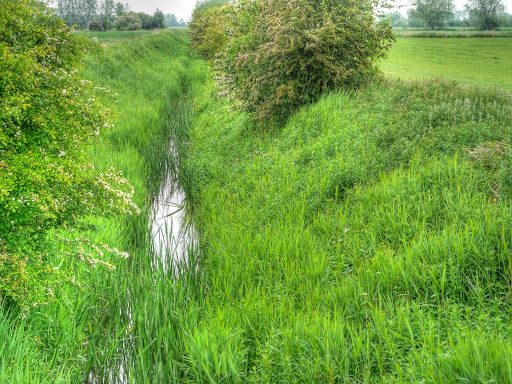 The drain looks even less visible looking towards Cambridge. I think it crosses under the road and Bottisham Lode through a "tunnel" - a large pipe really. (Bottisham Lode is the water in the foreground of the picture.) 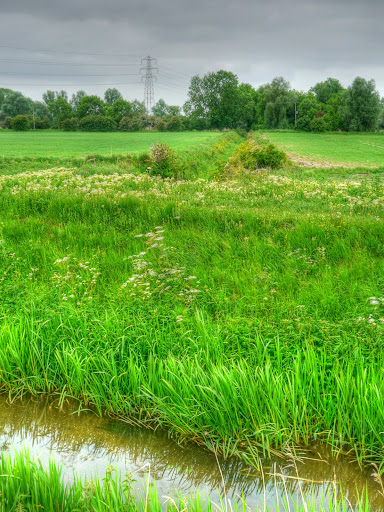 I then headed back the right way towards Cambridge (via Lode) - I should have waved to the lady cyclist as I went by - but us Brits are too reserved. I do normally wave, say hello and sometimes stop and chat with fellow cyclists - but not just after they have had a comfort break!