The last few days have involved meetings in London and Cambridge which meant smart clothes and working to a stricter timetable than I normally have to when working from home. When I am off to London I usually cycle to the station and then park my bike there - I do have a Brompton but generally only use it in London when I have a pretty good idea of where I am supposed to be heading. When cycling to the station I always try to go slowly as I generally do not have time or anywhere to change into work clothes - it mostly works but there have been times when through being a little late I have had to cycle quite hard which to catch the train which means the first fifteen minutes sitting on the train can be a bit uncomfortable as the sweat dries. It is even worse when it rains. I normally carry a shower-proof yellow cycling jacket and waterproof leggings, as well as a few tools to repair punctures. I also have an aerosol can which will both inflate the tyre and seal the puncture - it gets a bit messy but is quick "get you going solution" when there is no time to fix a puncture. having said that I have not really suffered many punctures commuting to the railway station.

What does irritate me though is that if I am catching a mid-morning train (cheaper providing you don't want to return between 4.30pm and 7pm) then it becomes very difficult to find a bicycle parking space at the station, yet there are often car spaces, except if I drive to the station then the car spaces always disappear. If I am returning before about 6pm then I leave my bike at Station Cycles who for a small fee will keep it secure. Unfortunately I am not always able to return before they have closed. In fact I have had to carry lights with me as I returned at around 11pm on Tuesday - it was very pleasant cycling back through the town in the dark and quiet roads. I generally carry two front and two rear lights as well for backup. The cycle paths in and around Cambridge need respect at night. I think that the cycle paths are sometimes more dangerous at night than the roads as it is harder to see the problems like overgrown brambles. (The Station Cycles website also linked to this Mystery Shopper article sussing out some of the bike shops in Cambridge - I generally use Chris's Bikes and Ben Haywards)

TGIF - no scheduled meetings so I was able to pop out around the Fens today and the weather was really pleasant with some warm sun. As I passed through one of the local villages on the Sustrans route 51 there is a shared pavement/cycle path. I generally do not use it - it takes a tidal flow of cyclists to and from the local school but is quite a narrow path. 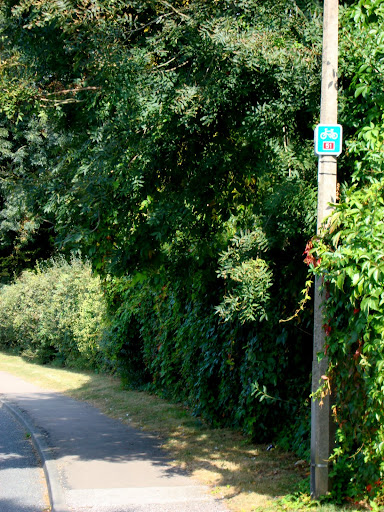 This is one of the other reasons I find this type of path irritating - great news for drivers of cars and vans - it is multi-use cycling, pedestrians and yes motor vehicles. Hopefully the vans will also dig into the pavement surface and create a few lumps and bumps to slow down reckless walkers and cyclists - can't have them speeding when there a precious vehicles parked on the path eh? These were working for EDF and seemed to have stopped for a lunch break and where eating their sandwiches - good to see that French influence (EDF - Electricite de France) encouraging appreciation of food - I did not see any wine though. 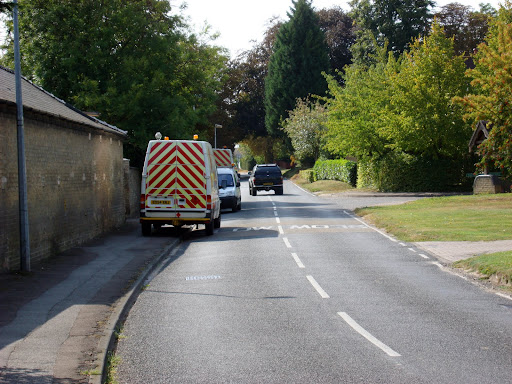 Once out into the Fens I was once again asked to respond to a Cambridge Council/Sustrans questionnaire on the new-ish route through White Fen. It is a lovely route, but not well signed and incomplete as it is intended to get through to Wicken Fen avoiding some of the single track roads through to Upware. Some of those roads can be a bit intimidating for inexperienced cyclists (actually not just inexperienced cyclists) as boy racers seem to delight in whizzing past with almost no room to spare. Certainly not a road I would take a young family out cycling on. So it seems to me that the Survey is perhaps a little early - apparently the Surveyors had only seen three cyclists through that day. Since the route is incomplete and so does not really go anywhere and it is a scenic route then I am not surprised, that not many people visit on a Friday - last week I saw far cyclists and walkers more out and about - I think they will be there tomorrow so perhaps I ought to re-visit.

I passed this field with an edging of sweetcorn - it is common around these parts as it is grown as a cover crop for game birds. It can be a little disconcerting to cycle past a field with around 30 shotgun wielding people blasting away. 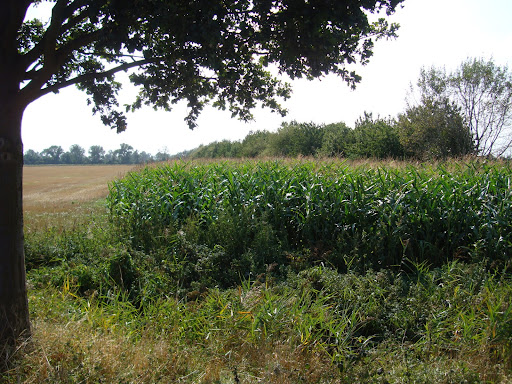 I also passed some more sunflowers , on the edge of the village is a field where flowers are grown - and I think they grow them to harvest the seeds as they are allow the flowers to go past their best. 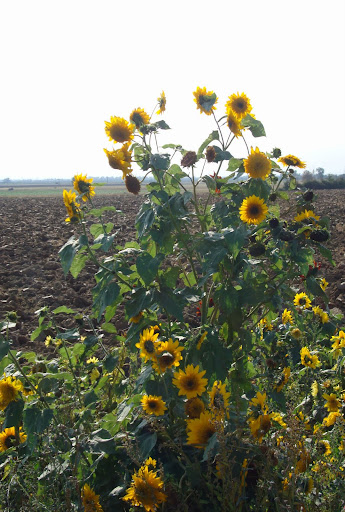 A sunflower in the blue sky. 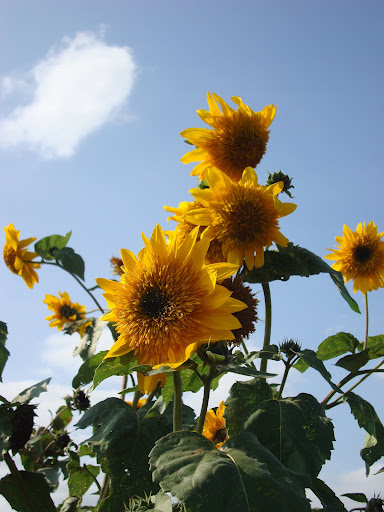 All in all a great day for cycling and the wind was behind me on the way home.