Shaking off Jetlag - 1st puncture in a while

The weather is not very inviting to cyclists (well me anyway) at the moment. It is not just the contrast with the last few days of cycling in Oregon, with the warm sun and blue skies and surrounding mountains. It was also pretty winy today and there were spots of rain in the air. However I find that a good way to get rid of jet-lag is to get exercise in the "sun". If I have returned from the US then the best time is in the morning and if I have returned from the Far East then it helps to go out in the afternoon. Today I had no choice work had to be done so I popped out later in the day.

Although it might not have been cycling weather there were cyclists out - including this chap who I passed a couple of times - not because either one of us was fast, I took a somewhat roundabout route. At this point I was on the cycle path - but you can see that cycle paths are of little use to people who pedal trikes. They tend to be to wide and wibbly. You could imagine the uproar if most roads were built to small for 4x4s. It looks as if this chap was camping. I should have rode alongside and found out more - but at this point I turned off. 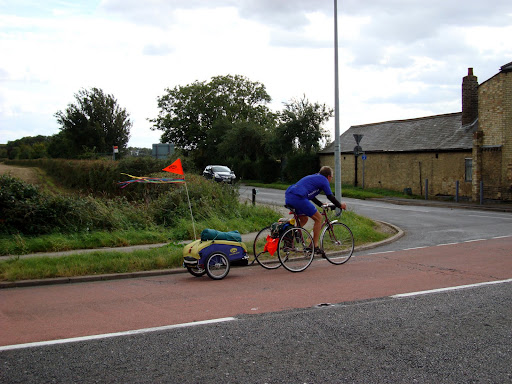 Most of the harvest seems to have been completed and so it it time for farmers to turn their attention to other things - such as seeding the road with lots of sharp thorns. I had my first puncture in around 4,000Km / 2,500 miles - as soon as I passed the tractor slashing at the hedge I did wonder if I was being a bit foolish - it was only a short stretch of road 200m long before I turned off - but after a couple of kilometres the back (of the bike) started going wibbly. Fortunately I was able to stop and sit down whilst repairing the puncture as there was a convenient bench.

It was the rear tyre, I could have fixed it on the bike, but it was pretty easy whipping the wheel off and then lifting the tyre of one side and slipping the appropriate bit of inner tube out and patching it. In fact the most difficult bit was removing the thorn which had jammed in. 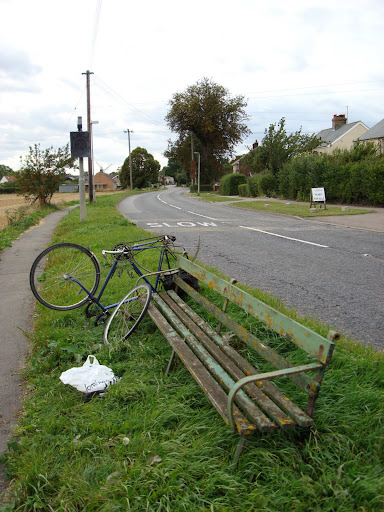 I was reading that the National Trust were thinking of of running some sort of boat taxi up to Wicken Fen from Cambridge. It would help reduce the number of polluting boxes that hog the country lanes and enhance the experience of the Fen. This is not one of those taxis - but shows how grey the clouds were - I did think I would get wet - but the rain held off. 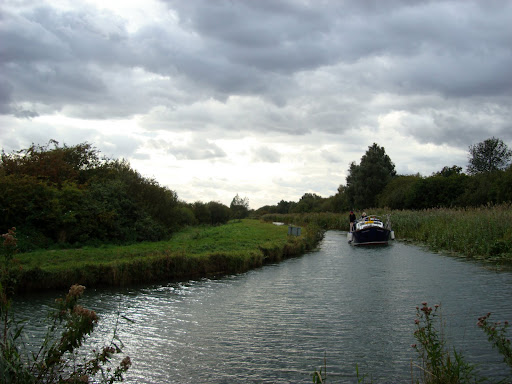 The smell of onions was strong in the air - I passed several fields being harvested - in one case the farmer was lifting the onions to the surface by a tractor for picking - this field was using the conveyor human-locust approach - although it was after the end of the working day. Actually these might have been leeks by the look of the picture. In fact a "zoom" of the picture shows that they are leeks. 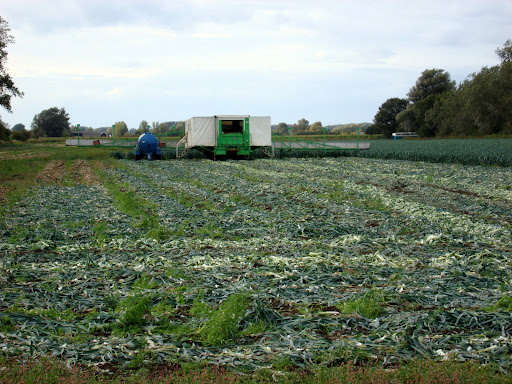 Despite the weather it was good to get out and the weather was not that cold - around 22C.