I do wonder how safety is perceived nowadays. As part of Cambridge's role as a Cycling City various plans are afoot to put in various cycle ways and path ways. The notable thing is that unlike Sustrans routes which can meander and sometimes err on the scenic side these routes are intended to be working routes. One such plan is to put in a cycle path/foot path from the village of Milton through to the village of Impington. Two adjacent "necklace" villages. The reason for the cycle path is that it would provide a route for schoolchildren in Milton to cycle to the Village College in Impington. The distance is around 2 miles, which is under the 3 mile limit for the provision of a free bus service, but because the current route is deemed dangerous a free bus service is provided anyway. The route follows a country lane -, but it is dark and has no pavement for three quarters of its length.

Assuming a cycling speed of 12Mph, which seems reasonable for the 2 miles as it is flat then the journey time is around 10 minutes, quite a pleasant cycle ride which is probably not much slower than taking the car and going a slightly longer way, compared with the path. Just the job you might think - a bit of exercise to blow away the cobwebs and be ready for the school day. However it turns out that many parents are complaining that if the cycle way is built, then it will mean that the "free" bus service will be removed so they will be forced to drive their children to school - thus adding to the traffic congestion and pollution as compared with the free bus service. It would seem that many parents are not comfortable allowing their children to cycle along a path to and from school and consider it sufficiently dangerous that they would be willing to spend real money to ferry them their by car instead. It seems that we perceive the danger of the cycling along the route as high whereas we disregard the problems of obesity (which is linked with diabetes and heart disease in later life). Perhaps we need to have adults taught how to critically analyse data to ensure their decisions are informed and rational. Mind you here in the UK there is a lot of fuss about the need for enhanced checks for anyone remotely involved with children - some estimates (an article in the Times) indicate up to 1 in 4 adults will need a CRB check and that the check will might include allegations as well as actual convictions. The approach seems almost treat all as suspects in order to catch the few who are and feeds the paranoia.

After the wonderful weather on Saturday things were looking up, there were even reports of a BBQ Autumn in the press as I wended my way around the Fens there were loads (well 27) other cyclists out and about. There were families taking advantage of the traffic free bits around White Fen, Lycra-clad cyclists out training and I also saw a group of foreign students out en-masse (well 7) getting to know the English Countryside. Pretty much all said hello as we passed each other - the good weather brought out the courteous manners, I even overtook a pony and trap. So obviously this BBQ Autumn could not last, almost as soon as it was reported on in the press it got jinxed, by Sunday the weather was dull grey and by comparison cold.. Mind you things are still growing in the fields. 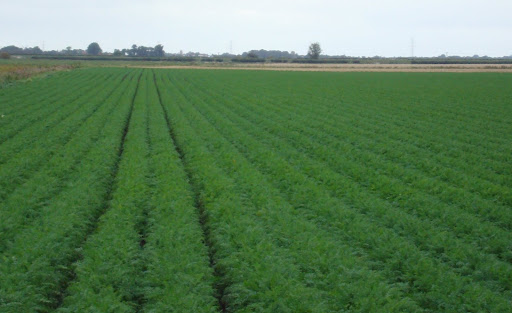 I also passed a field where the margins had Oil-seed Rape growing, I think as a cover crop for the game birds, although this picture looks as if all of the field has been cultivated it is only a trip alongside one edge.

There were also a few errant Sunflowers growing at the edge of the same field, a remnant of a previous years crop, either grown as a cover crop or for the sunflower oil. 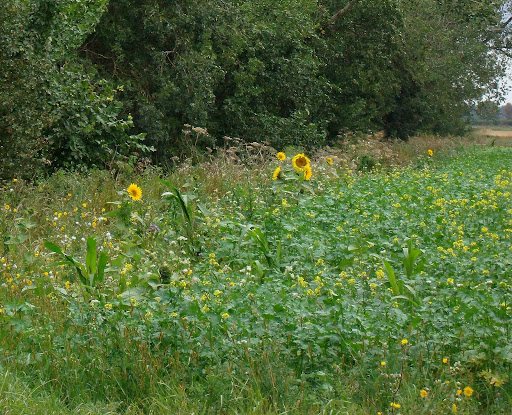 Mind you I did see 10 bikes, 11 cyclists out, a tandem accounted for the difference in bike/cyclist numbers.