Another week– another ride up the Cambridge Guided Busway (cycle path)

Tuesday, July 19th: This is not the most logical of routes. First I head East out of Cambridge and then virtually double back past Stow-cum-Quy Fen on bridleways. I then head back into Cambridge on the towpath alongside the River Cam (a leg of NCN11 that just stops). The I cycle up to St Ives and back on the 90% high quality path on the Cambridge Guided Busway (CGB).

Why, well the CGB route on its own can sometimes be just a bit shorter than I would really like. This adds a rather pleasant chunk of good bridleway/byway riding through the Fens and a rather pleasant ride along a river towpath.  In total the route length is 65Km/ 40 miles and flat. For choice I prefer gently undulating countryside to add just a bit more variation into the mix., but you can’t win them all. Here is the Bike Route Toaster link to the map shown below. (The comments on the map are from a previous ride – but still true apart from the “change of mind”. This time I intended to take this route. I was going to return from St Ives on the current NCN 51 route through villages such as Swavesey, Longstanton and Girton. I didn’t though because I didn’t want to face noisy traffic, even country lane traffic.

So there you are I break my own rule of never returning by the same route I go out on because actually the CGB route is high-quality. Yes it could be even better, but hats off to those that got us this much. I am sure that the Cambridge Cycling Campaign plays a hugely important role in making our local politicians aware of the significant benefits of cycling in this region for both leisure and business.

At the moment the Achilles heel of the CGB is how you get from the North chunk through to the South chunk, but even that might be more likely with the completion of a feasibility of the Chisholm trail. In fact I for one would like to see more focus on joining the dots – connecting the cycle routes to make it easier for cyclists of all abilities to use them without having to resort to noisy and strange roads. Just as you wouldn’t connect two Motorways by a country lane neither should good cycle routes be connected by a hodge-podge of kerbs, give-way signs and footpath barriers. (Which is what some cycle routes are.)

Some of the other problems cities have are the speeding motor vehicles so I am pleased that the Cambridge City Councillors have backed an approach to make the 20mph speed-limit city wide. It will need enforcing though and please, enforcement is not a war on motorists, it is about safety, the roads are all of us to use. The other blight on the streets is the amount if illegal and pavement parking that goes on, the law is not as clear as it might be – “Are vehicles allowed to park on the pavement?” highlights the inconsistency. However it is possible to do something about it as they did in Charnwood in Leicestershire with a “Cars of pavements campaign”.

The trouble is transport planning is also a political issue with points scoring and too many dinosaurs stuck to the idea that cars are for ever.

Whilst looking for some information on the Web I found this village website for Haddenham with a letter of objection to a development pointing out that  “official” assumptions about what distances it is reasonable to expect a cyclist to cycle are just too low. Hear-hear, I am in no way uber-fit, and am a bit over-weight, however the beauty of the bicycle is that I can easily contemplate rides of 50-100 miles (80-160Km). Why, well I have the endurance, but more importantly I cycle often enough that my bottom is accustomed to sitting on a saddle for a few hours.  Now I am not saying we should commute 100miles a day on a bike, I certainly wouldn’t but cycling is a fun activity and not a chore.

As I write this it is the London to Cambridge Bike ride  today, with some local companies taking part, and a lovely day for it too. Perhaps I’ll put my name down for the Cambridge to Norwich ride on October 2nd - it will be something to “train” for. 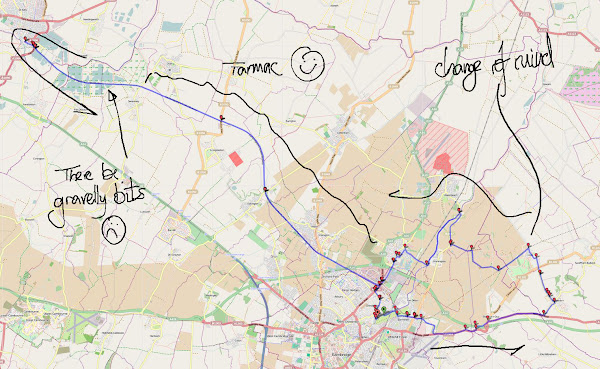 As I have been along this route recently I have included fewer pictures, despite the clouds it did not rain and was pleasantly warm for cycling (in a t-shirt, shorts and sandals). There are few things that can beat cycling along a decent farm road though the Fens. (Well there are really, but you know what I mean!) The skies are huge, the fields are enormous and there are no cars!

The ride back down alongside the River Cam was pretty reasonable although the Bumps preparations had started. I passed equal numbers of cyclists and walkers until I got back down to Cambridge. With the end of the Summer term there were more young people about, who having finished exams were starting their Summer Hols early before moving onto the next chapters of their lives

Having cut through Cambridge from the river to the start of the Northern section of the CGB on Milton road there was a depressing sight. What is it, middle aged-men with small penises drive sports cars and young men wsp get drunk and smash glass. What a plonker, I wonder if the cameras recorded it.  That’s our tax money being wasted and with VAT that means pretty much anybody who buys stuff. (I know there are exemptions – but we all contribute.) 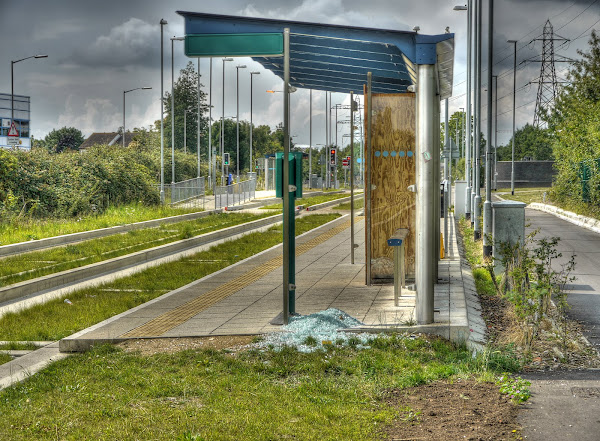 The yellow flag fairies have been busy, although you can’t really see the small flag over on the far rail.  I did not take picture of all of these repairs, it does look as if someone is being pretty thorough. This bit is where metal guide rails are used to make it easier for guided buses to line up and join the concrete tracks. 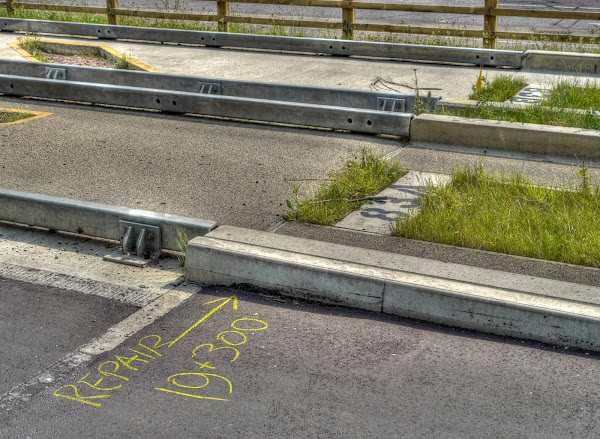 How about that then, black tarmac for cycling on, stretching on through the fenland countryside. I might be less enthusiastic when the buses are running but at the moment it really is good. In fact the only annoying noise is the buzz my tyres make when cycling. I use Schwalbe Marathon plus tyres. They are a good compromise of puncture-proof-ness, comfort and speed. The small amount of tread does buzz on this flat black tarmac surface though. (And no I don’t get anything in return for recommending the tyres.) 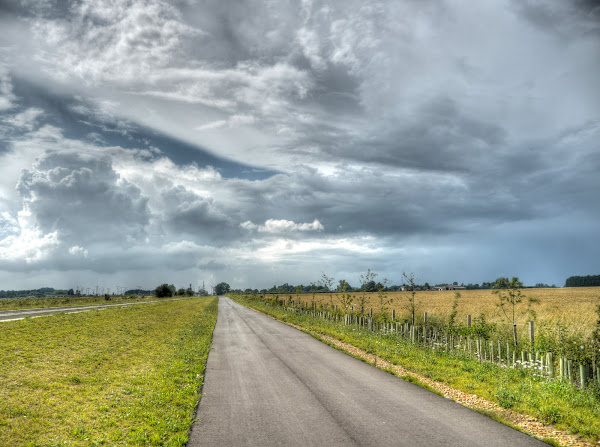 The eco-friendly Park & Ride waiting room at Longstanton seems to be making good progress. In case you were wondering there are 350 car spaces and 50 bicycle spaces here. I can’t help feeling that maybe we might have tried to encourage more cycling, surely a cyclist should be rewarded for her/his smaller carbon footprint. 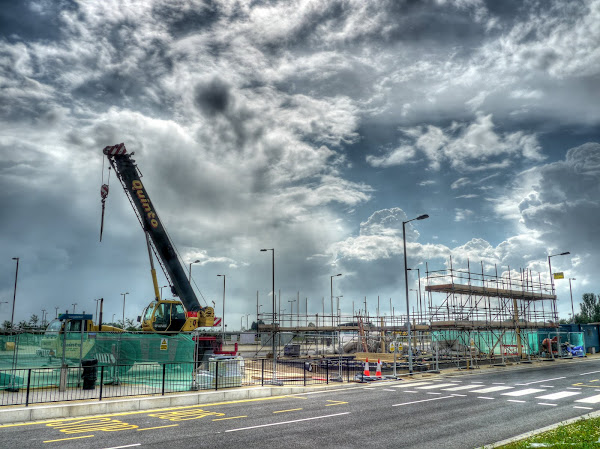 The smaller bus shelters alongside the track seem to be getting a make-over with various pictures – perhaps this helps to strengthen the glass and make it less of a target for mindless vandals. 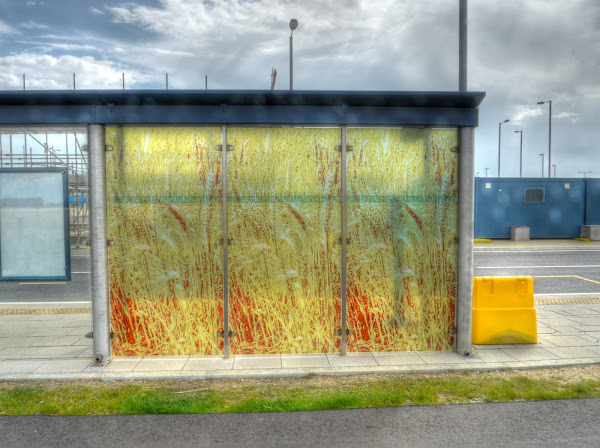 The last time I cycled this way I mentioned this bridge – Windmill Bridge.

This is the plaque  at the CGB level commemorating the designer – Iain Roy McCulloch. 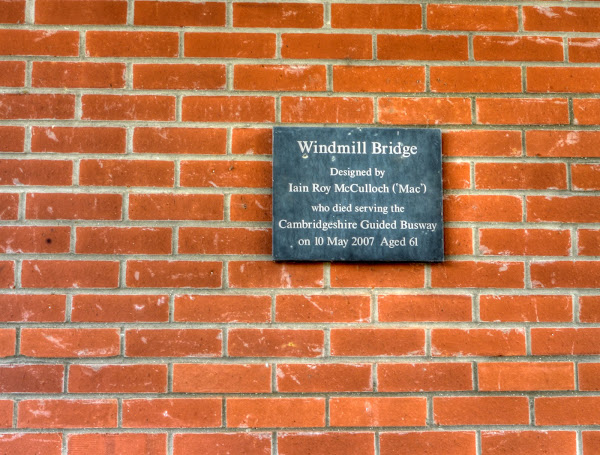 The CGB cycle path is still gravel from Swavesey to St Ives, although it will have a tarmac surface in the future – and the flooding problem will be eased, although it it still expected to flood for a few weeks in a typical year!.  Whilst I like smooth tarmac for cycling along I wonder what provision will be made to grit the surface in Winter – smooth tarmac, ice and bicycles don’t go together very well.

The work to repair this section of the cycle path is due after the opening, however I wonder whether this grit is for those repairs or something to do with the Fen Drayton Reserve? 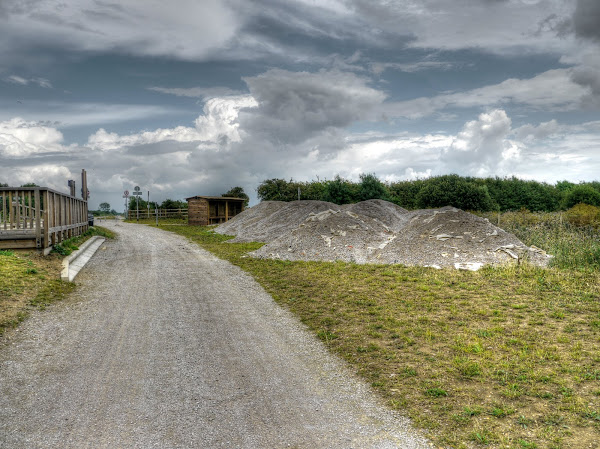 The work on digging drainage trenches for the not slopey enough Park & Ride car park at the St Ives end is also proceeding apace. There were quite a few contractors working busily. In fact there is quite a lot of work in taking place on the CGB. I must have passed several gangs out along the track doing various things. Although officially the CGB track and path are both closed they contractors didn’t seem to make an issue of cyclists and walkers.  Despite the recent accident where a cyclist fell into the path of a Guided Bus from one track to the next I also passed one cyclist using the concrete track. It was at the St Ives end where the cycle path is rather unpleasant and probably awful on a racing bike with skinny tyres. Still it seemed a bit foolish. 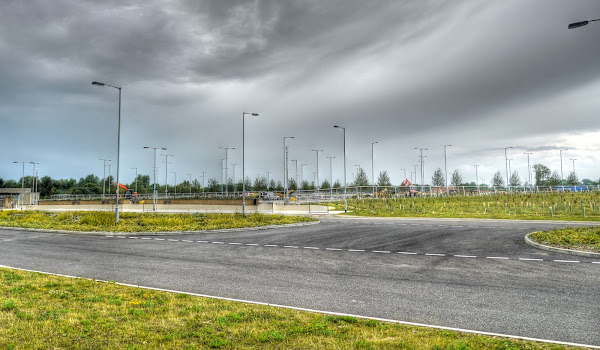 One of the lakes at the St Ives end. 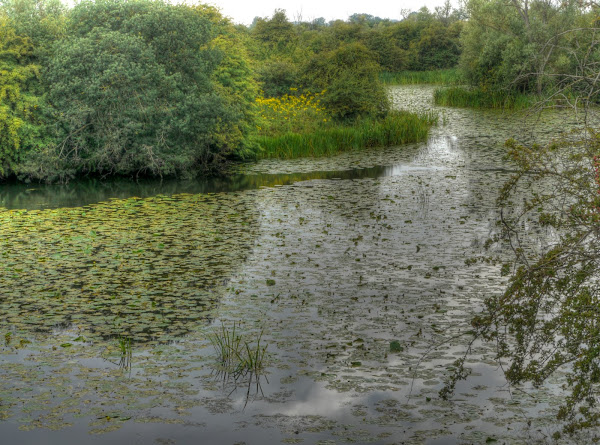 Another repair, I seem to remember reading that there were issues with the spacing between the concrete beams. There need to be gaps to allow the beams to expand and contract with the temperature. It will be interesting to see just how much maintenance this track needs. If you have ever cycled around the fens you will see how the roads buckle as the ground underneath is pretty soft. I hope they  have gotten their calculations right for the track.  For those who will say of course they have just look how badly wrong they got it with the level of the cycle path and how it floods for what seems like most of the year. Here is the Guided Busway Order if you want to go back and look at what they thought. The word cycle is used 7 times the word car 74 times.  Section 5.17 on Park and Ride/Kiss and Ride Sites mentions a total of 850 car parking spaces, expandable to 1,700 with no mention of cycle space.

We truly live in a world where Planning Minds are firmly stuck on cars. 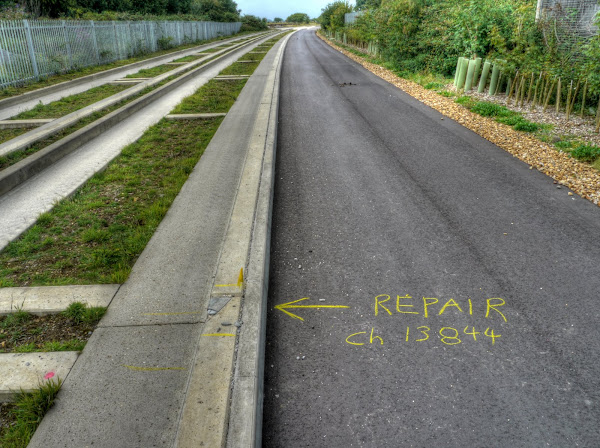 I didn’t count the cyclists and walkers on the route, although there were a fair few out. I mentioned that my original plan was to cycle back through the villages, in the end I didn’t because I had cycled up against the wind and I couldn’t resist having the wind squarely behind me on the way back.