My last post got me thinking about how much I enjoy all forms of cycling (well maybe not me having to race) and yet how easy I find it to moan about how dreadfully badly we cyclists are treated. I would like to think of my Blog as showing how much fun it can be to just get out and cycle (especially with a camera). I relish the freedom that cycling gives me, whether it is to bump along an old dusty track to who knows where, or being able to cycle right into the heart of Cambridge and then quickly park my bike near where I want to be. (Alright with there are exceptions – the Cambridge Railway Station cycle parking being one of them!) 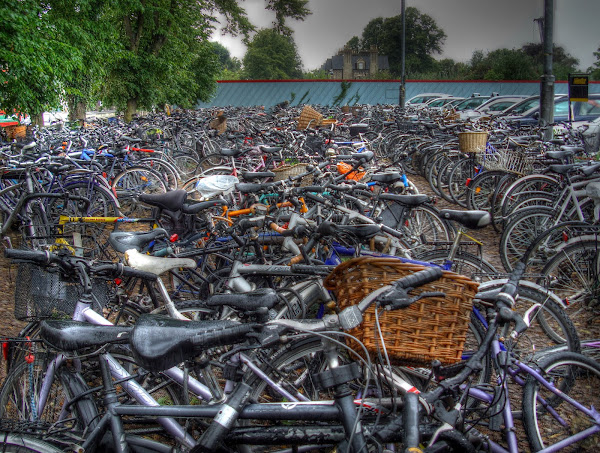 My last couple of rides, which have yet to appear as posts, sorry, were over the weekend and there were loads of people out and about.  On Saturday I cycled around the Wicken Fen area and bumped into MikeC on the footbridge over Burwell Lode.  On Sunday I meandered before heading back to the Cambridge Guided Busway (CGB) and using the newly surfaced tarmac cycle path to “blast” on up to St Ives and back. Which broke one of my “rules of cycling” – not to return on the same route I take. I was getting in a test run before the Cambridgeshire Guided bus test runs start. 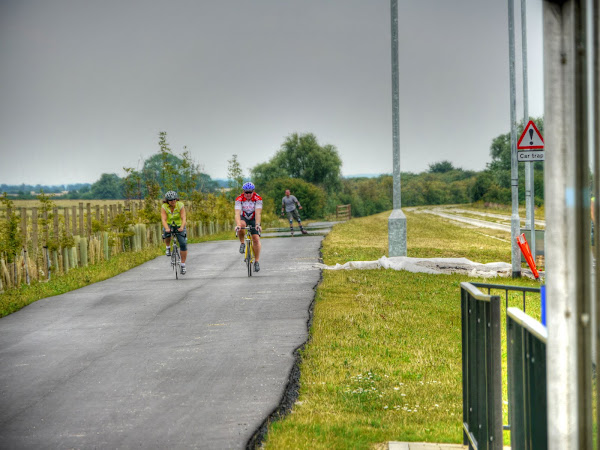 Whilst chatting with Mike we saw lodes loads of cyclists, some of an older persuasion. Which does suggest that just like roads – build half-decent cycling facilities and they (cyclists in this case of course) will come (even when they have to lug their bike over a footbridge). The great thing about Lodes Way is that it is both peaceful, safe and out in the countryside. On Sunday I passed over a hundred cyclists on the still officially closed CGB cycleway, many of them were family groups with younger children. What can be better than spending time with your kids on a Summer’s day. Build the facilities and they will come. 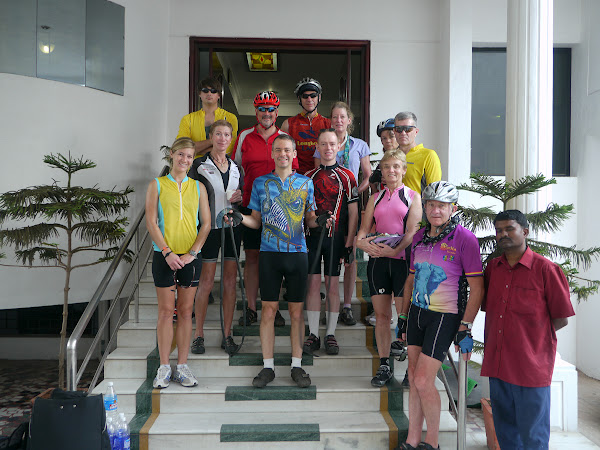 I was amused by this accidental piece of cycling infrastructure at a Tesco Express attracting cyclists.

Talking about “building the facilities” I think that for some time we have been grasping on to the notion that somehow electric cars would sweep in and take over from petrol driver cars as petrol got scarcer (and more so expensive).  Well apparently “We can’t afford to pay for public to charge their electric cars”. UK Government ministers said it was uneconomic to have “charging points on every corner” – yet most people's concern about electric cars is the limited distance they can travel on a charge (around 100 miles).  Batteries also take quite a long time to charge as well. 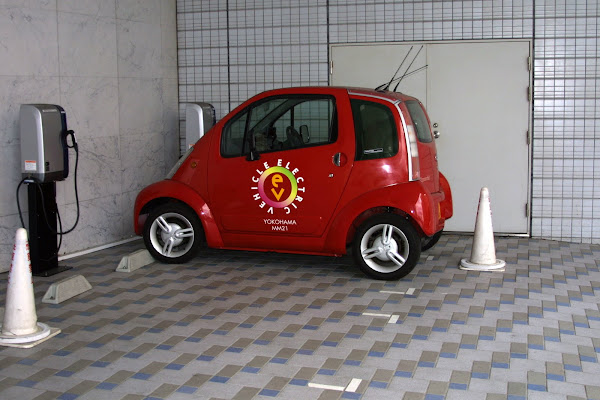 One of the other issues that some parts of the world have with more and more roads and hard-standing for cars is that it increases the flood risk when there is heavy rainfall.  Here in Cambridge the city and Milton are in the top 2% in terms of damage from flooding  in the UK.  The flooding occurs because the drains cannot cope with the heavy rainfall as the surface water is channelled down by the roads and houses.

The Friends of the Earth are quoted urging the government to “ensure there are sufficient charging points” however I wonder  is the F of the E being to short-sighted in in promoting a somewhat limited replacement for petrol vehicles? Here is an example of perhaps a more appropriate form of connected transport – "X-tra bikes on the S-train”. In Copenhagen S-train is remodelling 10 trains to double the space for bicycles and to make the compartments one-way with separate entrances and exits for bicycles – this sounds good to me.

Of course this is hardly a rigorous statistical analysis of the data. It did put into context, for me anyway what I look for.  When chatting with Mike I did mention that long gone are the days when I used to relish a long drive in the car, out on the open roads. No, it is not because I have gotten older, the level of congestion has just got worse and just like sheep we all seem to want to head to the same places at the same time. Whilst I agree it is not helped by the cost of motoring it must be even worse when young people wish to/need to drive and on top of that we find that there is an industry selling accident details helping to drive premiums even higher. 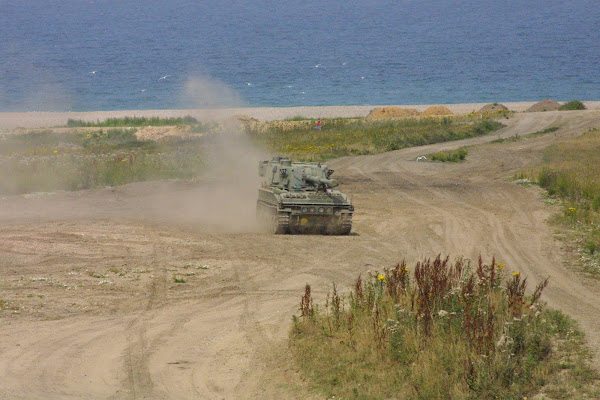 The problem is that as it gets more frustrating to drive, a minority of motorists then either think they are above the law or forget the law, or just can’t drive very well and break the speed limit. The general excuse is that the speed limits are too low for modern cars and that speed cameras are cash cows. Try telling that to families who lose loved ones every day. MikeC found a link to the Speed Survey results in Cambridgeshire. The data is not the most accessible as it is all contained in separate excel spread sheets  that require you to download and to be frank look like a information from the 60s.  Here are a few examples:

As a cyclist it is not very reassuring to see how prevalent speeding is. Government figures (pdf)  suggest that in the event of a collision between a pedestrian and the front of a car the risk of fatality increases slowly until an impact speed of 30 mph, thereafter it increase rapidly. One study it as estimated form a 10% probability of death at 30 mph to 50% at 40 mph.

The odd thing is that despite all of this there are motorists in the UK who do not get banned from driving despite being well above the limit of 12 penalty points because of  “exceptional hardship”.

I was amused to see that the Advertising Standards Authority have also got a position on cycling helmets! They asked a car company to stop an ad on daytime TV that showed adult cyclists in Copenhagen not wearing helmets, despite that being the norm. Perhaps it was an inconvenient truth.

Having said that I would certainly like to drive along this bridge – 26.4miles long – actually I would prefer to cycle along it and stop from time to time to take pictures – but there doesn’t seem to be a cycle track. 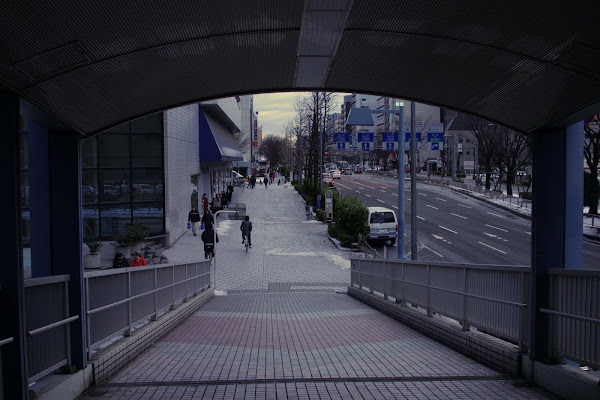 It probably doesn’t help that sitting still for too long is also “unsafe”. This isn’t very reassuring for people who spend too long in the car getting to and from work and then sit at their desks for most of the day. I do think it must be a sign of my age but I know quite a few people who have suffered from deep-vein thrombosis and most of them we sporty, active people.  (Although they did have desk jobs and did a bit of flying around – business travel that is.) This gives me even more justification for sneaking off early on my bike some days – not that I need an excuse really.

Now I once worked with someone who used to say that “you catch more flies with honey than vinegar”.  It would seem I have fallen into that trap. (Cartoon from XKCD)

So I will finish on some positives, the Cambridge County Council had recently ( I think) published a great Central Cambridgeshire cycle map which is also available as a paper map – I know MikeC gave me a copy. It shows quite a few of the cycle-able byways as well and is honest about their quality. For instance the CGB-Over path is shown with the comment that Bikes need to be lifted and the track is unsurfaced. it also shows many of the nature reserves around and about – I think I will give Overhall Grove a try. (It is near Knapwell).

Also rather than moaning why not make suggestions, the Cambridge City Council is consulting on the East Gate Development Framework – think Newmarket Road/Elizabeth Way.

And finally good luck to David Zarbiskie – a recent convert to Veganism who is competing in this year’s Tour De France. I am not even a vegetarian but I admire him for his conviction.