A wee trip to Scotland

Because her accommodation changes from year to year and because she gets quite a long summer break (15+ weeks) it isn’t that convenient to leave all her stuff behind. (To be fair she has quite a lot of text books and uses them – they are flipping heavy.

Mind you even with the holidays she gets by the time she finishes University she will have lived in Scotland for longer than I have, I don’t remember leaving Scotland but it was somewhere between 1 and 2 years of age.

It does mean that we visit more than we used to. As a boy we often spent out summer holidays in Troon with an Aunt or elsewhere on the West Coast places such as Oban, Largs. I have also cycled through Scotland when I did the Land’s End to John O’ Groats cycle ride and last year had a late Summer holidays touring around by train.

It is quite a long way whether by train of car so we try to have a couple of days up there when we go up to do our removals work. We have stayed in the Hilton in Dundee a few times but this year when we went to book a couple of nights there were offered other places. Further investigation and it turns out to have been closed. It is being demolished as part of a $1bn waterfront redevelopment. Well in the last couple of years we have been travelling up that redevelopment seems to have been taking its time.

So this time around we went upmarket, courtesy of one of the late booking websites and stayed at the Fairmont in St Andrews. I say in St Andrews, it was a mile or two down the coast – which put paid to my ideas of a gentle stroll in the town to enjoy the various foods and refreshments to be found there. The place is called the Fairmont St Andrews Resort and sits in over 500 acres. Mind you it would seem that a reasonable chunk of those acres is given over to the gentle art of hitting a ball into a hole with a stick. Golf is something I have never gotten into. Apparently I had an uncle who was a professional golfer in the US (before they made lots of money). My brother plays.

I can see that to play “well” probably needs regular practise and I don’t really have any spare time, so if I did play it I would be rubbish and that would probably annoy me even more.

The advantage of being this side of St Andrews was that we got a completely different view (and certainly different form the views when staying in Dundee).

The view of St Andrews from the Fairmont 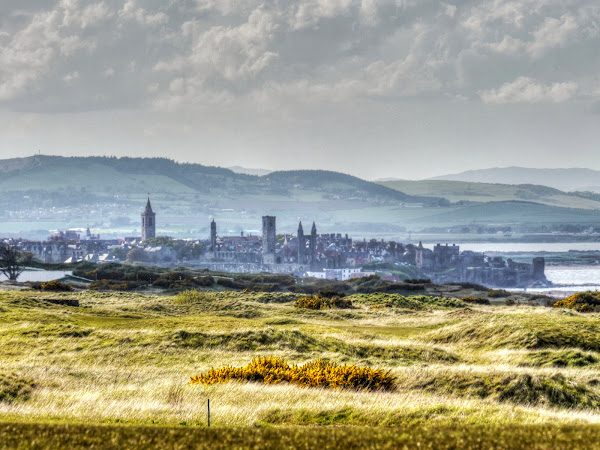 This is the same view but with less zoom, there are several Golf links (Fairmont golf,  St Andrews org) between the hotel and the town.

The view of St Andrews from the Fairmont 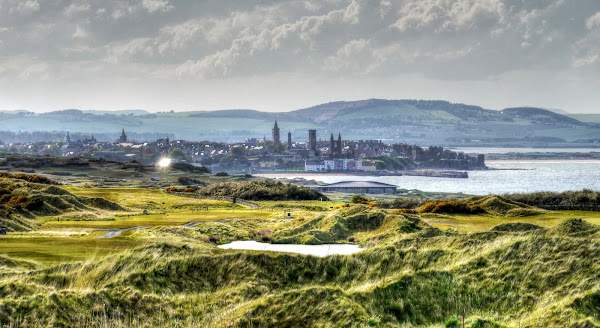 I guess there must be something about playing golf on the coast there do seem to be a lot of coastal golf courses in this part of the world. The place where my Dad grew up is Troon,  famous for the Royal Troon Golf Club. There was plenty of yellow Gorse (Ulex) about and the odd water trap as well.  According to Wikipedia Gorse is a fire-climax plant.

Not a putting green 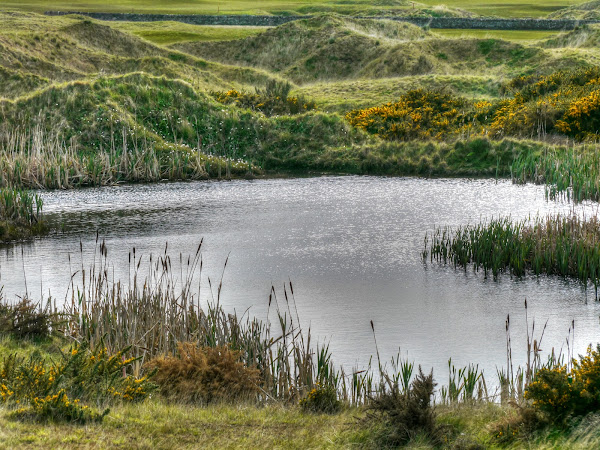 It seems to me that despite the complaints my daughter has about the weather on the East Coast of Scotland whenever we have been up picking her up/dropping her off or visiting her the weather has been wonderful.

The rocks are rugged – but the see was blue and calm. 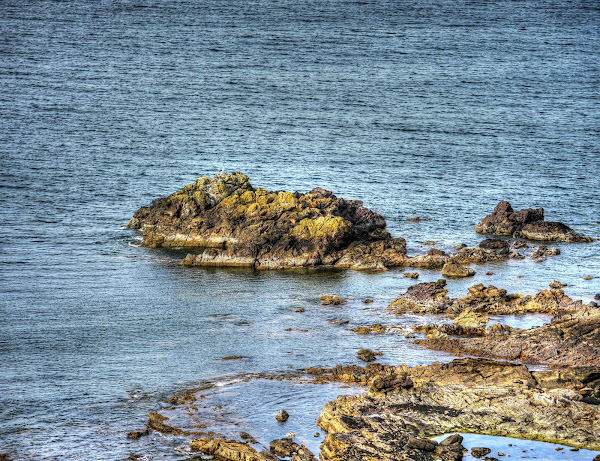 A lot more of that fire-climax plant – Gorse.

Gorse along the cliffs near St Andrews 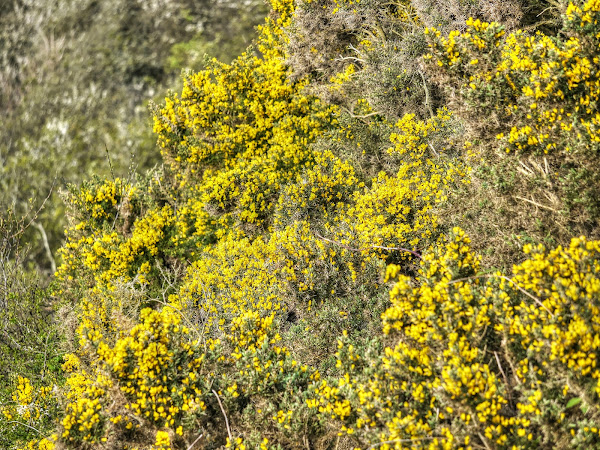 The sea looks inviting although I have never swum on this coast up in Scotland. I have swum in the sea quite a lot as a boy on the West coast of Scotland. The water is eye-wateringly cold. When we were kids my Dad to my brother and I swimming in the Troon outdoor pool. It was fed by the sea and we reckoned there must have been a refrigeration plant hidden away it was so cold. My brother and I slipped in slowly. My Dad just dived in without trying the water, I guess he’d forgotten how cold it was. He let out a bellow and swam the length of the pool and got out and wrapped himself in his towel around. 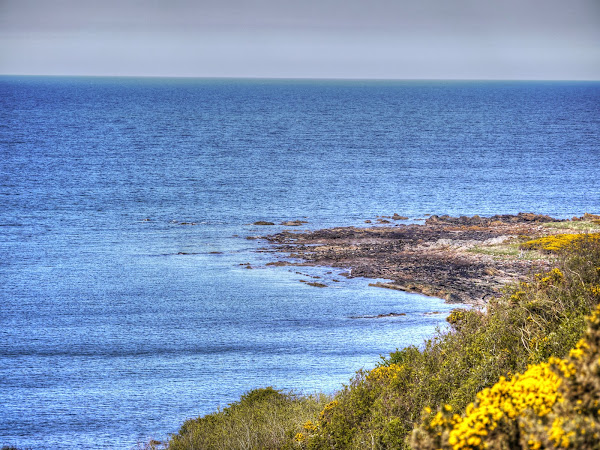 Looking at the map it would be fun to cycle along the Scottish East Coast – perhaps from Inverness to Newcastle I must see how far it is.  The Fife Coastal Path passes this way and describes the cosmopolitan atmosphere of St Andrews and the small fishing villages of East Neuk. I don't think I would do it using a unicycle though. 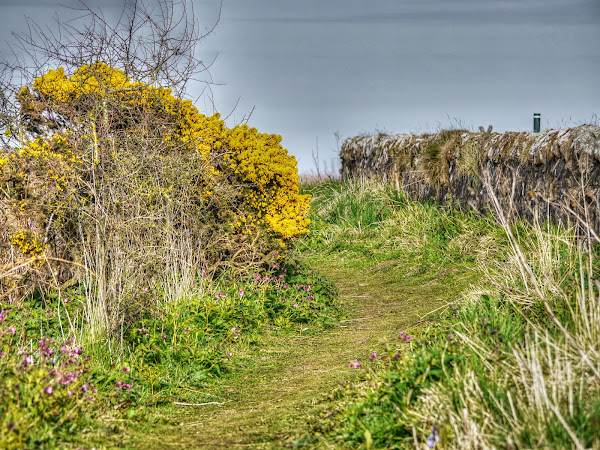 Across the bay is an airbase – RAF Leuchars, which has an interceptor role. One of the planes flown from RAF Leuchars is the  Eurofighter Typhoon. What makes it recognisable to me are the canards. It is also very loud. I guess if you are going to intercept an incoming plane then you want to get out there pretty quickly (here is a picture of an intercept of a Russian bear).

Here is an interesting collection of pictures for plane spotters, taken from the LAX runway. (No Typhoons but they do have a Raptor.) 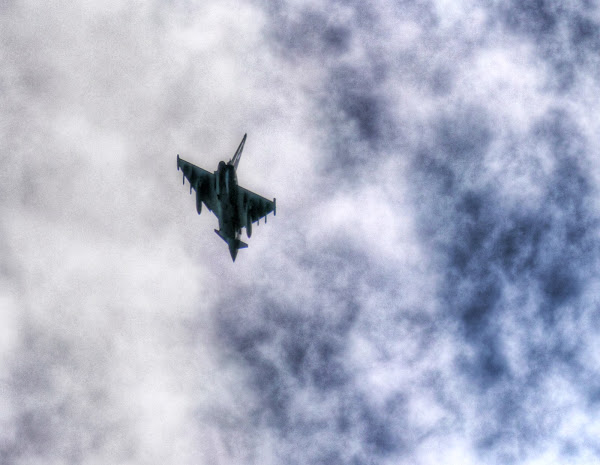 Good news – I found a shop in St Andrews that sells Thistly Cross Cider – I will buy some before leaving town. It was mentioned as a good cider in Ped’s outdoor diary – who has the pleasure of living in these parts – well down the road in Dunbar.

And finally someone else’s pictures – England on the cusp of Summer (although why not Scotland!) Check out the bluebells in the Lake District – beautiful. The natural beauty of Madagascar – that would be an interesting place to visit – any Sustrans tracks there? Lightning strikes in the Grand Canyon and Lanterns in the sky.

And finally Communist Russia, eerie Alaska and a wonderful Wisteria.