The long and winding road to … Ely and back

Wednesday, 24th April 2013: Having been on a bit of a cycling roll and decided to go a bit further afield. Not having cycled up to far-flung Ely for a while I reckoned that is where I would go. If you check out the map (second picture down) then there isn’t much choice about the route really. The most pleasant, without being too rugged, route is along NCN51/NCN11 via Barway.   It is not the most direct way, but it is scenic and quite.

The trouble is I don’t really like coming back the way I came and yet there are not many return routes that are any good.  The ideal route would head out of Cambridge along the River Cam on the tow path, on NCN11 to nowhere (well Waterbeach). If you follow the link (to an OSM cycle map) you will see that there is an aspirational connection to the Lodes Way – but that has stalled.

I believe there has also been talk of a bridge near Upware  which would be pretty neat, but I think it was only talk. I must try cycling along Long Drove though. A quick look using a Satellite view shows the path alongside the River Cam as a reasonable track.

So my plan was to sort of use NCN51, then divert from Swaffham Prior up to Upware and re-join NCN11 after crossing Dimmock’s Cote Road. It was a tad shorter, by about 2Km and faster – tarmac roads are less tiring than the gravelly surface along Lodes Way. Although there is traffic along the road to Upware the road is narrow and undulating and so only a few very foolish drivers speed along it – and most of them slow down when passing a cyclist.

I came back via Soham, there is one unpleasant bit where I had to use the A142 – not a nice road for cycling, but then I was able to use quieter roads and tracks.

The route is around 70Km long and here is the Bike Route Toaster link. Don’t worry it is flat.

I am trying not to take too many pictures – that way it makes me look for different perspectives. I had to stop to take a picture of this deer in the field as I cycled out of Swaffham Prior. It just stood there watching me. Normally the deer are quite shy but this one didn’t seem to be concerned – having watched the speed I was cycling he probably felt quite safe. 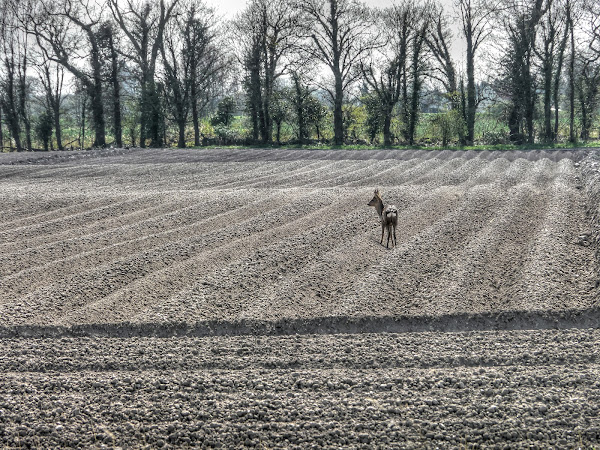 Here is the Bike Route Toaster Map. As long as you are not in too much of a hurry it makes a pleasant ride. I did think that the “traffic-calming” in Soham was a mess though. 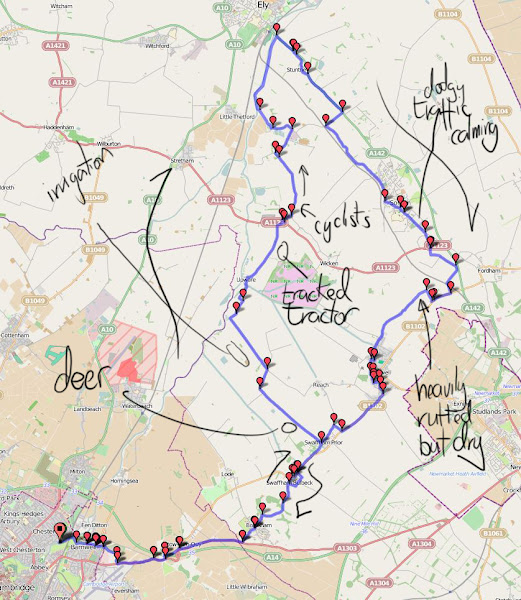 Irrigation – or is it a water jet powered plane taking off? 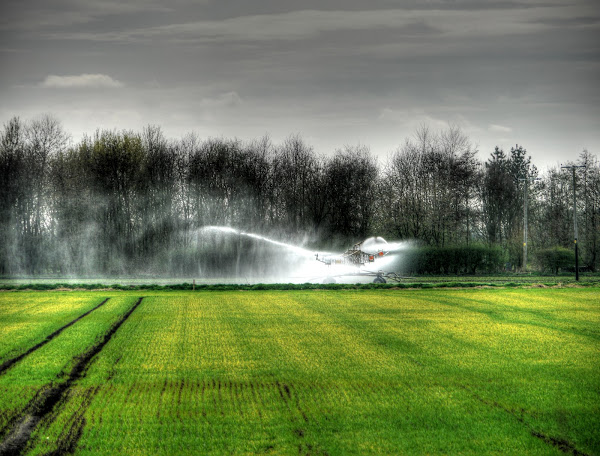 Although the soil in the fens tends to be black and peaty as you head out of Upware  it is much browner. There was a tracked tractor ploughing. My son reckons that a tractor with tracks is much faster across the fields. The cab has the label MT765C – which leads to this webpage. It is made by AGCO and they also seem to own Massey Ferguson. 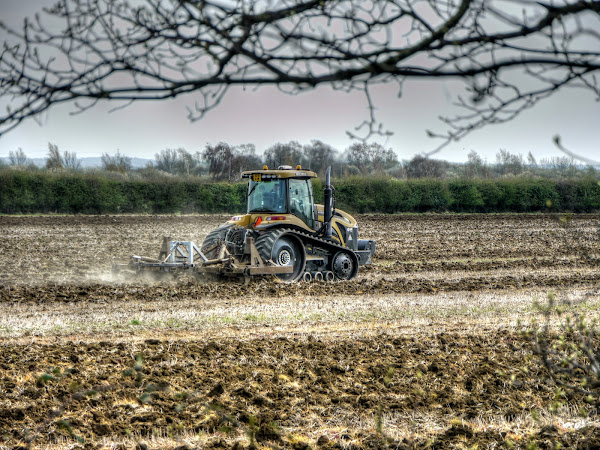 I popped over the A1123 and then down Docking’s Lane to join the NCN11 route between Wicken and Ely. Docking’s Lane is a byway and a mud track. In this picture is the NCN11 route on Padney Drove – a country road – which is a no-through road for motor vehicles. Although there is a short stretch of private road so some motor vehicles can get through. 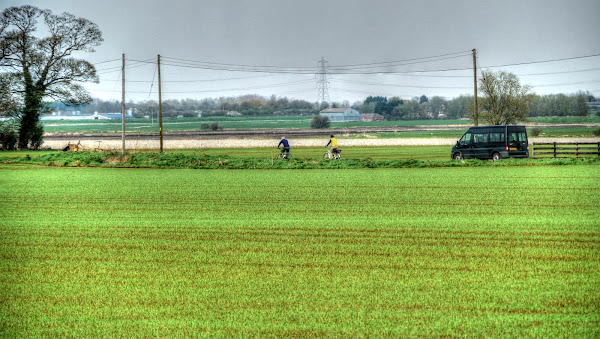 This is Docking’s Lane – in the middle it is fine – each end tend to be rutted and when wet there can be some large puddles around. 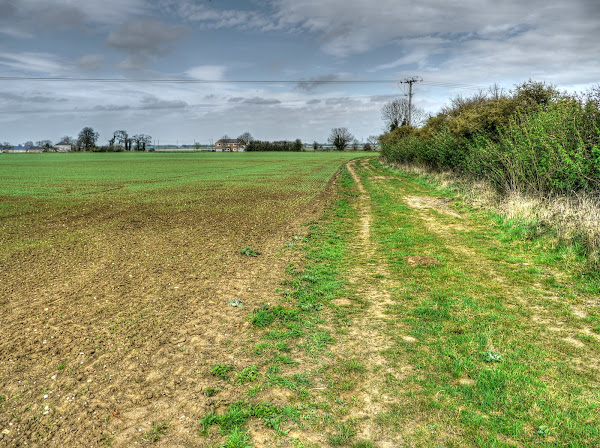 Once I joined the NCN11 route I found myself catching the two cyclists I had seen ahead. Here they are. After taking this picture, even at the modest pace I cycle at I soon overtook them. Of course I then had to speed up a little so that the next 6time I stopped to take a picture they wouldn’t overtake me – why – I’m not sure really. 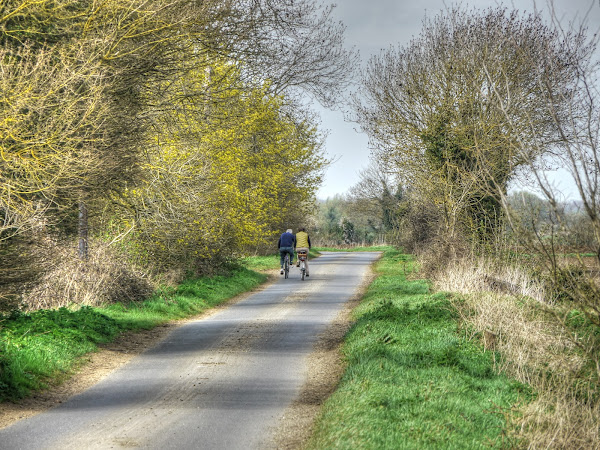 At Barway the route switches to farm tracks and then a fairly narrow tarmac shared-use path along the top of the bank alongside the River Cam. As you get closer to Ely the soil gets blacker and peatier again. 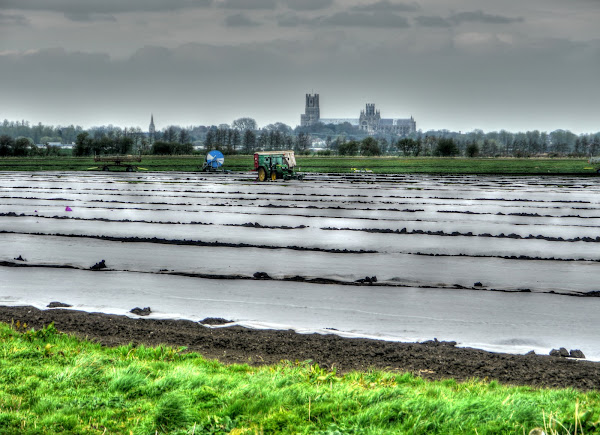 The fields have been well prepared. The outside of the field sometimes gets treated differently to the interior. 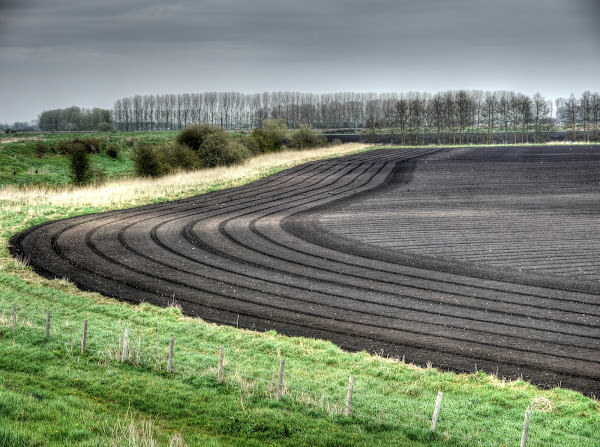 There are a whole tranche of fields on the south side of the River Great Ouse, which look pretty good for growing crops. 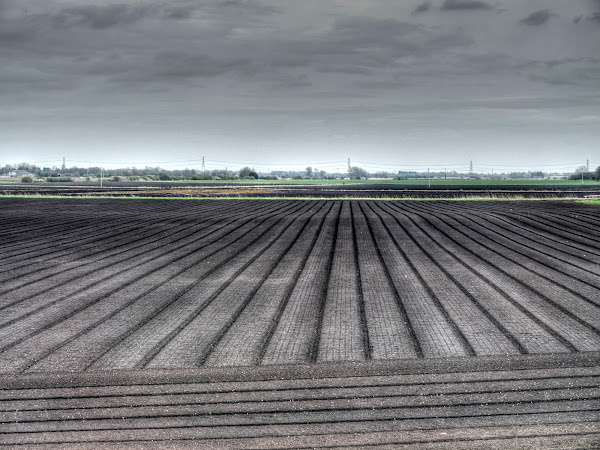 A bit further long and the soil seems a shade lighter. This lot has been covered with fleece.

Not so Peaty Fields Near Ely (but fleecier) 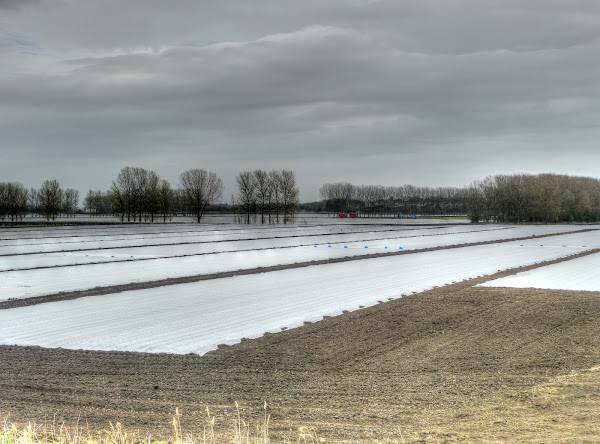 On reaching Station Road I didn’t actually cycle into Ely, instead I turned back and headed down the A142 towards Soham. You can use a shared-use path for a short way and then I detoured through Stuntney to avoid the A142 as much as possible.  The A142 has many of the things I look to avoid when cycling on roads. It is quite wide, has a lot of mixed traffic and has a 60mph limit. So you find yourself trying to avoid the “draught” from high speed vehicles, hoping that you have been seen and occasionally find cars driving towards you in your lane as drivers desperately overtake to avoid being held up.

So assuming the road length is 10 miles then at 60mph it takes 10 minutes at 50mph it takes 12 minutes. So risk my life for a two minute time saving why don’t they!  I only cycle down the A142 on the road for 2Km and then take the turn to Barway (Bar3ay Road) and then just before the railway line turn down towards Soham.

As I was leaving Soham on the Fordham Road it struck me what a dog’s breakfast they have made of the traffic calming. There are short bits of narrow on road cycle lane, barely wide enough. There are pinch points, speed cushions and cyclists are expected to cross from one side to the other – if they use the cycle facilities. It, in my mind, exemplifies just how poor some road design is.

I stuck to cycling on the road, but once or twice had cars “nip” past me and then dive back in as we approached a traffic island. The effect of this is to make motorists think that cyclists should be out of their way.

Fordham Road – Soham – an award for the worst cycle facilities in Cambridgeshire? 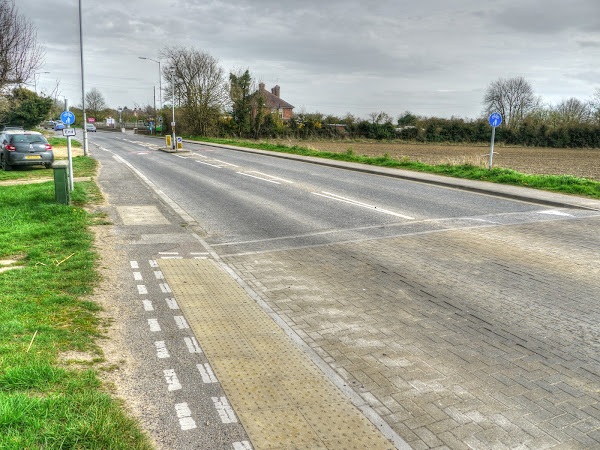 This is looking back up the road – pinch-point Islands, strange arrows pointing cyclists onto the pavement  with a ramp across the road (in the last picture) and no priority to cross. Also notice how there is a short bit of cycle lane further up on the right. Also on the left hand side of the road cars move out to avoid the cycle lane island and then back in again straight after to avoid the island in the middle – which is not fun when you are cycling on the left hand side.

Fordham Road – Soham – an award for the worst cycle facilities in Cambridgeshire? 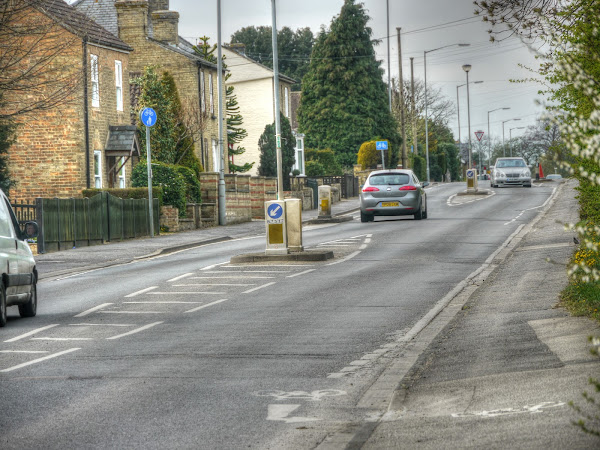 It was a pleasure to get back onto some honest byway after that. I usually head out on Orchard Road, and then almost directly opposite is a byway towards Larkhall Road. This takes you to Cockpen Road where after a short ride along the B1102  you reach Ness Farm and Tollgate Farm and can turn off along another byway which leads to Broads Road into Burwell.

This particular track gets very rutted and is one I would definitely avoid when wet – as you can see it was rutted by dry. The area to the right is known as The Broads. 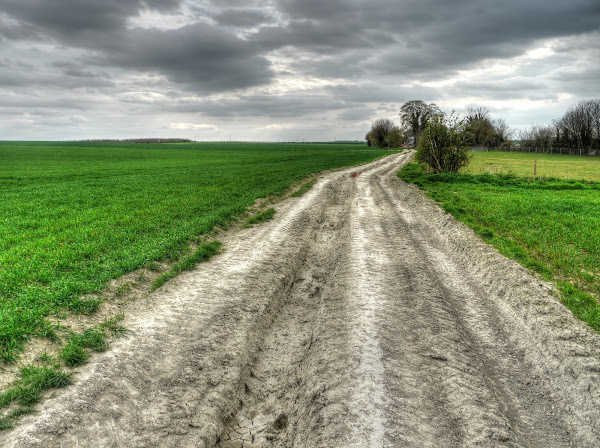 This is the view looking back the way I came – the byway swings round to the right and then between Ness Farm and Tollgate Farm.  There used to be a Toll Gate, it was removed in 1905. 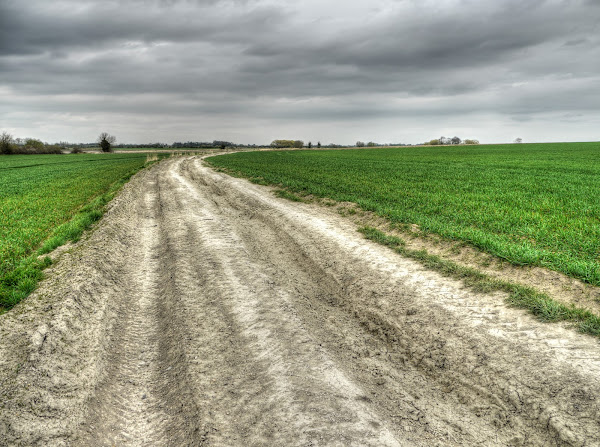 On my way through Burwell I noticed a byway that I had not been along before and so naturally cycled along it. The byway has a name, which you might be able to see on the sign – "Dark Lane” which was a main route for wheeled traffic before 1815. It is no longer a through lane for wide traffic. 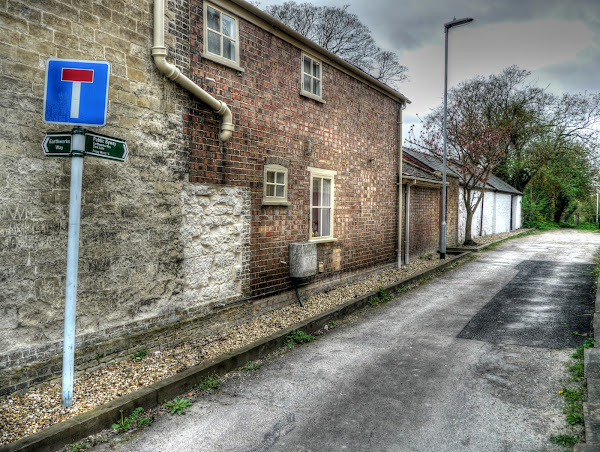 As I wound my way along the final part of the ride through the Swaffhams along the NCN51 I had to stop to admire the Horse Chestnut Tree leaves emerging. 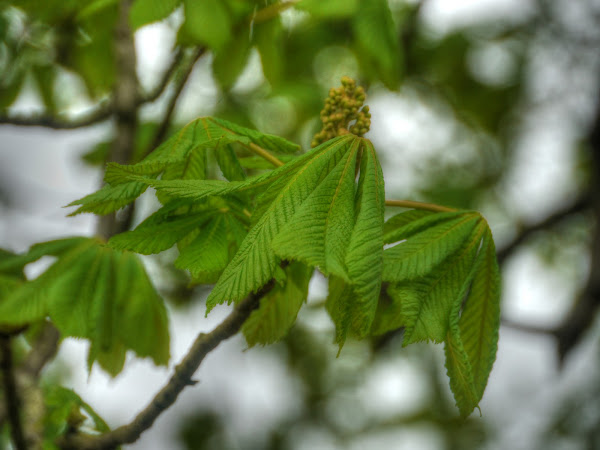