Dodging the rain on Lodes Way on a Friday afternoon

Friday, 26th April 2013: It has been a good week for cycling – the Spring weather has been almost irresistible. Well for me anyway.

A quick update on the “Get Britain Cycling” petition – 54,318. It is still climbing. It is climbing more slowly than I would have hoped.  The trouble is we seem to be in the mind-set that motor vehicles are so important that we forgive the transgression of drivers. Although many drivers seem to want to rant about cyclists jumping red lights. Ye what we seem to ignore is the fact that cyclists and pedestrians are vulnerable road users.

Today’s Times reports on a City of Westminster Council Study indicating that more than two thirds of all crashes between drivers and cyclists in Central London are the fault of the motorist, in one fifth the cyclist was at fault and the remainder we either were no fault could be attributed or both parties were at fault.

Interestingly the research also looked at Cyclist/Pedestrian collisions and concluded that 60% were the fault of the pedestrian and 40% were caused by the cyclist.

Now there is an effect known as Risk Compensation in which people tend to adjust their behaviour in response to the perceived level of risk. Apparently with the introduction of anti-lock brakes drivers started driving more faster and following the vehicle in front more closely.

My point is that in such collisions you need to take into account an additional factor – what is the imbalance in terms of the risk taken. Is it inherently immoral to consider the co-existence of motor vehicles and bicycles on the same piece of road without some significant presumption of responsibility on the part of the operator of such potentially dangerous machinery.

Now the Highway Code has some waffle about paying particular attention to vulnerable road users, but that does not seem to be a consideration in the actual practice of the road traffic law or the design of roads.

So what is the effect – well I reckon it keeps many from cycling, preferring the safety of their reinforced vehicles.  Why else do so many parents drive their kids to school? Yet (to quote The Times) Britain languishes near the bottom of the child obesity league tables in Europe.

The trouble is her in the UK we seem to want to appropriate responsibility for the problem in the wrong place. The problem is laid at the wrong door – but cleverly couched to blinker us to the real problem. For instance it has long been said that to get more people cycling we need more cycle training. The message is that we must focus on the skills of the vulnerable party – implying they are to blame for being injured in an accident. Even where the cyclist is blameless for the accident the law still can still be held to have contributed to the result for (in this case) not wearing a helmet.

Don’t get me wrong I am definitely not against more training and acquiring skills but they are not a substitute for dealing with the elephant in the room – motor vehicles carry an inherent danger by virtue of their mass and speed.

The Parliamentary Advisory Council for transport Safety (PACTS) commissioned a report by by an organisation called Road Safety Analysis. It shows a spike in road casualties for children around the age of twelve.  The report (pdf) does say the more must be done to tackle pedestrian deaths. It is more of a review of the data and does not really attempt to isolate courses of action, so it would seem that the “causes” cited in the Daily Mail article are supposition on the part of different interested parties.

For instance the above report cites the most significant factor (Page 14) in accidents as being “Pedestrian failed to look properly” in 60% of accidents, although the report does indicate that there can be several Contributory Factors. So the simplistic view can be – carry on letting the motor vehicles speed and train the pedestrians better. However the problem might not be carelessness on the part of the pedestrian but an inability to detect fast-approaching vehicles properly. So the inconvenient truth is that to make roads safer for all then vehicles have to slow down. (Another article on the issue of speed perception in children.)

Apparently this inability to perceive the speed of an approaching vehicle can also occur in old age – along with a decline in the ability to move quickly.

So the message; one set of data does not an answer make, you need to look at cause and effect and then test (or find data that tests) the issue. So if we really do want to make our roads safer and feel better about giving our kids a bit more freedom and exercise then we need to take steps to take the fine waffle of the Highway Code and make it happen. GPS tracking systems in all motor vehicles is my recommendation.

We also need to move away from considering the motor vehicle as the saviour of the economy. Here in the Flatlands the A14 is an oft cited example of a road in need of a £1bn plus upgrade, the result of which will magically boost our economy. Although the rhetoric tends not explain how that might happen exactly. Even worse many people blame the lorries for the problems of the A14, yet they are probably doing something more relevant to the economy than commuting. There is talk of making it a Toll Road although the M6 toll road doesn't seem to be very successful as the traffic on it has dropped by 40%.

It would also appear that commuting is bad for your health – mind you it seems a bit like either scare-mongering – or fixing the wrong problem if you ask me. Mind you I am in favour of trying to reduce the amount of commuting – leave the roads to those that need them.

Just recently I have noticed quite a few drivers in and around the villages I cycle using their mobile phones whilst driving. My guess is that feel that they are unlikely to get caught out in the sticks. Whenever I see it I wish that I had a helmet cam, although I don’t usually wear a cycle helmet.  A phone was implicated in a recent case of a cyclist being doored by an MP. She was just holding the phone though.

Now back to my ride – I now I have been doing a lot of cycling this week – but I am fortunate enough not to have to commute. I was a bit worried that Friday would be rained out.  However the rainfall was short and sharp around lunchtime.

You can see the puddles alongside Bottisham Lode on my way to White Fen – we haven’t had a lot of rain recently though so it dried up quite quickly.  There were blue skies and puffy white clouds as well. 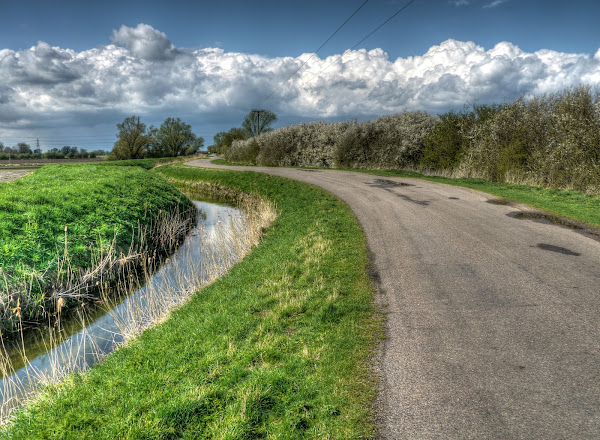 As I reached White Fen there was a sign on a stand – although it had fallen over. 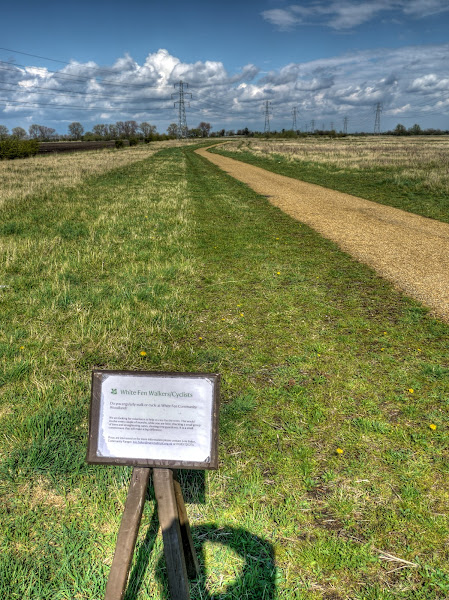 They are asking for volunteer to assist in the upkeep of the fen. 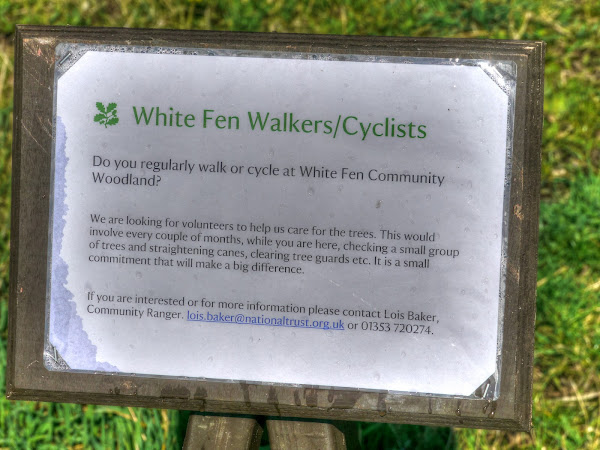 I took this picture – because the tree on the left was coming into leaf. 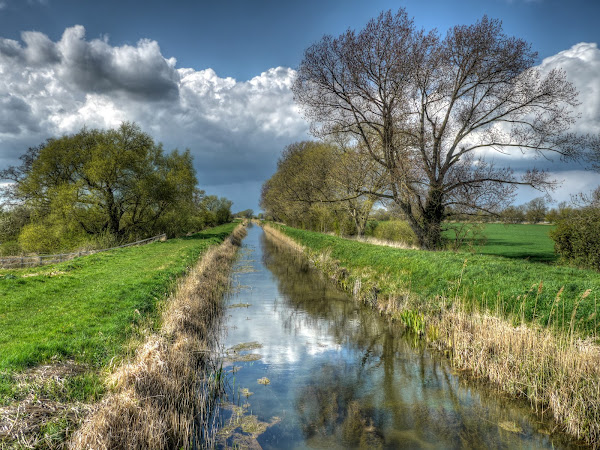 This field is at the crossroads of Headlake Drove and Great Drove/Little Fen Drove at first I though that someone might have been joyriding in the field – but the churned up soil is too wide. This field has been recently harvested – for turf.

Churned up Field on Lodes Way 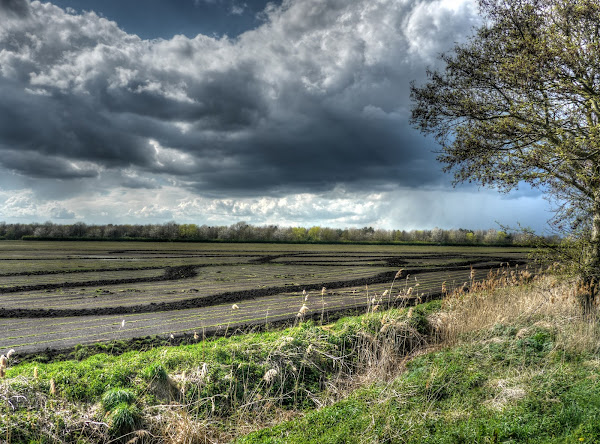 As I carried on the dark clouds in the sky looked a little ominous and I didn’t have a rain jacket. I stopped where Headlake Drove meets Split Drove to take this picture – wondering whether to push my luck. I did. 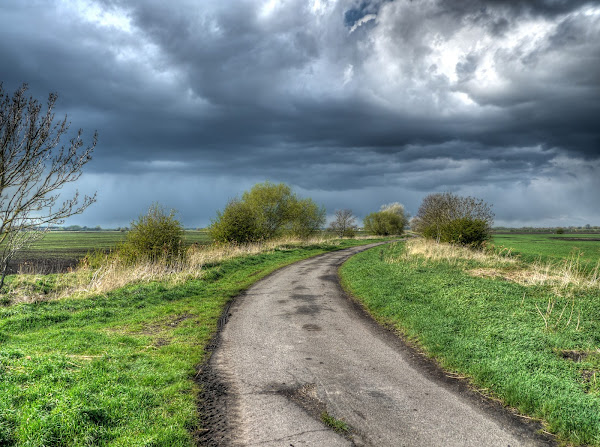 It amazes me how quickly dandelions (Taraxacum)  appear and almost as soon as the yellow flowers appear you end up with dandelion clocks or seed heads. The flowers scrunch up overnight. As a boy we used to reckon that you could tell the time by counting the number of puffs it took to dislodge all the seeds. 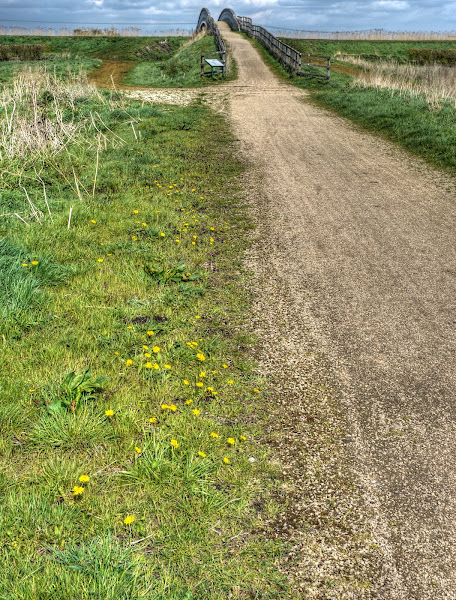 As I got closer to Wicken Fen I reckoned discretion was the better part of valour and cut short my ride and headed back to Burwell to head home. I felt a few rain spots, but by heading south moved away from the clouds.

Rain clouds heading my way on the Lodes Way 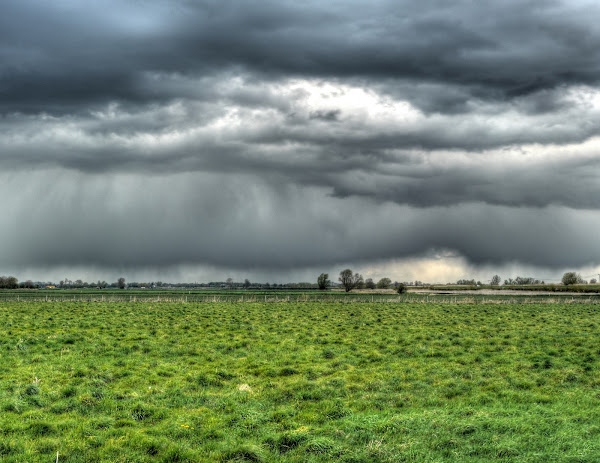 I got home without getting wet and despite having my ride cut short – it was just what I needed.

And finally some pictures. Photographers do say that the best light is in the early morning or late evening. The mid-day sun can be rather harsh. Well here are some pictures Arctic Sunset – which lasts three months. Talking about the sun as we head for a solar maximum – here is a NASA picture of a solar whip. Back onto sunsets/sunrises here are some stunning pictures of volcanoes at different times of day.