Lodes with a Long Lens

I find it hard to adjust to the longer lens, partly because it doesn’t have the larger ratio of the shorter lens and partly because I forget and get too close to whatever I am thinking of taking a picture of. It might be quite good for wildlife, except at maximum zoom I am not fast enough to focus in on moving objects such as birds. In fact I sometimes find it a struggle focusing in on larger moving objects such as planes.

I guess that the large ratio comes at the compromise of quality, but given the way in which I take pictures that is probably not too much of an issue for me. I must remember to clean both lenses though,. they acquire dust particles in my travels, which can show up quite badly when taking picture in sunlight (an effect made worse by the HDR processing).

One of the reasons I like cycling in the countryside is because you see some of the UK’s wildlife around. So it was depressing, but not surprising to see that a “Wildlife stocktake” has highlighted far too many of the UK’s species.  The trouble is there are a number of reasons from rising temperatures to habitat degradation. However the hedgehog is one such create on the decline. I am never sure that just because I see less of a creature that is because I live in a different part of the world than I did growing up, or perhaps I pay less attention. (I do a lot less roaming about fields and woods than when I was a boy.)

The estimate is that there were around 36 million hedgehogs around in the 1950s and that there are now fewer than 1 million. That should ring alarm bells, the trouble is we are all to busty to care. They don’t know what is the cause of the decline, but put it down to:

“habitat loss, poor management of hedgerows and fragmentation of habitat, due to roads, housing and other developments. Tens of thousands of hedgehogs are killed by road traffic each year.”

The report also suggests that more than two animals and plants a year are becoming extinct in England.  What an appalling legacy to leave future generations. It makes me realise that it is not my lack of attention.

I guess it is yet another reason for choosing the bicycle over the motor vehicle we tend to slaughter fewer animals than motor vehicles.  Although I have swallowed a few flying thingies in my cycling travels and did once run over a rabbit's tale down on NCN51 near High Ditch Road.

The other aspect of our countryside that is changing is that of the trees we see. I have shown pictures of leaves from Horse Chestnut tree leaves after attack by the leaf-mining moth.  The Ash tree is also under attack along with the Sweet Chestnut tree.

Does widening the A14 look like such a great idea now?

Perhaps that is why I find myself cycling along byways and bridleway a little more – sub-consciously seeking out wildlife that is on the decline?

This ride took me out along the bridleway alongside Swaffham Bulbeck Lode from the village of the same name. The along Lodes Way and then down to Black Droveway. For a change I went around Reach on Green Lane then back down the middle onto Great Lane. then along Straight Drove to Upware, back down Garrison’s Drove and then to Burwell and then back via NCN51.

It was a grey day and I didn’t take that many pictures, although the blame lies with the photographer and not the light or the lens. This was taken from the corner of White Drove Way and Fen Lane looking North-West. It was the silhouette of the trees that caught my eye. 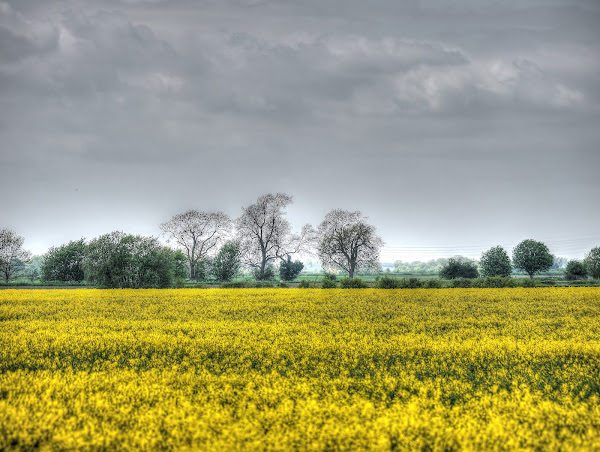 This was taken cycling along Black Droveway, at first I though I must have taken the picture twice. The pylon seems to have been duplicated. There are two pylon runs leading out of Burwell running in parallel. In the distance you can also see a Wicken windmill (and another run of pylons. 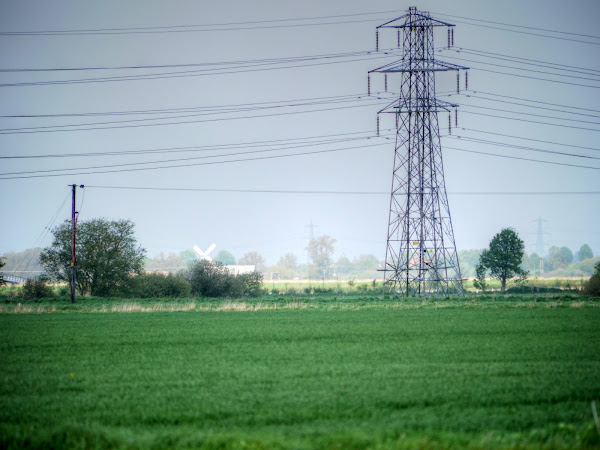 On my way to Reach I stopped near the Swan Lake Grain Store to take a picture of this ditch and had a chat with a walker. He was told by his Doctor to exercise for 30 minutes five days a week and this was one of those days.  After we finished chatting about local pubs and the like I wished him a pleasant return walk to Reach and it turned out he didn’t enjoy the walking at all. Which seems a bit of a shame. I suggested he should by a camera and take pictures along his walk.

Although this part of the world tends not to get huge amounts of rain the ditches are pretty full. I guess it is partly all the rain last year and partly because the Drainage Boards are keeping water in the system to facilitate irrigation. (Well that’s my guess anyway.)

This ditch is Catch Water drain and passes under Barston Bridge. 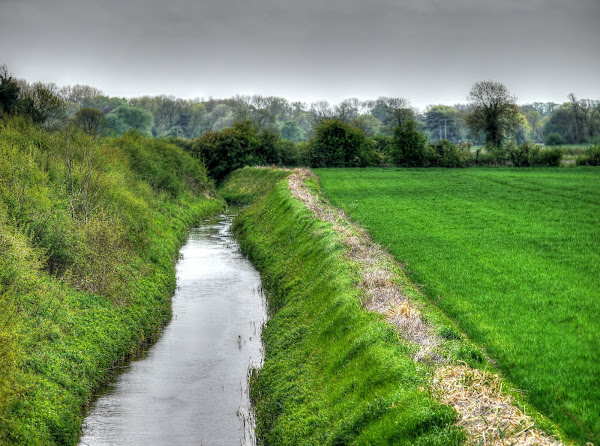 I got a little bit of extra exercise by cycling up round the back of Reach on Green Lane. It isn’t that much of a climb though – from nigh on sea level to 14m is hardly a pimple – except in the flatlands.

I cycled through Reach onto Straight drove, with a slight detour along the Reach underbank and back by the Lodes Way bridge over Reach Lode. I stopped briefly to take a picture looking down Commissioners’ Drain. The bridge in the distance if the Headlake Drove bridge. 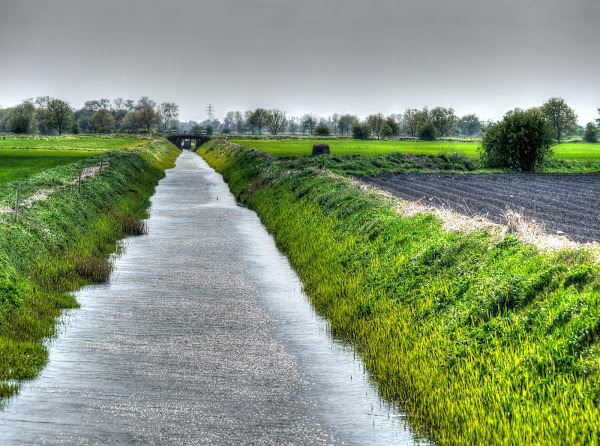 I After popping up to Upware I headed back down the side of  Reach Lode and down the bridleway to Wicken Lode. I stopped on the wooden bridge over Wicken Lode (called Wicken Lode Bridge on the OS map) to take this picture of Wicken Lode. It is a reminder that although I might like to think I am in the middle of nowhere – it ain’t really the back of beyond. 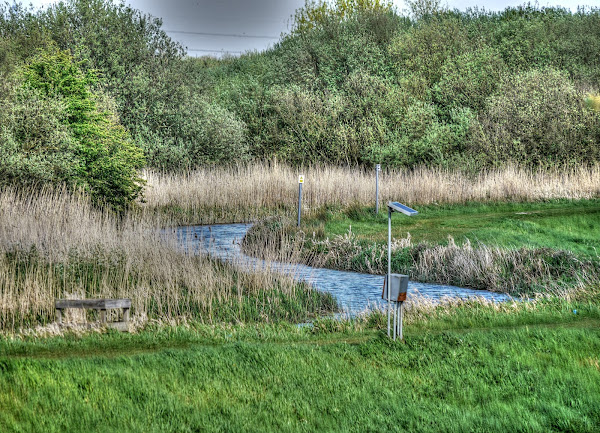 From the same vantage point – the view down the Lode to where it splits at Pout Hall Corner. The signs indicate Burwell Lode to the left and Reach Lode to the right. 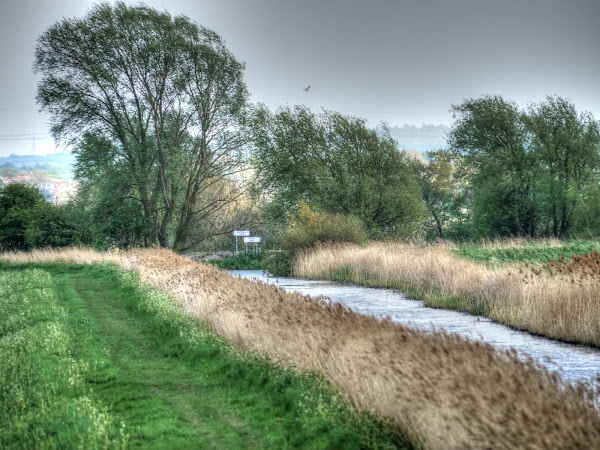 This is Pantile Lane in Burwell – it is only just wide enough for a car to pass – but it has its “regulation” yellow lines in case drivers decide to park there and so block the lane. Although it seems that the road is also wearing out and taking the yellow lines with it. 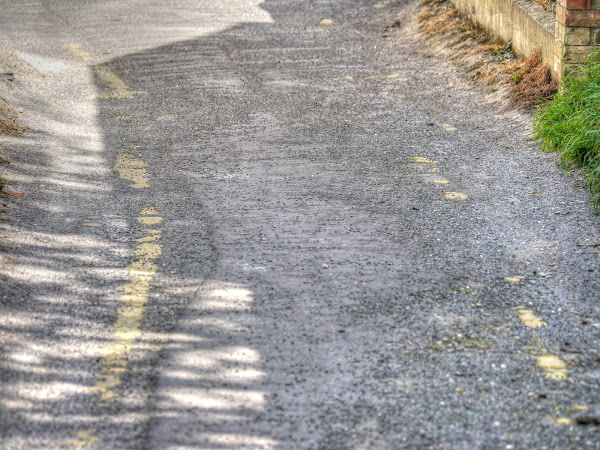 I headed out of the village on NCN51, which weaves about a bit until I reached the B1102, Swaffham Road. On the outskirts of Burwell the pavement magically becomes suitable to be a shared-use path. I don’t really like this path, but come this way for a change.

Although I don’t like the shared path I do use it – it is preferable to close overtakes on the road. Generally you don’t seem many people using the path, either on foot or bicycle When you do the path is barely wide enough to pass a single oncoming pedestrian, let alone a cyclist.

The picture shows where the Devil’s Dyke was cut to make way for the Cambridge to Mildenhall Railway Line – I think it is one-nil to the Dyke. 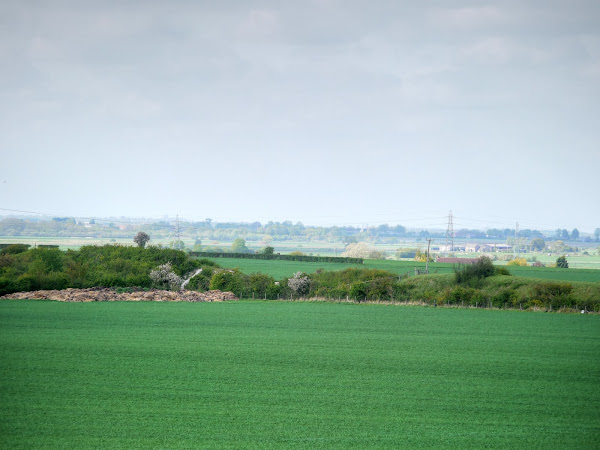 The road climbs slightly into Swaffham Prior – this is what Reach looks like from the “hill”.  It maxes out at 27m in the village. I tend to turn of into the village along Rogers Road, by this time I have had enough of the traffic.

Reach in the distance from Swaffham Prior 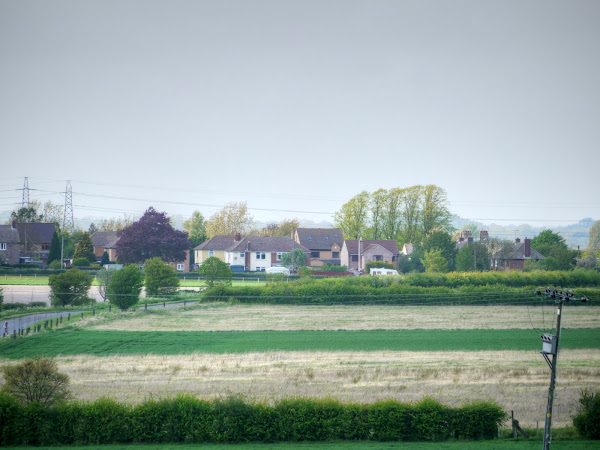 An update on the cycling petition – 63,624 people – get your friends signing up.