Wednesday, 1st May 2013: It was a glorious day on Wednesday and I had a few meetings around town – so what better reason to get out cycling could there be. They were moderately smart meetings – collar, trousers, proper shoes, but I didn’t bother with a jacket, I wore a thin jumper instead.

Here are the weather stats for that day, it wasn’t super-warm, but there was sun pretty much all day and it wasn’t windy.  Good weather for cycling, especially when you want to look reasonable smart and not look like a sweaty heap. The great thing is that, if you have time, it makes it so much more inviting to take the slightly longer and more scenic routes around Cambridge. Or put another way it makes it easier to avoid the grotty roads, despite them being shorter and quicker.

Talking of which, one of my rides took me along Adams Road. Which got me wondering, why are there so many cars parked along here – most of the houses seem to have garden space. Or are these cars parked in the streets by people working commuting into Cambridge to work? (Or are they HMOs).

That is a lot of space to give up to vehicles at rest. If land is worth costs, say £1m - £2m an acre in Cambridge – an acre is equal to nigh on 4,050 square metres.  Assuming a car has an area of 4.5m (length) x 2m (width) and needs a 50% spacing gap. Then you can park 300 cars in an acre. (This is a rough estimate.) So in Cambridge each car is occupying land worth nearly £7,000. You can see why drivers feel it is their right to park on the street next to their house – because land is so expensive you want someone else to pay for it!

The other great thing about parking your car on the road is you don’t need planning permission. A local councillor has fallen foul of planning regulations by installing a bike shed outside her home to store her children’s bikes (and keep them safe) as we are all told we must do. Although one of the commenters pointed out they could have used an old rusty ran parked out front to store the bikes in without planning issues. (As it is a private road there might have been other problems though.)

Adams Road, Cambridge – a cycle route from Coton into Cambridge 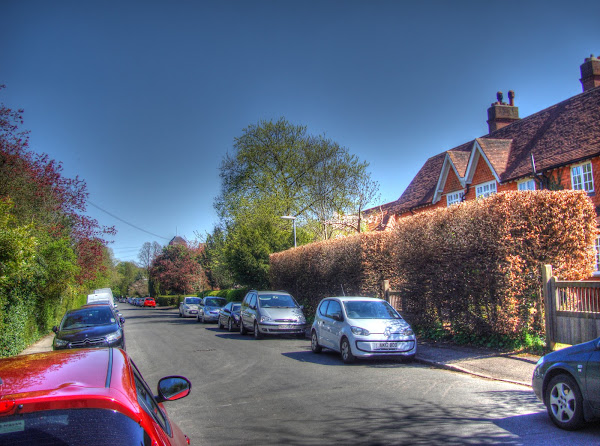 My meetings took me to various places and at one stage I found myself cycling along Mill Lane having cycled across Laundress Green. In the background you can see that the Sustrans NCN11 route comes this way. I am not sure it is a route I would use too often. It is a popular tourist spot and so getting through on a bicycle can be a little tricky.

That pub in the background is The Mill – I am not sure what is going on though – but it was worth a picture. Apparently we’re giving up on pubs and beer, with 26 closing each week.

People Dressed in Black and White outside The Mill 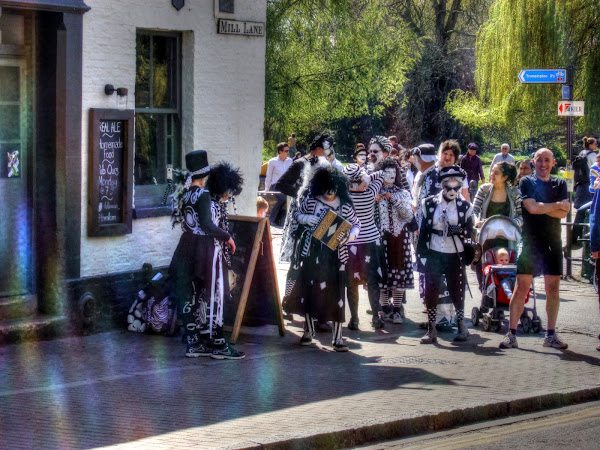 At the end of the day I went for a little excursion out to the Newmarket Road P&R and back along High Ditch Road.

It is a pleasant trip out alongside the River Cam and then back via High Ditch Road. If you have ever been that way then you might have seen cows grazing on Stourbridge Common. Where I grew up (Somerset) there were lots of herds of cows. Times are harder for farmers nowadays I would imagine though. Apparently there were 3.2million dairy cows in 1980 in the UK. there were 1.8 million in 2010. The number of dairy producers fell from 35,741 in 1995 to 15,716 in 2010.

Anyways, cows don’t worry me, they can be lively and inquisitive and cows will protect their cows. (Here is some advice from a cowboy relating to Cambridgeshire Commons).  Incidents can occur though and here are a couple, walker trampled by cows and “cattle ‘charged into play area’.

One of the common factors when there are problems is the presence of dogs. They say that if you are walking with a dog on a lead and the cows charge at you you should let the dog of the lead – it will run off and the cows will follow. Of course you really shouldn’t let a dog go off chasing cows.

So I was enjoying my ride alongside the Cam. It was quite busy so I was cycling at a leisurely pace.  There were two cyclists with loose dogs also cycling through. Although the dogs didn’t look vicious they were boisterous and chased after other dogs being walked on the common.

As we got closer to the railway line end of the Common I had let them past me – I didn’t want to get tangled up with dogs. The trouble is there were cows at the far end and the dogs chased into them. This caused the cows to run down the field/path in my direction. Thanks a bunch dog owners.

I hopped off my bike and held it between me and the cows – fortunately they weren't so panicked that they didn’t see me and they managed to avoid me. It wasn’t the most pleasant of experiences. in fact it is the worst experience I have had with cows. Now it wasn’t the cows’ fault.

Grazing rights are ancient rights, just as rights of way should not be eroded neither should grazing rights.  Just use common sense.

After the excitement I stopped to take a picture of a board coming down the Cam.

Boat in the Cam, Ditton Meadows 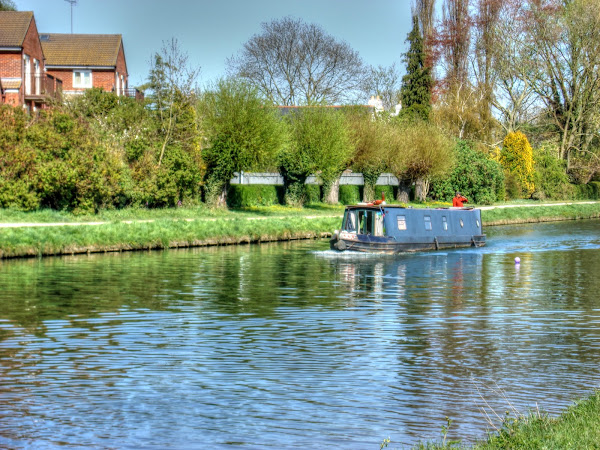 Those are the dogs - boisterous rather than aggressive. I think that is one of the cyclists.

The same scene- but the dogs have now gone into the river – it is a good place to walk dogs – plenty of space for them to get their exercise.  Also with so much space the dogs tend not to be on the paths. 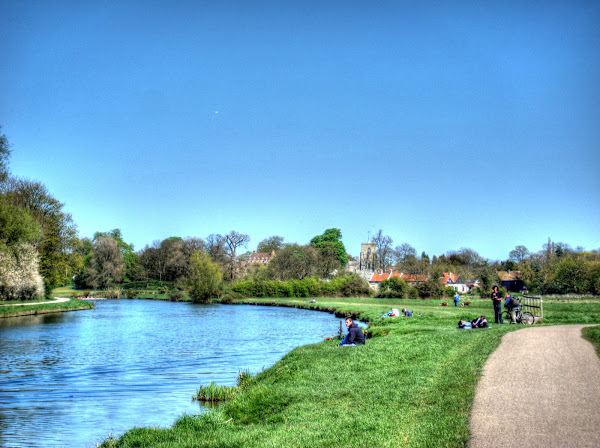 On my way through to the Newmarket Road P&R there was a guy walking through a field with a bunch of antennae – he looked as if he was doing a Geophysical survey. Was this the Time Team I wondered. They were also digging boreholes – hum strange.

Also with the benefit of zoom I could see that in the side of the white van it says: Explosive Ordnance Disposal. The firm is EOD Contracts Ltd which seems to be a subsidiary of The Pharos Group.

I had a chat with the GeoPhys chap who didn’t seem to quite know why he was walking up and down the field.  My guess is that this is to do with the Marshall’s plan to build 1,500 homes in this area. The article suggests that planning permission will be sought early in 2013. I had a chat with him and mentioned High Ditch Road

it will be interesting to see what transpires as apparently Marshalls have looked to Poundbury, built by the Duchy of Cornwall for inspiration. (The Marshall press release.)

So are they looking for old ordnance or using some sort of explosions to perform the survey? 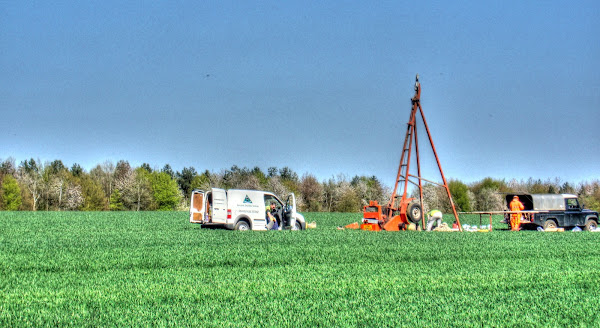 Once I reached High Ditch Road – it was time for home. 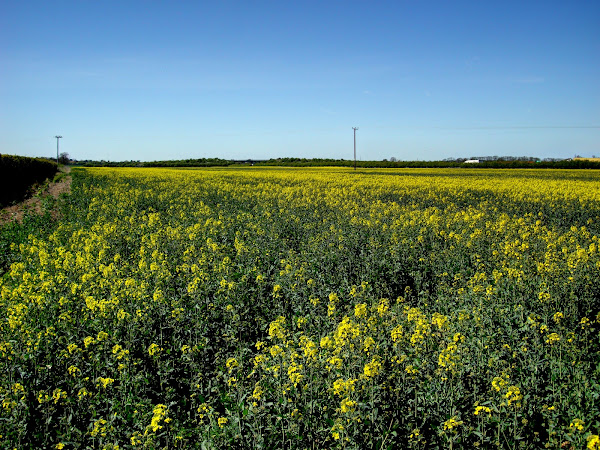 I still haven’t been out to see the Guided Busway Cycle lights in action, nor have a seen the Parker’s Piece trial.

Having mentioned the A14 – well the politicking continues – Business Leaders are now suggesting that the Government lacks commitment.