Don't worry less than two weeks to go and all being well I will be reporting (with pictures) on my journey from Bangkok to Saigon. For now though it is more "training".


After struggling with even a small amount of cycle climbing when I was down in Bath I headed for some "hills" in the flatlands of East Anglia. With my new GPS I am able to track the amount of climbing I end up doing on any run. My Wicken Fen route involves around 150m of climbing, yesterday I managed to find around 500m of climbing. The amount climbed is the total of all the small hills and rises, there really aren't many hills of consequence in the area. When I head out to the Fens my GPS records some of the route as 5m below sea level, which is why there are so many drainage ditches.


Heading off in the opposite direction I pass a Polo ground, although no-one is out there when I go by. The countryside is more interesting, gently undulating, dotted with woodlands and the occasional Ford. Most now have bridges by the side so that motorists don't get their cars wet. I normally cycle through them on warm days. They tend to be a bit slippery but I have not yet fallen in whilst traversing one, there will be a first time though. I once tried to cross a flooded road near Ely, rather a flooded stretch of road, about half a Km/ (1/3rd mile) long in the middle of Winter. As I cycled along the lwater evel rose, until, when it reached halfway up my legs I decided I'd better turn around. Because I couldn't take the short route I had to cycle another 32Km/20miles, with feet that where slowly freezing solid. 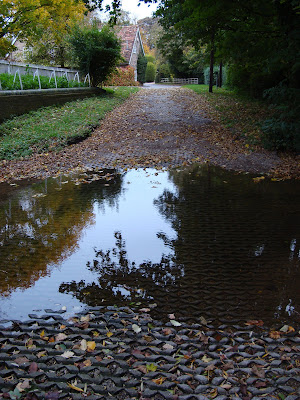 Here is the Ford, the road surface has been designed to offer some traction, but with a bike the bobbles can be just as bad. The next picture shows where you end up if you turn right, useful if you are being tracked by bloodhounds. 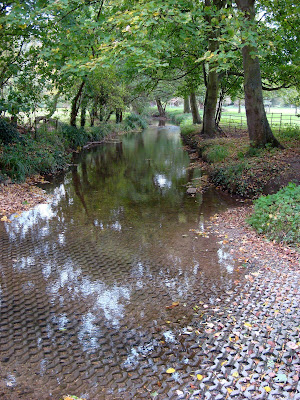 Here is my Longstaff patiently waiting for the pictures to be taken! 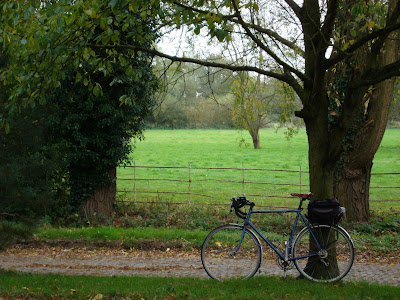 On the way through Sawston , to the South of Cambridge I saw this neat way of making sure the postman knows what the house number is! 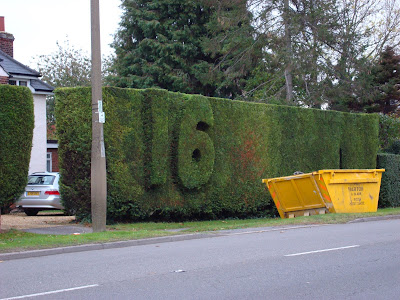 I prefer to cycle away from the noise of cars when I can. So when I am not in a hurry I usually use Sustrans routes. The route back from Sawston follows Sustrans' route 11, which apparently when completed was the 10,000th mile of Sustrans routes, well according to this sign by the side of the route. 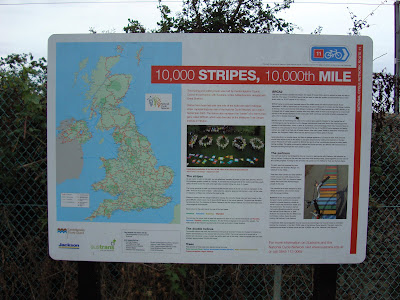 To celebrate they stuck a representation of a part of human DNA down the middle of the path, with 10,275 coloured stripes. The structure of DNA was discovered in Cambridge, by Crick and Watson, although I gather there is some controversy about the role played by Rosalind Franklin a crystallographer who does not get so much of a mention. 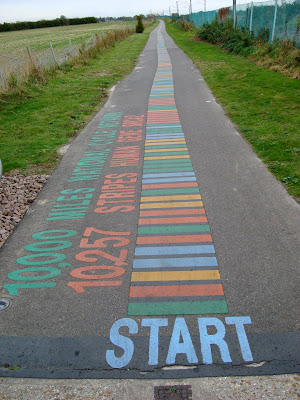 I had not realised quite how large DNA was though, how these fit into cells is beyond me :-) 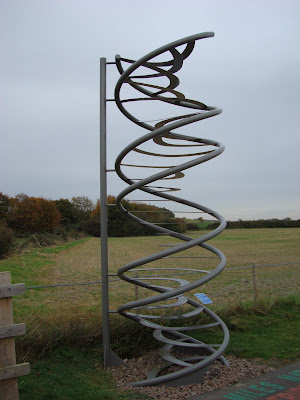 A guided busway is being built on the track of an old railway line from Cambridge to St Ives, the latest attempt to reduce the problems of traffic congestion in Cambridge. - it will end up at the Addenbrooke's hospital site. Although it looks as though there will quite a bump when the bus goes over this bridge. 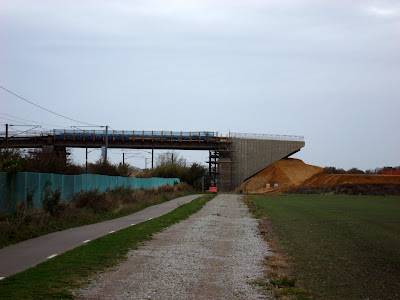 Today I went round my usual Wicken Fen route, the clocks have changed back from Daylight Saving Time or British Summer Time as we call it, so it will be darker in the evenings. Which means it is time to get out the fluorescent yellow - I also have a yellow hat. Although the Fen roads are quite narrow you can get some fast moving cars on them - more later, so it pays to stand out a bit. I also have two lights on my handlebars although I save them for when it gets a bit darker. On a narrow lane if a car is coming the other way without dipped headlights it is impossible to see anything without really bright lights. By anything I mean that you cannot even see the sides of the road, the lights also encourage the oncoming drivers to dip their lights. When I say that cars can be speedy here is an example I came across this afternoon, he must have been going round the bend way too fast, (I am just guessing it was a he - but not much doubt in my mind), or maybe he was looking for a convenient parking space. 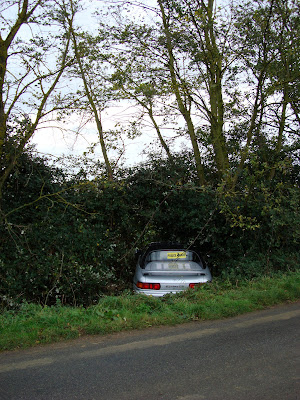 Although it had rained all morning in the afternoon the sky started clearing and as it got darker there was even a bit of evening sun. A nice dramatic sky, silhouetting the trees. 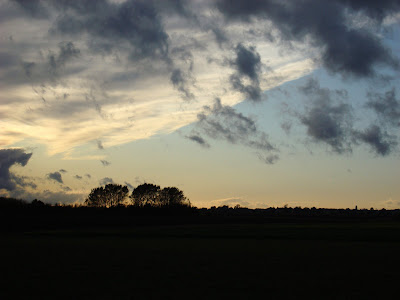 Of course the "bridge" has to feature in a picture with the evening sun behind and wispy clouds in the sky. 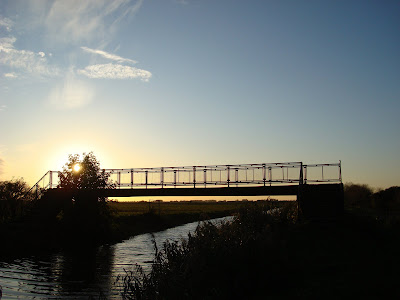