Whilst I am busy tying up loose ends, a new loose end popped up. I was in Edinburgh last night and after a most enjoyable dinner at the University I went to my hotel in a taxi, then caught up on email, which meant sitting downstairs as the radio waves couldn't seem to make it to my room. When I then returned to my room I realised my phone was missing when I tried to find it to set a wakeup alarm. It had slipped from my pocket and was still in the taxi. Short of ringing around all of the ****** taxi firms it was lost. As it was midnight and I had to get up at 4.30am for my flight back to Stansted Airport I took the easy route and rang Vodafone to bar it. Today I have been getting a replacement phone and SIM card sorted (with my number of course). It was all very straightforward, the new phone even came ready charged for instant use. Clearly they don't want to lose any phone calls.

The sunrise was great from the air - but although I often take pictures out of the plane windows, I had no energy today, four hours sleep on top of a short night the day before meant no pictures. I also found it hard to motivate myself to go out for a cycle. In the end I did, bit did a short route round Wicken Fen. I felt all the better for getting out though- but took a while to warm up and I never really got up to a decent speed. Despite the run being around 16Km/10miles shorter than usual it took almost as long. It was a nice clear afternoon evening though with the sun lighting up the clouds as it disappeared. 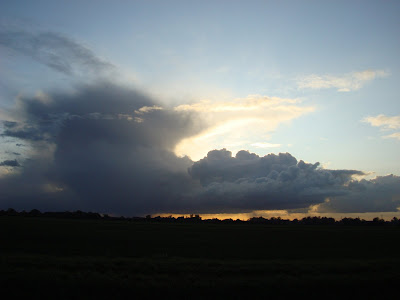 Once home my daughter and I sorted out the pumpkin - she provided the artistic talent and I cut it up. The we popped it out on the front step as bunches of trick-or-treaters knocked on the door. They were all well behaved and in costume, of course we had stocked up on treats - no tricks thank you. Here is or pumpkin, slightly blurry because I took this holding my little camera by hand, but it adds to the atmosphere.

Well I have not been there, or done it, but I have ordered the T-shirt - an email came in from Chris (organiser) asking what size I was.