Sorry about my brief absence and thank you for the good wishes. Early Monday morning I had a stomach ache (actually more a burning sensation in my intestines) which as you might imagine tied me to the house close to the facilities, plus a temperature, aching limbs and a headache. To show how ill I must have been I even lost the will to do my email. No it was not man flu and fortunately it was fairly short-lived and lifted as quickly as it came on so this morning apart from the fact I had not eaten much (plenty of lemon squash though) I felt pretty normal. A good job as I have had to head off to Bath for meetings today and tomorrow.

So I can hear you asking - how are you going to maintain your training? Well I can't hear you - but that is what I was thinking. I had two options for my trip to Bath; the preferred one was to take the train, the other one was to take the car. Normally I would take the train as it allows me do some work, is more relaxing and generally more pleasant for me and the Earth. If I take the train I can also take my Brompton bicycle (sorry no picture at the moment). It folds nicely so allows me to travel during the rush-hour. I then cycle the few miles from Kings Cross Station through London to Paddington Station and continue the journey to Bath where the hotel is a mile or so from the station. With care I can pack my computer and a change of clothes and put it into the handlebar bag. They are quite happy to look after the bike in the hotel - I don't have to fold it up and sneak it to my room. Then I also have a bike for pootling around whilst in Bath.
This time I also had to do a delivery for my Student son which I could have carried on a full-size bike, I have large rear bags (called panniers). Then I would not have been able to catch the train during convenient times. So in the end I decided to drive down, pop the Longstaff in the back of the car. Although I arrived at the hotel a little later than I would have liked, I did manage a run out of around 56Km/35miles. The delivery was some more clothes, a book and a basket of apples and pears. We planted some fruit trees seven or eight years ago and this year have had a wonderful crop of both pears and apples.
Today I have cycled over to Bristol and back along Sustrans route number 4, which I believe was actually the route whose support and creation led to the foundation of Sustrans. It pretty much follows an old railway line between the two cities. Consequently it is fairly flat and fairly straight. At times you cycle past old stations with the platform at waist level. My first challenge was finding the route from Bath, I managed to get lost twice before getting onto it. The bit before it joins the old railway line follows the river and at times as rather thin for a shared path (cyclists and pedestrians). After that though it is easy to follow and runs through some lovely countryside. The main thing though is it is not the Fens - it is great to be able to cycle along a different bit of England for a change.
I did notice a couple of things. It seemed to me that a lot of cyclists wore fluorescent yellow tops and helmets. As the path is very much a working path, one cyclists use to get to and from work they tend not to hang around taking pictures like I do. As well as the speed the track runs between runs of trees in quite a few occasions which looks great but does mean that the road surface of flat tarmac did like quite slippery in places. I did have my yellow jacket as well, but because of the speed I felt compelled to cycle at I was too warm to wear it. I also got overtaken a couple of times and just did not have the energy to overtake them - that, I claim, was just down to my lack of food over the last two days and not my inherent slowness ;-) (Readers of this blog will know it as a form of Bonking - but not a full-blown bonk though.) Actually there was a third problem on the way over to Bristol because of the time of day the sun was in my eyes making the path just a little bit harder to negotiate. Probably another reason for wearing bright clothes. I did have my red "Jelly Belly" jersey which wasn't too bad.
This photograph shows where the path follows a railway track that has not been removed- I do not think it is in use, although I did pass an old railway station with old bits of engine (steam and diesel) and carriages in it. I also passed graffiti painted on the path protesting about the railway line so I wonder if there are plans to re-activate the line at the expense of the cycle path. 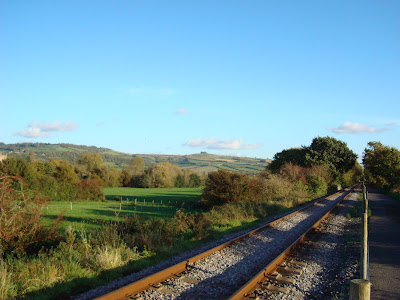 This picture shows one of the many yellow jacketed cyclists - no helmet though (or hair either for that matter). In case you are wondering I did not have my helmet - although I would have worn it had I brought it with me. 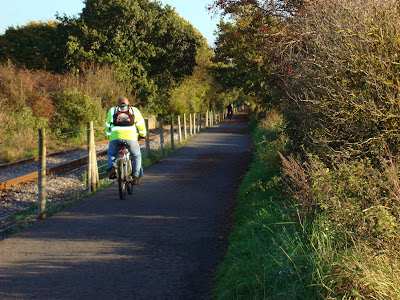 Of course I can't resist another of those gratuitous pictures of cars queueing, mind you I got stuck in quite a few one my way down today so I had a bit of sympathy for them, all anxious to get home. 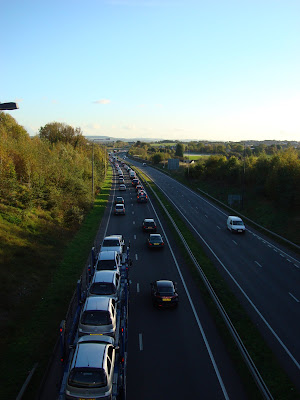 It was quite dark on my way back, I switched on my lights. I also stop at red traffic lights, in fact most I think all the cyclists who had to did so today. Bristol and Bath cyclists are more law-abiding than those in London. This picture is taken by a cyclist (me) on an old railway bridge over a river where you can see a longboat moored at the bank and a plane's contrail in the sky. Transport through the ages ;-) 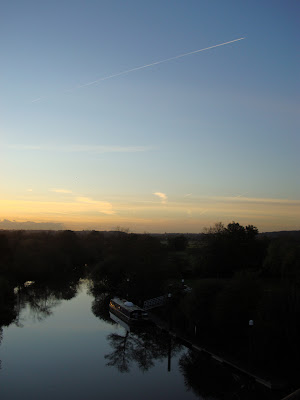