With the clock change from BST/DST and the colder weather I am going to have to think about not wearing shorts when out cycling. Actually I am trying to believe it is still the end of Summer and when I am working from home I wear shorts and sandals all the time. I get some funny looks when I cycle down to shops to buy a newspaper though. This afternoon the weather was sunny, clear, still and quite cold (8C). Nice for cycling - but the evening sun can be a bit blinding as it is quite low, later on the problem is being blinded by car drivers who do not appreciate that cyclists are human too.

I took the usual route today, I passed a cyclist on a recumbent ('bent) but did not stop for a chat this time though. (It was the chap who is helping sort out cycling with the National Trust in the Fens.) The car embedded in the hedgerow had been removed it had managed to drive in quite far, the hedge was quite deep which suggests it is quite an ancient edge.

The sun casts long shadows, but does nicely light up the trees, they look good before the leaves drop. 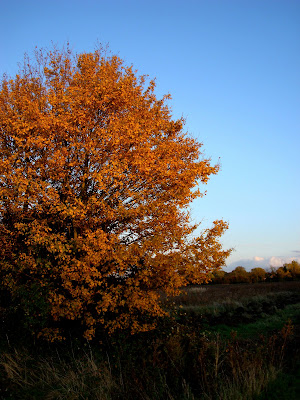 The other day I took a photograph of this windmill from the other direction. Here it is silhouetted by the setting sun with the village sign (Wicken Fen) in the foreground. There were a few telephone wires which I edited out using Picasa's patch facility. If you look closely you can tell, but when the pictures are munged by Blogger they are reduced in size and resolution so it is difficult to see much detail. If I was going to print and frame the pictures I would either try to take the picture from a vantage point where the cables weren't visible or spend lot more time using Photoshop to edit them out. 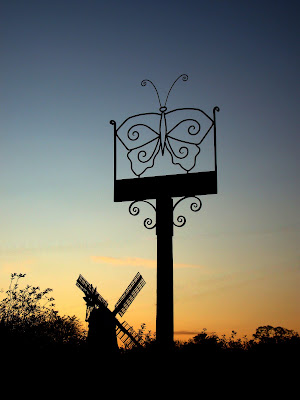 It was then a quick cycle around the corner to Wicken Fen to catch the evening sun before it finally dropped below the horizon. I had to keep the sun behind a tree otherwise the camera wouldn't focus. It is not normally a good idea to point a camera at the sun and definitely not a good idea to look through the viewfinder at the same time. 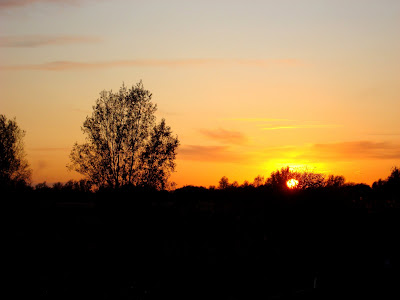 On the way back I used front and back lights (plus yellow hat and jacket), but the front one went out, so it was necessary to stop and repack the batteries - normal service was then restored.