Clear skies but I missed the Sunset over Wicken Fen

The weather is remarkably changeable round here at the moment - when I got up it was puring with rain - fortunately it cleared by lunchtime and with temperatures of around 9C I just had to get out for a spin on the bicycle. Whilst it was raining I did a bit of photograph reviewing. There are a couple of competitions on the web for amateur photographers and I had a look though my archives. One thing led to another as I was looking through my India trip pictures I also looked at my Bangkok to Saigon pictures. Which then led onto checking out the Symbiosis Travel website to see what pictures they had. It turns out that they are running their tenth and final (according to their page on the B2S challenge) B2S challenge ride ride next year in 2010. If you have half idea to do it I would definitely recommend the trip. Cycling through three countries in this way is a great way to compare and contrast three beautiful places. I would also say the Cambodians are the friendliest people I have met in my travels to date - and of course you will also be helping some charities as the run is for charity. Here are some links to pictures I took on the trip: B2S pictures 1, B2S pictures 2. The ride is pretty much flat and the visits to the temples in Siem Reap are a highlight.

Before heading out I had to wash my bike - the brakes were clogged with mud and grass, along with the front and rear derailleurs. I was surprised I did not find the cycle ride harder. When I checked out the same track this afternoon it did not look too bad. Mind you this time I cycled along Headlake Drove to get their - which has a tarmac surface and then I detoured around the muddy bit on my way up to Harrison's drove. with such a clear sky I wanted to get around to Wicken Fen to get some shots of the sunset. Even in the daylight this track would have slowed me down significantly. 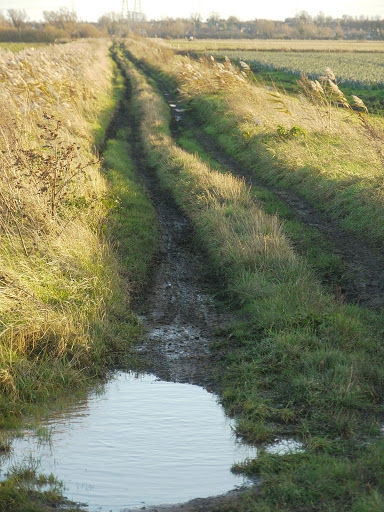 Of course "the best laid plans of mice and men". (from a poem by Robbie Burns: To a Mouse). The sun looked huge as it sank towards the sunset - unfortunately before I got to Wicken Fen. By the time I got to the spot I normally take pictures from (Baker's Fen) the sun was below the horizon and the sky did not look very interesting either. Later on as I cycled into Reach the sky was clear apart from an interesting cloud formation.

I also took a picture of some of the houses in reach silhouetted against the sky.

I must start planning my cycling for next year soon. I have hit my target of 12,000Km/7,500 miles for '09 and will probably hit around 12,800Km/8,000 miles. Which is my second highest annual mileage to date. if I am going to do some serious mountain cycling I do need to improve my power to weight ratio though. carrying a bit of extra weight in the flatlands has no penalty - it is a different matter when climbing 2000m and I rather fancy the idea of mountains. Mind you Chris (of Symbiosis) is going to cycle in between Vietnam and Laos in February - that would also be interesting!