Swarming birds and Painting with Light

Apparently we are in for some cold weather here in the UK - we might even have some snow. Cycling on fresh snow is great - somehow it feels quieter and there is just the crunch of the snow as the tyres roll through it. There is also the uncertainty of hat lies below - you have to keep your wits about you. Yesterday I went out for a spin on my bike pretty close to sunset. Here is a picture of Swaffham Bulbeck Lode taken from the Connect2 bridge, the next bridge in the sequence, over Reach Lode is planned for 2010. 2010 - less than a month away.

It was as grey as it looks in the picture - it took a bit of mental energy to get out on my bike, but once out it was really pleasant - no wind, just cycling along some of the country lanes without a lot of traffic on them. In general the only problems on these roads happen around "rush hour" - when people are heading home from work. Quite a lot of drivers think it is reasonable to zoom past with inches to spare and headlamp on main beam - after all it is only a bicycle coming the other way. 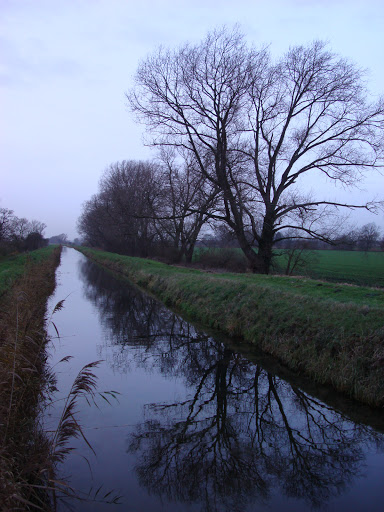 There looked to be a front moving through - judging from the sky - cloud one side, no cloud the other side - dull skies either side though. There would be little chance of a decent sunset. 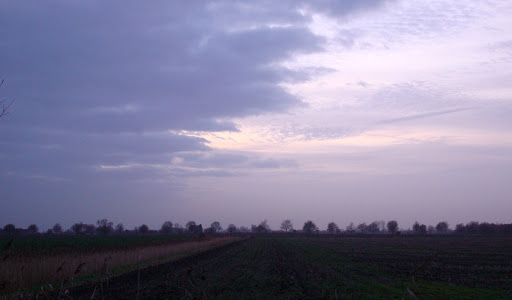 Once again I avoided the main route from Swaffham Prior to Upware and took a route along Headlake Drove, across to Straight Drove which then became Harrison's drove before joining again with the "main" Upware road. The track surface is pretty bumpy but in the main is tarmac and/or rubble rather than muddy ruts. When I stopped to take the previous picture the sky on the other side swarmed with a cloud of birds. I even managed to to take a video of it.

By the time I had gotten to Wicken Fen it was dark - which means that there are fewer people walking around - which is good. It can get quite tricky when there are dogs around in the gloom at the end of the daylight. Although in Cambridge there is a trend towards using led lights on dogs - it is rather odd seeing some red pinpoints of light bouncing around the grass. They also seem to have finally finished re-laying the path from the Fen through to Priory drove.

On a windless day it was very calm and peaceful cycling on back through to White Fen. Although I was in the countryside the orange glow on the horizon was a reminder of just how densely populated this part of England is. Mind you it was pretty dark heading back over the bridge into White Fen. In fact it was so dark I though I would trying painting with light. Basically you take a picture where it is so dark the shutter on the camera stays open and then you shine a torch/flashlight around at the things you want the camera to "see".

Here is my attempt. It took a little experimenting with the camera - in the end the camera shutter was open for a few seconds and I used one of my bike lights to provide illumination. I gave up after around 10 tries - it is quite difficult taking pictures in pitch black. I had to place my camera on one of the poles used to bar vehicles from crossing the bridge and use a delay so that camera had stopped moving by the time I took the picture 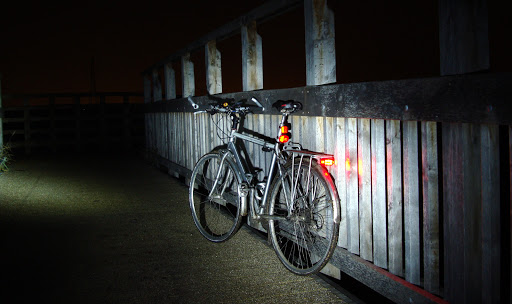 Here is a self-portrait - not quite so good - and I had to shut my eyes as the bike like is too bright to look at. 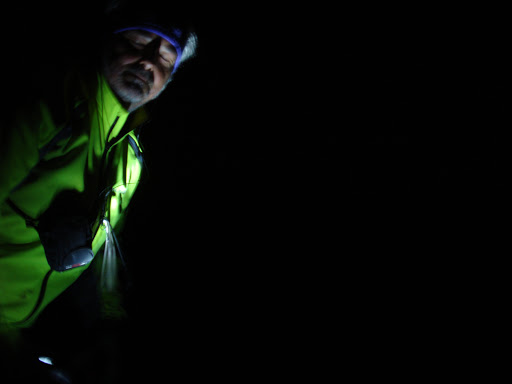 At least it was dry - it really was a very pleasant ride in the dark - dry and still. I should do it more often!