Last Cycle Ride of the Decade

For once it was not raining when I set of this afternoon and it feels good to be out getting a bit of exercise after the excesses of Christmas. I still wore some waterproof leggings though, just in case. It was not long ago when I was complaining that below 10C was cold - now I find that 0-5C is not too bad - as long as I ensure I have several layers on. Although as I sit an type this I notice that my toes are tingling a little in the warmth. I use Shimano waterproof boots for cycling in the winter. Well they are waterproof except for the fact that there is a lump of metal screwed onto the sole of the boot to clip into the pedal. I am convinced it acts as a heat sink and drain heat away from my feet as they are normally the only thing to suffer when I cycle out in the cold weather.

I did get a new pair of cycling gloves for Christmas - Altura Night Vision Winter Cycling Gloves to be precise, in fluorescent yellow. They have an inner glove and a waterproof outer glove, I find them very comfortable and when I stop to take pictures I just slip the outer glove off but leave then inner one on, so keeping a bit of warmth in my hands. That way I don't stop taking pictures just because it is cold.

I am looking forward to when the days get a bit longer though. Once again it was a bit of a grey day, but you could see where the sun was in the sky as it caused a bit of a lighter streak seen across the bleak fields. 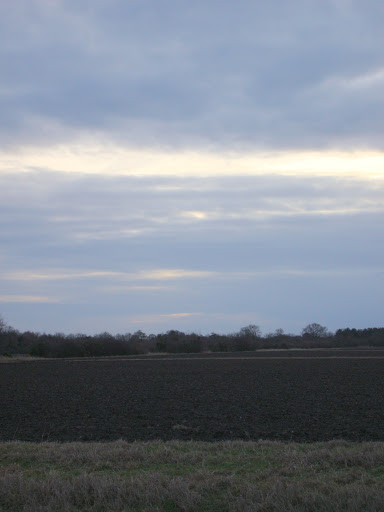 All of the recent snow and rain has left a lot of water around - the Lodes look pretty full and some of the fields are waterlogged. This is a field between Bottisham and Swaffham Bulbeck on Sustrans Route 51 with a substantial pond in the middle.

The Holiday season seems to have draw out a few cars into the countryside - I am not sure whether it is people (probably farmers) out hunting with shotguns or people like me, looking to get a bit of exercise after the gluttony of Christmas. This time around I did see a Labrador across the field. Not the most thoughtful of places to park though! It would have been even more of an obstruction for a horse-rider. I am convinced that cars seduce us into being, unwittingly, totally uncaring about other "road" users. I am sure the driver of this car did not mean to cause an obstruction, in fact he or she probably does not even see it as an obstruction. Unlike those flippin cyclists that don't pull out of the way for cars behind them! 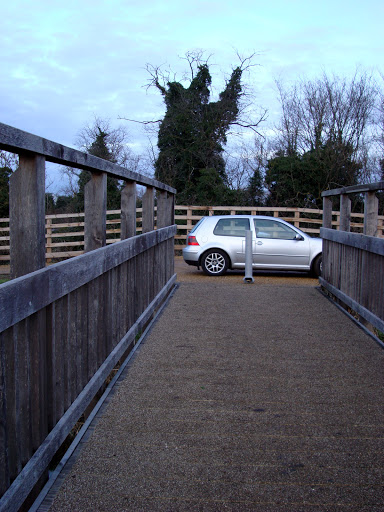 There is very little snow remaining after the snow fall before Christmas. What is left is where snow drifts have collected in the ditches. 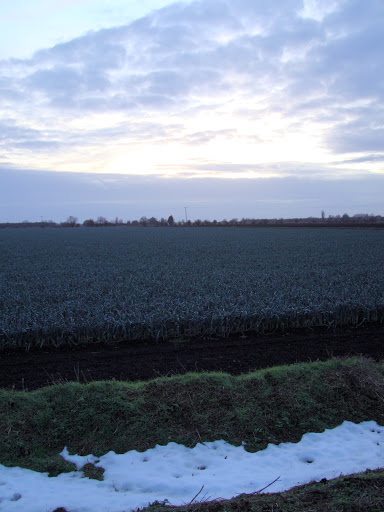 The path through Wicken Fen was still icy but there were enough clear patches that I did not have to get off and did not find it too hard. I passed some dog walkers - who were well kitted out with bright yellow jackets. They though my cycle lights were a car - although the path I was one was not one that it would be at all easy to get a car on. Mind you they did agree that it was important to have good lights out on the tracks through the Fens. I also saw my last deer of the decade - it crossed in front of me 10 yards/10m ahead as I was cycling along.

As we move into another year I now have to think about some New Year's Resolutions and set some goals for my cycling - kind of interlinked. I finished this year having cycled around 12,600Km/7,900miles which was ahead of my original plan (12,000Km) and also included 6 weeks of no-cycling when I was recuperating from my cycle accident when some idiot car driver tried (well succeeded really) in running me off the road and breaking my collar bone. This coming year I will probably go for something similar, with some mountain cycling which means improving my power to weight ratio - which means getting my weight down a bit - like Bradley Wiggins - although I never will take up cycle racing, let along the Tour de France. (ps the decade's total mileage - 87,000Km/54,000miles - which also includes a couple of years of no-cycling with a dodgy knee.