First frost and a post-lurgy ride - yes around Wicken Fen!

The last couple of days I have been a bit dull - I seem to have some mild lurgy, so I have not gone out on my bike. Although if it had been a bit warmer I might have been out. The aches and pains had gone today so despite the first frost of the year I have popped out. This morning the pavements (sidewalks) were slippery with ice and the grass had turned white. According to the thermometer it was around -1C, but not windy and later in the day the it was quite bright. For me, as long as I have the correct cycle clothing, it is actually great cycling weather.

I do need to pop into town to buy some things - but I prefer to cycle in the relative peace and quiet so postponed the chores and headed out to the Fens. The clouds in the sky reminded me of this article I read on the Telegraph web-site. Actually I thought I saw it on the BBC web site - but cannot find it there. The top white horizontal line is a contrail caused by a passing aeroplane - I think the lower horizontal line was also a contrail - but from an earlier aeroplane and one that was now developing into a cloud. 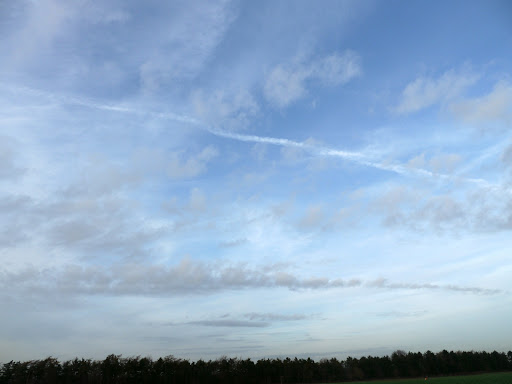 As it got later in the afternoon the sun was low in the sky as cycled though Wicken Fen - a good time for pictures of the trees silhouetted against the setting sun. 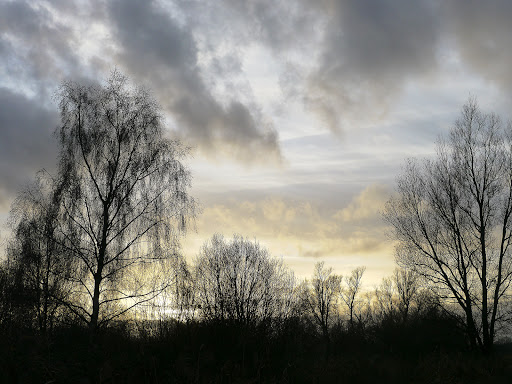 This is one a bird-watching tower in the middle of Wicken Fen. It was a good place to head for when the kids were younger - a visible goal to aim stops any hassle over the actual walking. 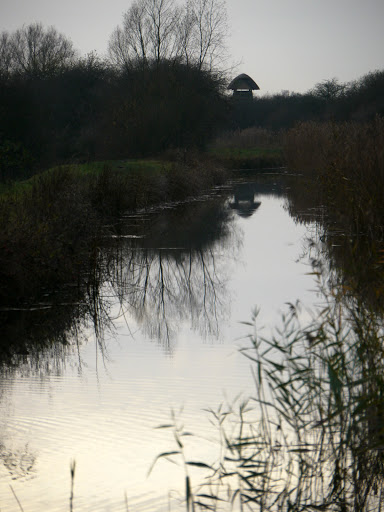 I could not resist a couple of shots of Baker's Fen with the sun setting.

Here is the second one - a nice amber tint to the sky - who needs Photoshop when there a pictures like this to be taken. 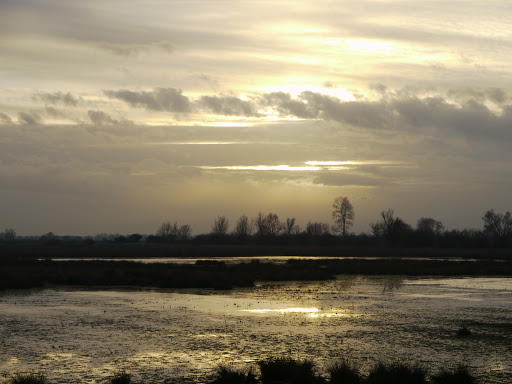 A picture of the walking bridge over Burwell Lode shows how still it was. 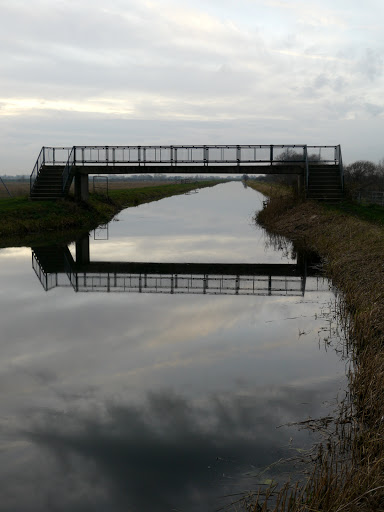 This bridge is called "CockUp" Bridge - at least there is a nearby sign to that effect. It is normally in an up position so as not to impede the passing boat traffic. It is electrically operated and today I saw it in action, for the first time. A chap working for the Environment Agency drove his van over it. This route is slated to be part of the Connect2 route being set up - but there are some challenges over how to bridge the Lode - this bridge cannot be used for safety reasons apparently. 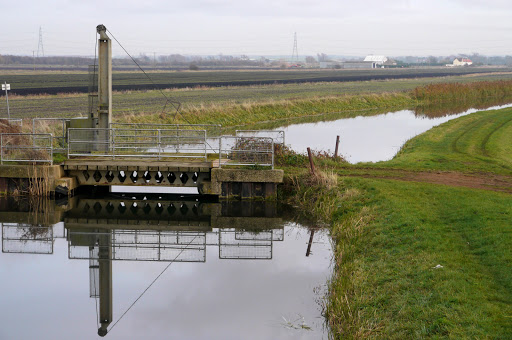 And finally there has been a program on TV looking at the challenges of cycling in Cambridge as well as the challenge of cyclists in Cambridge. Here is a video clip from the program along with a BBC East "news" piece. I think that one of the real problems is that there is little attempt at creating a mutual understanding - it makes for more interesting news to create division. So we have the classic shots of cars almost clipping cyclists and cyclists running red lights. The problem is that we have been sold on the idea, for a long time, that cars represent personal freedom. The reality is they don't - our roads are crowded and the country is already in danger of being an urban sprawl. In fact when we put in more roads we just attract more traffic onto them. So we have motorists who struggle to work each day on crowded roads, who have to pay to park and can only see the situation getting worse. So it is not really surprising that they see cyclists as far game and resent any loss of"territorial rights" to them.

Meanwhile we have some cyclists who want more cyclists on roads (safety in numbers) and resent the creation of Sustrans shared route and cobbled together paths, and many non-cyclists who quite frankly are too scared to cycle but if we had more segregated paths could be persuaded to get out on their bikes - maybe. Me - well I think that as we head towards scarcer and scarcer levels of petroleum then it will force a change of life -battery cars and the like will not be a good substitute - so we an either be pro-active or reactive - but change will happen.