Sunset around Wicken Fen, (is) Cycling (is) dangerous, Motorists still use mobile phones - whatever next

A tip for those who want to see the photographs at a larger scale - right-click on the picture of interest and open it in a new tab - it will be larger.

There is a general presumption that if we get more people out cycling then cycling will get safer. I think that is it partly because motorists get more used to cyclists and so better at understanding them and partly because there is better investment in safer cycling infrastructure as more cyclists exert more political power. However this article in the Guardian - "Are cyclist deaths really increasing?" examines the recent increase in the number of cycling deaths and serious injuries. There has been a 19% increase over a three month period comparing '08 with '09. What I noticed in the data was that it seems that the decreases in car and pedestrian deaths has been almost cancelled out by and increase in the deaths of cyclists and motorcyclists.

Ultimately I think that we have to raise the perception of the value of cycling and cyclists whilst the problem is that this chips away at the self-esteem of motorists and other motorised road users. Whilst we see professional footballers collect fancy cars, our politicians vie for bigger "company" cars and the necessity to keep up with the Joneses driving us to buy bigger and bigger cars then why is it a surprise that cyclists as a group are looked down upon.

Although perhaps one reason for the increase on deaths and serious injuries amongst cyclists is the fact that the illegal use of mobile phones in motor vehicles is increasing. The BBC website carries this piece of news - "More drivers using mobile phones since penalty change" A study in London found that despite the penalties the use of mobile phones (not hands-free) has increased to 2.8% of vehicles It was 2.6% and then higher fines and penalty points were introduced and the percentage dropped to 1.4% but has now increased. I am surprised that the actual figure is as low as 2.8% - when I am out on my bike it seems that more than 1 in 40 motorists are using there phones. The article also goes on to say that use of phones in this way increases the risk of an accident by 4 times. The challenge is that, fortunately accidents are rare and so many people will use their phones and not have an accident, so they tend to think the law is too harsh, if they also see other road users "getting away with it" then there will be a ground swell in the number of transgressors.

The problem is that we have lots of laws and the approach to policing them seems to be to use a batch mode. We have blitzes on car tax-dodgers, cyclists without lights, motorists not wearing seat-belts. Perhaps this is the most cost-effective way to keep the problems suppressed but to my mind it does make the law look a bit light-weight.

Why is this important - well another report on the BBC website - "20mph speed zones cut road injuries by 40%, study says" shows that speed really does kill. It is all very well for motoring groups to say that "no, no it is bad driving that kills". Well frankly there are a lot of bad drivers out there and when they are allowed to drive fast it is dangerous. At 30mph a pedestrian in collision with a car has a 1 in 5 chance of being killed - yet at 20mph this drops to 1 in 40. It does seem that we need to redress the balance of importance between motoring and life.

The real problem is that when I don't get out cycling I have more time to read stuff like this on the web and dwell upon it. I have not been out for a few days so today was a welcome change. Although I should mention this great blog by a guy called Doug who cycled 6000Km through the heart of the Amazon. it makes for great and inspirational reading - humm I wonder how long I could plan a trip for and get away with it?

I managed to get out earlier today and popped up to Ely on the Sustrans 51 route. This stretch of road is between Barway and Padney. It is not a through road, except to farm traffic and cyclists and so is a pleasure to cycle along. I saw no-one on it today and during the working week I find that the tractor drivers are very courteous. 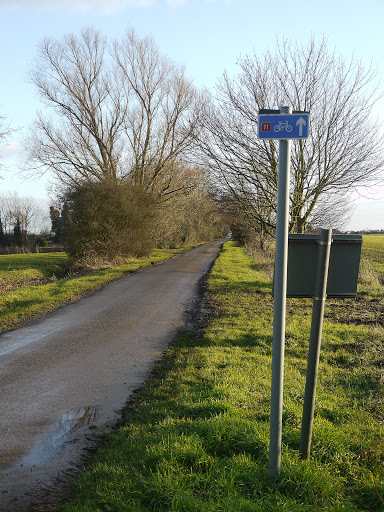 he skies were pretty clear tonight with one large lump of cloud during the afternoon. This meant that for a lot of my journey back from Ely i could keep an eye on the sun as is moved towards the horizon. After passing through barway on the way back from Ely along Goose Fen Drove this is how it looked - peeping out from under a cloud.

A further 8Km/5miles or so down the road I was at Wicken Fen - here is Baker's Fen, which features in quite a few of my photographs, this is made up from 4 pictures stitched together.

Not much further along at Priory Drove the clouds seem to have gotten much closer. 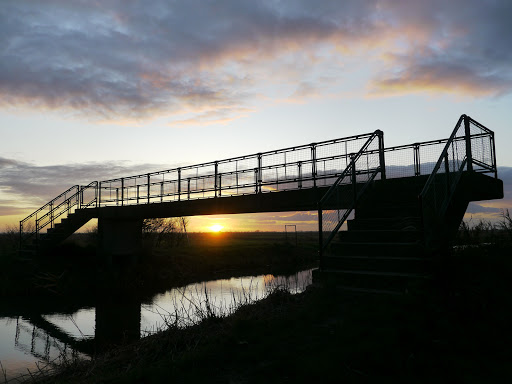 Here is a closeup of the sun with a flock of birds silhouetted to the top right of the picture. This time taken from the footbridge. 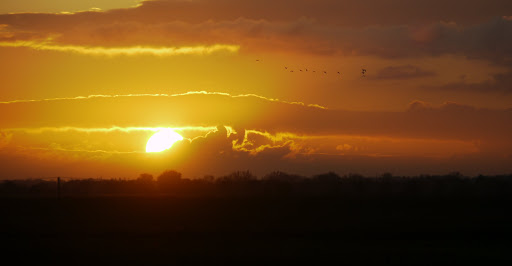 The same shot but taken with a wide angle showing how the clouds were lit from underneath by the low sun. 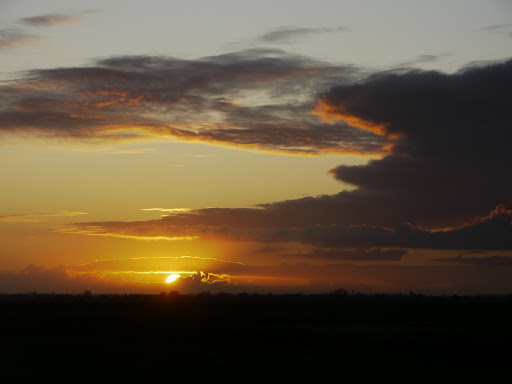 I also cycled along Harrison's drove (on the Wicken Fen side) This is looking over Adventure's Fen - the clouds make the sky look blue.

The same view as in the last picture - but with the tree in closeup - the clouds just above the horizon almost look like distant mountains - but of course there aren't any mountains here in the Flatlands. 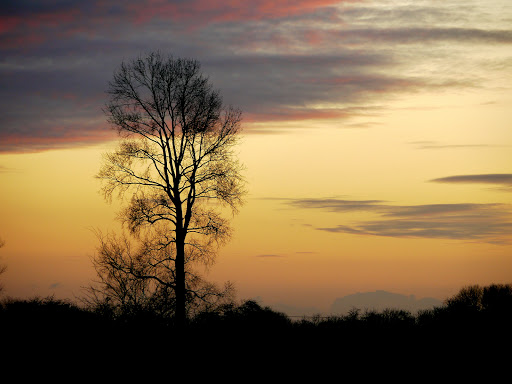 After passing through Reach at the junction of Little Fen Drive and Barston Drove the sky had turned to a purpley colour.

In closeup the silhouette of the horizon has yellow dots in it from the house lights. 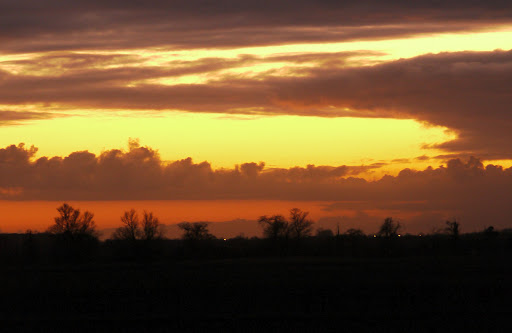 Although I have cycled this route many times I still enjoy the peacefulness of the countryside and still find myself taking as many pictures as ever of the Flatlands.