Mud and Rain in the Fens

Cycling two days in a row is not much of a record - but it was gloomy and rainy and only 3C in temperature when I went out. When it is this cold and wet I generally wear leggings as well as some form of hat. As is often the way - if you are appropriately togged up then the weather does not really matter too much. There was a bit of wind around - but not much. I went out a bit earlier today to check out the icy track in Wicken Fen to see if it was as bad as it seemed in the the dark. Well that was my intention - I headed along some almost never used droves again today - Headlake, Split, Straight and Harrison's Drove. All but Straight drove are battered tarmac and not too difficult to cycle along. Here are some leeks growing in a field alongside Split Drive. It really was as gloomy as it looks.

Split Drove was a different matter - as you can see in this picture it was chewed up mud ruts. When I could I cycled alongside or in the middle on the grassy bits. I should really have taken an MTB with some gnarly tyres - but isn't hindsight wonderful! Actually in the "daylight" it was not too difficult although there was one bit I walked as it ran right next to the Lode and I did not fancy an icy swim miles from home. 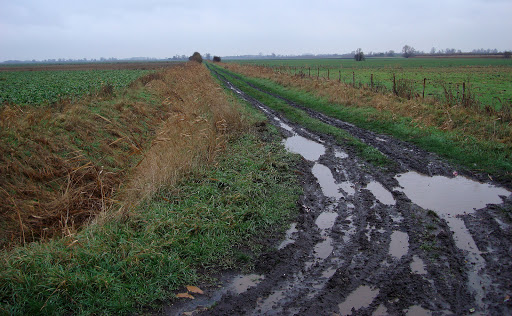 By the time I reached Wicken Fen I had to turn my lights on to see and there was still ice across part of Sustrans 51. This time it was a bit lighter though and so I was able to cycle pretty much the whole way - occasionally having to cycle on the grass at the sides - although here it was still frozen compared with Straight Drove.

A quick update on the Windows 7 front - I have pretty much got things to normal and re-started weekly backups. Although the first one took ages - around 24hours it seems. It is always the minor things that annoy you though. I use sticky notes to, well, make notes - I have a Wacom Pen Tablet - it makes editing pictures much, much easier. When I used to design silicon chips I used them all the time and use the pen instead of a mouse on my Desktop computer. The great thing was I could write directly into the Sticky Note and leave a hand-written note - that facility seems to have been dumped on Windows 7. Although reading between the (help) lines actually it is only available for Tablet PCs - so it would seem to be an arbitrary product decision. The other minor niggle is when installing programs and you get the inevitable pup up box asking if you want to go on the pen will not select the yes/no boxes I have to use the cursor keys. Ho hum.