I was told that stress is caused by a bad situation that you cannot fix - where if something bad happens, but you can sort it then actually you lift your mood - no that is an over simplification but in the time I have been driving (cars and motorbikes), for me it has moved from a pleasurable activity through to a utilitarian activity. I drive to get somewhere nowadays, gone are the days when I would head up into the Mendips for a quick spin (drive) just for the fun of it. I guess that Road Rage happens when stress builds and the individual is incapable of "keeping a lid on it". The majority of people might feel angry but just move on, some people don't Normally you tend to hear about road rage in motorists - but the Cambridge Evening News reported "Road rage cyclist punches a hole in a car window and fled the scene bleeding". There are several strange things about the report - how on earth did the cyclist manage to punch a hole in a car window? I am not sure I could punch a hole in a car window - but it is bound to be something that'll sting in the morning. If you read the comments then some suggest that perhaps the handlebars were responsible and that there was provocation because the cars had crowded the bike off into the gutter. I will probably never know what lays behind this incident but it certainly highlights the car-cyclist divide when you read the comments. And therein lies the problem too much animosity. The Guardian's Bike Blog has some good advice for the road rage cyclist though - "don't get mad get even" - my paraphrase - the gist was to report the crime rather than exact you own justice.

Mind you the Guardian has an article that suggests that cycling puts you in a better mood than driving - "Two wheels good, Four wheels bad" - not that the Road Rage Cyclist would agree. I tend to agree though - today more than two factors were against me - wind and rain and cold - yet once I was out cycling it felt great.

Some of the blame must lie with the people who plan roads, I have highlighted this particular junction at Lode before. If a cyclist is riding on the road then the island in the middle of the road becomes a pinch point. I know form experience that many motorists are unable to judge what speed they are doing with respect to a bicycle and will quite happily swerve in front of a bicycle just as they both reach the island. The driver probably does not give it a though after all he pays road tax and has a right to the road unlike the cyclist! Meanwhile the cyclist consider how close he/she came to death or serious injury because a motorist could not be bothered to suffer a small delay. As you can see in the picture the rules of the road do not allow parking so rather than walk a short distance around the corner this van driver parks on the shared pedestrian/cycle path. After I took the picture he drove a short distance along the path and blocked it completely (it was closer to the island.)

A Blog I read regularly dwells on the poor lot of cyclists compared with our car-centric society: Crap Cycling and Walking in Waltham Forest features the issue of pinch points in today's post. I would like to know how many accidents occur precisely because the Islands have been created. Especially as according to the Daily Mail "1 in 20 drivers Twitter or use Facebook whilst driving". No wonder they don't see us poor cyclists - even when wearing fluorescent yellow clothing! Come to think about it - that van driver's employers are keen that he is seen when standing in the road - they have outfitted him with a fluorescent orange jacket. The BBC has reported on 2002 on "The great cycling gamble" - where one person (expert) commented that some traffic calming measures actually put cyclists in increased danger. So why I wonder do we keep using such measures. In fact they really don't help to keep the drivers calm either. 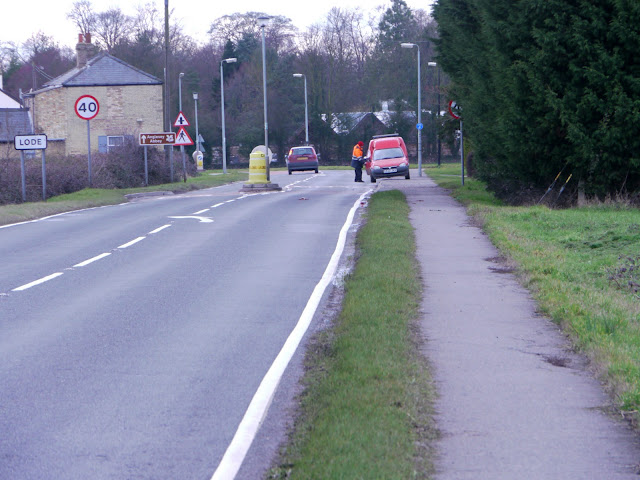 Thinking about the issue of cycling and how dangerous is it really the Times reports that some of the "rise in cyclist deaths" might be caused by more beginners taking to their bikes. Sounds worrying doesn't it. Perhaps we should ban beginners from the roads? If you look at the number of cyclist deaths in 2009 it is reported by RoSPA as 136. whereas in 2000 a BBC report suggested that "1,000 die from stair falls". Phew in the short term we probably ought to make it a legal requirement to wear a helmet when ascending or descending stairs and in the long term ban stairs completely.

Whilst I am having this rant - I noticed an article in the Guardian - "The UK spends "£500m on car advertising" - a pretty amazing amount that at the end of the day anyone who actually buys a car foots the bill for. I am sure it must be cost effective, otherwise why would the car manufacturers do it - but is does seem a bit like an armaments race - if you don't do it you lose, if you do it you hike the cost of the cars.I am wrong in thinking that is essentially wasted money. (Ignoring the Keynesian multiplier effect - the money might just be spent on something more appropriate for UK plc's long-term future.) What has happened by our seduction into a motoring lifestyle - we've all got fatter according to the BBC - oh yes TVs are to blame as well.

Mind you I think eating has got something to do with it - I am cycling for 2 - 2.5 hours a day 5 days a week but not getting any slimmer! Talking of cycling, it was around Wicken Fen again. The skies were nicely dramatic though - this is baker's Fen (again). 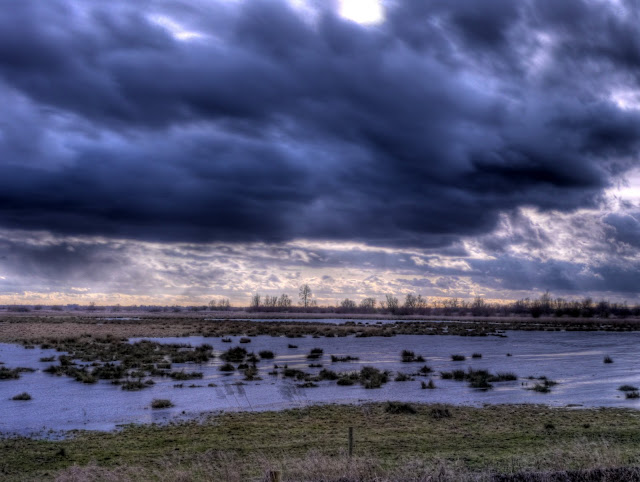 Baker's Fen with the sun in the picture as well. The bad news was that the wind was against me for the cycle ride back. 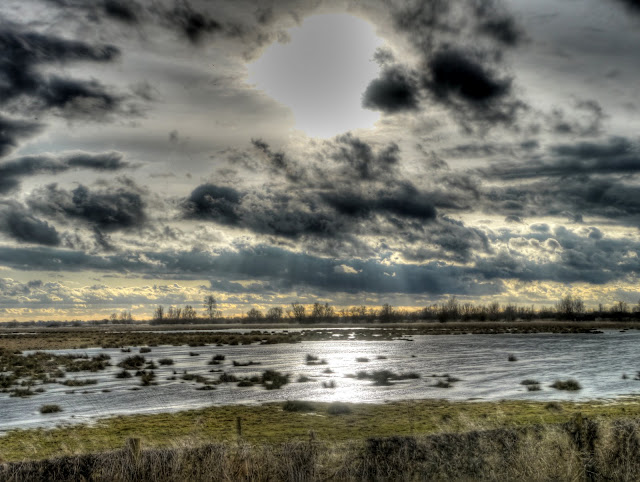 I did pass a few deer just on the way into Lode (the village) though. 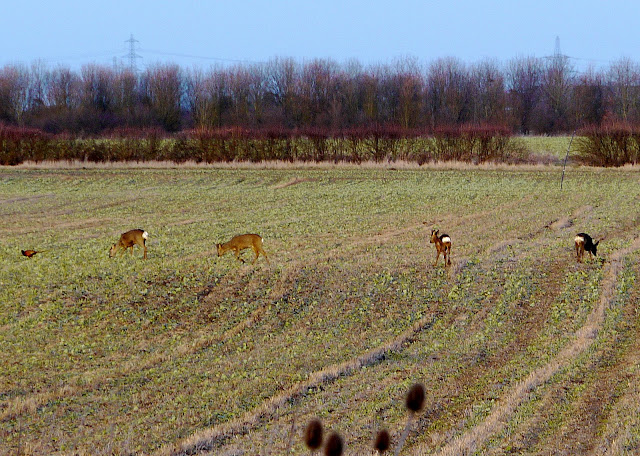 TI was going to mend the puncture on my Marin when I got back - unfortunately the ride took longer because of the wind and... I couldn't be bothered - oh well there is always tomorrow.