The weather still continues to change on a daily basis - it is normally cold overnight and we often wake to frost and a sprinkling of snow and then the sun comes out. It does not actually get very warm though and as soon as the sun goes down it can feel very cold. So cold I generally wear too many layers of clothing and start sweating before I have left the house.

I would also not want to cycle behind myself, why, well I am afraid I tend to use the same cycling clothes each time I go out. At the moment this means: cycling boots, waterproof socks (sealskinz), padded Lycra cycling shorts, long-legged bib tights, thin shirt, thicker long sleeved shirt, fleece top, fluorescent yellow jacket (waterproof), buff round my neck, headband, fluorescent yellow hat, inner gloves and fluorescent yellow over gloves. If it is raining or snowing I also wear a pair of waterproof leggings. This is plenty warm enough when if it is a few degrees above freezing, but after dark and in the wind my feet tend to get quite cold.

The problem is that I tend to wear the same gear for a few weeks - only when cycling of course. Why? well I don't have loads of cold weather cycling gear 'cos it is not really that cold here in the flatlands of England so if it were to get washed after one run I would find myself running out of cycle gear. So once you decide to wear it more than once then you have set the precedent and can wear the same gear time after time... I do always have a shower or bath after cycling - you have to when wearing whiffy clothing. So you have been warned - if you follow me too closely.

I did have to use a different pair of "cycling tights" though. The pair I had been using, which were probably 10 years old finally wore through in the saddle area! Actually rather than a slight hole they had ripped apart and so had to go. I have worn them more this winter than in the previous ten years put together I think. I make no apologies for the Lycra though - it is very comfortable to cycle in and with attention to layering is warm as well. Mind you if I were going to a meeting then I would wear normal clothes and cycle more slowly.

When I came to write this post I had another problem. I use McAfee Anti-virus software to help keep my computers safe from infection. I used to use Symantec but after several problems on a few computers I ran a trial of McAfee and found that it seemed not to slow my computer down as much as the Symantec software. It has also been much easier to maintain. I am the sys admin in my family and keep the family laptops going. I have run McAfee for a few years and have been quite happy. One problem I have had in the past is you get a false-positive from the checker. Essentially this means that the Checker recognises a perfectly safe file as being infected and so quarantines it (moves it into a directory where it cannot be used). This happened to me on Saturday - one of the files used by Zoundry my off-line Blog editor was detected as being infected and sent to Coventry, sorry Quarantine. This meant that Zoundry would no longer work.

I submitted the file to McAfee, after some searching to find out what to do. After 24 hours I got an email saying the file was clean. Hum I knew that, I wanted them to stop it being flagged as being infected and moved. McAfee have a CHAT facility where you get to use IM to work with one of their support "experts". The first complication was that their Website was running like a drain (technical term for very slow). I left it and returned after a few hours. When using chrome as my web browser if failed to do anything so I switched to Internet Explorer 8. (I don't normally use IE8 because it too seems to have drain-like properties compared with Chrome). This time software down-loaded, starting installing and then crashed.. At this point I filled in an email form, feeling rather exasperated complaining that CHAT did not appear to work.

I tried CHAT again and as is the nature of software of a certain quality it worked. At this point there were only two people in the queue (line) ahead of me. After a short wait my turn. When you invoke CHAT you have to provide a description of the problem, when the CHAT window opened the first question is what is the problem. I answered and the Support person hung up - or at least that is what seems to have happened - maybe a network problem? I tried again, waited again and got through. Re-typed my problem again (twice) answered a few questions - fortunately none of the please re-boot facility. The answer - contact another part of McAfee!!!!!!! So I did.

To be fair - they always sent acknowledgement email of the problems and CHAT did connect me with a real person, (at least that is what I think) who was very polite. But it felt as if they are working from a list of questions and did not really have the experience to help me? This morning I also got a follow up email to mine complaining that CHAT did not work. Again it was very polite, but listed 17 questions, some with multiple parts, many irrelevant to the actual problem I had - but trying to create a thorough checklist I suppose. In the end I have disabled the Virus Checking and put the file back into the appropriate Zoundry directory in order to write this post.

So on with the Post - I mentioned having a chat (not software support but real) with the guy repairing the Lode banking around the Fens - here is his digger - you can see just how muddy and slippery the top of the bank - even with a digger. 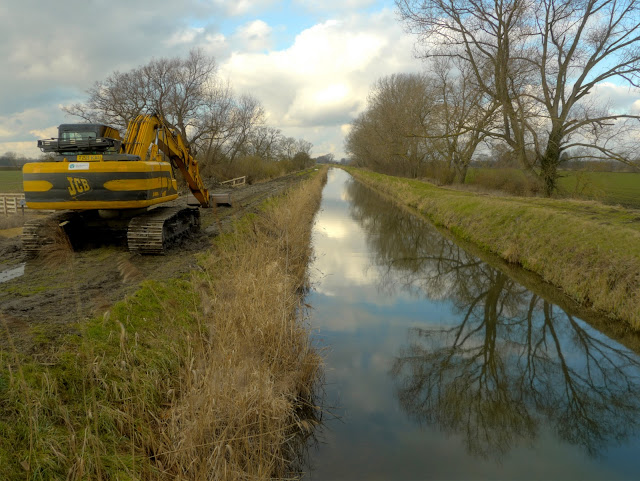 A bit of bank repair he did earlier by the old bridge..

Although it was sunny there were also quite a lot of clouds about and many of the fields were water-logged- we have had quite a bit of rain recently - at least for these parts of the UK. 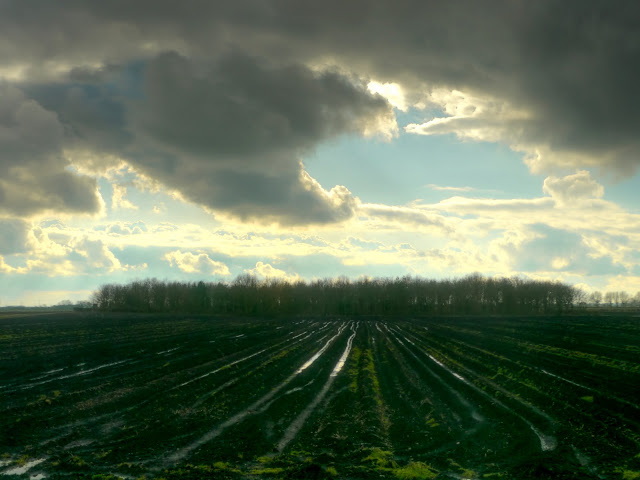 Ely Cathedral lit by the winter sun taken from the edge of Wicken Fen village. It is around 8 miles/12Km away as the crow flies. 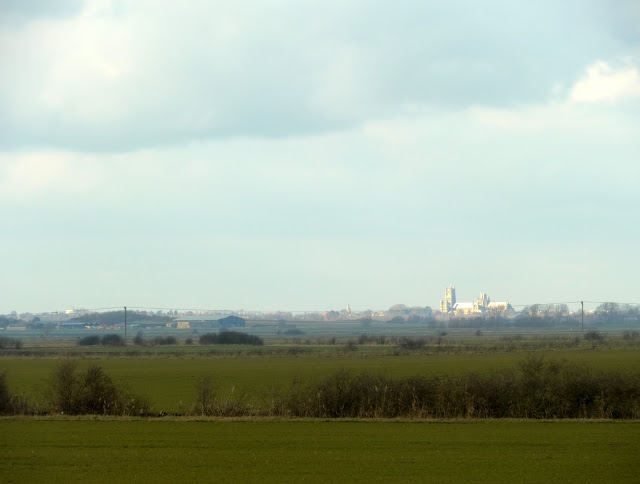 Looking back along the Sustrans 51 route on the outskirts of Wicken Fen Reserve - blue skies and soggy fields. They have also cleared all the bushes away from near the path. I wonder if it is to stop the ponies from congregating around the path. The path into the Reserve from the village end is getting worse and worse. It is very slippery and causing problems for walkers and cyclists alike. As I was going through I was so busy concentrating on picking a route through that I almost failed to see someone picking a walking route on one side of the path and their dog picking a path on the other side of the path, connected by a lead. Nothing untoward happened though I was going pretty slowly and the dog did not mind crossing the mud. 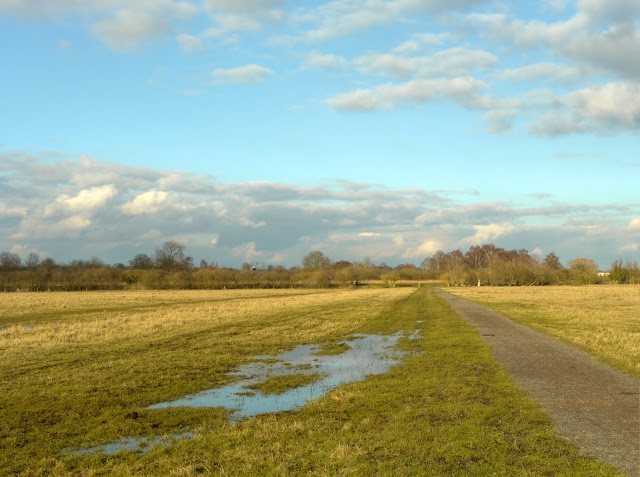 This picture is taken at the swing gate keeping the ponies in, but allowing walkers and cyclists out. I took it because of the unusual shaped cloud - but on looking at it on my computer the fence looked quite interesting. 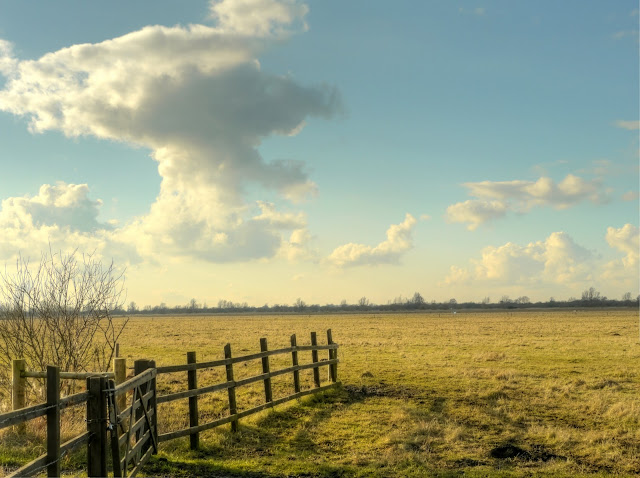 I also cycled up Harrison's Drove a pretty grotty bit of tarmac where people walk their dogs when it is very muddy. It is quite a good spot for bird watchers as their are hides along the path (just off actually). The fields all around are very wet. 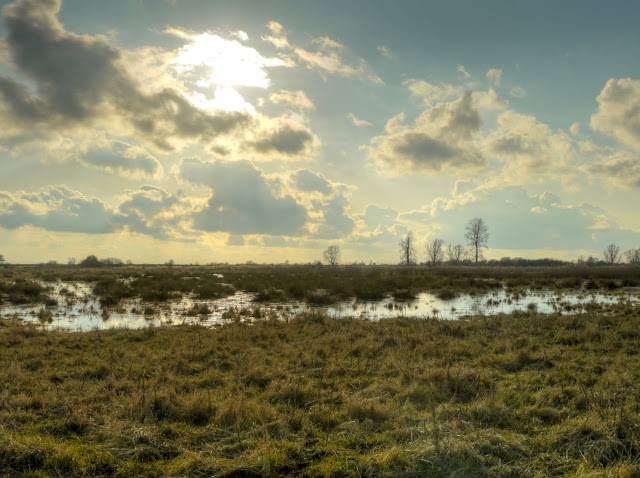 On the way back I thought I would get a few pictures from Tubney Fen - the National Trust have put in a lot of provision for visitors, I appreciate the cycling facilities, but they also have quite a lot of places for bird watchers. This picture is taken from the newly built hide at Tubney Fen - blue skies again. 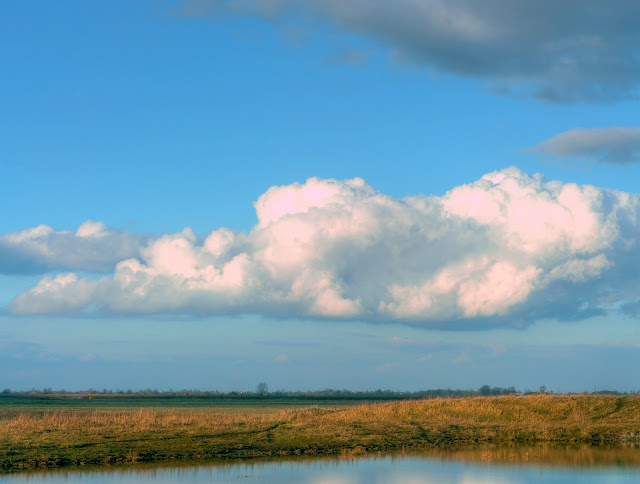 Looking at the sun setting from Tubney Fen 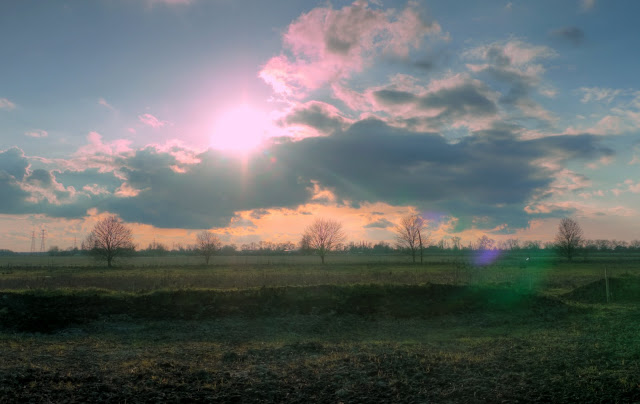 Here is the Tubney Fen hide - a pretty substantive building with different height benches - family friendly. This picture shows HDR photography in action. Normally the camera would not be able to take a picture showing the interior and exterior quite so clearly. At this point I also altered the settings on my camera - not deliberately though. I altered the white balance - a control that the camera uses to asses what overall colour the picture should have. This is important because daylight is different from fluorescent light or incandescent light. Our brains automatically adjust for this but pictures don't. I had to play with the colour balance of the rest of the pictures so they looked passable. 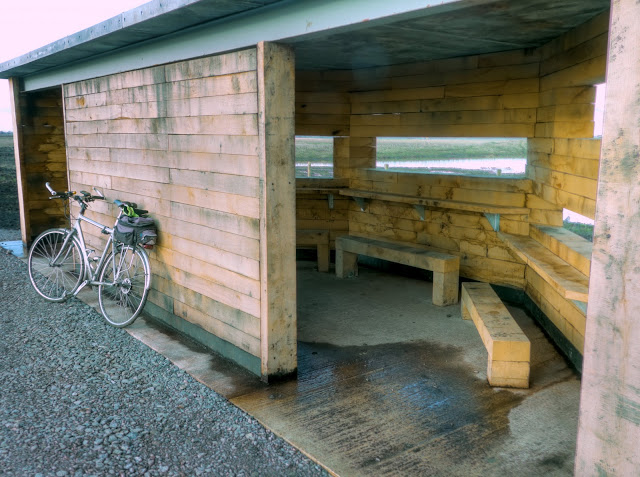 I also popped up Split Drove to Reach lode to check out the new bridge works (as part of Connect 2). The challenge is getting the vehicles in along the farm tracks. They are re-directing the footpath for a brief time. 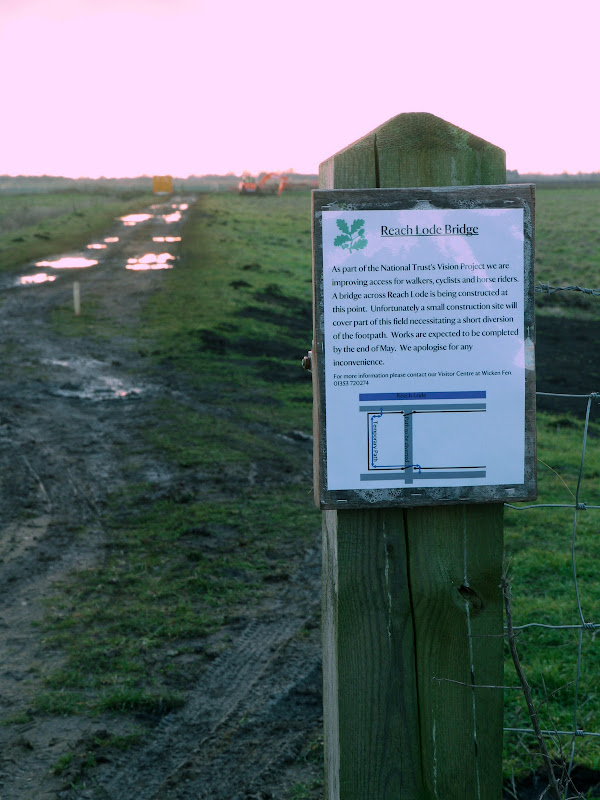 On top of the bank alongside Reach Lode Fen - there will be a bridge across here soon! 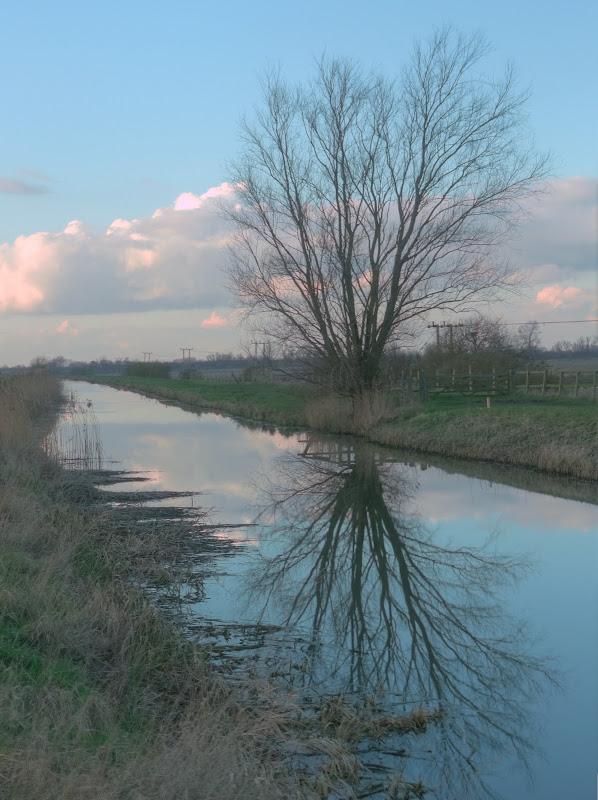 Looking back down Reach Lode towards Reach. 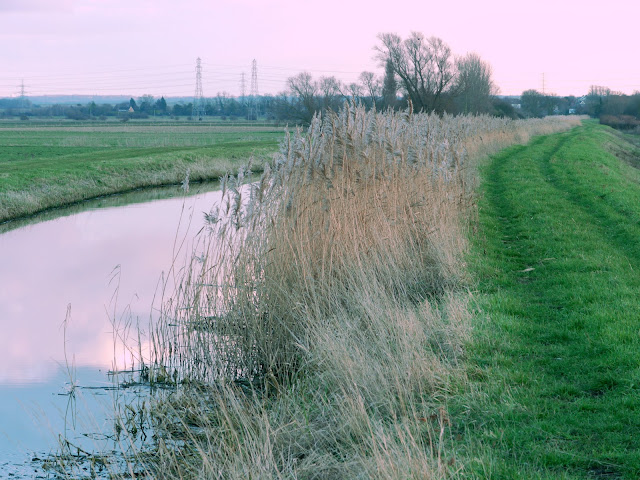 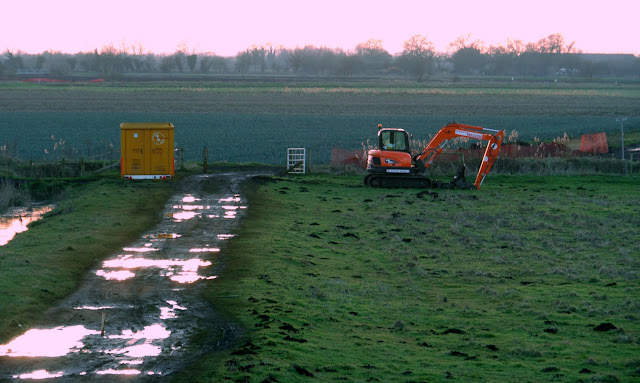 On my way back through Burwell I must have switched to stealth mode. As I was cycling along the road , fluorescent yellow hat, gloves and jacket and front light a car driver (a she!) looked directly at me and the pulled out in front of me. Two possible reasons - cars have more entitlement to the road or she failed to assess my speed. I think it was the latter reason - although there are times when the first reason is more likely.

On my way back from Lode to Cambridge as I approached a junction a car behind me pulled alongside me and since there was not room for it to overtake me pushed me to the side of the road foiling my turn. Why - well cyclists are second class citizens. (A he this time!)