Gadgets and a grey day - time for a bit of planning

The day started off less than promisingly - Microsoft had kindly delivered an overnight update - which had re-booted my machine. When I logged in Zoundry did not work - a missing file - which McAfee my virus checker seems to have removed without a trace. I had a Skype call at 9am and managed to get that all up and running and have some breakfast. Ready for a chat at 9am. The hour-long conversation was only interrupted once, my ADSL box decided to let go of the connection and needed to re-start. Fortunately it was up and running again pretty quickly. In the end I reloaded the Zoundry application, which restored the program and did not trample over the data - which is how I come to be writing this post.

Pretty soon it was time to cycle over to Reach for my re-scheduled meeting that fell foul of the ambiguities of the English language. When next Friday can sometimes be construed as in the week after next - trust me it can. I wanted to go a somewhat longer way although did not have time for a full run out if I was to get there on time. Unfortunately a mile/ few Kms out I punctured - a slow one - but definitely one that was going to go down all the way. It as a split decision on whether to return and pick up the car, return and pick up another bike or stop and fix the puncture. I would normally fix the puncture and yes I did have some patches and a pump with me, but did not want to arrive for lunch with muddy hands. I did not want to drive so I turned around and cycled home on the remains of the air in the tube. BY the end I was having to lean all of my weight to the front of the bike. So I switched from my general purpose Marin to my touring Longstaff and set off again.

A bike with drop handlebars is generally quicker and my Longstaff is certainly quicker than my Marin (which has quite an upright position) and so with a few shorter-cuts I was able to get a reasonable ride in and still get to the pub on time. The Fish and Chips were delicious - thank you Kevin. There was not time for too many photographs, but here is one showing how grey it was - warm mind up to 10C. On a grey day the chances of rain are quite high and it rained on my way back from lunch not enough to justify stopping to put my waterproof leggings on though.

This is the taken from White Fen looking at the entrance on the Lode side. It looks as if a bit of the fence has been borrowed - firewood? You can tell that there were wooden slats in place because of the wear patterns and nails on the upright posts. 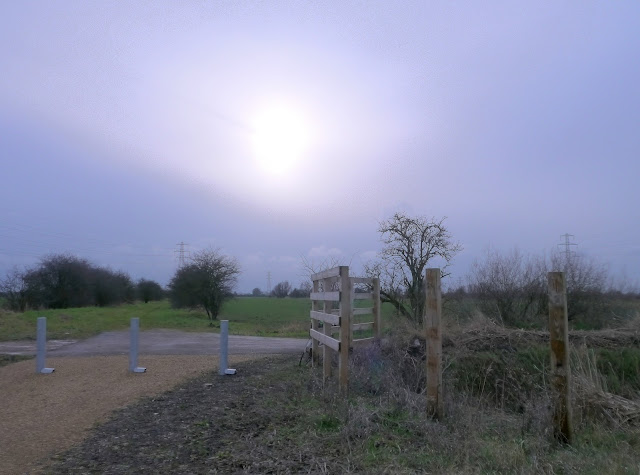 When I got home I noticed that my Garmin GPS unit appeared to show a fairly full level of battery charge. Hum strange and thinking about it there had been no lower power warnings during the day. When I connected it up to my desktop computer to download the days ride there was no communication. After a bit of fiddling - plugging/unplugging I re-booted my computer which seemed to fix things. I must keep an eye on it to see if the false battery warning messages have gone away.

One think I have been perusing though is my Bike Events calendar of rides for 2010. They run a series of recreational and fund-raising cycle rides including the London to Cambridge ride, London to Oxford, Norwich 100, Bristol 100 etc. I enjoy looking through it and will put one or two in my diary and some years I also cycle on them as well. My experiences have been of well organised rides, well signed with appropriate rest points. Last year I rode the Norwich 100 for a second time (that is 100 miles there is also a 50mile run on the same day). I have also cycled the London to Cambridge ride which is usually very popular. This year I am thinking of riding on the Suffolk Coast ride, the longer one is only 60 miles but it would be an interesting bit of countryside to explore. I would also like to find an off-road route to cycle on this year somewhere not too far from Cambridge. Depending upon the dates I also plan on either the London to Cambridge or the Norwich 100 again. There is a good sense of camaraderie and there is always someone to chat to as you cycle along.