In previous posts I have mentioned that Cambridge has (or will be) the recipient of some Cycling related grant money as a Cycling Town and that a program of various works has been planned and publicised by the City Council for comment. I recently visited one of the areas planned for improvement and on which the council was due to deliberate - Gilbert Road. That deliberation was yesterday (or thereabouts) unfortunately the plans have been put on hold because of complaints that this will take away on-road parking. (Despite the fact this is a road where the houses appear to have decent front gardens and driveways.) The Cambridge Evening news reported the meeting. I am concerned that "on hold" means that they will drag and then be quietly forgotten about - democracy in action eh. It turns out that although a majority of the residents on Gilbert Road were against it 92% of respondents who did not live in the street were for it. More surprisingly whilst one local school was for it, a nearby Primary School - Mayfield was against it as they were concerned that there would not be drop off points for for parents to leave and collect their children.

Another report on the BBC website noted that there is a rise in the number of death certificates citing the cause as obesity. All this at a time when concern is growing about the obesity time-bomb, people complain about the awful congestion in Cambridge and the fact that children do not get enough exercise. So what do we do - well we get very NiMBY-ish (Not In My Backyard) and want to hang onto our car-centric, way of life and fail to make any decision. Although it would be a pain to be without a car I almost look forward to the day when petrol gets really expensive again.

One thing about my cycle ride today- it was quite warm, around 8C or 9C I think and do you know what? As I was cycling my spirits were definitely lifted. It was an unexpected pleasure and almost seemed as if spring was on its way. In fact when I set out there were also puffy white clouds in a blue sky. This picture was taken of Bottisham Lode just of Lug Fen Droveway by Vicarage Farm. It is a no-through road, but I was going to take pictures of the well repaired banking - closer to Lode (the village) it has not been covered in grass - but in the end I took pictures of the clouds reflecting in the water. The trees look as if there is a strong prevailing wind bending them - but it is not something I have noticed before. 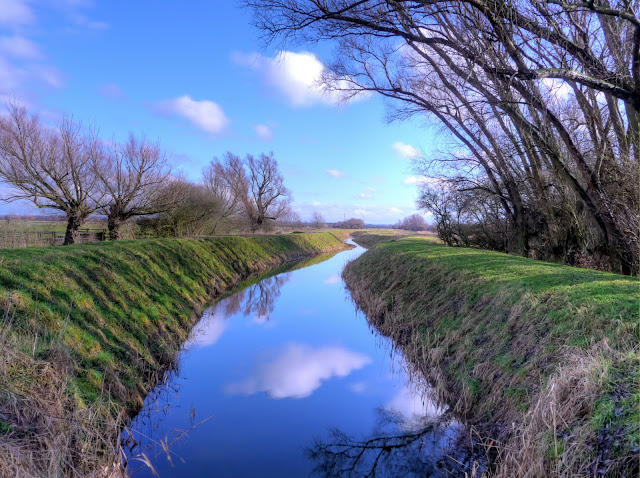 I am going to pop along Split Drove to check out how the new bridge construction is progressing every now and then. Another opportunity to take an HDR picture of the clouds above Commissioners' Drain. 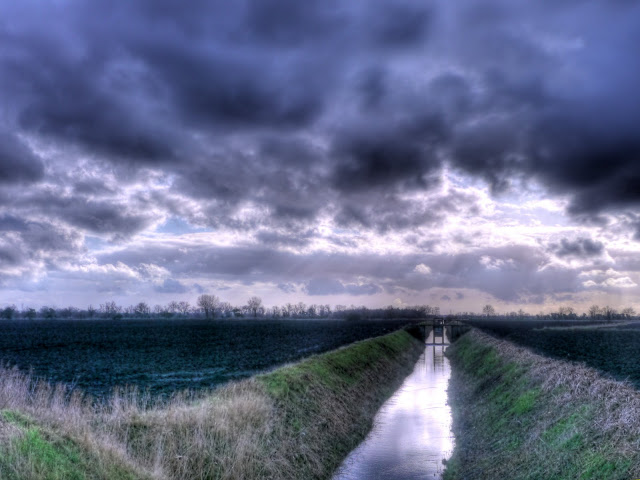 This is the road down to the bridge site- Split Drove. They seem to have filled in the trenches dug at the corners, and I passed two vans and a lorry as I cycled down. You can see the site at the end of the road. Parts of the road have a topping of liquid peat mud though. I am looking forward to drier weather so that I can cycle on some of the bridleways and byways again. I don't mind a bit of mud but it is slow hard work cycling along a deeply rutted muddy path. 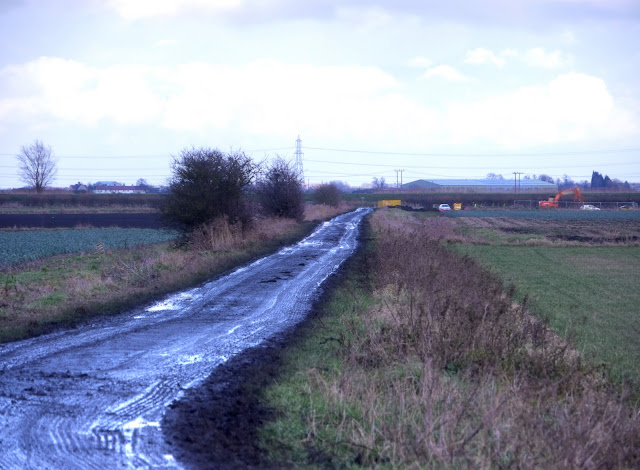 Whilst standing on Split Drove I noticed a digger in the distance on Swaffham Prior Fen working on a drainage ditch. I would imagine the wet weather has increased the importance of the ditch repair work. The village in the background is Reach - centred on slightly higher ground - seems sensible. The foreground is called Swaffham Prior Fen. 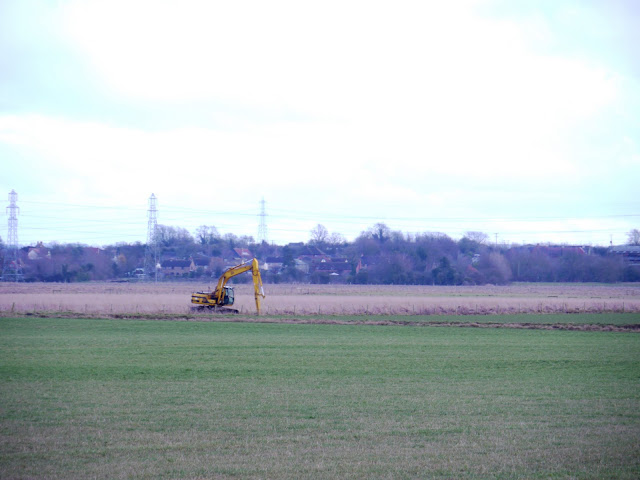 Whilst at Split Drove I also took a picture of one of the water control gates on Commisioners' Drain. Just behind it is the Great Drove road with a bridge over the drain. 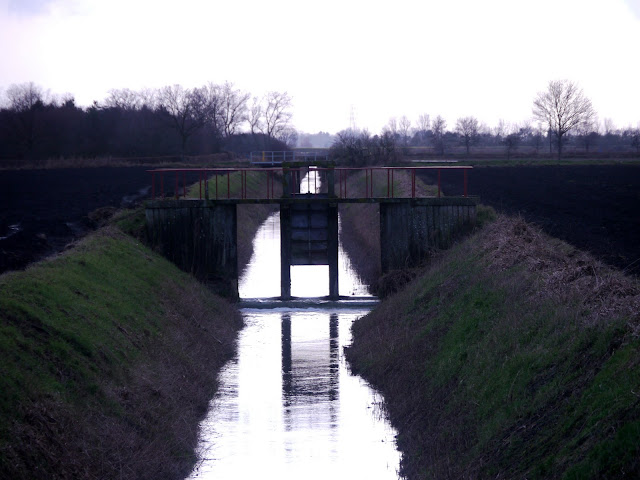 The path alongside the Wicken Fen Reserve entrance is no so muddy I had to dab my feet down as I cycled along it. It is awful, I am surprised that the National Trust have allowed it to deteriorate so much. I appreciate that they probably focus on the bit of Wicken Fen that you pay to go in - but a lot of people go along here and I would imagine that some of them are National Trust Members - I am. I believe that you can't take dogs into the paying bit. 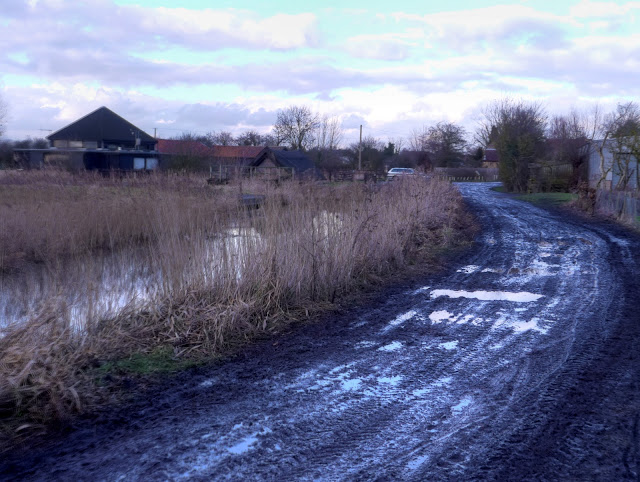 A view of Baker's Fen taken from alongside Monk's Lode with sun beams lighting up the water. 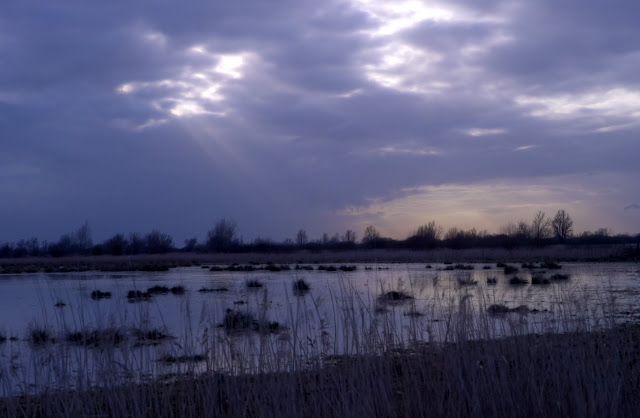 A new sign alongside the Sustrans 51 shared path on the Burwell side of Wicken Fen. The sign explains the NT strategy with the use of the Highland Cattle and Konik ponies as a way of keeping the "biomass" down and encouraging diversity. The grazing is low density with one animal per 2 hectares/5 acres. 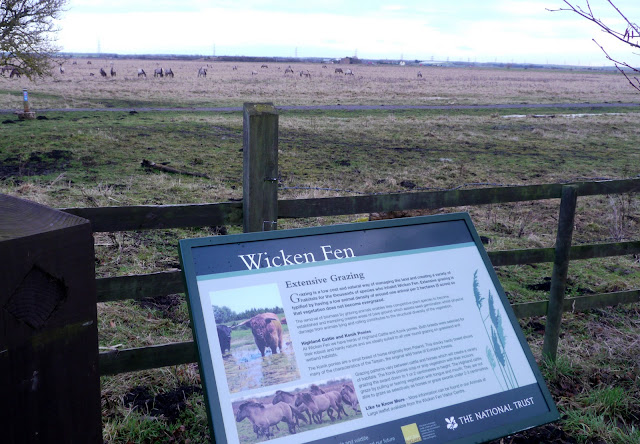 On leaving Wicken Fen I noticed these trees being beamed up (by Scotty?). 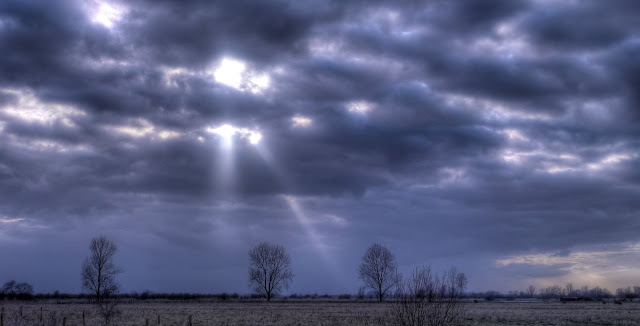 My bike has been muddier than this - but considering I was cycling pretty much on roads and made up tracks - not pure mud, it got pretty dirty. 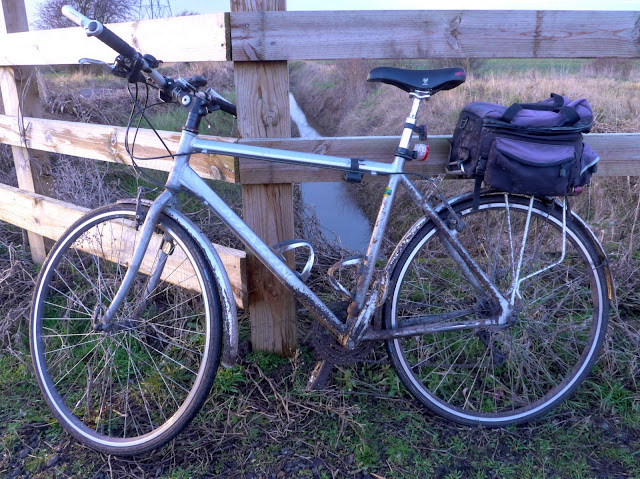 One last comment the National Trust have a vision for the area and is long-term use - this has created some division, so much so that there have been for and against petitions on the Number 10 website. At the time of writing the YES camp has 852 votes and the NO camp has 45 votes.