A cyclist only gets caught out in the rain occasionally–why today?

Wednesday, 30th March: It seems that a new regime is coming into force in terms of encouraging Motorists not to put their lives and the lives of others at risk. I noted that Oxfordshire’s speed cameras were to be turned back on and the funding would be generated from Speed Awareness courses. An agreement has been reached amongst 37 of the 43 Police Forces (In England and Wales) as to what speeds will allow drivers the option of taking a Speed Awareness Course rather than be fined and have points on their licence. The guidelines are in the Daily Mail under the headline: “Drivers who exceed speed limit by more than 10moh will escape points and fines”. Part of the money raised from the courses will also fund the Speed cameras.

Personally I think that this seems like a reasonable solution – I am in favour of speed cameras and I am in favour of training being “made available” to drivers who push the limits a bit.  According to the Thames Valley Police fatal accidents rose by 50% in the 6 months in their area after the cameras were turned off.  Over the last few years having helped teach my kids to drive I am convinced that more motorists push the safety margins now than they used to, well at least here in Cambridge.

Why does this matter, well recently it was reported in the Cambridge News that “Mums say children facing ‘dangerous’ walk to school”. Apparently there is a school bus that runs past Toft to Comberton which used to pick up Primary School children for free, but those living in Toft will not be allowed to catch it for free. Some parents are citing the danger, although  I would imagine it also upsets the “working” day to have to deliver children to school.  The problem is that we have grown more conscious of dangers to children both from traffic and strangers and now consider a two mile walk or cycle as too much.  However do we really want yet more children being driven to school adding to the traffic and the traffic danger.  The end of the piece does suggest that parents could pay for places on the bus if there are spare seats which seems to be a sensible solution. (As long as the paying children don’t subsidise the “free” children.)

And in what seems a really bizarre potential law in Florida Senator Jim Norman is trying to make it a first-degree felony to photograph a farm without first obtaining written permission from the farmer. It seems to be a pointless waste of time and money as far as I can tell.

When you work from home you can be pretty flexible about when you work and when you cycle don’t. Although it is true that having a reasonable regular commute to work, by bike of course, helps to keep those pedals pushed.on a regular basis.  The challenge is that if the distance is too far then there are times when you get put off and somehow stop for a bit. Re-starting can be even harder.  If the distance is too short then you don’t really end up doing much good, in terms of exercise. Mind you even a short cycle is much better than driving a car.

One of the factors than can discourage a cyclist is getting caught in the rain. The problem is if you wear reasonable work clothes and then have to put raingear on the top you can get incredibly hot and sweaty. If you don’t wear rain gear than you end up sitting in slowly drying clothes. You can always wear Lycra, but for a short commute to work that can be a bit of a faff. In reality if you have a bit of leeway in terms of when you actually need to cycle you really don’t get caught out in the rain too often.  I find a useful compromise in the summer is to wear a normal pair of shorts for cycling and carry a thin waterproof top (mine packs up into a very small space). That way you get the benefit of air-cooling. I also used to keep some spare clothes in the office.

I had meetings in Cambridge and although the weather forecast did predict some rain I took the glass-probably going to be dry view and figured I could certainly get to my meetings before the skies opened and then for my trip home – well if I get wet I can always change. I was right I managed to get to where I needed to be without getting wet, afterwards as I found myself walking down Trumpington Street – well I had obviously missed some rain whilst inside.

Mind you we do need some rain – Spring is springing and all that new growth needs a bit of water to make it possible.  I have never really though about it much but there are some splendid and tall trees along Trumpington Street. 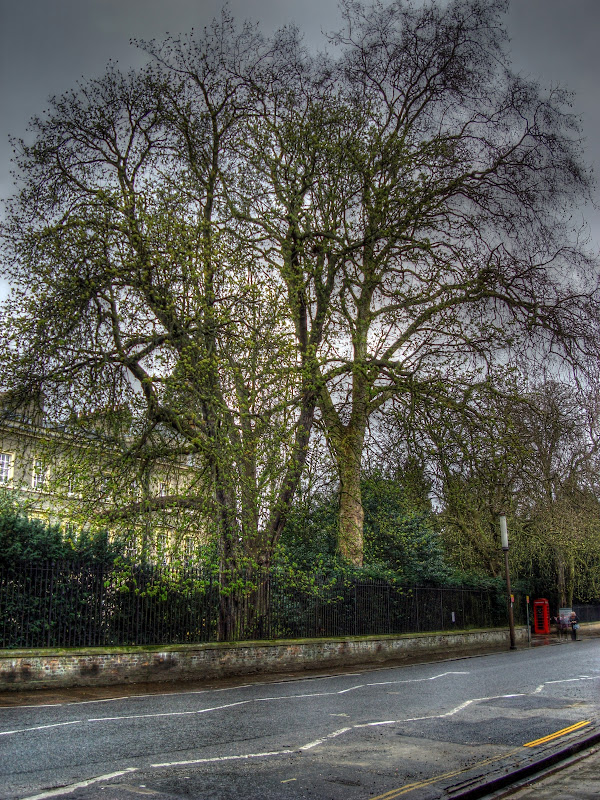 The last picture did not really give a sense of the how much rain – this was all dry on my way in. Being Cambridge and near some University buildings inevitably you see bicycles parked up – in this case on both sides of the street. 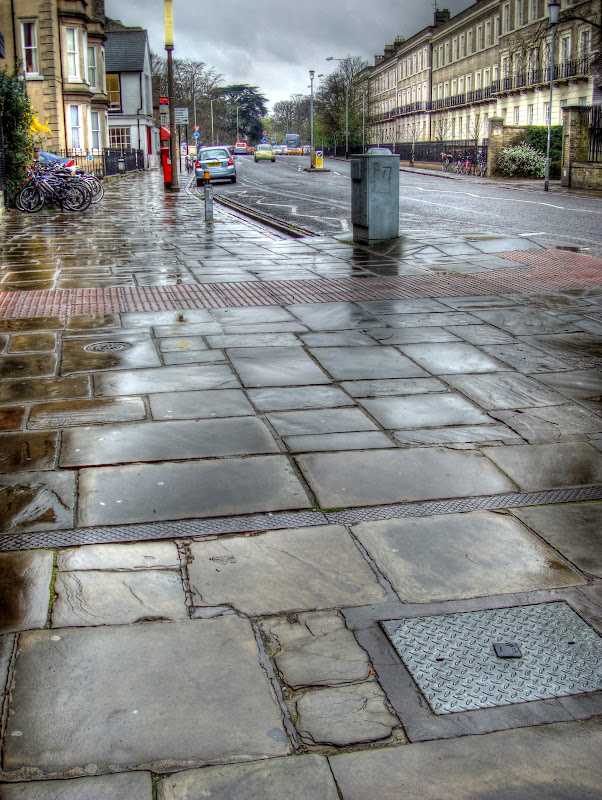 There was also some signs of leaf on the trees outside the Judge Business School building. 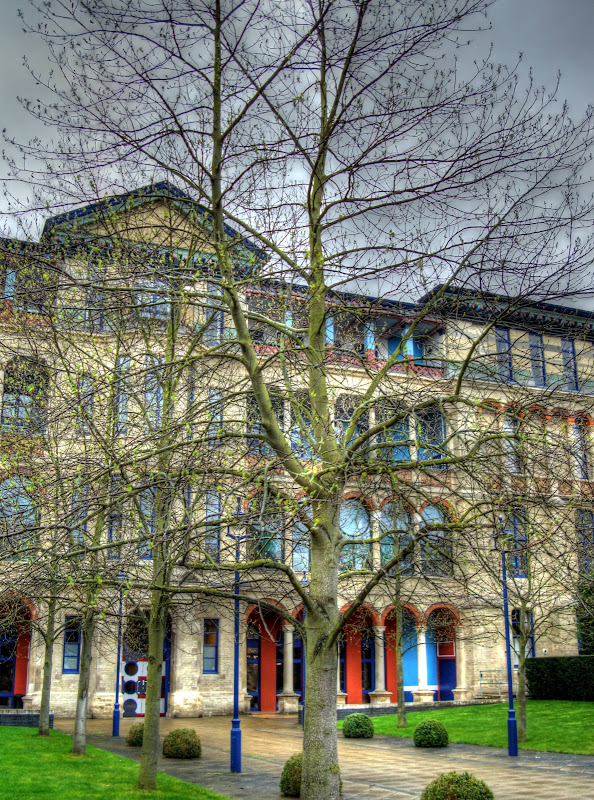 Water is less of a problem for the trees alongside the River Cam (on Riverside) but the left bank is now almost completely green. 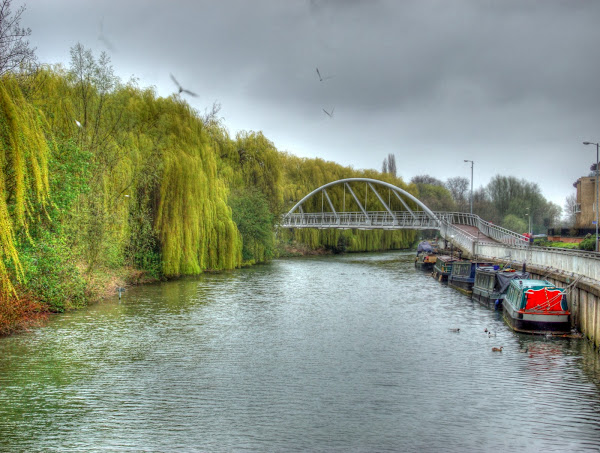 The Chimney Stack alongside the Cambridge Museum of Technology. 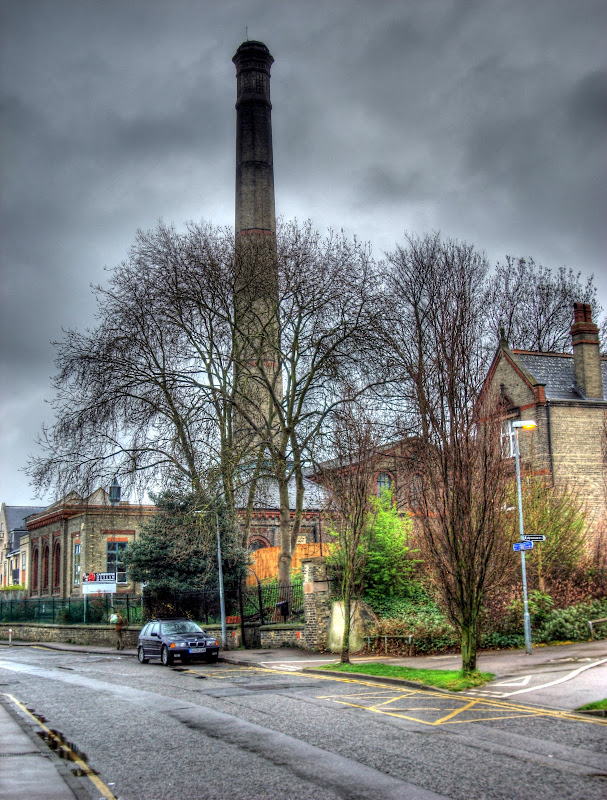 And yes I did get wet on my way home.  At first then were only a few drops of rain so I carried on and didn’t bother putting my rain jacket on.  Then after the rain had increased in tempo there was no point in putting a jacket over slightly wet clothes. But, there was a bit of a breeze so I did not actually get so wet that I had to change, I just swapped jumpers when I got home.