Tuesday, 15th March: I feel the need to start increasing the distance I am cycling at the moment.  Partly because I know I have been fitter and partly because Spring will soon be springing and I want to be able to do a few two-three day cycle tours on some of the more picturesque Sustrans routes and I want to be able to enjoy them without too many aches and pains and other niggles (think chafing!).  The best way for me prepare is to get some distance in.  It might just be the finer weather but already I am finding it easier to keep pushing those pedals.

The trouble is that is that it is not always easy to fit in rides, however the lighter evenings are helping and soon the clocks will change which will make it even easier. The days are getting longer by just over four minutes a day and the 18th of March is when the hours of daylight hit twelve!  So today’s ride was a bit later in the day than I would like, mind you it was also greyer than I wanted as well.

The route ended up being my no-brain “default” ride – out along Lodes Way although I did pop out along Low Fen Drove Way first. It was when I stopped to take a picture of the misty greyness just after passing over the bridge over the A14 that I realised it looked different.  Already the mess left by the fly-tippers had been removed.  Whilst I appreciate that there are a variety of different political bodies that provide our local services including City, East, South and County Councils,  I am not sure who has jurisdiction here – but well done to whoever it is.

Just as I am prepared to criticise the County Council for the mess that seems to have been made of the Cambridge misGuided Busway I ought to offer praise when things like this get sorted so efficiently.  The shame is that it should be necessary. 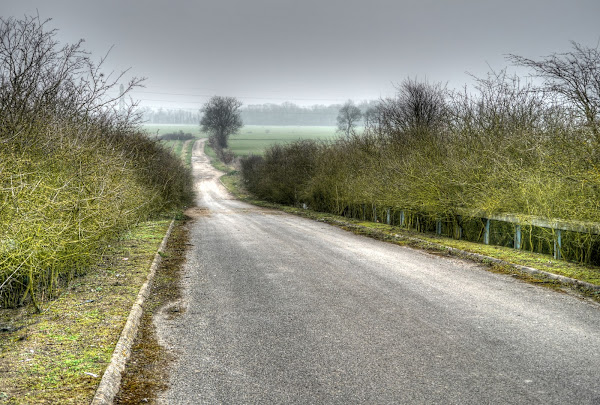 A bit further around the byway and look, no rubbish, the pile of wood chippings there the last time has also been cleared up. Talking about fly-tippers, by the time I finally got to finish this Post I saw this article about “Britain’s worst fly-tipper” – he got jailed for three years. 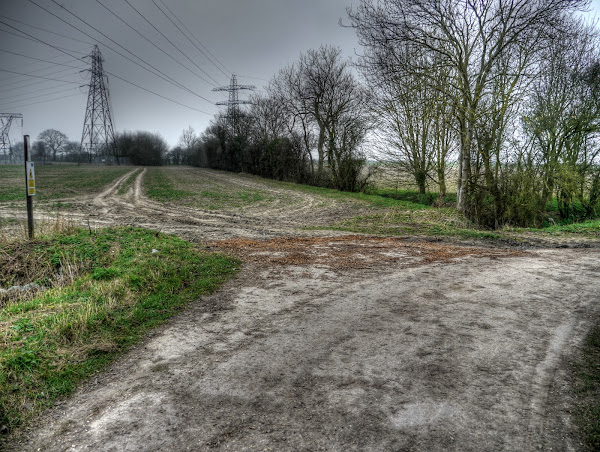 Nothing of note until I joined the Harcamlow Way between Horningsea and Quy Fen.  This has to be one of the best bridleways I have cycled along, at least the first bit of it.  I guess that this path has to support quite a lot of agricultural traffic – there are quite a few fields along its route. It has also had some repair work done since the last time I cycled along it.  All the dimples (they were too small to call potholes) have been filled.   The gravel was fine with my 25mm tyres, I can imagine it might be a little more troublesome for the super skinny tyred-brigade. Although thinking about it 25mm tyres are not that much wider than 20mm which are at the thin end.Mind you I am not sure quite how thin tyres can get. I have seen 700C x 18mm tyres advertised, which is pretty thin.  I suppose it was something I used to think more about in my early teens when I got my first racing bike – a five gear (Campag and to think I now use Shimano) Falcon in green – it was marvellous.

One of the great things about it was that the gears were less prone to slipping compared with the three-speed Sturmey Archer geared-bike I had before the Falcon. I was once cycling home and the gears slipped and I ended up scraping one side of my face up the tarmac. My school friends thought that I had been beaten up – I can’t imagine where they got that idea from. 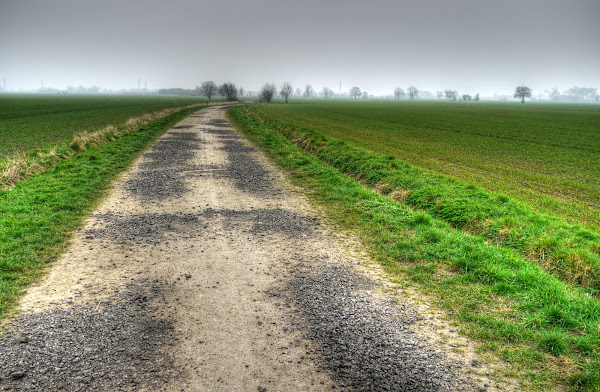 The view from the path (to paraphrase David Hembrow’s excellent cycling blog – to make non Netherland dwellers jealous), the misty outline of trees and picturesque (not) electricity pylons.

Instead of my usual jaunt along the byways and bridleways I did a bit of exploring of Quy Fen. There is a map of Stow Cum Quy in 1737 on the British History website entry for Quy. According to the Horningsea website page for the Fen there are a number of water-filled pits which “were excavated in the 19th century for coprolite (dinosaur dung)”. There has been some work on the bank of this particular pit since the last time I visited. Apparently the digging was to provide local work, but the business failed after four years. According to this link at least two people have died swimming in this pit. 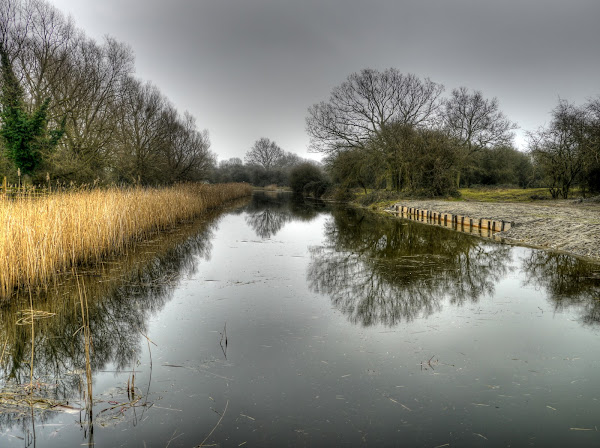 Here is a view of the reeds along the left-hand side. Cambridgeshire County Council publish a leaflet (pdf) of walks in the area with a little bit of history and wildlife thrown in.  I did not know that Horningsea is so named for the “Island of the descendants, or followers of Horn. 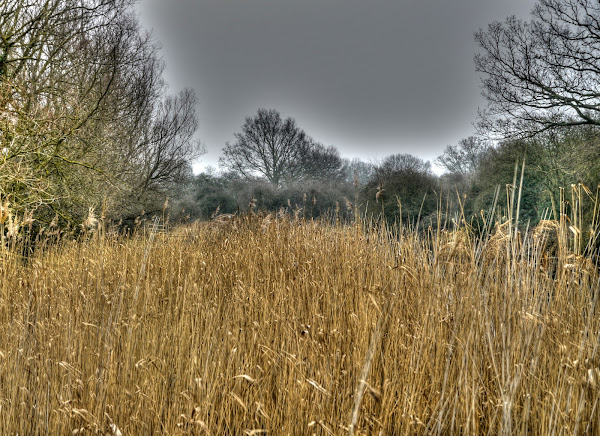 On the other side of the pits towards Lode in the middle of a field is this monument to William Ison, the villagers of Lode, Horningsea and Quy  have joint rights over the Fen which included the right to cut grass. That is what this chap was doing when he was struck by lightning. 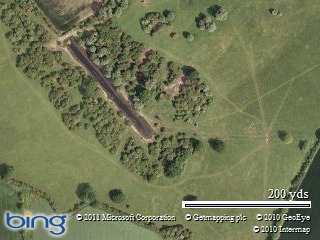 The stone is surrounded by a small wooden fence to protect it from grazing cows. As I didn’t want to kneel on the grass I stood over it to avoid getting a picture of the fence. 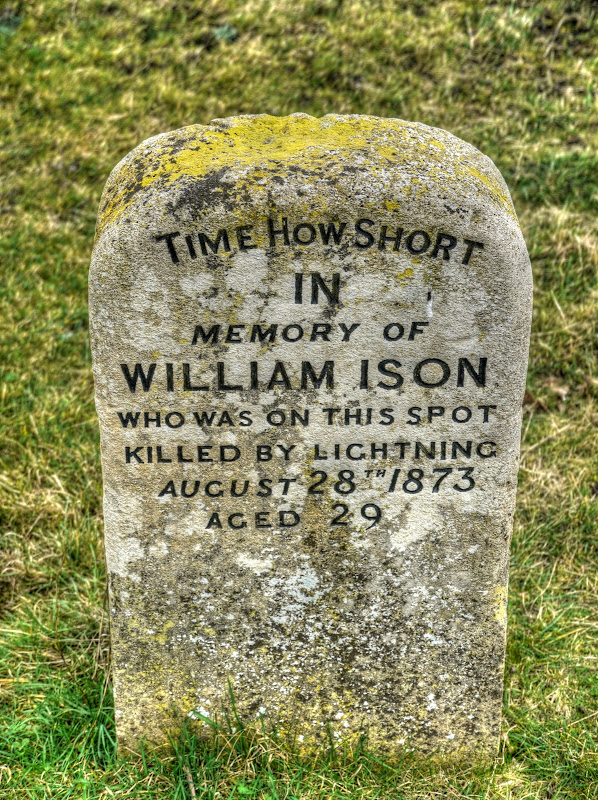 A bit further along  (The Drove Way) - there were some spots of colour amongst the grey.  Those hungry birds must be a nuisance for the farmers and at this time of year you see quite a few scarecrows in the fields and bangs from bird scarers.  There are two scarecrows in this field and a bird scarer – it looks like a gas powered “banger”. 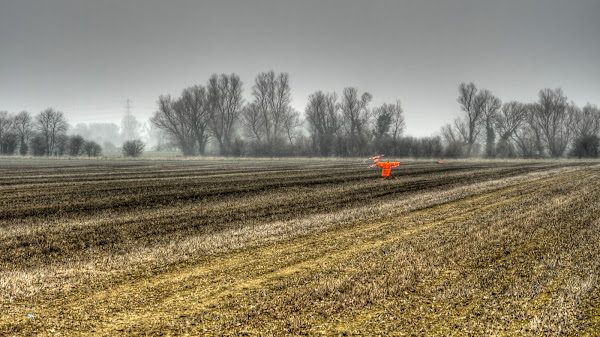 This track has the name Dam Drove on the OS map and runs between two hedgerows.  I’ve never really thought about it before – but it is strange to see a pipe rise up from the ground and then sink in on the other side of the ditch. Sometimes there are pipes laid alongside the fields to facilitate irrigation.  This one seems to run in parallel with the disused railway line,which is where I was standing when I took the picture so could be water to supply the engines when they were steam driven. 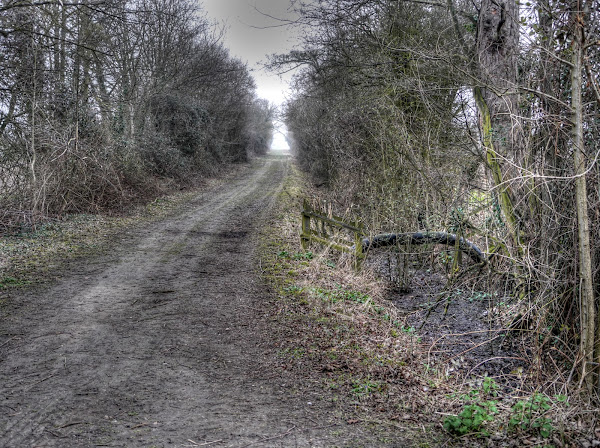 I took this picture because I noticed that there were road signs warning about the bumpy road from Lode up to the White Fen turn off and beyond. It provides a splash of blue and red. I actually took it because I couldn’t recall those Bumpy road signs being there the last time I cycled this way – but that might just be my inattentiveness. 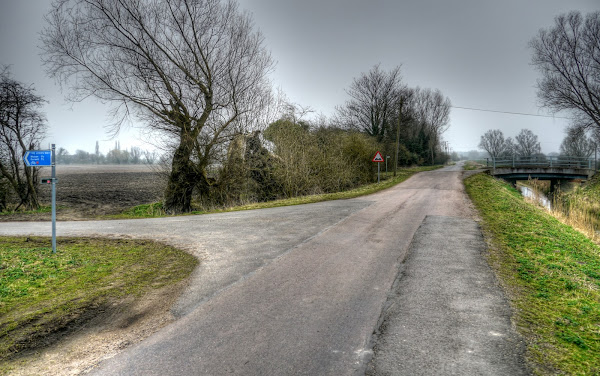 The fields around here were used to grow daffodils in the past, although when I say past I mean around 5 years ago, not 50 years ago.  You still see signs of that with daffodils popping up in the verges alongside the fields. 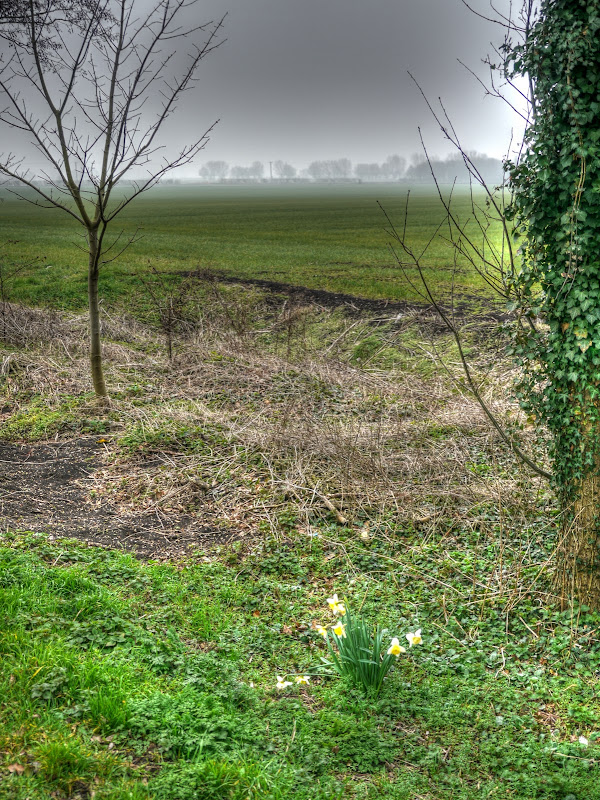 This field is in the middle of Upware and the hedge has recently been cleared and replaced with wooden fencing. As you can see the hedgerow was made up of fir trees so was not too great a loss.  The field itself has lain fallow for a while, but was perhaps the most recent daffodil field.  In fact since the daffodils I am not sure it has been used for anything else.  As a result there is quite a patch of “wild” daffodils here, the largest around. 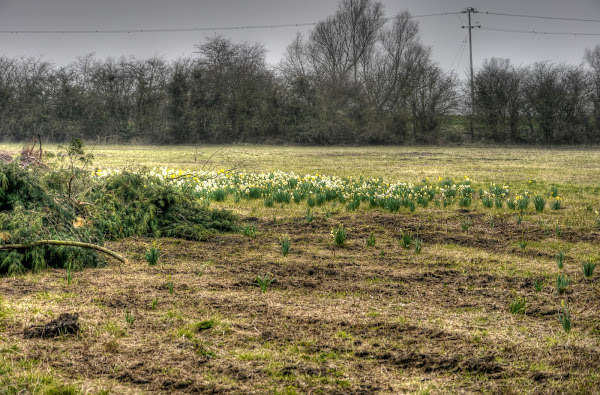 I did my usual route through Wicken Fen, down to Burwell and up Newnham Drove to the Lodes Way.  Newnham Drove was its usual unpleasant ride, I find it is best to keep up a reasonable speed and “float” over the bumps.  I cycled along Lodes Way back towards Wicken Fen for a little bit – it just seemed nice and peaceful.  The track seems to be staying in shape.  This path does not have fences alongside, it has Ha-Has, although the angle of the bank looks a little shallow. They are filling with water though. 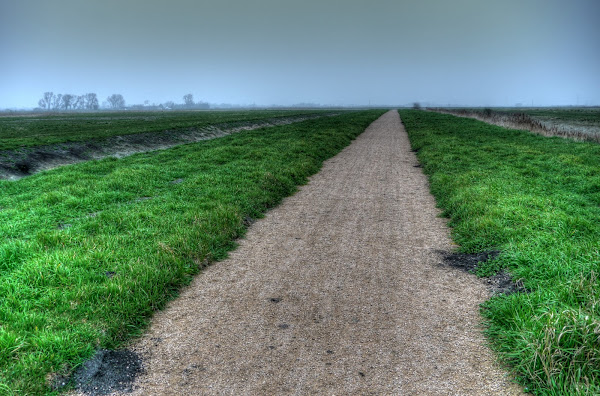 Newnham Drove carries on past Lodes Way to Burwell Fen Farm – a few dilapidated cow-sheds! I often see people walking up the track, there are footpaths to the left and right. 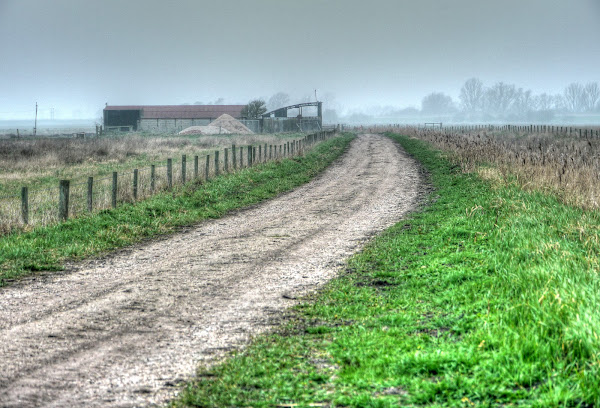 I am looking forward to Spring – it is about time we had some sun around there parts.  Having said that the Fens do have a peaceful air about them when it is a little misty. It is a good job they don’t charge to cycle along here – it would have cost me a fortune.

Mind you as I sit here finally about to Post this Tuesday ride 4 days later on Saturday, despite the frost we had this morning the sun is shining brightly.  Let’s hope I get the chores done and get a bit of cycling in later today.