Thursday, 10th March: After last nights late night experiment and posting using Live writer to try and duplicate the look and feel of Zoundry I have had to give up and get on with other things.  There are certainly features I like about Live Writer, but there are also things that I am still trying to get to grips with. The main issue is the best way to add pictures.

I have not been out on my bike for a couple of days, but today had the welcome excuse of meetings in Cambridge and I managed to clock up around 24Km (15 miles).  The challenge was that it was windy and I foolishly took the wrong loop. I extended my journey on the way in by heading East with the wind behind me and then foolishly left to little time to get to my meeting at 1.30pm without way more exertion than is good when wearing semi-smart clothing.

I must have looked pretty hot and bothered as I was immediately offered a bottle of water when I got there. Unfortunately I probably reinforced the view that you have to be nuts to cycle to meetings. Having said that when I left I stopped to discuss the meeting with a fellow cyclist also leaving who had not attended it but was involved in a peripheral way.

I was also slightly delayed as my plan was to take my Marin for a run as it had come back having been fettled by Ben Hayward Cycles. The front wheel felt a little soft though – that was the wheel where I had replaced the inner tube and tyre I am pretty sure I did not catch the inner tube, which was new so it might be the valve. I will pump up the tyre and see how it goes. This time around I switched to my Longstaff, but had to switch cycle locks which meant going back into the house to get a different set of keys which meant unlocking the house. All these things don’t take long but together they add a few more minutes here and there and reduce the time left for taking pictures en-route.

I ended up taking all my small handful of pictures around Midsummer Common. The path I was on passed this tree springing back to life on North Terrace – which is good to see we all need a bit of Spring in our lives. I was using my small pocket camera – Sony DSC W200 and although it will take bracketed pictures – it will only take three fairly close exposures in a sequence and the sun and sky were too bright and bleached out.  Just to the bottom corner you can see cycle tracks in the mud – more on that later. 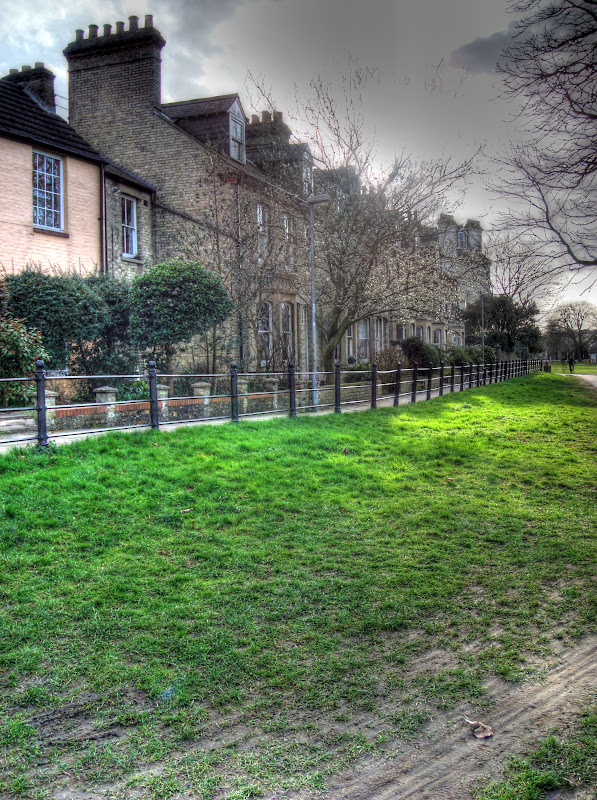 This is the same picture in close-up. I try to check my Posts when they get published and somehow this picture had been deleted – it shows I have some way to go in getting to grips with Live Writer. 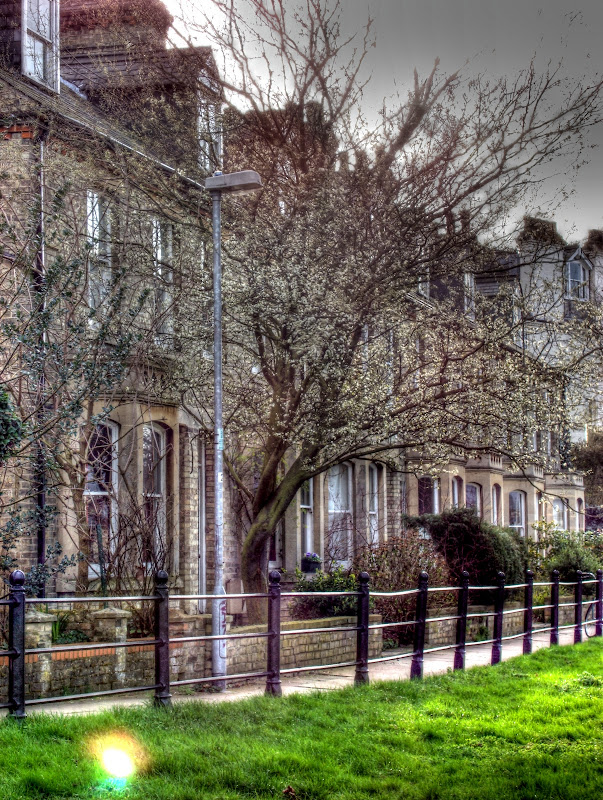 This is the path I was on, it is well used by cyclists, pedestrians, dog walkers and pram pushers alike. The trouble is that it isn’t really wide enough for the traffic.  Car drivers hate it when they see cyclists riding two abreast, they feel it is an affront to the natural order of things. Why should a person in a car have to wait for a lowly cyclist blocking their path.  Well it is not uncommon for pedestrians to walk two abreast and why not. The reason cyclists do it is because it is a sociable thing to do – the same reason people out walking do it. What a car driver doesn’t realise is that part of the fun of cycling is the sociable chatting side of the activity. Perhaps we should ban car drivers from talking to their passengers and see how they like it.

I almost forgot to mention – some young idiots in a car passing me thought it would be fun to shout at me as they went passed. Sadly this happens all too often. They were so excited with their little prank that I could barely make out the words they were so incoherent – or perhaps drunk!  Here is the Cottenham Cyclist, who also mentions in his Blog how abuse is often shouted at cyclists for daring to ride on the road.

The trouble is this path is not really wide enough for a cyclist to pass two pedestrians without resorting to the grass. The path is only just wide enough for oncoming cyclists to pass.  I have had my handlebars clipped by an oncoming cyclist at night before now on this path. That is why the grass looks a bit muddy on each side of the path.  Despite much of the good work by the Council in encouraging cycling this sort of provision is but pretty poor for cyclists and pedestrians alike really.  I have never bothered to count the number of cyclists using this path at any given time – but there were quite a few that went past as I was taking the previous tree pictures. 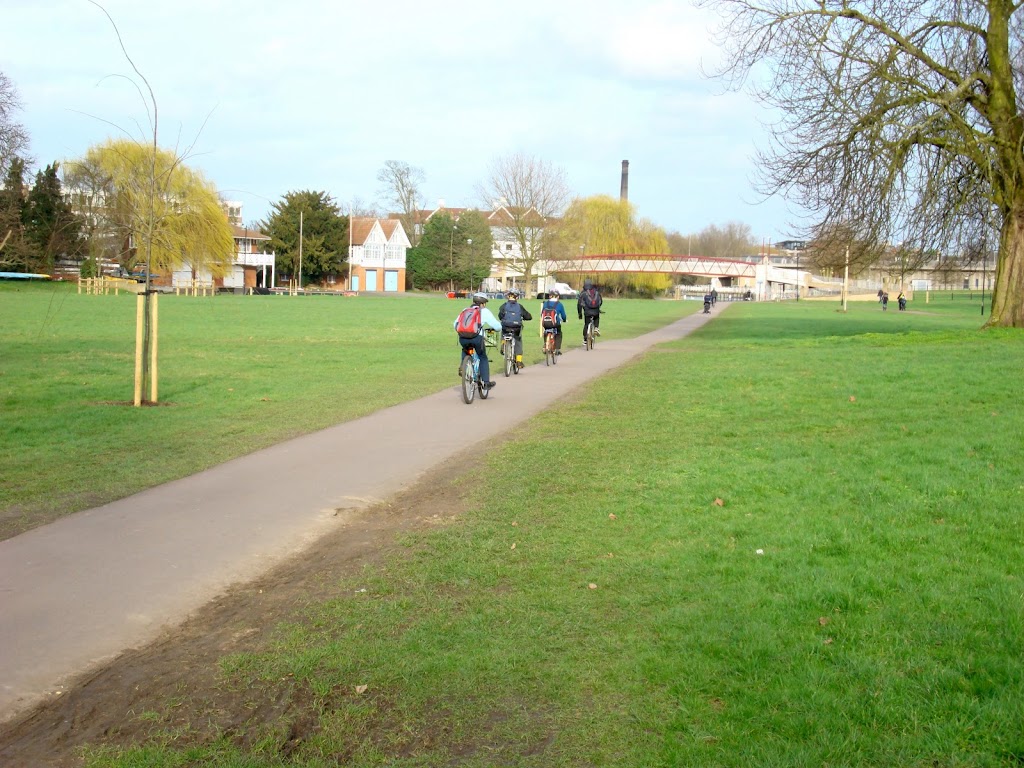 What also caught my eye the other side of Elizabeth Way bridge was a sign explaining why there were bits being dug up.  The plan is to reduce the number of vehicles in the Riverside area by stopping it from being a through way for  for said motor vehicles.   There will also be a “separate” cycle path along Riverside. Although it will only be separated by being a different colour.  Heaven forbid that cyclists should have a dedicated cycle way.

Some of the funding is so-called S106 money.  When certain large planning applications are made the developers have to pay some money into a pot for the council to use as a slush fund for “social benefit. In this case the money came fro the Tesco Supermarket development on Newmarket Road. I wonder if the people on Newmarket Road will see any benefit from S106 money they are also the ones who suffer the additional traffic past their houses. 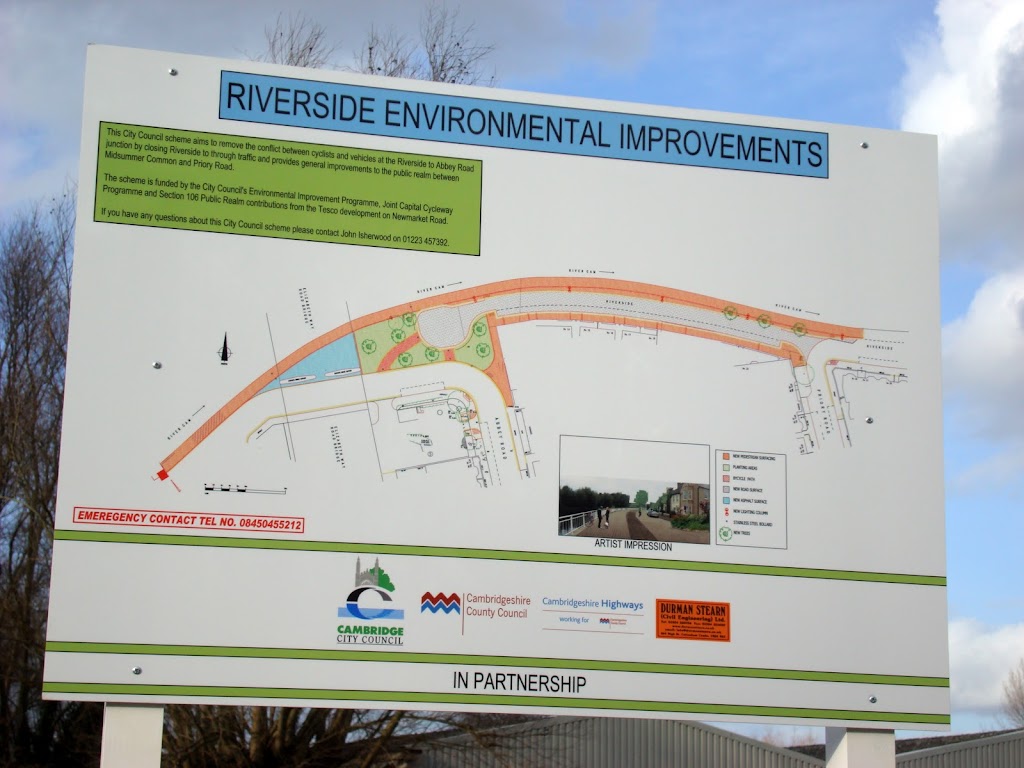 Now Spring is upon us there is also more daylight for the rowers to go out and practice. A group here looks as if they are about to go out – if not then why bother putting the boat on the water.  The river is quite bendy at this point as the large chimney belongs to the Cambridge Museum of Technology. 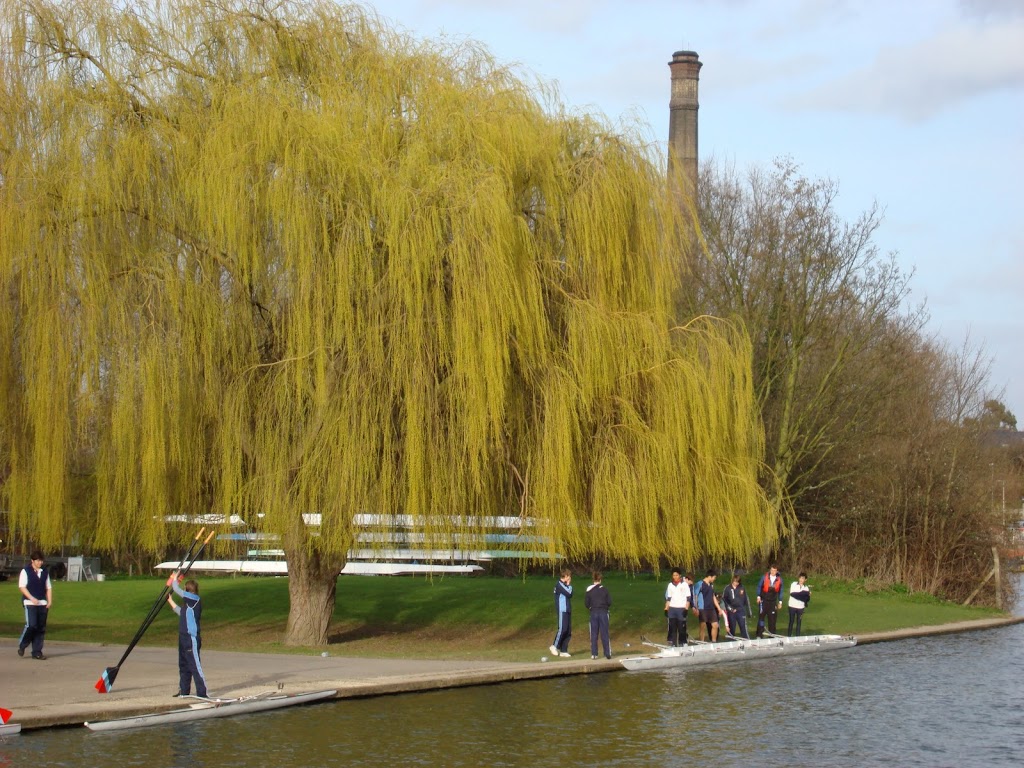 I forgot to mention I managed to catch the wind to push me back some of the way. The odd thing about wind and cycling is that when it is against you it makes cycling really hard work and yet when it is behind you blowing you along you barely notice it. You just feel fitter.