Sunday, 2nd December 2012:  Well for what seems like the first time in a while I am writing a post in the same month as the ride was ridden.  In real time it is Christmas Eve – the lull before the storm so to speak. Fortunately I had a personal shopper to help me this year (my daughter) and so presents were bought and wrapped with minimal hassle. So now we are in that quiet lull and I have time to write another post.

I have been cycling, yesterday I bumped into MikeC, who had some useful ideas on sorting out my computer. Indeed my brother-in-law also provided some useful pointers as well. \i usually open up the computer at this time of year and vacuum the dust out. You’d be surprised just how dusty they can get – but as the computer seems stable I am reluctant to meddle.

I am not sure why, since it was a while ago, but I must have set off later in the afternoon – well judging from the height of the sun in the pictures. Before leaving I did rather like the shadow cast by the sun coming through a window. I added a bit of blue as well. 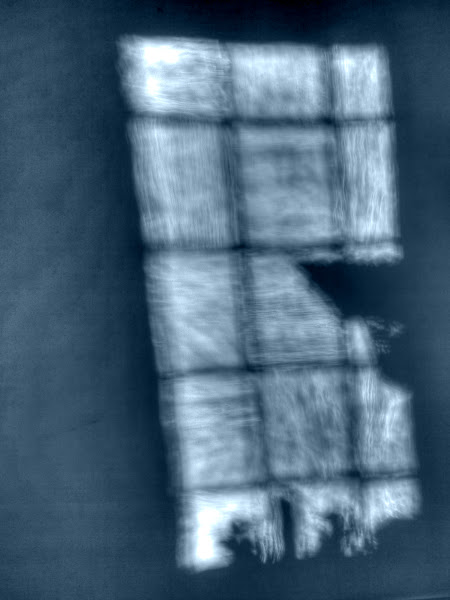 As for the ride it was a Lodes Way ride – this time avoiding the old railway line behind Anglesey Abbey. Although he sun was low the sky was blue. This is the view from Fen Road, on the route from Lode to White Fen. 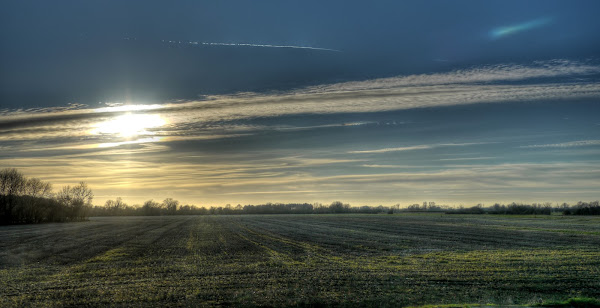 the same, more or less, picture but without the sun in it to “fool£ the camera shows that how blue the skies were.  It was pretty cold though. 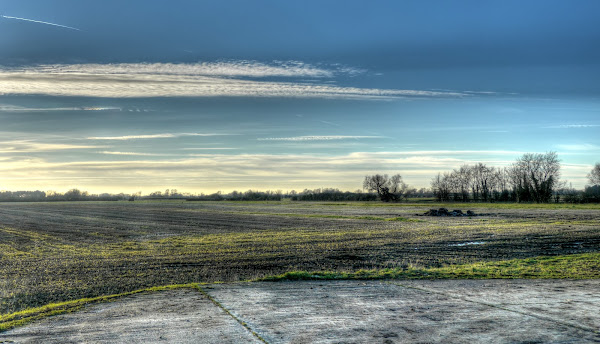 The evening light can generate some pastel shades – these are pylons on there way from Burwell to Cambridge. 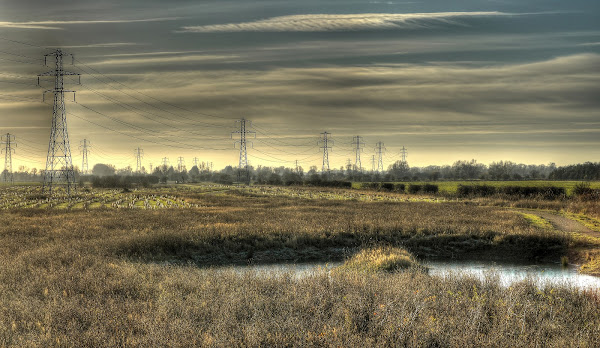 The late afternoon must also be the time for transatlantic flights, there are often quite a few contrails high up in the sky heading north.

Contrails in the sky – Lodes Way 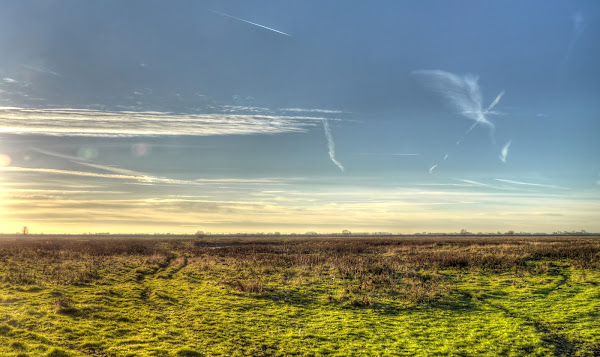 You can just about see some frost in the near ground in this picture – which is where Newnham Drove crosses Lodes way. 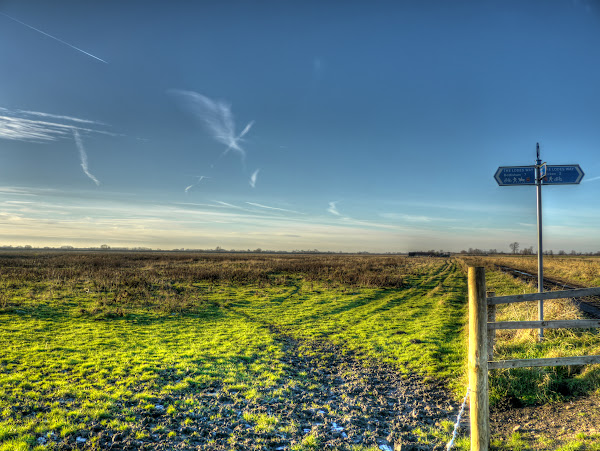 At this time of year, with the amount or rain we have had the roads can get muddy pretty quickly. This bit of Lodes Way is just after the Burwell Lode foot bridge, near Priory Farm. The sun seems to have brought out quite a few walkers – although they started off as either car drivers or car passengers. You can see how low the sun is from my long shadow to the right of the picture. 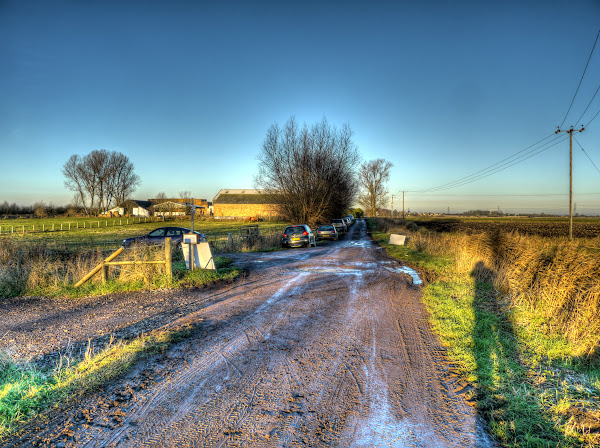 On the way back the sun was getting lowers in the sky – but remarkably strong despite it being the Winter months. 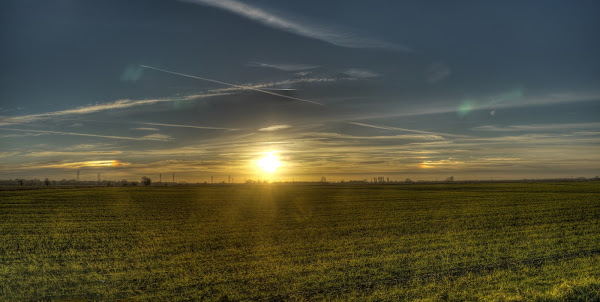 A little further along the Lodes Way (on the return leg) there was a Sun dog (well two actually). 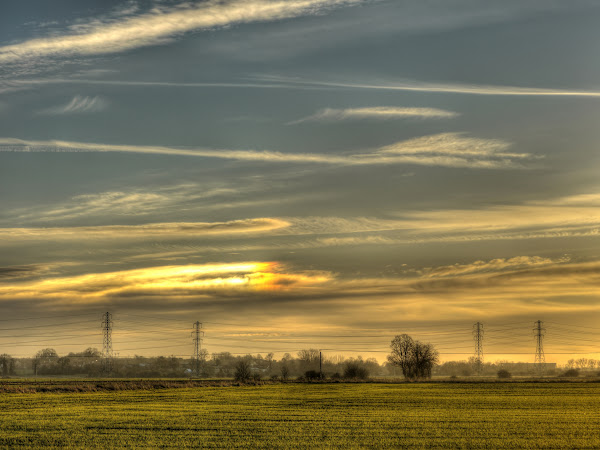 You would expect them to come in twos – I did actually take three pictures and was planning to combine them as one panorama. The trouble was the exposures were so different I couldn’t get the pictures to stich up convincingly. The Cambridge news reported one over at Cambourne later in the month. 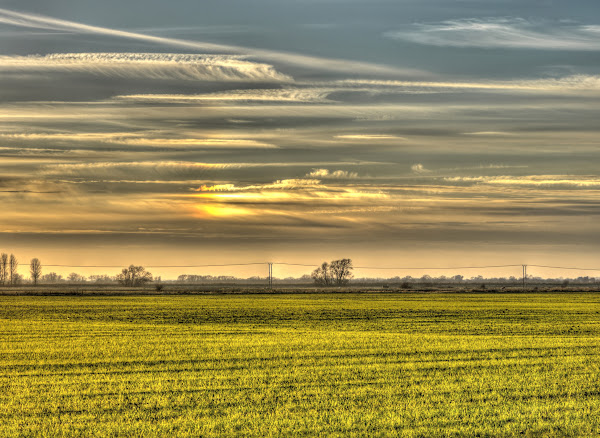 As I headed back, a good bet for a sunset picture is of the Reach Lode bridge. As the sun sets it also gets noticeably colder. You can see in this picture that the frost was still around from the morning.

I tried a few variants of the picture – although at this time of year the sun sets further to the left. 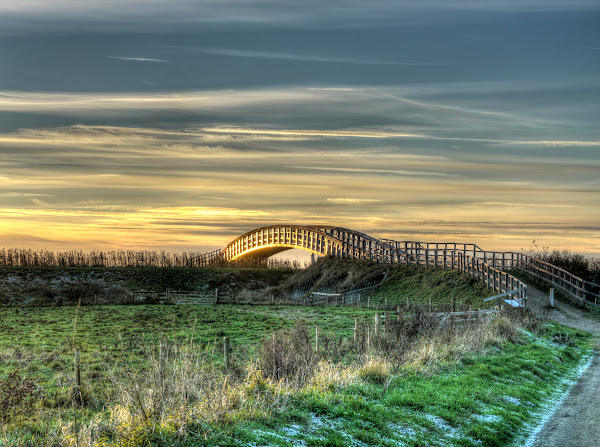 Don’t worry this is the last attempt – lots of frost on show here. 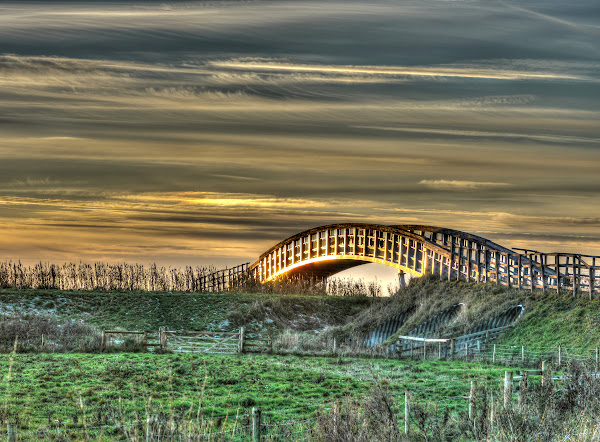 Oops I lied – this is another picture of Reach lode – showing the sun dog casting the false sun. 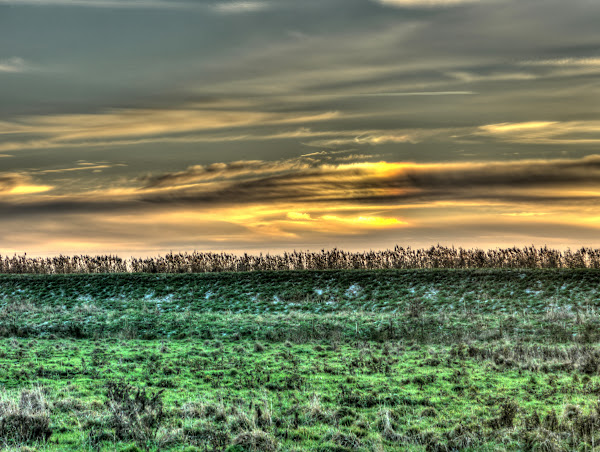 Every now and then other examples of sun light effects get into the news – here is a Brocken Spectre.

Here are a couple of Brocken Spectres I  have taken – the first is seen out of a plane window.

Brocken Spectre – from a plane window 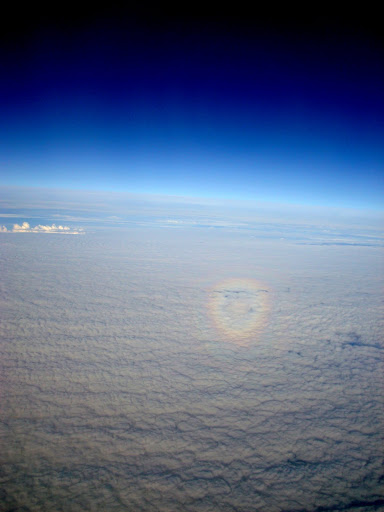 This one was taken after my son and I had climbed up Huayna Picchu – next to Machu Picchu. 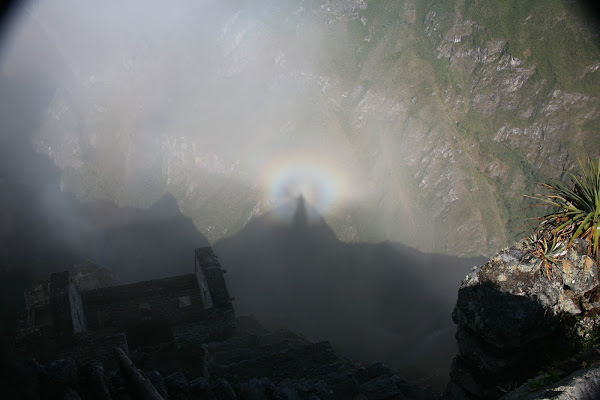 Oops – I almost forgot – a bunch of pictures – This first set combines recent pictures of derelict railway lines with older black and white pictures when they were operational. This set is of the Soviet aeroplane graveyard with a picture of Concordski.  whilst on the subject of aeroplanes – Britain’s largest four-jet model plane – I wonder if Father Christmas will be bringing me one of those.

A “Meccano” bridge – really a footbridge. A seasonal report on the perils of potholes – although the AA is taking a different tack and point out the pothole peril to pedestrians – so perhaps the shoe tax will help pay for it.