Friday, 30th November 2012: So where to start – although I haven't been blogging for a while stuff has been happening and I have been cycling. Whereas I would normally keep a bunch of links going that interest me all the recent Sys admin has meant that I have not bothered. However I now find myself wanting to write about it.

So some of the stuff that has been happening is loads of rain and yet more flooding, although not as bad as some places.The Travelling the CGB reports that once again the cycle track is flooded. Also more worryingly a man has been seriously injured on the busway near Histon.

It seems that Policing has become more political with the Police launching major operation to tackle anti-social cycling in Cambridge. It makes me wonder why, are there loads of serious injuries or accidents caused – or is it because a small group of people have turned up at one of the meetings which decides this sort of thing to promote their own agenda? The trouble is that whilst some might argue this is democracy in action it can also turn into a small number of busy-bodies, who have time on their hands, pursuing their pet hates.

Humans have developed fairly extensive abilities to see patterns in nature and life, for the most part it works really well. However that same ability can also lead to us seeing false patterns.  Recently there has been a lot of interest in evidence-based policies for deciding what decisions to make when governing the country. However it isn’t always that easy. Look at the disagreements regarding whether cyclists should wear helmets or not. There is quite a lot of evidence concerning the rights or wrong yet many choose to ignore it.

I reckon  that by forcing cyclists to wear helmets it shifts the blame from motorists to cyclists for all aspects of the cyclists safety. Even worse it almost becomes a token of permission. The “drivers” won’t allow cyclists on the roads unless they wear a protective helmet. It is the first step along the lines of roads are dangerous and accidents happen and we shouldn’t punish motorists too much and roads are really only for motorised vehicles (Lorry driver cleared (of dangerous driving) in cyclist Mary Bowers case and Driver ’killed cyclist by recklessly opening door’ . To date 122 cyclists killed in the UK in 2012 – a five year high.

So back to Cambridge here is a thoughtful post from the Cottenham Cyclist, with Road Safety Statistics for Cambridge (2009-2011). Whilst some might feel that cyclists on pavements and/or without lights is anti-social what is more anti-social (and injurious to life and limb) is the design of roads (particularly junctions) and the behaviour of motorists. The other morning when cycling down to fetch my morning paper I had a white van pass me with about 30cm to spare at around 40mph. Was he trying to frighten me – no I don’t think so, but he did.

So the conundrum is that a lot of dangerous driving is more through incompetence, whilst a cyclist might take to the pavement because it is safer – but it is a deliberate act. So which is worse the deliberate act, which doesn’t really create that much danger to others or the careless act that really does.

Such is the furore concerning “errant cyclists” Plain-clothes officers are being deployed. The result – 54 cyclists were caught in one night. Is it the right outcome though – does it really make our lives safer? Strangely enough, in one of those anecdotal, non-scientific surveys that get carried out on my way through Cambridge the other day I saw no cyclists jumping red lights, I did see three motor vehicles jump red lights though and loads of cars illegally use the bus lanes along Newmarket Road.

Strangely the leader of the County Council (Nick Clarke) has also criticised the Cambridge Cycling Campaign for supporting naughty cyclists, which they don’t and called for “balance”. Balance is not a bad thing – but needs to recognise that cyclists and pedestrians are vulnerable – the current lack of balance has driven many cyclists of the roads.

The Council also seems to have a strange idea of what safety is all about . The cycle lane on Batemen Street is getting a £16,000 facelift to make it smoother and safer. Forgive me if I find the idea that a bit of red paint on a small back street will make all the difference to my cycling safety is a bit offensive. Don’t get me wrong a bit of red paint isn’t bad but we have to do far more than that,

One of the things that I think Councils fail to realise is that the haphazard way in which some pavements are designated as shared-use along with poor signage and many being not fit for purpose is perhaps why some cyclists switch to pavements.  Although I would imagine that many cyclists are perhaps feeling frustrated that they are being urged not to use the Regent’s Canal towpath for “rushing to work”. Cyclists – piggies in the middle.

To be fair I think that the issue is not caused by the Police but by the way they are directed and so I should also congratulate them for catching a Huntingdon Rail Station bike thief – working with CCTV and the public.

I suppose the good news is that some money is going towards more cycling facilities in Cambridge – but whilst £2million is a lot of money, it is peanuts in the general scheme of transport costs and it comes from developers S106 funding. Please don’t spread it so thinly that it creates a bunch of sub-standard facilities. At the same time one car park is getting £1.6m to extend it with 500 extra car spaces (and 80 sheltered cycle spaces). The good news it will reduce pollution in historic Cambridge City – stuff those living near the Park and ride though.

Mind you drivers will probably complain that Pay as you drive is back on the agenda. To me this seems like a fudge to pay for a few more roads without it appearing on the UK balance sheet. Complicated taxes are bad taxes, we already seem to have problems with working out which train company should run various routes. Why are we further complicating the way roads are built and paid for – yet more bureaucracy I reckon. Talking of bureaucracy apparently they got the shape of the numbers wrong on some motorway warning signs – so  speeding motorists weren’t (speeding that is- well not so as the law would stick).

At this point I probably also ought to come clean and admit that I have togged up, well to the point that I have stopped cycling in shorts – or rather I wear some bib tights as well as shorts and I have been wearing my Altura Night Vision Waterproof Gloves.  There are brilliant, mine are fluorescent yellow and have an inner glove as well as an outer glove. They keep my fingers warm and when I want to take pictures I can just slip of the outer glove, fiddle with the camera and take then picture whilst my hand stays warm, because of the inner glove. For the avoidance of doubt I am not getting any kickback or discount for recommending these gloves. The other good thing is that they don’t tend to get as smelly as my usual gloves.

This ride was a bit of a Poets ride – although when I set out I resolved not to cycle on any rough tracks by the time I got to Quy I thought I would give the old railway line behind Anglesey Abbey a go. (Cambridge to Mildenhall) It was a bit of a mistake. Mind you I managed to cycle along it – with a lot of wheel slip and Maisie Marin got very muddy. You can also see that there was still frost on the ground in this picture. 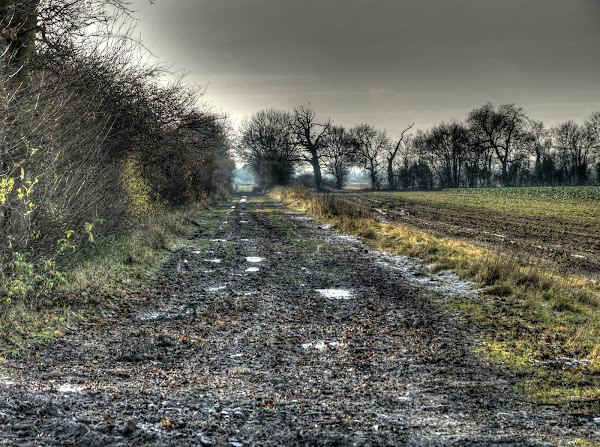 At the end of the old track is the site of the Quy railway station. 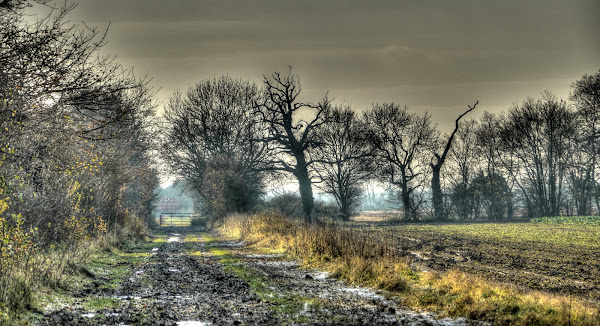 After that muddy trek I reckoned I would stay away from the mud and carried on Lodes Way. It seems that the Scouts were going to be using the wild camping facility for the weekend. This was the rendezvous. 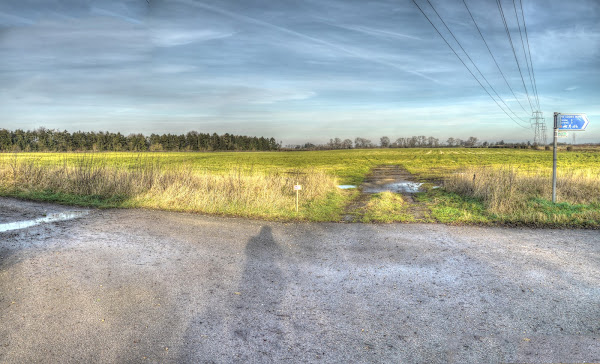 Here is Maisie having a rest near Split Drove on the bridge over Commissioners’ Drain – a tidy drain it was too. 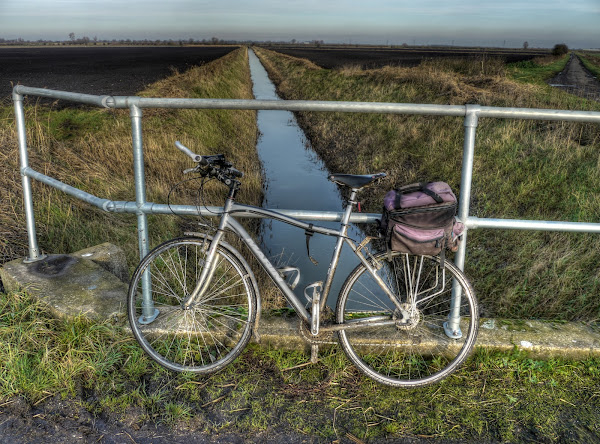 The view back down the drain in the Cambridge direction. 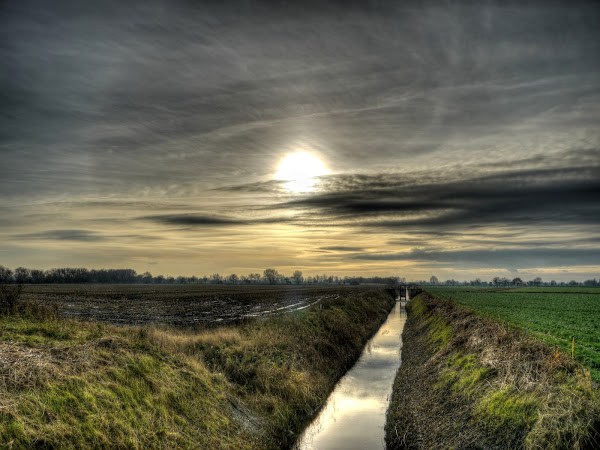 A little further along Lodes Way I wondered whether the horse gates had been half-inched (pinched) from the crossing near Newnham Drove. 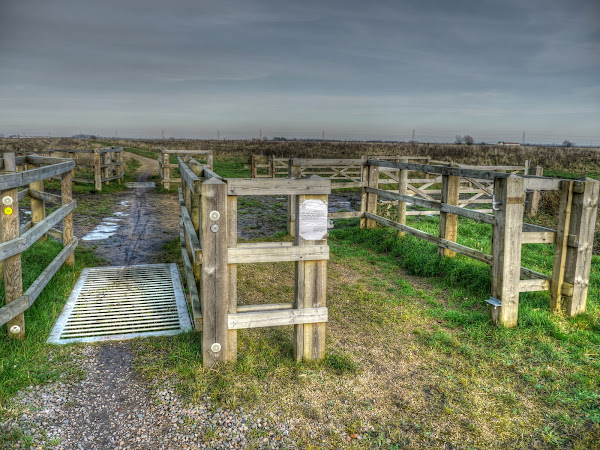 It turns out that the gates were removed to make it easier for horse riders, whilst the area is not used to graze the cows. Here is John’s Blog. 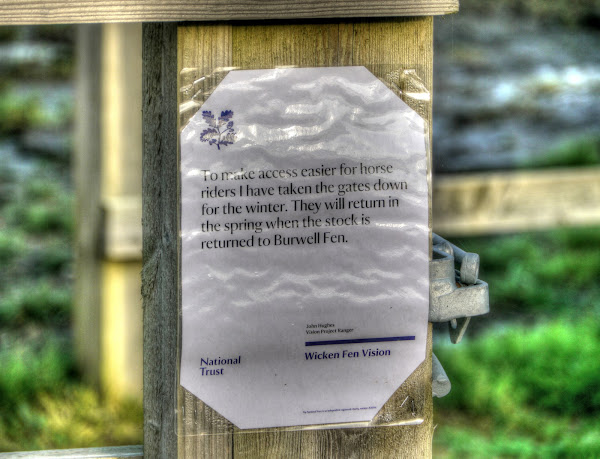 The ground works for the new, but unfunded bridge over Burwell Lode seem to have reached a temporary stop. 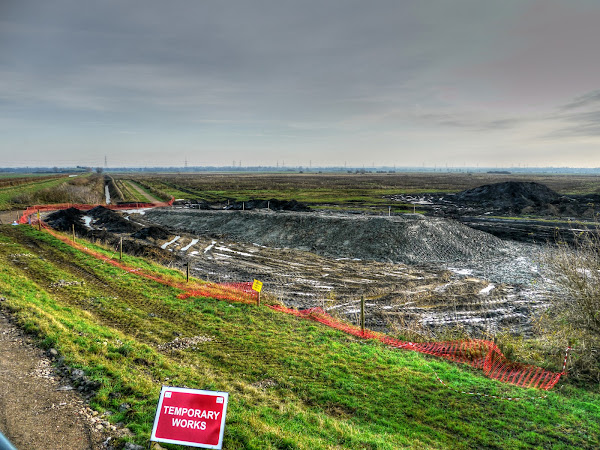 The electric bridge seems to be getting smaller and smaller as it is dismantled, presumably for its refurbishment. 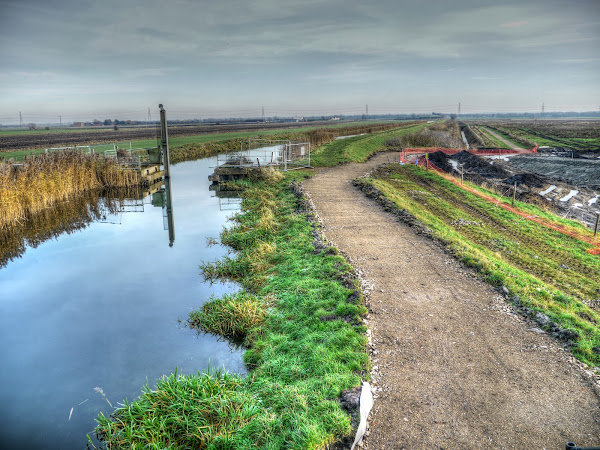 After a loop of Wicken Fen I noticed some cycles locked up to the cattle grid lock in the path between Wicken Fen and Priory Farm. There was a bit of water lying around as well.