The Cambridge Guided Busway–before the floods

Sunday, 18th November 2012: At one point, when they were building the Cambridge Guided Busway (CGB) I used to head out that way quite often to see how it was progressing. However if truth be told I have become a little bored of the route. That is not meant to be a criticism of the cycleway – far from it. However I prefer to change my routes. When I used to “commute” to work I used to take different ways just to ring the changes. I certainly prefer to cycle a “circular” route.

Depending upon the weather there are some rather nice byways and bridleways that can be incorporated in rides out towards St Ives including the Aldreth causeway one of the three main ways of getting to the Isle of Ely. There are others such as Gun’s Lane/Rampton drift and bridleways and RUPPs from Earith to Over. However when the weather has been a bit damp I tend to use the country lanes – which used to form part of NCN51 from Cambridge to St Ives but is now known as Regional Route 24 (RR24) . Although I often divert from the route and cycle over the CGB via Gravel Bridge Road to Over and then re-join it at Swavesey. That way I get  place to take pictures of the CGB whilst looking down onto the track.

What I should also say is that this is a slightly out of date post – we have had lots of rain since and the CGB cycleway has at times become impassable. For a more up to date view of the CGB this website tends to be more current – Travelling the Cambridgeshire guided busway.

There have been 105 gripes reported abut the CGB as well – and nine were unspecified.

All that being said the CGB cycleway is quite pleasant and this time around I did ride along RR24and over the CGB and through Fen Drayton Lakes. The ride started in Cambridge and disappointingly some motorists along Gilbert Road seem to have been taking advantage of the cycling lanes to park.  There seem to be three ways of dealing with this sort of problem – which is one of the many straws that stop the general public from cycling. More policing and tickets, segregated cycle lanes that make it impossible or smart cars that report back to base that the driver has transgressed.

Personally I reckon that the roads have become a more hostile place to be over the last 20 years and I measure that in terms of the lack of courtesy rather than accidents. Lack of courtesy can be annoying for other motorists, but on a bicycle it can be very scary. So I would settle for both points 2 and 3. 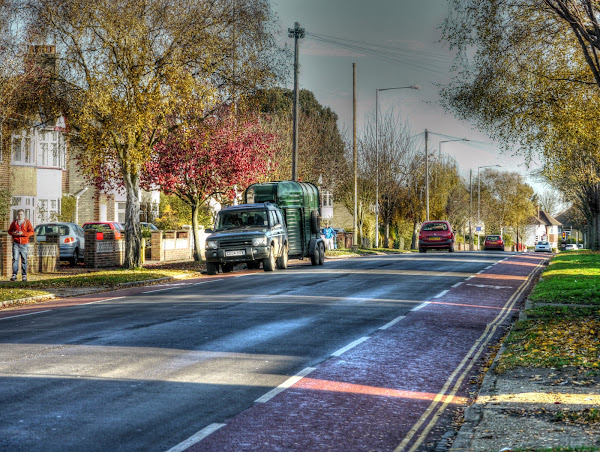 Although I cycled around the Oakington Airfield rat-run I couldn’t be bothered to stop and take pictures of yet more cars breaking the law and yes there were. I know people moan about big brother  when there is talk of “smarter” cars but hey too many people break the rules so we shouldn’t have a choice.  Anyway if you want to avoid big brother get a bike.

A couple of minor things – the Sustrans map of the CGB and Gravel Bridge Road shows an access point – er I don’t think it is. The “access point” is a grotty uneven  track a bit further up the road, which joins the cycleway on the wrong side of the concrete tracks. Which is just up by the fence in the picture – where there is a cyclist to the right of the CGB.

The other thing is that I still can’t drag the OSM map around using Chrome (24.0.1312.35 beta-m) as my browser. I can drag other maps – WTP, Streetmap, Sustrans maps, Google map – just not the OSM map. It will drag in IE9 and using Chrome on my laptop with Vista though. So clearly the problem is a rather weird combination of circumstances which might be an OSM issue or a Chrome issue or even a Windows 7 issue.

Back to the ride – this is the view looking towards Swavesey from the Gravel Bridge Road where it crosses over the top of the CGB. As you can see – without trying there is a cyclist in the shot along with a bus. There is also work on Swavesey Drain.

The CGB from Gravel Bridge Road 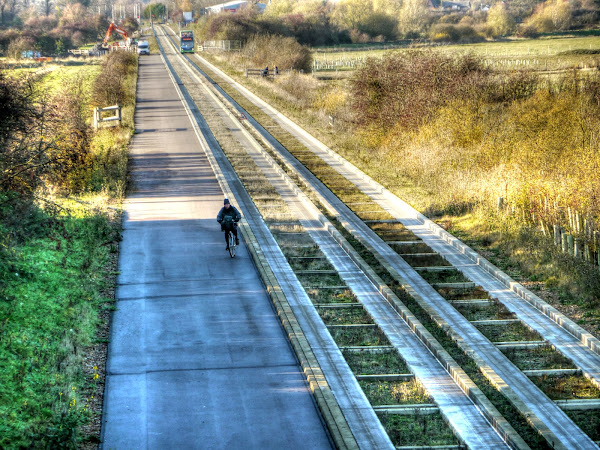 I still think that the buses look slightly surreal as the “glide” along the concrete tracks.

The CGB from Gravel Bridge Road 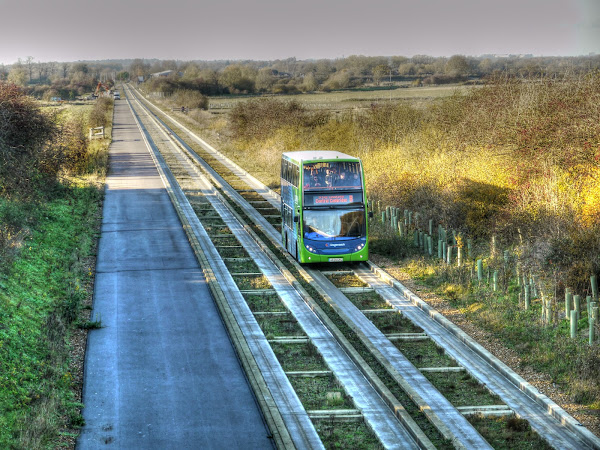 After cycling through Over and out towards Swavesey you pass Mare Fen, a 17 hectare site (map link) which is part of the River Great Ouse floodplain near Swavesey. I was expecting to see more water.

Apparently modern ice skating originated in the fens and Mare Fen (or Mere Fen as it is referred to by the Fen Skating website is one of the places that, weather willing, people still use for ice skating. (Here is the Swavesey parish plan that shows it both as Mare Fen and Mere Fen.) 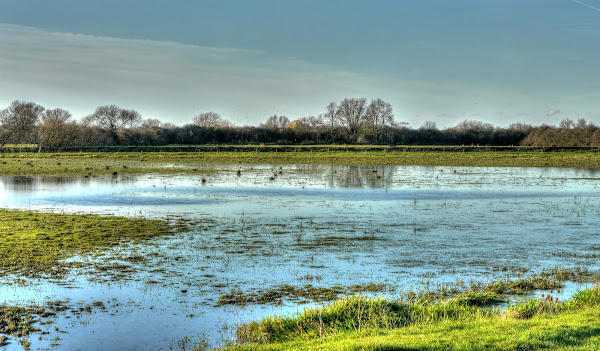 I prefer to cycle away from roads if possible. I also prefer those routes to be decent cycleable tracks. Most of them aren’t though. I often cycle through the Fen Drayton Nature Reserve – just because it is more rural and the views are better than the road way. The diversion is longer and the track surface is much more potholed than the road so take care.

At the entrance to the nature reverse – just off Fen Drayton Road they seem to grow elephant grass (a biomass crop). 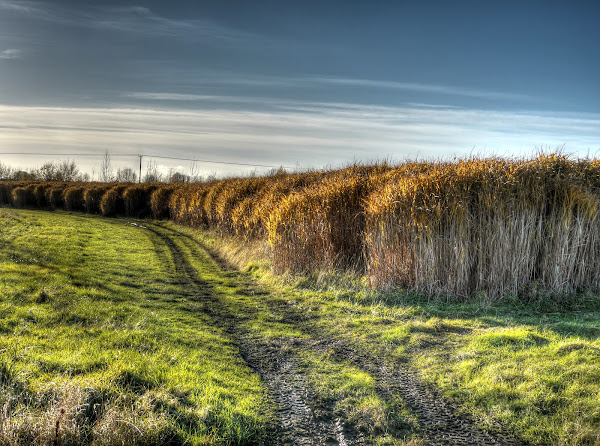 After that I cycled through St Ives and then back down the CGB cycleway. It amazes me how local bureaucracy works sometimes. I am sure that there was a good reason for waiting until the CGB was in action before doubling the size of the car park – but it seems odd that it wasn’t built as part of the original plan. Mind you given the issues between the CCC and BAM Nuttall perhaps it was wise.

Another random cyclist got into the picture. 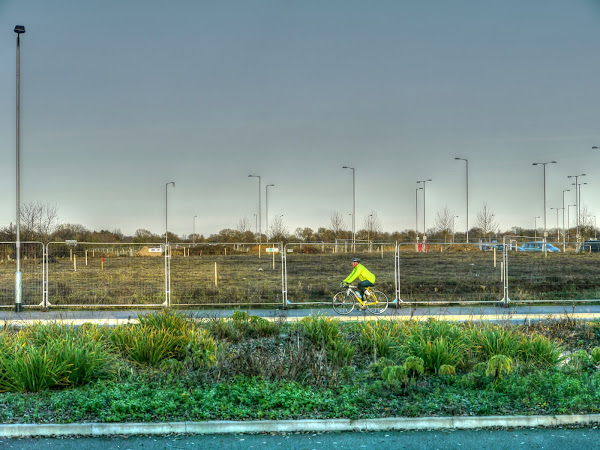 The other side of the car park – also being expanded. 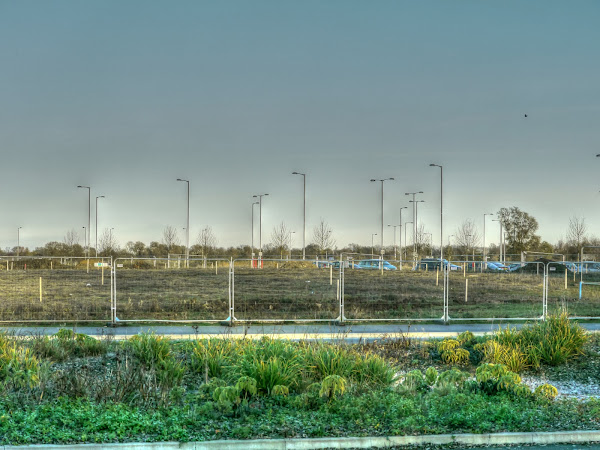 As I have said before this time of year, with the shorter amounts of daylight does tend to throw up opportunities for more sunset pictures.

Sunset over the St Ives Lakes 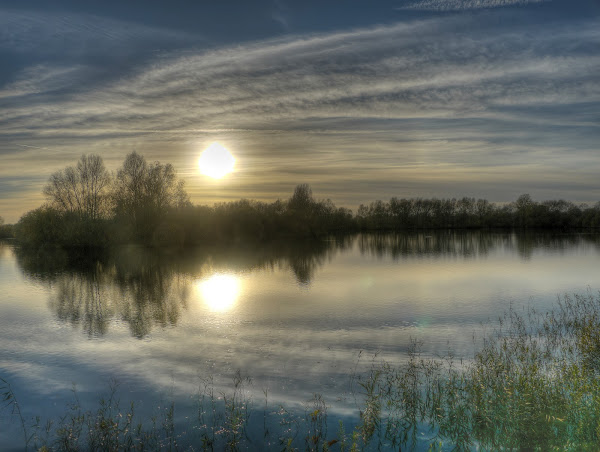 I have seen roller skating, cycling, horse-riding skate boarding, jogging and even walking on the CGB Cycleway – this was the first time I had seen tyre-dragging though. This chap (Matthew Deeprose) has been practicing for a trek to the North Pole – the tyres are in place of a sledge.

Heading along the CGB to the North Pole 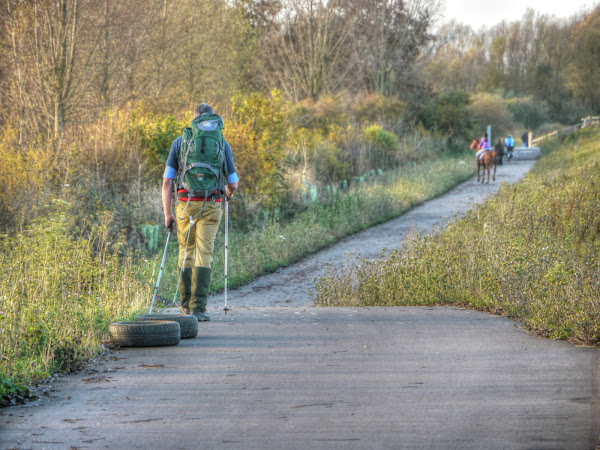 And you might think this is the same picture again – well it is sort of – but this time the people in the background are in focus -  horse rider, cyclists and walkers. I wonder if they know they are heading to the North Pole. (Here are some pictures of CGB Fen skaters.)

Heading along the CGB to the North Pole 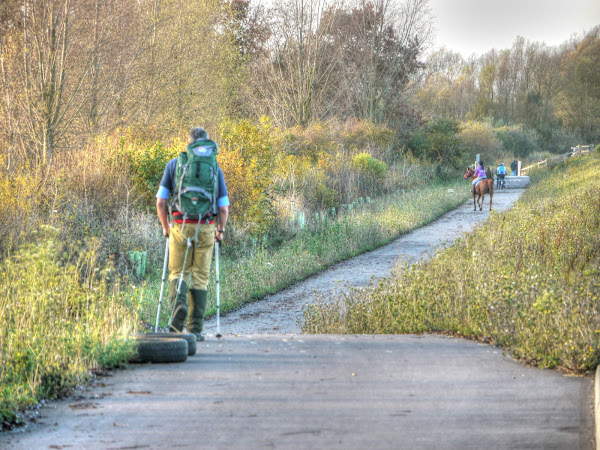 As I cycled the sun set – which meant I kept stopping to take pictures. the spire is St Mary the Virgin. 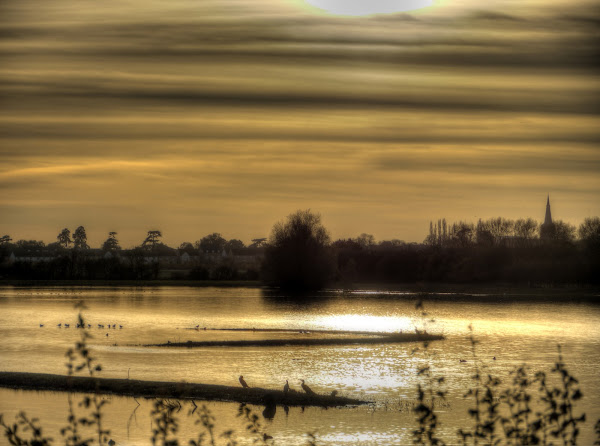 As you can see I took a few pictures this view with various zooms and crops.

Actually the sun still had a way to go before it set. 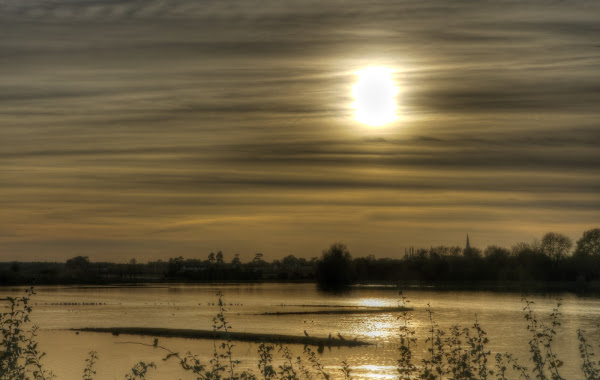 A view from further down the CGB near the Fen Drayton Reserve request stop.

Sunset across the St Ives Lakes 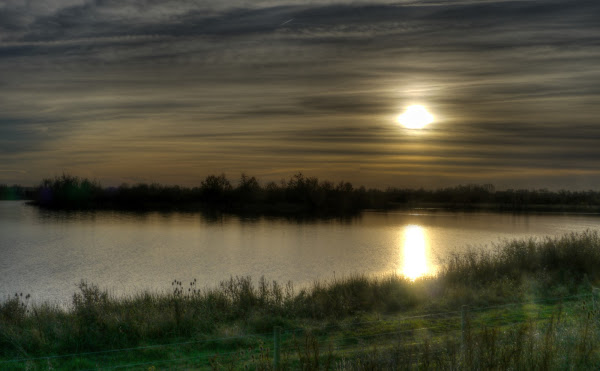 And yet another “sunset” a bit further along.

Sunset from the CGB 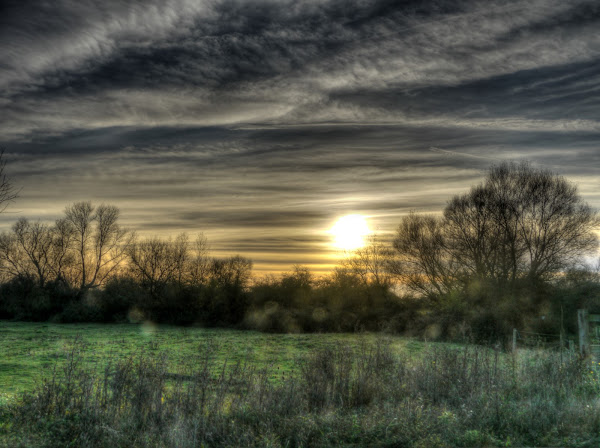 And now for a few random links that seem to be hanging around on my browser. A reminder that biodiversity is important – the Ash tree disease is spreading and the rate is increasing.

And some pictures – Landscape photographer of the year, images of Earth, another Global photography competition, some amazing solar powered trees in Singapore, some amazing real trees in China and finally Planescapes – I try to take pictures when I am flying 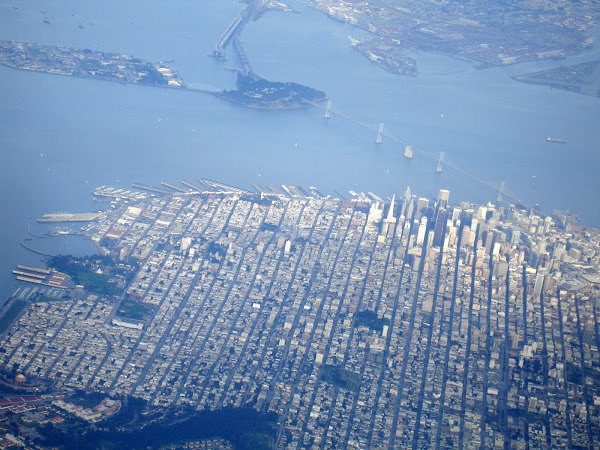 And finally – Prickwillow phone box wrapped up as a present and Exning phone box re-merges.