Non-Poets day–but cycling all the same

Friday, 23rd November: For some reason it was not a good week for cycling although I was asked to attend a meeting at short notice at the end of the week so although it would not be a POETS day I would get an excuse to cycle.

It was also a rather pleasant and sunny day so despite me moaning that all days seem to be grey days here in the Flatlands – that isn’t quite true.

But first a few snippets of news. Apparently, last year, out of 824,489 motoring injury claims almost 550,000 were whiplash claims. Clearly being a driver or passenger in a car is a pretty dangerous business. It surprises me that there is not more of a cry for car occupants to wear neck braces, just in case. Why don’t the press point out that driver x, when in a car accident wasn’t wearing a neck brace. No, what will happen is that Doctors will need a special license to approve payouts for whiplash insurance claims.

At this point I have two things to add – SPAMMERS PLEASE DO NOT LEAVE INANE COMMENTS WITH A LINK TO WHIPLASH COMPANIES - I WILL ONLY REMOVE THEM. I reserve the right not to promote pictures of cyclists wearing helmets.  Although here is one with Russell Crowe on his way to a film shoot in New York.

The lack of clarity and education about what we should be re-cycling is another frustration I have. It seems semi-random and differs from place to place in the UK. That doesn’t seem to be the best way to achieve the goal of improving our recycling. Perhaps Councils are not that bothered? Well here in Cambridgeshire we have a machine that will shred and sort black bin rubbish. Fantastic – well it would be if it worked. The £42m waste machine has been out of action for nearly three months and counting and before that it could only run at a “drastically” reduced capacity. Apparently there were construction “failings”, which the Council and AmeyCespa blamed on BAM Nuttall who also built the Cambridgeshire Guided Busway – also in legal dispute.

I never had a Moulton – but Dr Alex Moulton CBE, the inventor passed away  last Sunday (9th Dec).

It is interesting that recent Census is showing that there is an increase in more car-free households in London, yet we seem to remain a car-centric society in our failure to address the needs of non-motorists and in the way we seem to think that it is wrong to uphold the law. The Daily Mail has the headline: “Killjoy PC accused of ‘petty meddling’ as he halts pre-school nativity play to order parents to move their cars” as if the PC was in the wrong for doing his job. Interestingly the comments seem to indicate that the DM has misjudged the tone and many support the PC. I bet people who live near schools and have to suffer the twice daily onslaught of cars randomly stopping and parking support the actions of the PC.

Here in the flatlands  the Cambridge News has been a little more circumspect with the headline “Prolific traffic warden clocks up £256k in fines” – as if to imply that is too many without actually saying it. Well it seems to me that if “congestion ‘costs £4.3bn a year’”, then well done that warden. Dodgy parking is one of the reasons for congestion, along with not using the Park and Ride.

Finally – well before just mentioning these pictures – I have been commenting on peak oil and peak car and how motoring is burning money and a massive problem for our balance of trade. Well it seems that Britain might have a get out of jail card – with undreamed reserves of gas and oil – through Fracking. I welcome the reserves – but not the implications for more motoring and wastefulness.

A little while ago I linked to a piece on living on the river and being less reliant on electricity. Here is Riverside and logs fires keep the boats warm in water – at lease I assume the smoke is wood smoke.

Riverside – boats along the River Cam 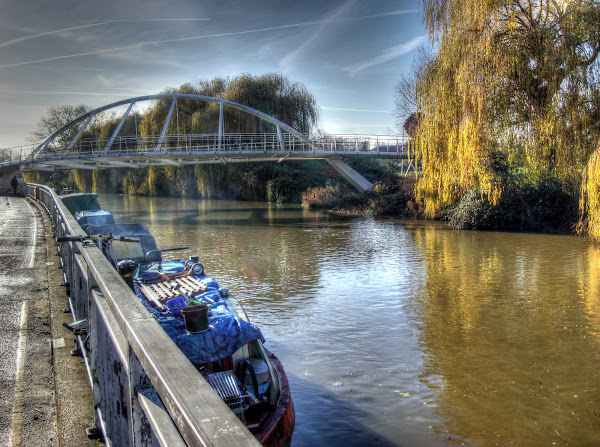 It was a lovely day and there seemed to be a lot of planes flying high in the sky. Or maybe the contrails were just more visible.

Riverside – and the segregated cycle/pedestrian bridge 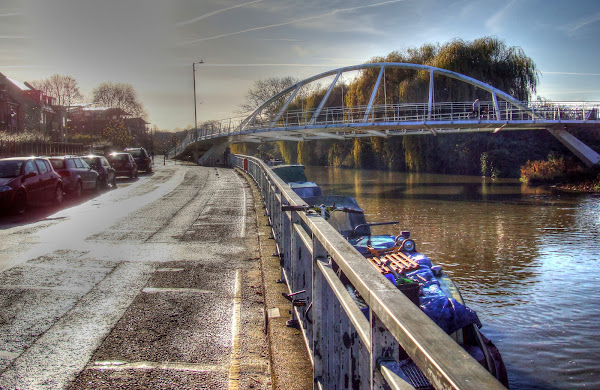 Although there is a river through the middle of Cambridge we don’t seem to suffer flooding as much as some places. The river was pretty full though.

The River Cam – overlapping the banks by Riverside 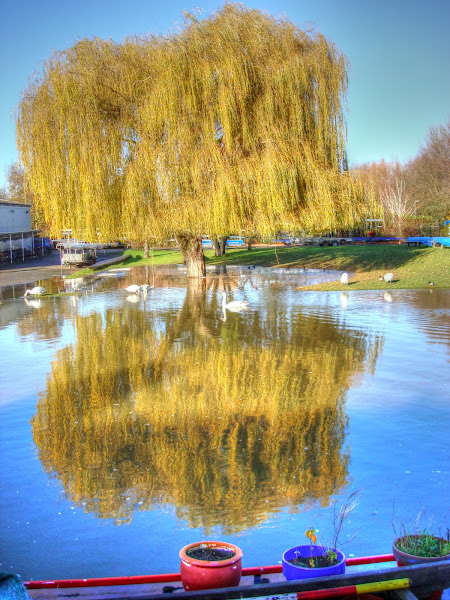 The River Cam is a popular place for rowing and here were a group out taking advantage of the winter sun.

Rowing on the River Cam 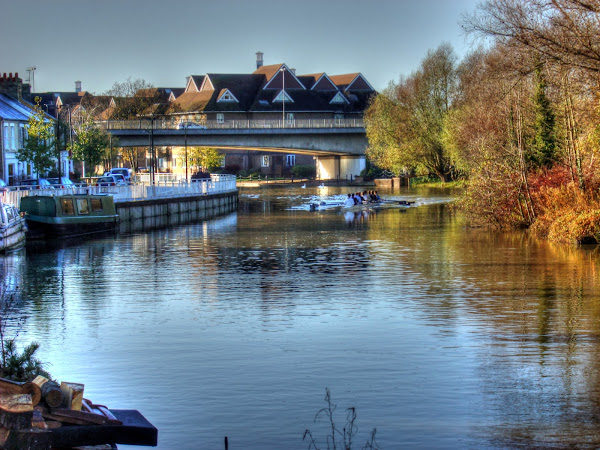 This is the same tree as above – but after the boat had passed by – the water is no longer smooth.

The River Cam – overlapping the banks by Riverside and more ripples 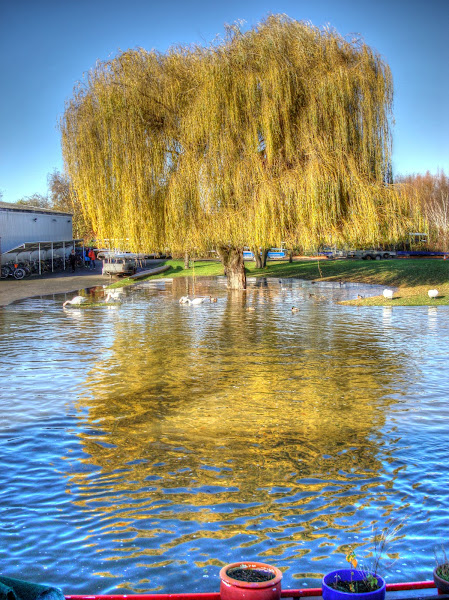 Did I mention logs for keeping warm when living on the river – there are some on that boat. 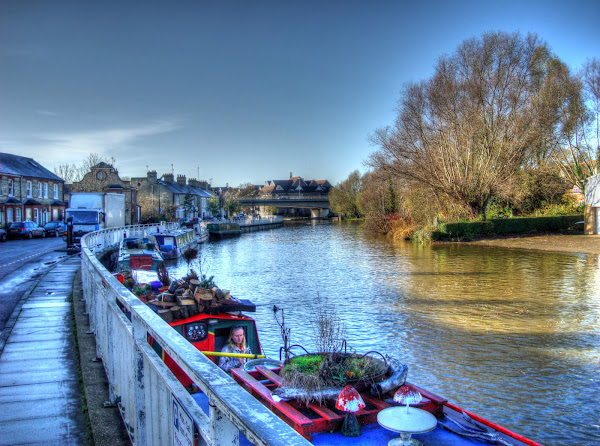 On the way home it was dark and had gotten a lot colder – so no night-time pictures.