Thursday, 7th December 2012: There is Spam, Spam and Spamity Spam. Some of the Spam is just plain illegal or wrong trying to push drugs or receive millions – just send your name, bank account details and inside leg measurement…, Others seem like the sort of stuff that gets delivered along with the mail (well here in England at least). I don’t want assorted video clip links or double glazing or solar cells thank you. Then there is the last category, well for me anyway. Perhaps I shouldn’t give this secret away, but I do read stuff that is related to things that interest me – cycling and photography. I suppose strictly speaking that might not be SPAM,  although it still seems to fit the definition.

Anyway, one of the emails was from Wex (aka Warehouse Express), a supplier of photographic equipment, who I have used for mail order and to do a sensor clean of a camera of mine. (They have a showroom in Norwich). Here is the message – Start a year-long Photography Project in 2013. Which is an interesting idea – as I gradually catch up on my 2012 posts, mainly by not cycling I have been thinking about what I want to do in 2013 and how best to achieve them.

Certainly there are places I want to visit (by bicycle) and I would really like to do the Land’s End to John O’ Groats ride again. However, if I do I don’t want to make it a trial, I want to be fit and fast and enjoy it. Although I am thinking that it would be rather nice to do it over three weeks and cycle further as well. I suppose that is the point of having a big goal, it drives other important goals, which to make it achievable all need to be planned.

Also as we come to the end of the year it seems that the excellent Yehuda Moon is taking (another) a break. I kind of see myself as a cross between Yehuda and Joe in some odd way. This strip -  “Did you hear about the cyclist” was a reminder that whilst it is easy to get cross about the worsening safety of cyclists in the UK there are also a larger number killed in motor vehicles each year. This Christmas there seem to have been more tragic motoring “accidents” than last year. We do seem to tolerate what can only be described as carnage in the name of personalised motor transport (in 2011 a reported 1,901 people were killed in road accidents with an economic welfare cost of around £15.6billion for reported road accidents).

An interesting question is how far should we go to protect people from themselves. Well I guess the answer would be based upon what is the overall cost to society. This is not the same as assessing how dangerous an activity is. There is also an element of what is the cost of such safety measures and who should be responsible for those costs. the other issue is one of risk-compensation. We might behave less cautiously when we perceive our level of protection to be higher. In a similar vein it also appears that a car driver might be less cautious when a cyclist is perceived to be protected as demonstrated by Dr Ian Walker. This then becomes a moral hazard apparently.

Anyway back to the goals for next year, I had been thinking of my own POTD (picture of the day) project, more as a way of making my posts more timely and pithy than cutting down on pictures. Mind you I also like this sort of project where the same panoramic view was taken every month for a year of a spot in the South Downs.

Mind you how do you protect from idiocy – the bridge under the Ely railway has been hit yet again.

Now I first started this blog back in September, 2008 and it has recorded some of my more “epic” rides as well as a large number around the Lodes Way. Over that time my readership has waxed and waned and certainly over Christmas it has dropped a bit. I have also seem other Blogs come and go and wax and wane over the four years I have been Blogging. Indeed quite a few Blogs have certainly tailed off a bit over Christmas as well – although the Orange Brompton is on a roll despite the small wheels.

So the trick is to work out ways of getting the various threads of activity to positively support each other, whilst at the same time being interesting enough to read about as well as write about.  I will also think about threads I might wish to pursue – I would like to cycle a bit more of the Sustrans network.

One of the things I like about this time of year is the light in the late afternoon when I go out riding. Which is why all my Posts have been a bit samey just recently. I have always thought it interesting that you often get a cloudy sky with a thin strip of light near the horizon. It looks as if there is a layer of cloud which ends just before the horizon. I don’t think it is though – rather it is the way the sun lights up the edge of the clouds. 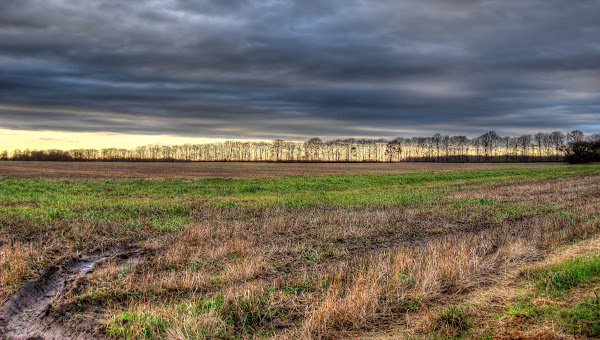 The thickness neatly coincides with the height of the trees. 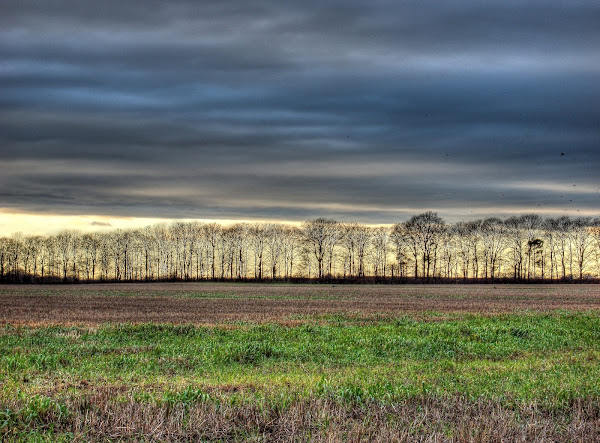 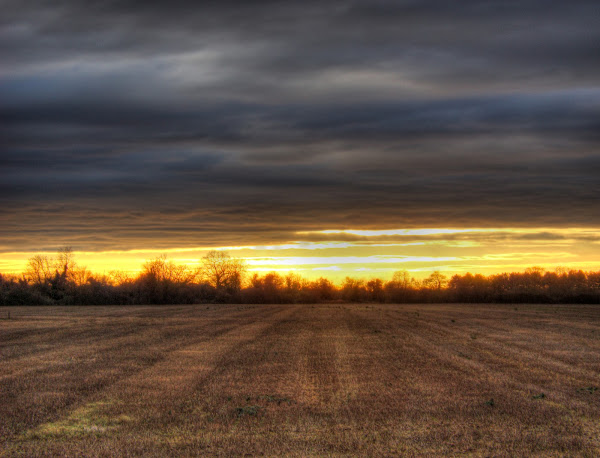 As you can see I took a few pictures from the same spot – that is the problem with a versatile zoom lens – you get lazy. 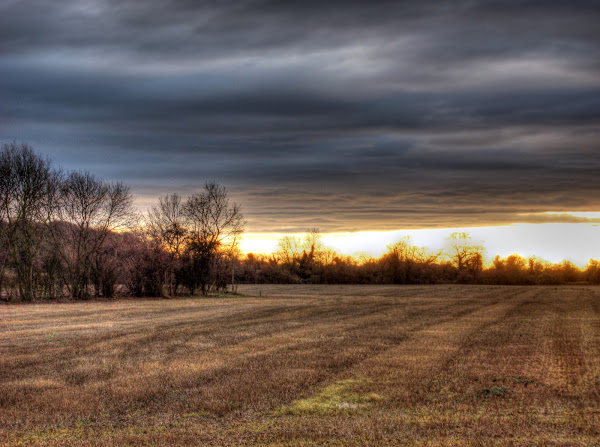 After a few pictures I managed to get through White Fen before stopping to take a picture of the Pylons marching into the light. 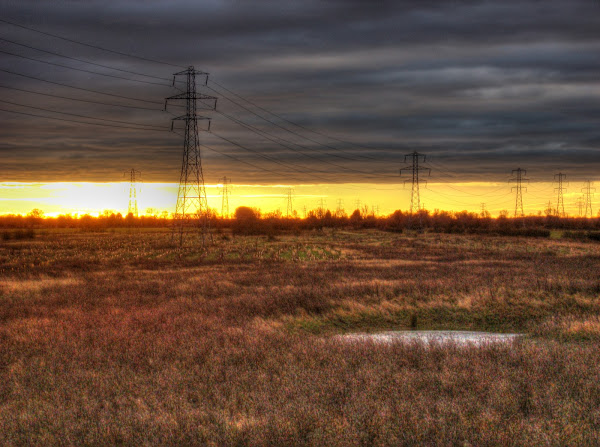 I know, they go on a bit, bring on POTD I can hear you think. 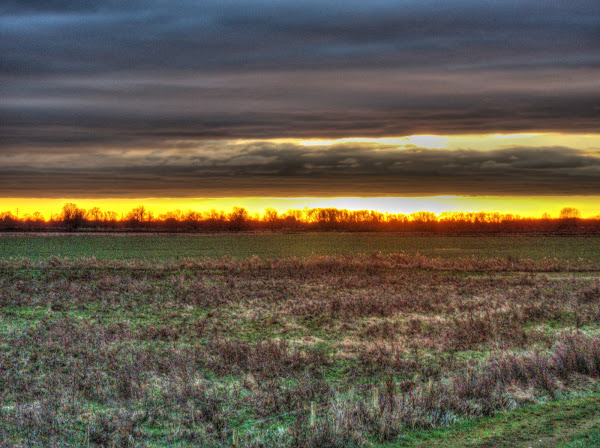 Now a proper photographer would have tables and charts that showed when the sun would be on the horizon and more to the right – “at the end of the road” to create a more perfect picture. Me – I just keep on taking pictures as I cycle by, wishing I could re-arrange things – but hey that’s life. This is a step forward though – I started of taking pictures and not recognising the dissonance. In this case the lines of the bridge and road lead you away from the light so your eyes don’t quite know where to look! 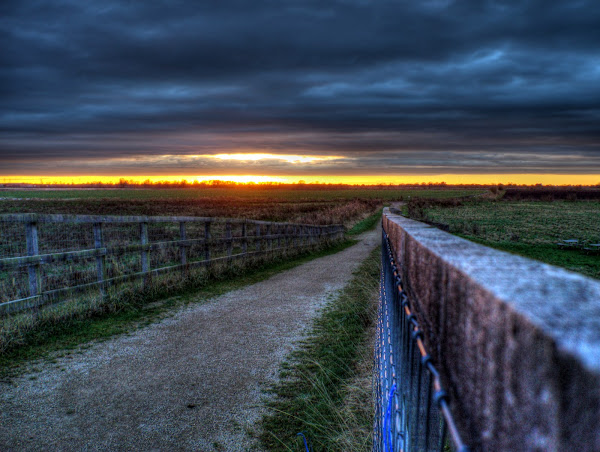 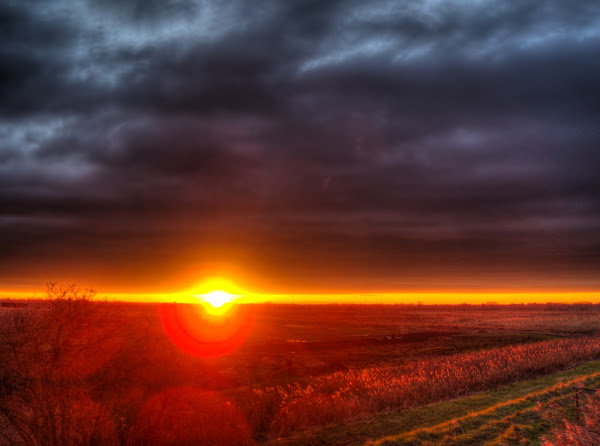 Phew I managed to dive behind these reeds on Burwell Lode and survived – the Blog (and Blogger) have survived.

Sunset through the reeds on Burwell Lode – Lodes Way 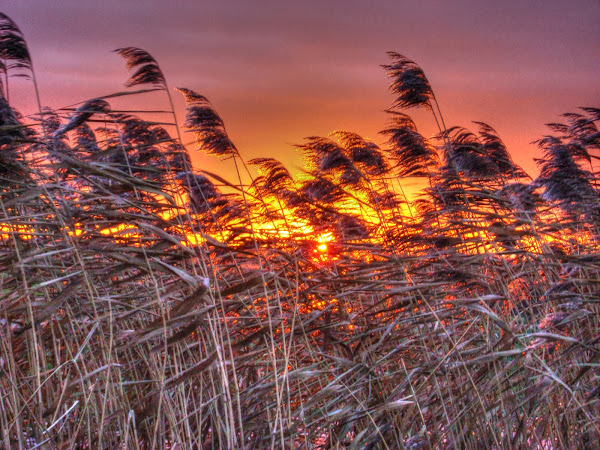 And in that post is my conundrum, I like reflecting upon the issues affecting cyclists as well as taking unrelated pictures. Talking of which – seeing these wonderful Chinese wooden bridges makes me want to check them out, with my bike of course.

Another way of doing more of what I do would be to enter Photographic competitions, I have entered two over the years and not a peep. I’ve missed the deadline for this one as well – but the images do provide food for thought.

I’ve forgotten to mention my interest and concern for the world and global warming. The West Antarctic ice sheet is warming twice as fast as previously thought. The world is more fragile than we think – and one bit of Government doesn’t seem to know what the other is doing. the Forestry Commission apparently ordered 70,4000 foreign Ash trees despite being warned of the dangers. Or perhaps they couldn’t see the wood for the trees.