Wednesday, 7th August 2013: One of the things I have enjoyed about living in the Flatlands is that for all of Cambridge being a city and a seat of learning and Silicon Fen it doesn’t take much to cycle off and find yourself a bit of natural semi-seclusion.

I just couldn’t take the urban life of a big city, not being able to see the countryside and always living with the constant drone of traffic. We are lucky that the Flatlands is also quite an agricultural centre. I fear that that is all changing. As the city gets larger and even more congested some will move and perhaps end up commuting further to and from work others will find themselves locked further away from the countryside.

Such doom and gloom is offset by the fact that property prices increase in popular cities so clearly I must be in a minority – or significant numbers of people don’t mind and are willing to pay a premium for city life. Although with all the development around the railway station being popular for London Commuters perhaps Cambridge is the lesser of two evils.

I rather like this ride because some of it seems to mix the countryside with urban concrete architecture – The Girton Interchange. It also throws in some cross country cycling including an old railway line (disused), a tow path alongside the River Cam and a view of the Cambridge American Cemetery and Memorial.

Here is the Bike Route Toaster link to the route,  it looks further than it is on the map. Which shows how small the city is. It is 36Km/22.5 miles in length and flat apart from a rise up to 40m near the end of the ride, close the the American Cemetery.

I took two “cameras” with me, my usual Panasonic GH1 along with a 100mm – 300mm lens. Which, as the camera has a small sensor is the equivalent to a 200 – 600mm lens on a 35mm camera. The trouble is that makes it tricky to take pictures of things close to me. So I used my Samsung Galaxy S4 for wide-angle work. The S4 will also take panoramic shots by panning the camera across a scene for an even wider angle.

Here is the map – you can see where I was when taking the Horse and rider picture.

A Loop around Cambridge 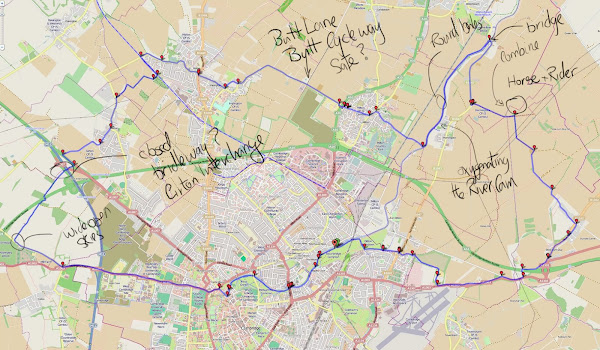 This picture is taken from the same spot with the horse and rider in the same place – but using the maximum zoom of my 100-300mm lens. The rider looks a little stern and seems to be carrying quite a long whip! 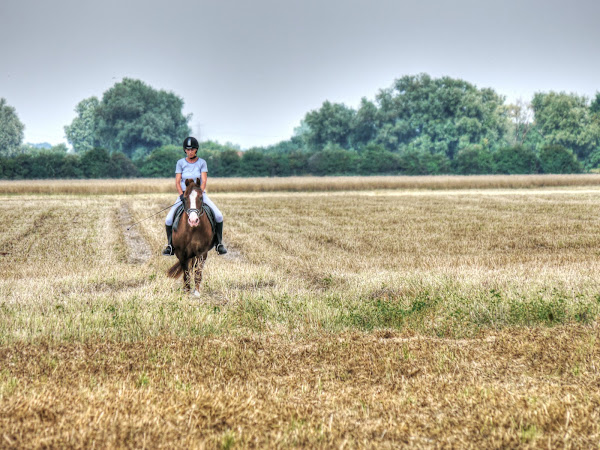 That Combine I mentioned – it was a New Holland TX66.  Here is a used one for £30,000 – 1994. You can check out what people think of them on the Combine Forum.  Like planes they seem to measure the engine hours. 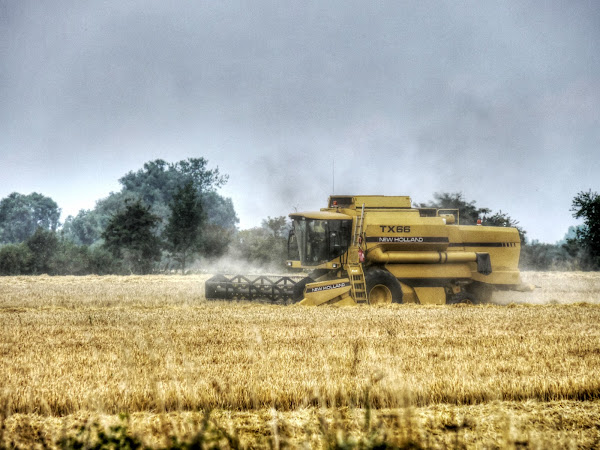 The view down the River Cam from the bridge at Clayhithe 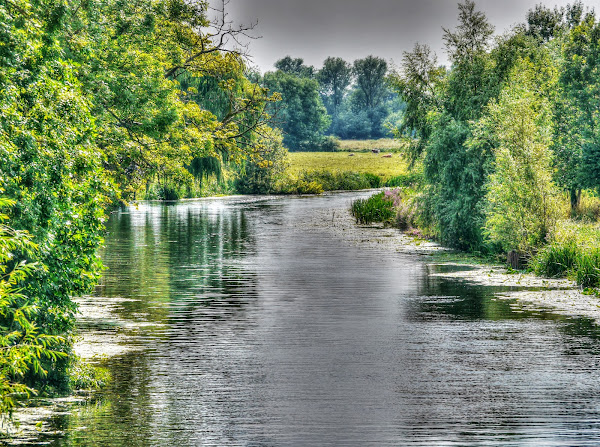 This picture  creates a dissonance for me. You don’t expect to see freshly baled straw on green grass.

Round Hay Bales alongside the River Cam 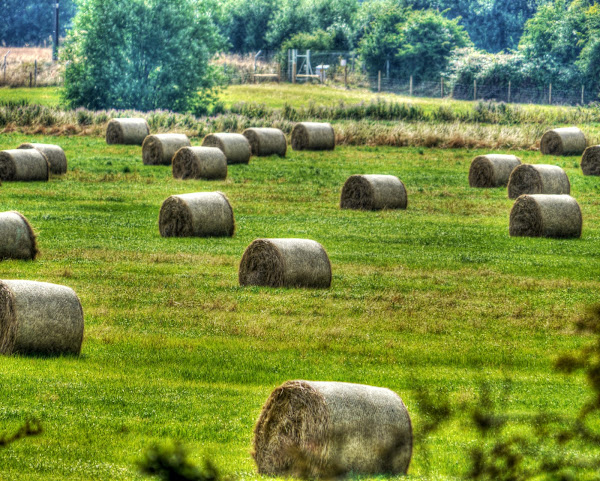 Apparently although the River Cam has good quality water it has suffered from poor habitat in places.  The recent heatwave also killed hundreds of fish between Milton and Upware. They use hydrogen peroxide (H2O2)to boost oxygen levels.

I assumed that these pumps were aerating the water – but perhaps they were putting hydrogen peroxide in.

Improving the Water Quality of the River Cam (Horningsea) 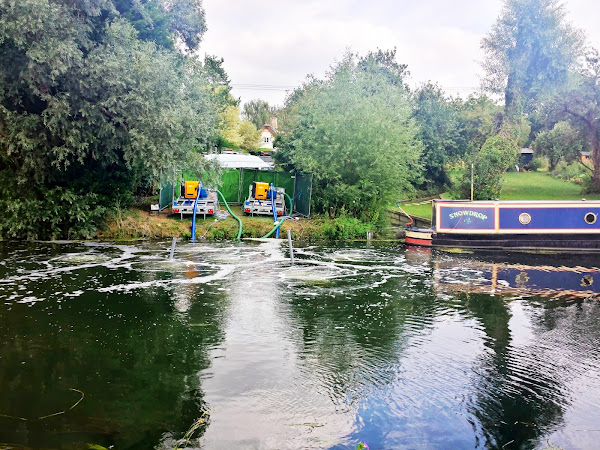 Regular readers will know that I feel badly let down by the Cambridgeshire County Council and there on-off cycle lane between Impington and Milton. I feel that is a classic British approach to cycle infrastructure. It has taken ages in the planning, still isn’t finished, was funded by several sources and is crap.

This bit is between Milton Lane and the Recycling area. I don’t know whether the pavement – which has been made shared-use will get improved or not. (I doubt it though.) The road has a 50mph limit – but some vehicles seem to ignore it. (Not the van IMHO.)

The shared-use sign is hidden, the path is not wide enough and the target users – teenage kids – sorry this just isn’t good enough. 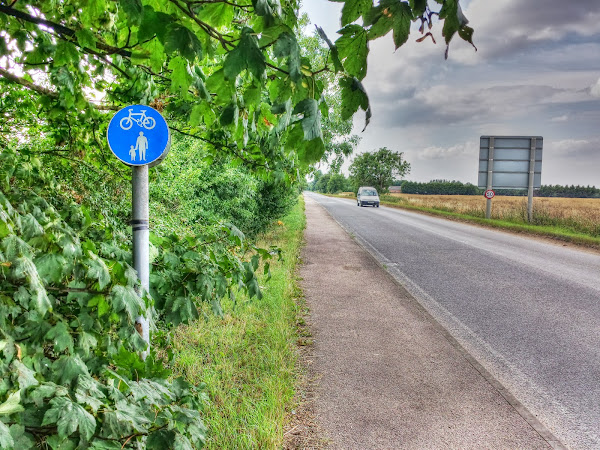 After that I eased my blood pressure by joining the CGBC (Cambridge Guided Bus Cycleway) and then along a bridleway form Histon to Girton. The bridleway has made it onto Strava.  In Girton I headed down Washpit Lane in order to cross the non-Motorway bits of the Girton Interchange and then under the Motorway bit.

Frankly I think that it is scandalous how major roads get built where people expect to cross but no safe  provision is made. Now there are some bridges over the A11/M11/A14 but where the path crosses the Interchange you have to take your life into your hands and get across. (It gets a mention here as spectacularly broken – end comment.)

Mind you when looking at maps that pre-date the dual carriageways and motorway such as this 1947 map I can’t find a trace of the bridleway that now heads from Washpit Lane to Madingley or on this c1800 map of Girton and Madingley.

On the CCC rights of way map is is shown as 154/2 Pathno: 2. Now it seems to me that most paths/ rights of way exist because they are routes from one place to another. In this case bridleway makes sense as a route from Girton to the American Cemetery via Washpit Lane. Albeit the junction means that you would have to be a brave horse rider to do it.

Now I knew what I was letting myself in for. The first time I found out about the bizarre junction crossing I had cycled from Madingley to Girton. This time I found some cones on the edge of the road – there were some roadworks around.

Roadworks on the Girton Interchange 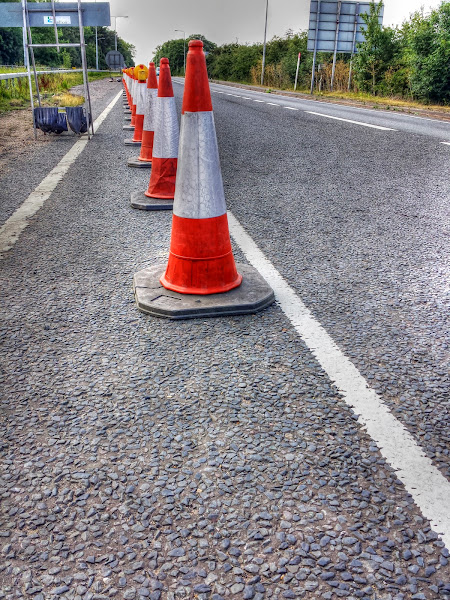 There bridleway had been blocked, although there weren't any warning signs. It seems that there is some activity alongside the M11 adjacent to the bridleway tunnel under the M11.  They even seem to be re-surfacing some of the bridleway where it crosses the junction.

As you can probably work out – I didn’t let the cones stop me from crossing. Having come this far I wasn’t that keen on re-tracing my steps and there was zero information.

After crossing this bit and entering the tunnel it it seems that one of the reasons they have “closed” the bridleway route is because they workers have parked their cars in the tunnel.

Madingley Bridleway – under the M11 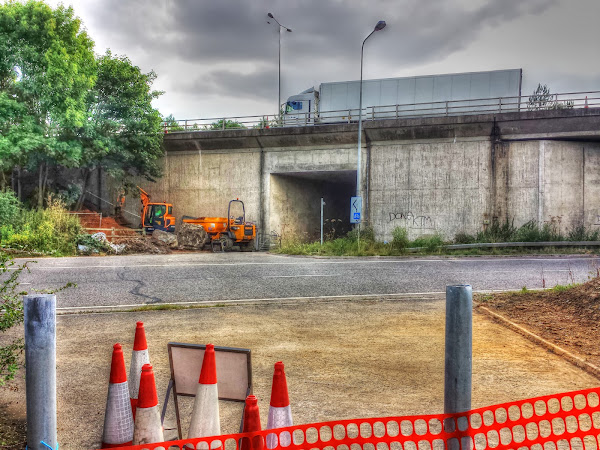 After you run the gauntlet of the Girton Interchange you also cross the A428 dual carriageway – fortunately there is an accommodation bridge. Then after passing through a bit of woodland the fields open up.

They open up more than I expected – the edge of the field has been cleared – the field boundary seems more open – I must check an old picture to see what was there before. (Not much from the satellite picture – no hedgerows were harmed!

The same view – but without being panoramic. 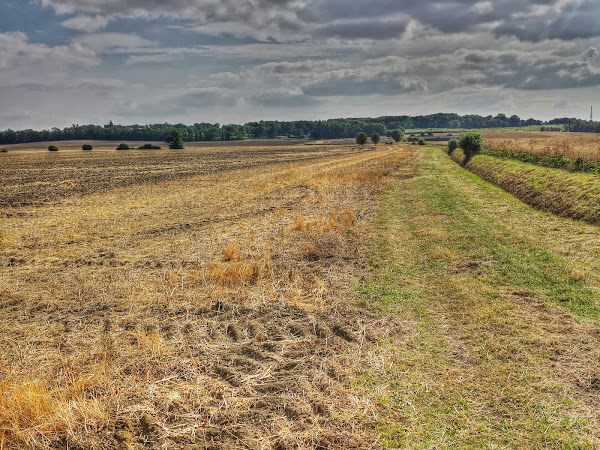 The other end of the bridleway where it meets the Cambridge Road.

Other end of the Madingley Bridleway No 2

I must have a look the next time I am in the area to see what was happening at the interchange. My guess is that it is part of the additional of a new lane to Histon.  The scheme will be completed in 2014. Apparently they are going to be spending £3.06 million of your English pounds – I wonder which cycle budget that came from then – The National making Bridleway safer for cycling (by closing them) budget?