Monday, 19th August 2013:There is no doubt about it – fine weather makes cycling so much more tempting.

The only snag was that the sun in the morning seemed to disappear a bit, having said that it wasn’t too bad and once the temperature is over 20oC it gets comfortable when cycling. The other plus point was that there wasn’t much wind.

The next question is where should I cycle. I hadn’t been able to get out over the weekend and so felt a slightly longer ride was in order.  I am always interested in new routes opening up on the National Cycle Network around me. Whilst I reckon that they don’t always provide a direct route for  leisure cycling they generally do provide a scenic route.

The snag is that Sustrans (as do many organisations) seems to have re-vamped its Website. So it certainly looks a lot snazzier, but I can’t seem to find what paths might have been changed so easily. In fact their own page on the Lodes Way has gotten the route marked in the wrong place. They seem to have put a dot on Kingfishers Bridge and not Wicken Fen.

I guess I am not really their target audience. I already cycle a bit. This time the info came from my wife she normally goes walking with friends once a week. This time around she had been along Thicket Path between St Ives and Houghton.  It is good to see that the Department of Transport’s Local Sustainable Fund has been used for more than just an advance stop light for cyclists on a motor vehicles go faster junction.

Anyway she reckoned is was a great improvement and that it made things easier for all users – she made no comment about speeding cyclists though.

So that became my destination, the route was easy – out along the old NCN route to Houghton (now the NCN24) and back along the new NCN to Cambridge (NCN51). Here is the Bike Route Toaster Link – it is 58Km/ 36 miles long. I was on a bit of a deadline so I didn’t take that many pictures along the way.

Although here is a bit of social history – the Red Telephone Box and the red post box. According to this undated document by Ofcom there are around 67,000 public call boxes and BT reckons that 6 out of 10 such call boxes (owned by them) are losing money. I am surprised that as many as 4 out of 10 still make money.  As you can see this one no longer takes cash. I would imagine that even fewer get used nowadays.

The trouble is many of us probably feel some nostalgia for the phone box. I remember the phone boxes that were around before Subscriber-Trunk Dialling (STD) and the public telephones had an A button and a B button. You put your money in and then dialled and pushed A to be connected and B to get your money back. The last link mentions a trick to get free calls, I had heard that when I was young – it never worked when I tried it though.

Next to it is a Post box again probably a sign of different times. During their day they were probably seen as permanent aspects of society. But here we are 30-40 years on and the world is so different. Two factors have affected the telephone, firstly as more and more households gained phones then our need to pop down to the phone box reduced.

However an even bigger trend has been the rise of the mobile phone, with 97% penetration in the UK. (Fig 1a. shows subscription by age here.) The idea of going into a smelly telephone box to make a phone call must seem bizarre to teenagers of today. I seem to remember they were smelly when I was a boy and things haven’t got any better.

Then we have the Post box – which is good for letters, but not for parcels. During the same period we have seen a significant increase in email and e-billing along with a substantial increase in Internet shopping. As a result some of the data being supplied as part of the Royal Mail flotation is a document by PWC – Outlook for UK mail volumes to 2023. Which forecasts letter volumes to declines by 55 per annum from 2013 to 2018 and then at 4% p.a. until 2023. Whilst at the same time Parcels will increase by 3% p.a. from 2013 to 2018 and then at 2% from 2018 to 2023.  Letter boxes will perhaps also become a thing of the past.

Where will it end? Well we are starting to see the rise of 3D printers, maybe we will print out our own “products”.

Whilst writing this I also came across this story about the Phone Box at Burrough Green – “Phone box ‘library’ is destroyed by arsonists” in June this year. Well all I can so is that whoever did it was a tosser(s).

This phone box is in Longstanton. 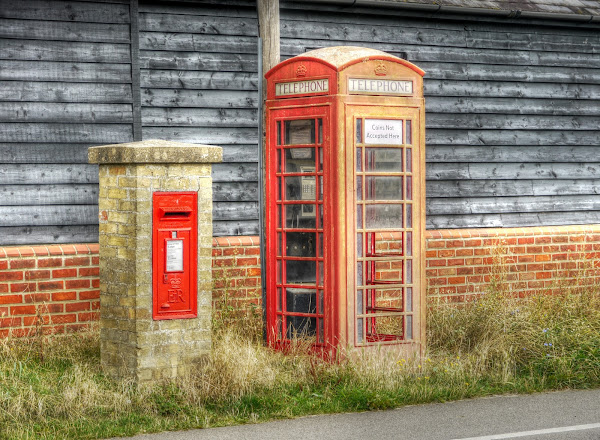 The route I took, a wibbly route out and a more direct route back.  I forgot to mention that the route takes the airfield road between Longstanton and Oakington. It is a route that is banned for most types of motor traffic (there are exceptions for access and public services and hackney carriages.)  When I cycle along it, given its status and the relatively poor state of the road I would like to think that there won’t be any anti-social motorists. There are of course and some of them speed along. Although if I stop and take pictures as they pass that tends to slow them down a bit.

Perhaps it is time for another crackdown. Girton Parish Council raise the issue with regards to increased traffic with the Northstowe development.

A Ride to Houghton and back from Cambridge 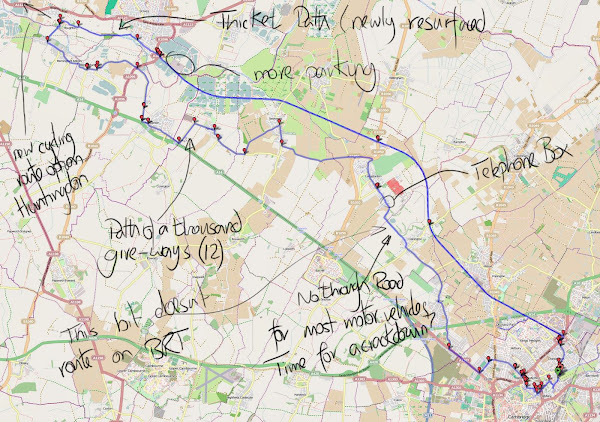 One of the bug-bears I have is what seems to be the random way in which some pavements are designated as shared-use and some aren’t. Even worse some of those that are seem to lose their signage and so it all becomes unclear. Then we have the PCC treating it as the crime of the century. Surely if the roads were safer then fewer cyclists would be driven of the roads onto the pavements.

Even worse, in this case a whole bunch of give-ways have been painted on the pavement. So who has responsibility in the event of an accident, especially if it is a youngster. Cycling infrastructure – puh. 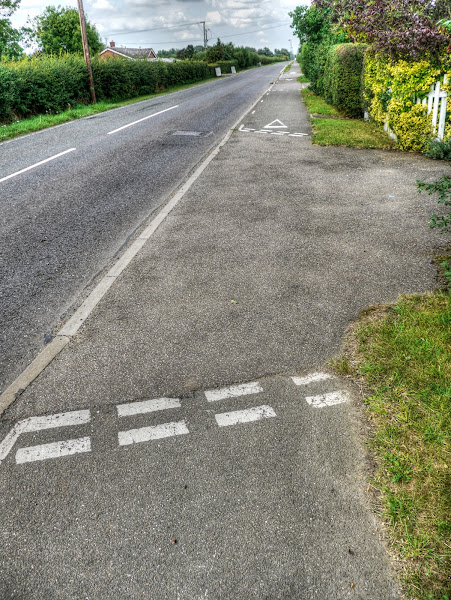 The worst bit about this route is crossing the A1096 at the roundabout.  It is tricky as the sight lines are not good and despite the area being quite built up cars whizz along. The route then ambles along through the Hemingfords, where it seems that at the posh end a lot of new building is happening. Then the route turns off down to Houghton Mill and you get to try out the Thicket Path.

According to the OS map Thicket Path is a footpath, however it seems to me that it also long been used by cyclists as well. For the record, I didn’t see any thigh-bulging Lycra clad cyclists on the route and never have. Personally I think it is a great improvement, my wife and here walking friends also think so. As I (mis)understand it footpaths don’t have the same legal status as pavements and so you can’t get a ticket for cycling along a footpath.  Or maybe there are secret cameras and the PCC will use it to bump up the crime detection rate.

Thicket Path, St Ives to Houghton – and jolly nice too 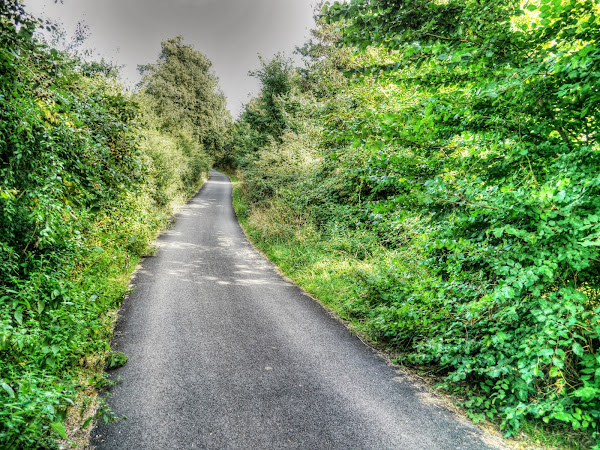 It isn’t totally clear quite where a cyclist can go to get through the centre of St Ives, although I use the route shown on the OSM cycle map down Crown Street and the Pavement. There is then quite a wait at the traffic lights to cross Harrison Way, clearly optimised for the traffic I reckon.  Then you enter the Guided Busway area. The Park and |Ride car park has been extended.  The car park has been increased from 500 to 1,000 spaces.  The park and ride  also has 50 cycle spaces. Although this link indicates there are 500 parking spaces at St Ives. Ah well I could count them, but life is too short.  Perhaps they got lost in the budget mistake. 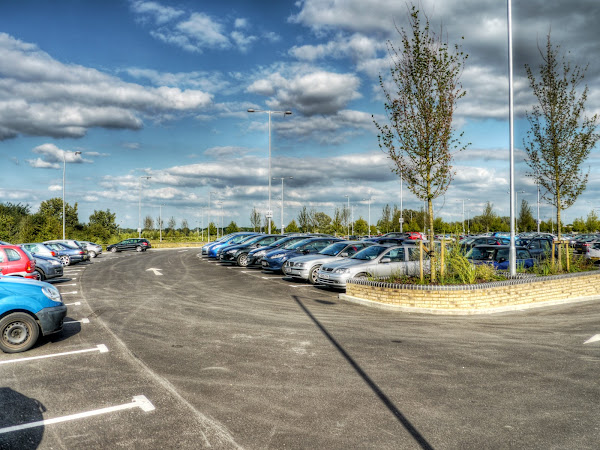 This is a panorama view – with the busway to the right and the car park to the left.

It was a very pleasant and quite fast (for me) ride home. I only stopped the once. Some interesting graffiti on the bridge under the Gravel Bridge Road. The message could have been a little more uplifting.  It also made me think about graffiti and say telephone boxes or pieces of art strewn along a trail. This isn’t bad although I am sure there are some councillors who might splutter at the thought. However the thought was really one along the lines of there is loads of visual 3D graffiti from Wind Turbines through to Telephone boxes and Pylons.

So why is Government Graffiti allowed and citizen graffiti not? As another citizen I asked for neither. 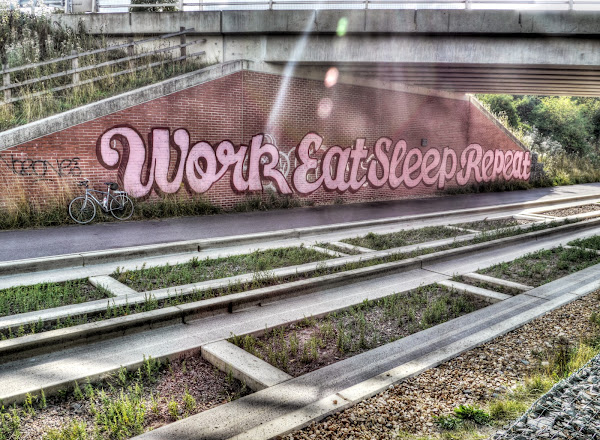 Mind you if I had done this one I would perhaps added exercise and then used pictograms for each of the activities? 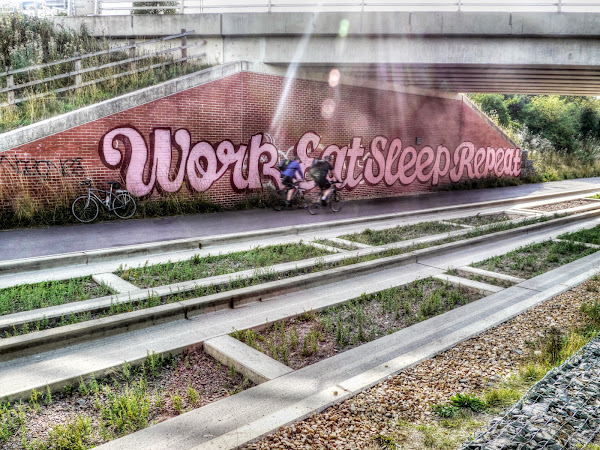