Wednesday 17tf, November: There are times when stuff just seems to get in the way of my cycling, although looking at my cycling records, it often coincides with November and December. By the time the New Year comes around I am obviously reinvigorated. I guess the challenge is that in nice weather I am better at making excuses to go out riding whilst in bad weather it I attend to the chores because of the miserable weather. Mind you I am not the only one - other cycling bloggers also seem to be afflicted - "a very lazy week" and "Tour de Fingest" both express some concerns. Most of us do carry on through the little wobbles though - it is the big car induced wobbles that worry me.

Talking of which, the matter of courtesy reared its ugly bonnet recently, so forgive me for putting in the complete headline, "That'll teach you to block my car in: OAP caught on CCTV shunting vehicle blocking his garage". This in my mind clearly demonstrates that courtesy is dead on the roads - both the "blockers" and the OAP took the selfish approach. Since the "blocker" was, in my view, partially responsible I wonder whether they will get a reduction in the damages (for the repair costs) that might be otherwise be due? Or does that set a bad precedent for cyclists with regard to helmets? It also appears he was banned from driving for a year and had to cough up nearly £2,000 pounds. Yet in another case a Lorry driver involved in the death of a cyclist was fined £200 and got three penalty points. is it me, or does this seem imbalanced. Is property more important than human life. Now I am not a lawyer so do not understand the legal "niceties" but...

I had another evening meeting in Cambridge and got thinking about cyclists and lights. On my way home afterwards there were 14 cyclists with lights and one without. It had rained during my meeting so I assume had put off people cycling and 8.30pm is not the rush hour. However on narrow cycle paths they are a bit of a menace. My solution would be more checks with either a fine or the option to buy and fit lights. Mind you I would also like to see enforcement relating to motor vehicles infringing upon cyclists' rights as well. The trouble is it is harder to have an "every one wins" approach, like the fine and free lights in the link above, especially when cyclists are treated as second class citizens.

Mind you if you think the odd strange bit of cycleway design is odd in Cambridgeshire then check out Waltham Forest. It does appear that we will get more 20mph speed limits. Although I hope this does not also mean more Traffic Calming. Maybe my bike handling skills aren't what they used to be - but I find speed bumps at night, after they have been crushed and worn down, can be quite unnerving when cycling amongst traffic.

This is Parker's Piece at night looking up from the University Arms.

Taking pictures at night can be interesting, you can't always see what buttons you have pushed on the camera. I don't use flash when taking this sort of night picture - except I must have accidentally turned it on. It doesn't quite have the power to illuminate the whole of the area! 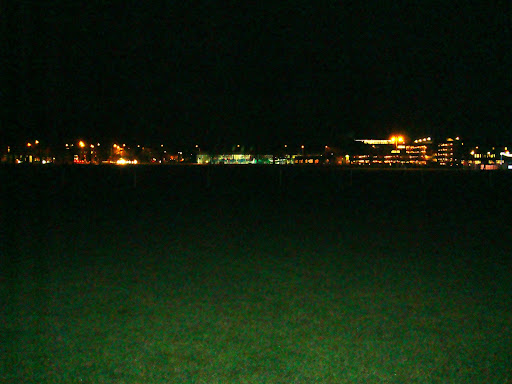 A closeup of the Reality Checkpoint, although I could have done better, I must think about framing it next time. This is a busy intersection in the morning with pedestrians and cyclists passing through.

This is quite a space and used quite often for events. I am not quite sure what this construction was for up near the toilets.

Another picture down by the River Cam - it was the Red, Green and Blue in this scene that caught my eye. These flats have their own navigation lights for their mooring area. A pity the Cam does not pass the science park then you could take the speedboat to work - CamThree perhaps. 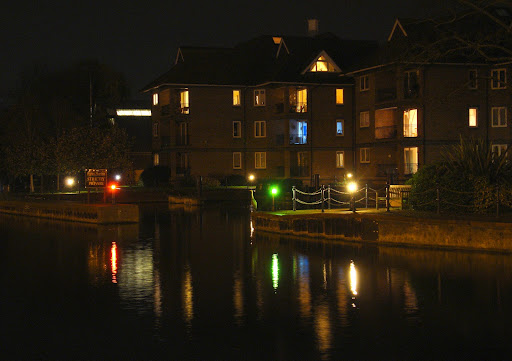 These pictures were taken with my pocket camera and so the maximum exposure was 2 seconds. I could not be bothered to try to get some better pictures of the cycleway lights on NCN51, perhaps I ought to try NCN11 by Addenbrookes.

I did come across a pair of cyclists on a Tandem with a puncture, I lent them a better pump, but the problem was a split in their inner tube and fortunately I also had a spare inner tube. There is nothing (well there are really) more annoying than having a puncture and finding that the tube is un-patchable. It has happened to me more than once (I must be a slow learner) so now I always carry two spare inner tubes when cycling and I always ask fellow cyclists if they need a hand when "broken down" at the roadside - you never know when you might need a bit of help. And yes - I have been offered help quite a few times when I have punctured. Here is an interesting way of pumping up a bicycle tyre from a car tyre (or does it work the other way round!)