Cycling for pleasure or endurance testing?

Sunday, 28th November: After the rather cold ending to my ride yesterday I thought I would think more about when I started to feel cold during a ride. Generally I always start off feeling warm and I don't normally feel cold for some time, but once it has crept up on me it takes a bit of effort to warm up again. In fact what normally happens is I half-heartedly shake a bit of warmth into my feet (and occasionally into my hands) and then just carry on to the point where I get home and my toes have gone so numb that when I change shoes I struggle to push my feet in as the toes (they no longer feel like my toes) get in the way.

This ride was a fairly standard ride for me, basically out to Wicken and back on one of the many permutations now possible thanks to Sustrans, the NT and many other unnamed individuals and organisations. I was going to say, who go without thanks - but let me at least say thank you to all those who work to make cycling a more pleasant and viable way to get out and see the countryside.

So why have I included the map, well I am not sure, I couldn't find this actual ride mapped before. Which doesn't mean I haven't mapped it, it just means I couldn't find it. It can be found on BikeRouteToaster (BRT) at this link. It is around 57Km/ 35 miles and pretty flat as you would expect from a ride in the Fens. Although the byways and bridleways tend to be muddier at this time of year the wintry weather has frozen them so they tend to be easier to cycle along. You just have to watch out for the large tractor tyre ruts with ice and puddles at the bottom. I didn't get out very early so the sun started setting before I had gotten very far so all of the pictures were taken in the first sixth (?) of the ride. So I have labelled the map to show where I took them.

It is a great pity that the straight line running diagonally through the label P1 is not a decent (and legal) cycle track it would make a great cycle commute through to Cambridge (or the Park & Ride on Newmarket Road) from Lode and Long Meadow and beyond.

When I set out I had the usual multi-layers of clothing and was too warm if anything. I certainly did not feel as if staying warm was an effort. When I set out it was below freezing (around -1.2C) and yes I did take a hankie with me.

This is what I mean about the byways being frozen, Low Fen Drove Way is quite flat, but can be soggy, in this weather it is firm, but not too slippery. I passed an RAC van parked up by the road near the bridge over the A14 (on Low Fen Drove Way). Presumably the motoring organisations have their work cut out for them during the bad weather, both with cars that won't start and myriad accidents. 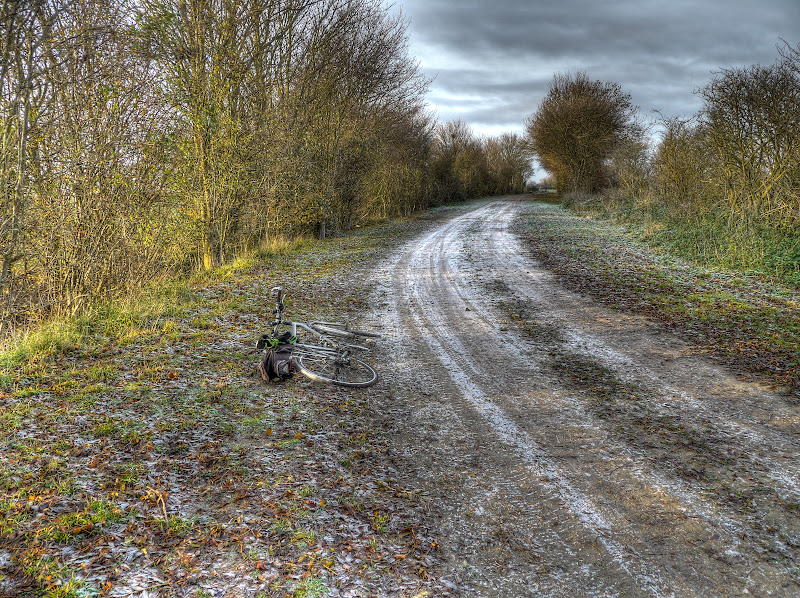 One of the new crop of cycleway around the Cambridge area (thank you for those as well). It does surprise me how long it can take to build a complete cycle way, this one still had signs warning users that it is incomplete. At least they seem to expect cyclists on it though. There is no point in having a decent cycle way unused because it is almost finished. It is better to start using it when there a decent chunks of it available. 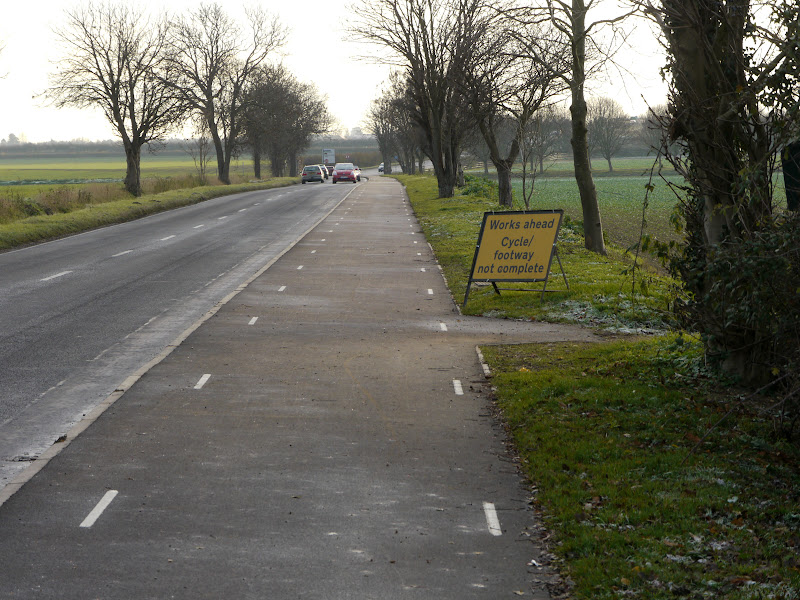 There were some interesting clouds in the sky as I cycled along the Harcamlow Way (bridleway) - is snow on the way? When I set out it was certainly cold enough. 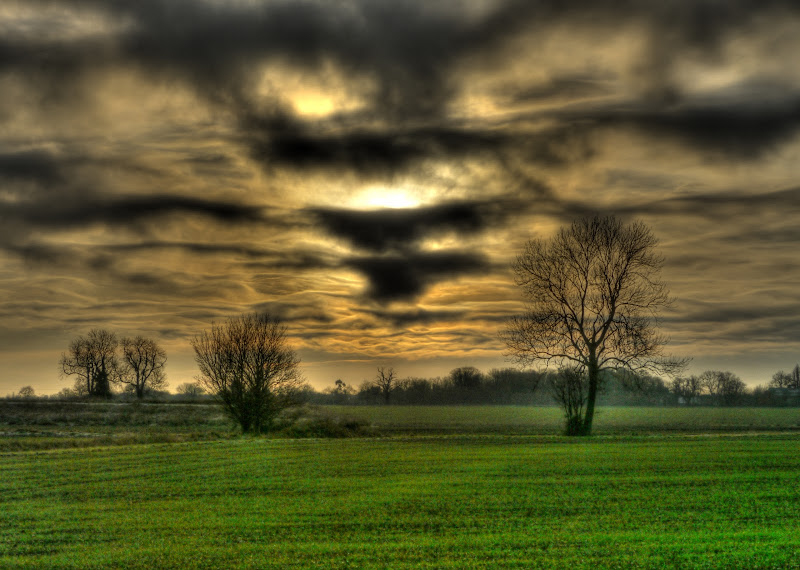 As I approached Lode, along the track of the old Cambridge to Mildenhall Railway Line (which is I believe a permissive bridleway) the sun was already pretty low in the sky. You can see from the way the leaves have dropped from the tree in the foreground that it has been cold and not windy. All the leaves have pretty much dropped straight down. 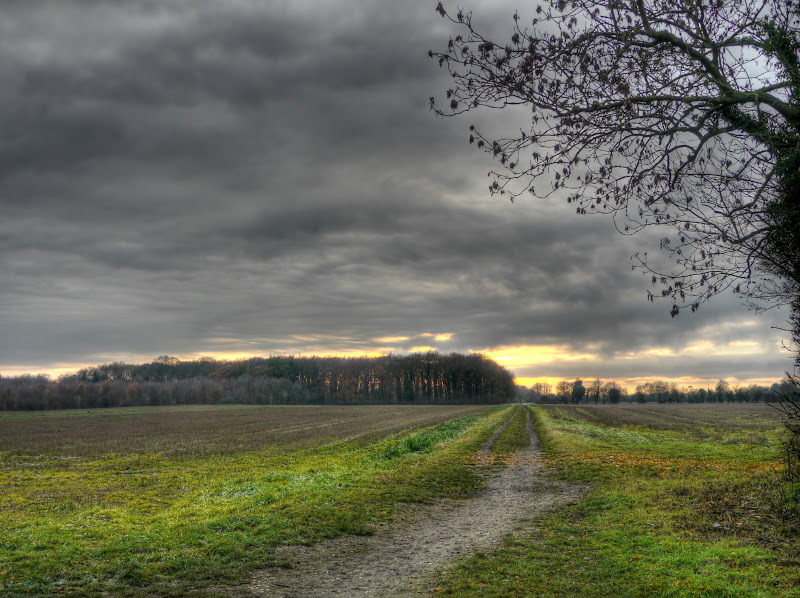 The same view, but with more zoom. I liked the way the orange glow was still visible through the trees. 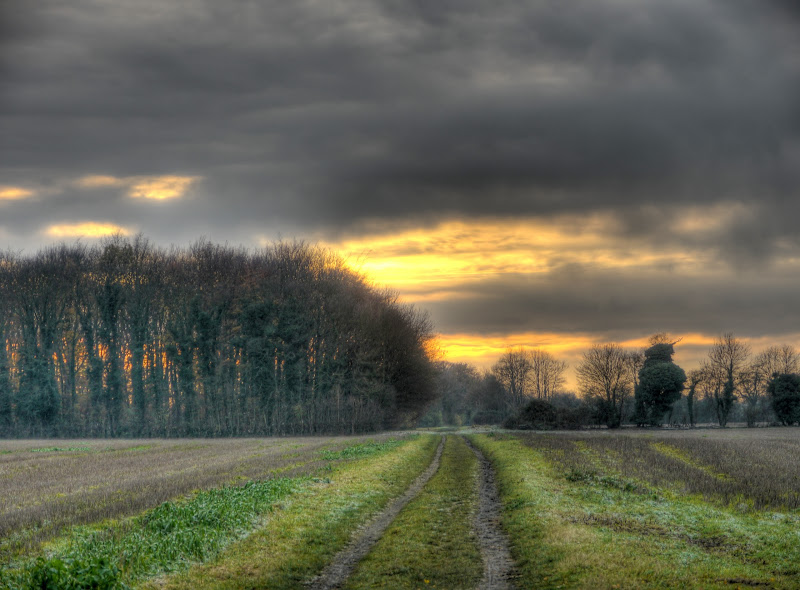 At this point I was still comfortably warm and not feeling the effects of the freezing temperatures. However once it was dark I started to feel colder and the temperature also fell a little further (-2C ish). After around one and a half hours my toes started to feel a little cold and after two hours my fingers were also feeling colder. Unlike yesterday I did stop and do a bit of hand and foot waving to get some warm blood back into them. As I mentioned yesterday, keeping my hands warm is not really a problem, despite the fact that I am hanging onto freezing metal handlebars. I guess my feet suffer constant pressure as well as being close to cold metal pedals.

There were quite a few people out and about despite (or maybe because of) the wintry weather. I was surprised how many cars were to be found deep into the fens around Lodes Way. One thing I did notice is that with my new brighter light when cycling along the thin country road between Upware and Swaffham Bulbeck (a small piece of which is used by Lodes Way) in the dark cars stopped to allow me to go by. They must assume that I am on a small motorbike and treat me accordingly rather than see a bicycle which should not take up any space and be whizzed by.

I should also mention that the fluorescent? stripes on the anti-car barriers on Reach Lode Bridge reflected well. To be honest the bare metal barriers on the other side did as well though.

I also saw a couple of deer after joining Lodes Way via Newnham Drove. The works to increase the width near Lodes Way have not finished, but were cycleable. The gates were shut, but there was no bailer twine strung across the gap in one of the gates this time.

My toes were still cold when I got back and for some reason found the door locked and my wife smiling at me but for some reason not realising that it was locked. So I milked the sympathy as I finally hobbled in on my freezing feet. I really must get some new cycling boots.