Cycling in Cambridge at Night

Friday 12th, November: In a change from the usual Poet's day for me Friday became, SLAVE day - Stay Late and Venture Evening. I know it is a bit contrived. I had a meeting in Cambridge from 6pm to 8pm and so my cycling for the day got curtailed and became an evening ride but taking the long way there and back.

The only trouble is that the evenings get dark much earlier in the Winter so it was dark by the time I set off - no I am not scared of cycling in the dark - it just makes it harder to take pictures. Also because it was a meeting I couldn't really turn up in Lycra so I set off a little earlier. That allows me to travel at a more leisurely pace and ensures I don't get too hot and sweaty. I also need to wear cycling gear that is, well not to put too fine a point on it, NOT smelly. For me this means a different pair of gloves, rainproof jacket and hat. I have a very thin rain-proof fluorescent-yellow jacket that is ideal for the task. It also packs up very small and can be easily tucked into a bag for unexpected showers.

I tend not to check the weather forecast too much, all it does it put me off cycling on perfectly reasonable days. Even when it rains it rarely rains all day and in particular East Anglia is a pretty dry part of the country. Having said that not long after setting off a few drops of rain started falling and I had forgotten my waterproof leggings. There was not a lot I could do - if I turned back I would have had to cycle quicker, which wearing leggings is probably damper than getting wet. So I carried on, fortunately the few rain drops stopped and I enjoyed my ride through the centre.

What I did notice was that when cycling through the outskirts most cyclists have decent lights, it is only when you get to the centre of Cambridge does the problem of unlit cyclists tend to rear its head. I guess these unlit cyclists assume that they can be seen by motorists with decent headlights - well it is a different matter for an oncoming cyclist, even with quite good lights. For a start when you are cycling along Parker's Piece or Midsummer Common you have to pay attention to the narrow paths, you also have to be wary of pedestrians wearing dark clothes. So having other cyclists around with no lights and wearing dark clothes just makes it harder. I have clipped handlebars a couple of times - in both cases the other cyclist did not have lights on their bike.

What I have noticed though is more dogs have been kitted out with collar lights. There is something slightly surreal watching a red dot flashing whilst moving erratically (well not like a bicycle) in a field alongside a cycle path. It works though I certainly appreciate it. Mind you half the dog owners who put lights on their dogs still seem to dress in dark clothing themselves. Some do carry torches though which does help on shared paths. I have a powerful front light and yet I find it a challenge paying attention on narrow cycleways. I wonder how the cyclists with such dim front lights you can barely see them manage. I suppose age doesn't help either (my age that is).

As I was travelling for work I only took my small pocket camera (Sony DSCW200) with me. The great thing is though that most automatic cameras do have settings for night photography. What you have to remember though is that the shutter speed is much slower and so the camera needs to be very steady. The rule of thumb used to be never to hand-hold at speeds slower than 1/60s shutter speed. Nowadays most cameras have some vibration compensation, which wins you a couple of stops back, which means shutter speeds of 1/15s or 1/8s are possible.

So this picture taken outside the Judge Business School has a shutter speed of 0.625s. The colour coming from the lights along the path give a warm almost sepia tone to the picture. I rested the camera on a wall to take the picture. Often when taking pictures at night I use the facility to take a delayed pictures. On my camera it can be set to take a picture either 2s or 10s after pressing the shutter button. This minimises any vibration and helps to take a clearer picture. In this case I didn't. 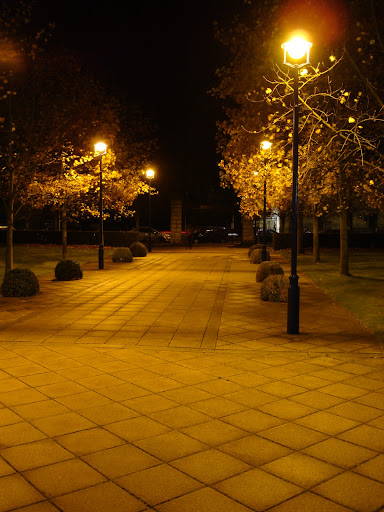 After my meeting I did a little cycling around to try to get some interesting night pictures. This is Elizabeth Way Bridge taken from alongside the River Cam below. I rested my camera on the railings, taking care not to drop it in the river. 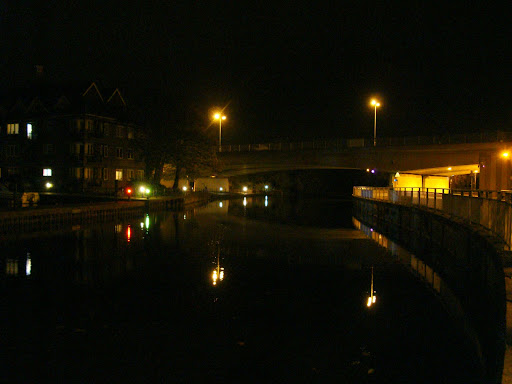 Further along on Riverside I took a picture of the "new" Riverside Bridge for pedestrians and cyclists. I was hoping for a bit more reflection in the water and perhaps a bit more colour in the lighting as well. 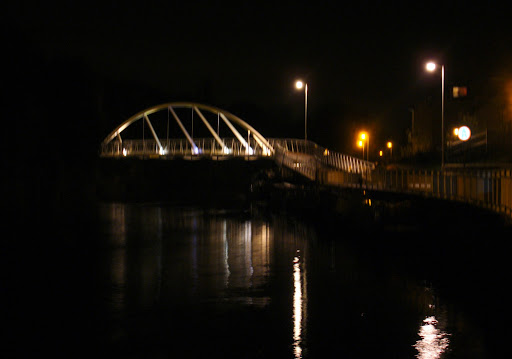 As this was my only real cycle ride of the day I carried onto the outskirts of Cambridge to NCN51 to get an idea of what it was like cycling along the shared-used cycleway with its new solar-powered LED lights. As a cyclists I am in two minds about the benefit of such light. What worries me is that as the lights are set along the edge of the path they can and do get easily covered up. They are also, not a substitute for the cyclist's lights. They are quite nice though, they give the cyclist a sense of where the path is going and whilst you do notice gaps in the strings of lights, most of the lights are quite visible. You still need a decent front light though as they do not show up problems in the path. This particular part of NCN51 has some lumps in the pavement caused by root damage.

This is my attempt at taking a picture. I was resting the camera on a box (which counts the number of passing cyclists I think) at the time, but still could not keep it still. The exposure time was 2s and there are two distinct images. The fact it was dark didn't help though - it made it harder to see the camera controls. This picture was taken near where you can turn off NCN51 to Cherry Hinton. You can see the LED lights - Which look a little like a runway the bright lights are car headlights, which cause streaks as the cars move during the exposure. You might also be able to see the orange dot to the top right of the - that is a street light. 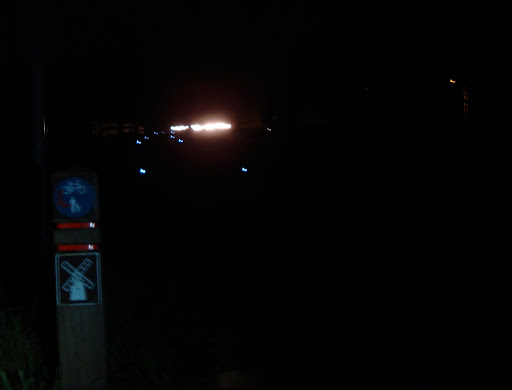 The post in the foreground was illuminated by my front light which was pointing to the left and down to the ground but still shows the why you need a front light and why I would like to see all such posts have decent reflective markings on them. I tried taking a few more pictures but they seemed to get worse so I gave up. As I cycled back it was easier than around 5.30pm as it was past the cycle rush hour and all the later (and sensible) cyclists I saw had front and rear lights.