Friday 26th, November: I buy my cycling kit off and on-line, as I like to support my local cycling shops, Ben Haywards and Chris's Bikes to name but two, which strangely seem to be on opposite sides of Cambridge. (I am thinking of BH's shop in Horningsea rather than in the middle of town.) Last year before my son and I went off to India I got my son some cycling clothing from BH and a helmet, which he wore despite the heat. But I don't really like shopping that much, even for bike-related stuff. As Winter approaches I have found that some of my warmer clothing has come to the end of its days. I can't really complain it is quite old, the elasticity has gone unfortunately. The trouble is buying clothing over the Internet can be a bit of a lottery as it is kind of tricky trying it on before buying.

I have ordered and received some new clothing now though, including some bib tights and fleece tops. I generally go for the layered approach and find a windproof top the best outer layer to maintain body temperature. The Bib tights are more comfortable (think dungarees for cyclists) than shorts/leggings but the downside is that stopping for a wee can be a bit tedious on a cold day and if it ain't cold I wear shorts. Unfortunately the Lycra look doesn't really suit me - but I'd rather be comfortable than not. Routine journeys in regular clothing are no problem but if I am going to sit on a saddle for hours I want to avoid chafing thank you very much. Having said that I do tend to use MTB shorts in the summer - they are both comfortable and practical (meaning pockets). I don't cycle fast enough to worry too much about streamlining. (And yes I have tried on my new stuff to make sure it does fit!)

I have also got myself an early Christmas Present, a more powerful light. Actually I have two reasons for the new light, it is more powerful, which is good for mud and rubble strewn country lanes and the battery life is longer, which is good for longer rides in the evening. One of the other reasons a powerful light is a good thing at night on country lanes is that I have noticed that some oncoming motor vehicles don't slow down for cyclists. well with a brighter light they can't tell what sort of vehicle you are - they just see a bright light and do slow down. I guess I must be getting old, well old enough to want to invest more in self-preservation!

Although there are certain routes I tend to favour more than others, I do like to vary even the favoured routes a little. When cycling to St Ives there are several variations on NCN51 and when cycling to and from Wicken Fen the new Lodes Way route has also opened up a few variations. Sometimes when cycling out to Lode via NCN51 instead of taking the road direct from Bottisham to Lode I carry on up NCN51 to Swaffham Bulbeck and then back down the shared-use path to Lode. It adds a bit of distance, but goes along what I think is a nicer route. Mind you I don't really like the noisy Long Meadow Road, between Long Meadow and Lode, but at least there is a shared-use cycle path which although not that wide doesn't seem to have much pedestrian traffic along it.

The new traffic light controlled-crossing can be seen and white van man seems to have also taken up residence on the pavement, in force - perhaps that is why there aren't many pedestrians they are all stuck behind the van. I think that the issue is really that the road is unpleasant to walk along because the traffic is fast and noisy. 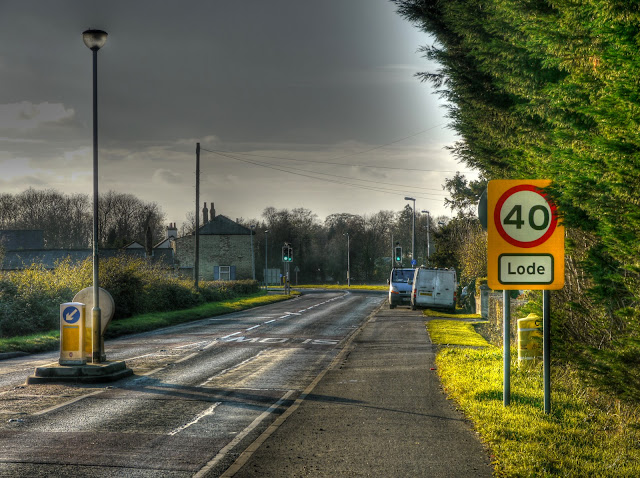 After Lode instead of cycling into White Fen I carried along the byway to the bottom (not far) where there was a huge pile of sugar beet which has been transported off over the last week or so. This is the field at the bottom of the byway which is known as Swaffham Poor's Fen, to the right side anyway. The byway turns into a footpath (on the edge by the hedgerow) and carries on down to Docking Droveway before reaching Longmeadow. 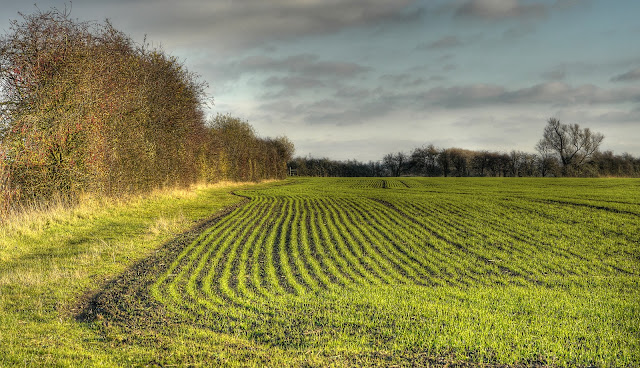 This is the byway, looking back to the entrance to White Fen - the wooden fence to the right hand side of the "road". The lorries have certainly made their mark(s) on this track with huge tyre ruts alongside the track - one good thing though - there isn't that much mud on the road. It does highlight the damage that a fully laden lorry can do to a track though. 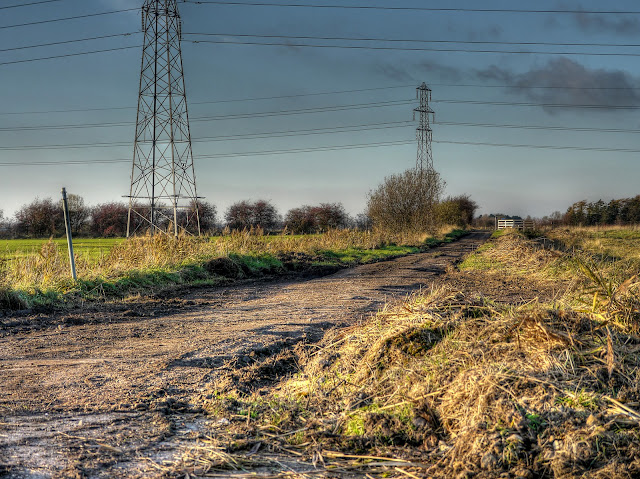 I did take a picture of the pools just before Swaffham Bulbeck Lode Bridge - well one of them. It was frozen over. As you can see this part of the world is an important route for elec-trickery - there are two sets of pylons - it must be to supply all the "Stereos" in Cambridge. 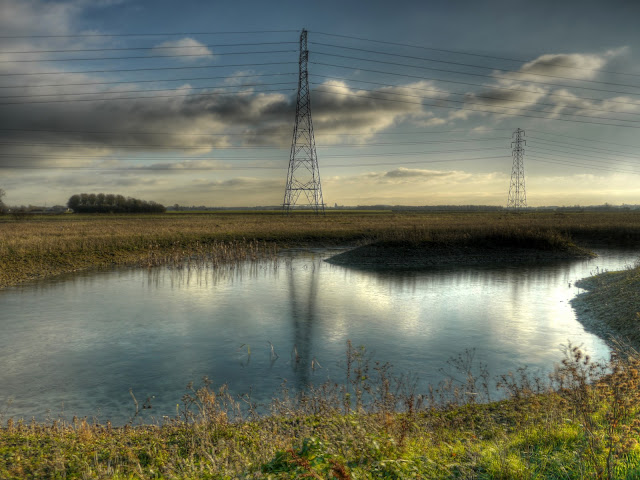 The other side of White Fen and the roads have had some verge work done. This is Headlake drove and heads towards a crossroads, with left to Upware and Lodes Way straight on. I go left and then come back along Lodes Way usually. This time was the same. For ages, well since the road repairs, there have been traffic cones alongside the road where the larger undulations were filled in. The cones have now gone and the ground along each side has been roughed up a bit. I think that it might have been raised up a bit as well, but am not sure. 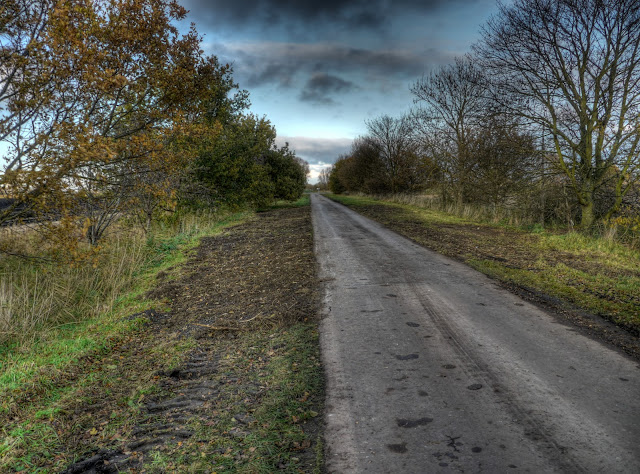 I don't take pictures of every beet clamp I see, it would half my average speed as there seem to be loads (or should that be lodes!) all around. The clamps help to store the sugar beet so that it is in good condition for later delivery. Apparently if the beet freezes and defrosts then complex carbohydrates are produced that cause "severe production problems". The track alongside leads to Spinney Abbey Farm (after a dogleg left).

The village of Wicken is the turning point for this ride, unless I feel like going a bit further when I head across some byways and bridleways to Soham. The track in past the Car park and Visitor Centre at the Wicken Fen Reserve has been a bit beaten up recently. Its width was reduced to make room for a temporary metal road and all non-construction users ended up on a narrow strip which quickly got churned up. The metal road has been removed and what is left is this - the metal track was on the right - the route of NCN11 is in the middle. This bit of path does not get a lot of sun in the winter and it can get fairly iced up and remain so for quite a time. 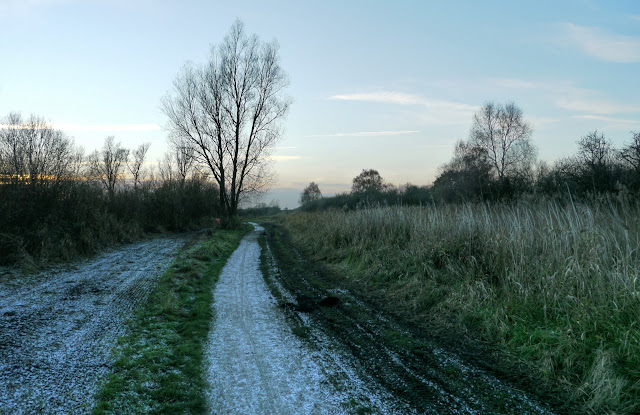 This is the channel that was cut as part of the new Windpump work - it feeds from Monk's Lode round the corner. There is a large concrete pipe buried there as well. 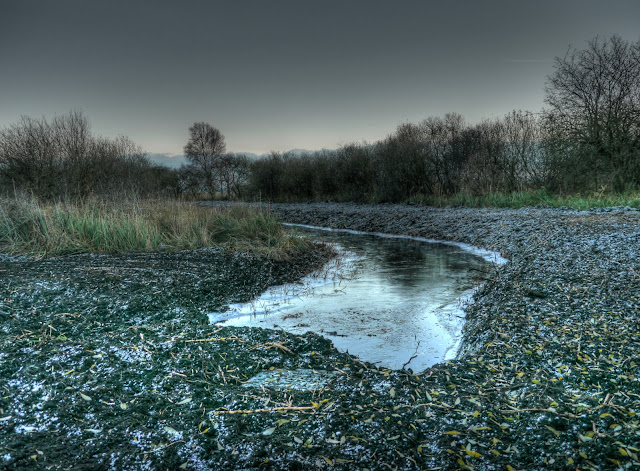 Depending upon the time (of day and year) I regularly find myself stopping on NCN11 by Monk's Lode to take pictures looking in the direction of Baker's Fen at the sunset. This is how it looked on Friday. Although my eyes could see a bit more of the vegetation. 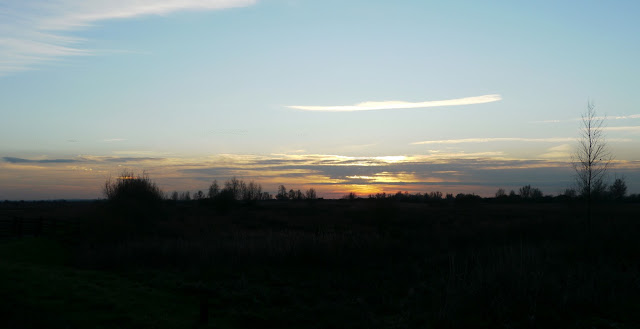 This is not quite the same shot, a different framing, but similar - only made up of 7 pictures with different exposures. This makes the scene seem a little brighter than what I see with the naked eye. 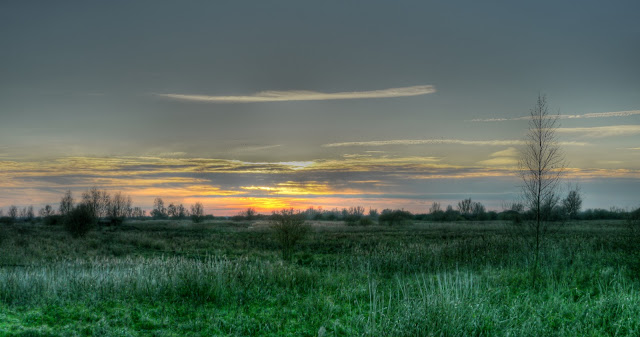 As it was Friday I added in the loop from Wicken to Burwell and then back up Newnham Drove to Lodes Way. As mentioned by MikeC there is some work taking place on the drove near the Lodes Way end. This picture is taken after I scrambled over the rubble and under the digger and had to fling my bike over the trench. The bushes to the right had been flailed and I was a bit worried that there might be thorns about - but, touch wood, no punctures so far. There was not quite enough room under the bucket as I clambered through so he lifted the bucket a bit more for me - before I reached it. (Not that I could swear in a court of law that it was a male operator though.) 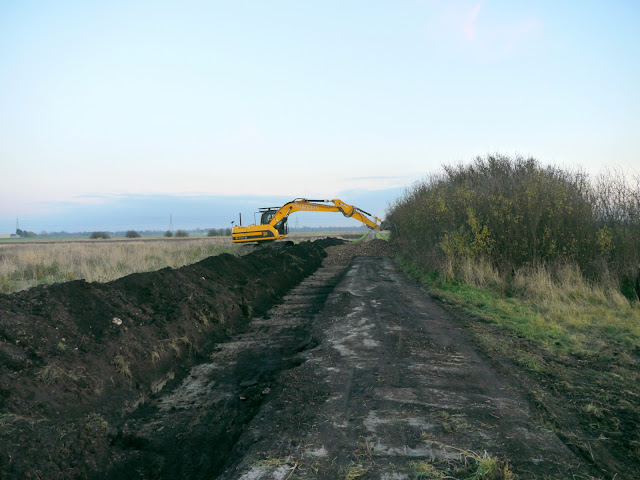 I did see a couple of deer running from me on the Burwell Fen part of Lodes Way - they didn't run far before stopping to see whether I was a real threat or not.

Then it was time for a fairly swift cycle home to avoid being caught out too long after the sun had fallen - it as due to get pretty cold. There was time to stop and take this picture along Commissioners' Drain at the end of Split Drove. though. 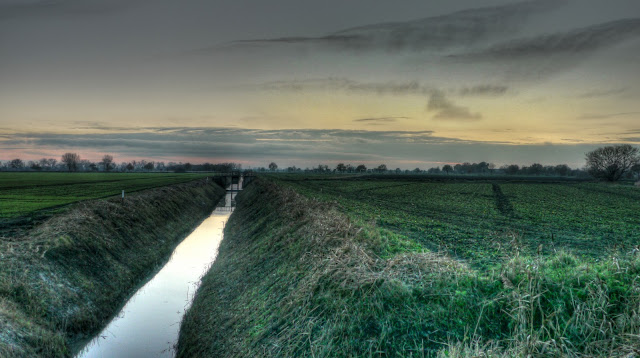 The other problem I had was that my GPS started reporting memory full errors. Fortunately it did store the entire ride - but when viewed as an attached memory on my computer it reported 375Mb free out of 485Mb. It might be a problem associated with the way I store my maps. With the Map of the UK (for downloading onto the GPS) I bought you have the option of downloading chunks of the UK, they roughly correspond to sheets on a 50K map. However I wanted to be able to pop up anywhere (in the UK) without worrying whether I had pre-loaded that particular area or not.

So I downloaded the whole lot and stored it on the GPS, not on the main memory but in optional memory card. This means my memory card has only 267Mb of 1.89Gb free. I can only assume that the GPS uses some of the main flash storage for some sort of working memory which is why it reports being full when it isn't. (Because it is when it is working). Anyway I have deleted all the history stored on the Garmin Edge 605 and I will see how it goes. One of the good things is it takes almost no time to download a new run onto my computer. (It slows down with each additional cycle ride stored.) I do have all the cycle rides that I have tracked stored on my desktop computer.

I also seem to be having "low battery" message on my Speedo - I'll see what happens over the next few days and before replacing the battery I will check the battery voltages on the old and new batteries to see if I can work out what is happening.