Cycling in the Foggy Fens

Saturday 20th, November: Having been away from the Fens for a couple of days there were a lot of subtle changes that made me feel as if I had been away for ages. For one thing it was foggy, although that was not just in the Fens on my way back from Bath on Friday there were signs of fog along most of the route home. Whilst I really don't like driving in fog it doesn't rate as the worst type of weather to cycle in. In fact I rarely think about it. I guess that is because fog and wind tend to be mutually exclusive. I also rather like the ethereal look fog can bring to the countryside. I do try to stay off busy roads though, I don't want any puzzled motorists running into me as they drive mesmerised by the white glow of their own headlights.

The other "subtle" change was that my wife had kindly removed my carefully stowed cycling gear for a wash. I can't blame her, I tend to take a green approach with my cycling gear and use it past its "smell by" date. (When I stop to chat with people when out cycling I try to stand down-wind.) However it do get comfortable with the cycling kit of the moment. So when I decided I needed to get cycling and sooner rather than later there was the annoying delay as I had to find clean clothes. I am not sure if I mentioned it in an earlier Post, I meant to, some of my cycling kit is quite old and the elastic in several pairs of leggings, fleeces and tops is no longer elastic. As I pulled on a pair of leggings I got that crinkling noise form the waistband and no snap back to shape. The trouble is that has happened to a range of items all at once, including my Shimano cycling boots.

So I really need to get some more cycling kit - but I suppose in the back of my mind I hope that winter doesn't last too long and soon we'll have warm sun again. (I know, I am a bit of a hopeless case - but, apart from business meetings, I am still wearing shorts. I cycled to fetch the papers in shorts and sandals, perhaps that is why I get funny looks as everyone else seems to be wrapped up in coats with scarves and gloves. The problem is I don't really like shopping, especially for clothes. Now the Internet is great, it saves people like me from shopping, virtually anything can be bought. The trouble is clothes and footwear really need to fit. I can't quite remember, but a quick search tells me, I bought my cycling boots from St John's Street Cycles Shop in 2002 and they weren't quite the right size. By coincidence I was visiting a nearby town a couple of days later and called in and swapped them for a pair that fitted. It does show that I can't really complain I have used those boots for every Winter since.

My Tandem also came from St Johns Street Cycle Shop or SJS Cycles as they are known, that hasn't worn out.

So after finding some stuff to wear that was still elastic I headed out to Horningsea via Low Fen Drove Way and then onto Upware and back on the Lodes Way - a good route for avoiding too much motor vehicle interaction. Mind you it can be challenging in the dark as some of the country lanes can get covered in slippery peaty mud. The last time I cycled along the route I did promise myself I would wear my cycle helmet after a few unpleasant front wheel slips in the dark. It wasn't until I was out of Cambridge that I realised I had forgotten it - ah well I'd better be careful - again.

Just before setting of I also had a play with my "new" speedometer. The sensor on my old speedo had stopped working so I replaced it (and the Speedo) with a new one, although I didn't replace the handlebar mount or magnet. I've already had the new sensor battery report a low battery, which I have replaced. However I must have moved the sensor a little further away from the spoke magnet when replacing the battery and the speed wasn't alway getting transmitted reliably. In fact I think I might have to replace the magnet with the new one. (I don't like replacing something until it breaks and can't be fixed.)

Being a Saturday I also loaded the week's Archers' podcasts along with the Guardian's monthly Bike Podcast and Radio 4's Thinking Allowed (the program on Incivility and the AK-47) as well as others. Finally I set off and found this pile of rubbish on the Bridge over the A14. How kind of this fly-tipper to only obstruct half the carriageway. By the looks of things they have been uprooting trees and then chipping the remains. I would guess they have sold on any decent logs and left with the roots and chippings avoided compromising their profit margins by dumping the remains on a public road. So if any of you have been having this sort of work done - check where the rubbish was tipped.

Now I often rabbit on about how I feel that the roads are less courteous places, on Thinking Allowed they also had some research on Incivility indicating that low-level rudeness was on the rise. This is another manifestation of that "rudeness". Then on the Bike Podcast Mark Cavendish was being interviewed and asked whether he jumped red lights or cycled on the pavements - his answer was no. He expanded his comment by saying that all those cyclists who do such things make the roads a less pleasant (and safe) place for all cyclists. Having witnessed a small minority of cyclists in Cambridge cycling at night without lights I have to agree. 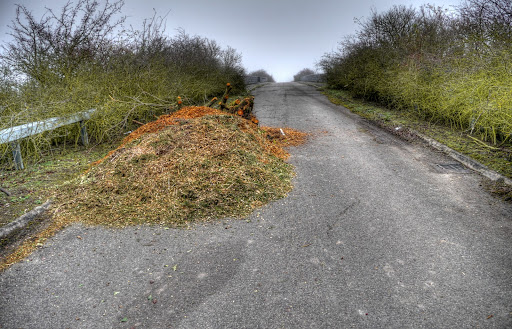 The track was still pretty wet and muddy from the recent wetter weather, but nothing too tedious. The fog seems to have the effect of layering the countryside, almost like a stage scene. 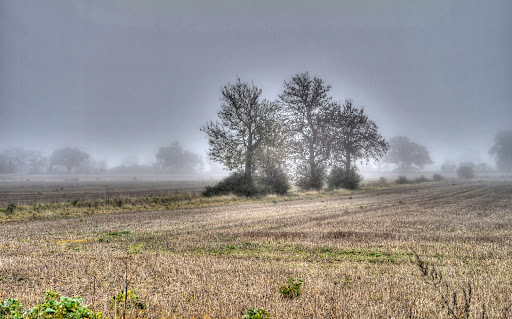 This is the track, in places the leaves covered up the mud underneath -but I quickly found it was better not to rely on the leafy bits of track. The fog has the effect of shrinking the world and also deadening the sounds around. Here, where Low Fen Drove Way heads east round Snout Corner I couldn't see beyond the end of the track. 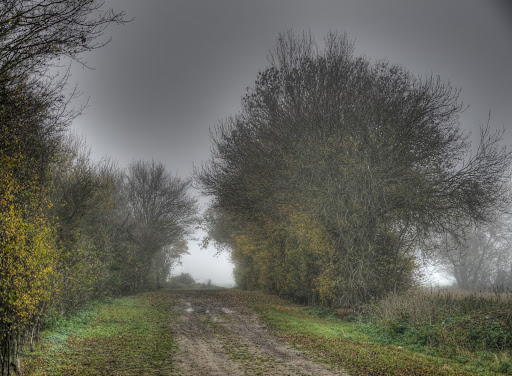 Later, passing along the old route of the disused Cambridge-Mildenhall railway line, behind Anglesey Abbey there was the same effect. 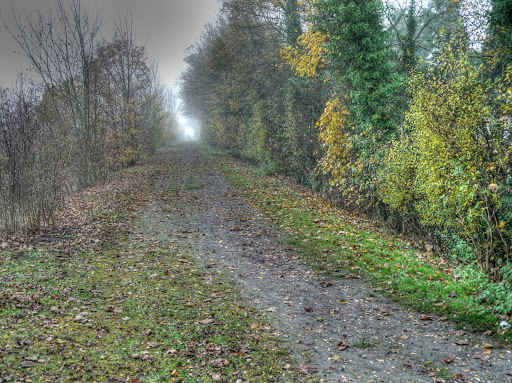 In this case it gave a ghostly quality to the walkers with their dog up ahead. 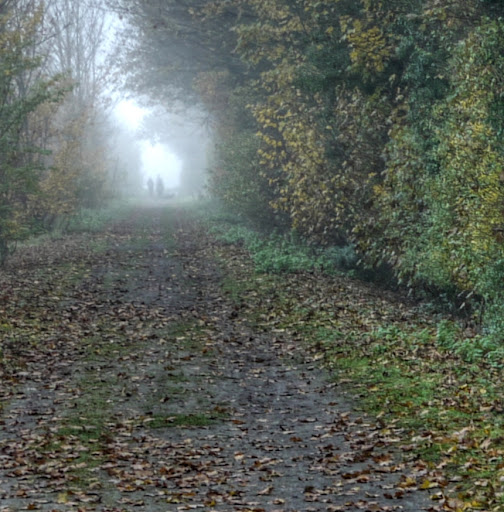 I also noticed that the moles have been busy undoing the repairs along the banks of Bottisham Lode between Lode and White Fen. There were loads of molehills all along the freshly compacted earth. Is there something that attracts the moles? Perhaps the newly flattened bank provides the right balance of diggability and stability to ensure the perfect mole home. It can't do the bank repairs any good though? 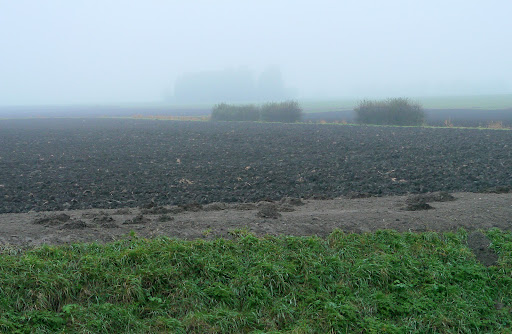 Further along Bottisham Lode I noticed a couple of horses wearing "coats" - the only bright bit of colour in a rather dull landscape. 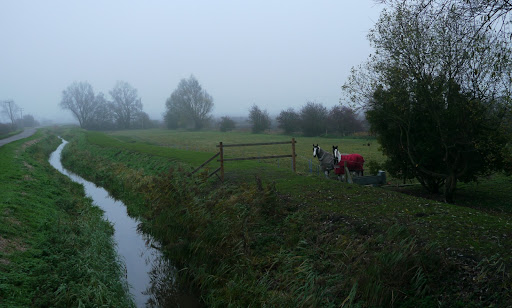 They look a little bored or perhaps they are thinking that I am the only bit of colour in an otherwise dull landscape as I pass by with my fluorescent yellow jacket on. 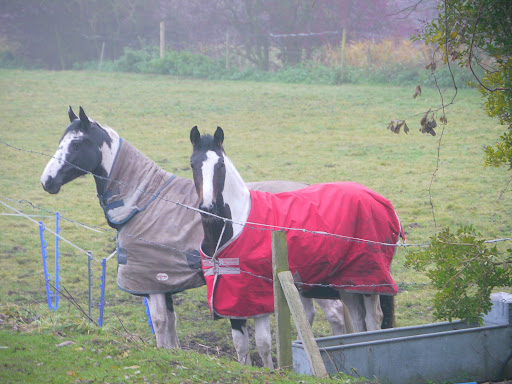 After White Fen I chose not to detour round along Swaffham Bulbeck Lode and then back down Rail Drove onto the Upware Road. The byway alongside the lode was a bit chewed up the last time I went by. However there was this mysterious van, perhaps his Satnav and taken him around the houses (well farms actually). Rail Drove is not an obvious route to anywhere really. 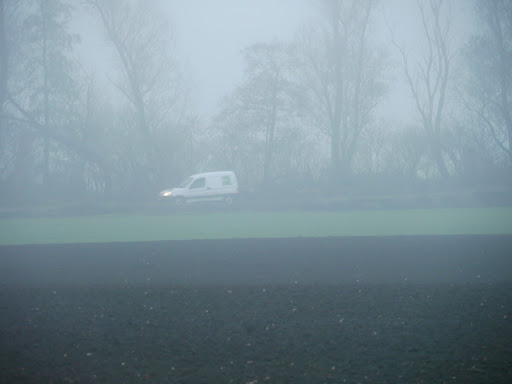 Once it gets dark then there is less opportunity to take pictures. Mind you the temporary metal road alongside the path into Wicken Fen has now been removed. A good thing as the bit of path that we were all restricted to was becoming very chewed up. They must be making progress on the new Windpump construction.

Despite my better judgement I headed down to Burwell and then back up Newnham Drove to Lodes Way. The last time I had come very close to falling off as the dark peaty mud and rutted road is quite a challenge in the dark. It seemed a bit easier this time, there were still the ruts but a little less mud on the road. When I got to the gate it seems that someone has reinstated the string across the gap in the gate. A good job I didn't just try to cycle on through. I slipped the lower strand up and managed to get my bike underneath it. Which I assume is what is implied. I am not quite sure why the string is back - I am not aware of any animals grazing in the fens. I slid the lower length of string back down again once I was through. welcome to the Lodes Way with a variety of barriers to test the ingenuity of the people who use it. (There is also the footbridge over Burwell Lode and the bridge over Reach Lode has some largish lumps, not to mention the occasional puddles. Whilst I don't mind roughing it on my bike I do believe that if we are to attract more cyclist users and hopefully reduce the number of people who drive in and litter the countryside with their cars (and with their rubbish sometimes) then the place ought to be more "welcoming" to townies. 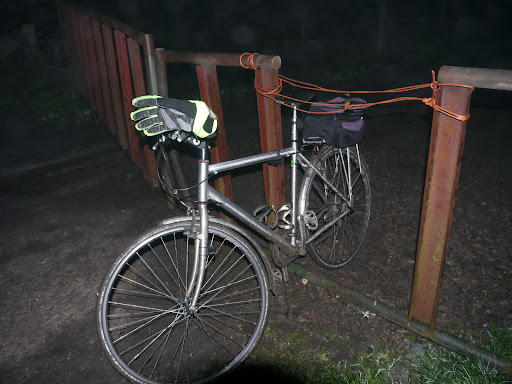 That was it as far as pictures, except as mentioned by MikeC I realised that the new Lode crossing was in action. To be honest I only noticed once I had crossed the road as a road user. Here it is looking back, the car at the junction is coming from Lode and the lights are on the road towards Swaffham Bulbeck. 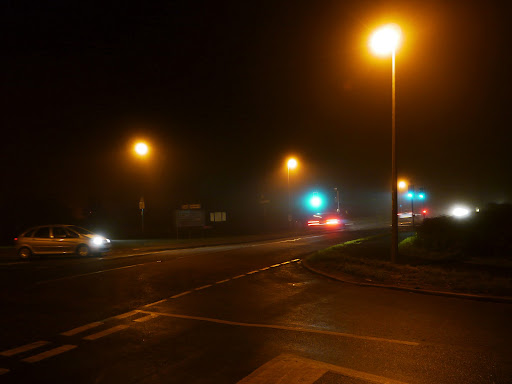 When I got back I noticed that my speedo was reporting a low battery again - presumably the Display battery was also in need of replacement.