A Soggy Sunday along Lodes Way - doesn't it get dark quickly now the clocks have changed?

Sunday 31st October: Sunday started with the subtle but noticeable disorientation that comes from a switch from British Summer Time (BST) to Greenwich Meantime (GMT). I have done my fair share of international travel both to the US and just as often to the Far East, as we call it here in the UK. I got pretty good at dealing with the 8 hour time shift, both in terms of dealing with being tired and with shifting back to the UK timezone. However, for some reason, I find that the single hour change almost takes longer to adapt to. I feel hungry at the wrong time, I wake up or feel sleepy at the wrong time - yet "nothing" has changed, the country is the same, there has not been any long journey. Still, I'll get over it, I always have in the past.

Back to Sunday, I got up early and wasn't really planning on cycling, but in the end the nice weather, mid-day drew me out. I just went out for a leg-stretcher, no bumpy tracks, just out to Wicken Fen via Upware and back via Lodes Way. It was slightly weird knowing that it was going to get dark an hour earlier, mind you I have been taking and using lights for a few weeks now so it just means more of the ride will be in the gloom.

Although I stuck the to cycle routes most of the way I did go "off-piste" just before entering White Fen, or rather I cycled on past White Fen, the track was a byway that stops around 100m down from the Lode-side entrance to White Fen where it then turns into a footpath. The footpath "splits " into two Docking Droveway (Track) and Cranney drove (Track) - unfortunately both still appear as footpaths on the OS map. I've said it before, but it strikes me as strange to have a byway to "nowhere".

So why did I cycle along a no-through byway - well to get this picture of a sugar beet heap at the bottom of it. The 'campaign' which is how farmers refer to the harvesting of sugar beet takes place between September and Christmas when the sugar content is highest and before the onset of the damaging frosts. This is the biggest heap I have seen this year.

The view behind me, with the byway track running left to right and a helpful footpath sign. The clouds look more dramatic than they felt at the time - the sun was quite low already though - I blame the switch to GMT. 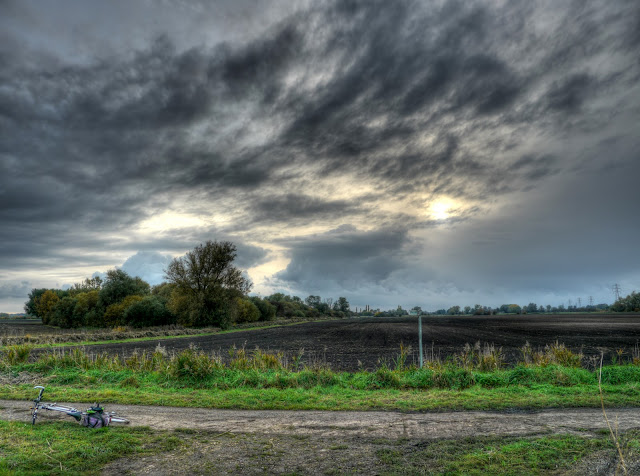 I stopped to take pictures of this row of trees and the leaves lining the furrows of the ploughed field. Lodes Way is to the right of the line of trees and at this point I was about to turn left to head up to Upware. As I was taking pictures a cyclist and her dog stopped to ask how far it was to Upware (actually she did the asking not the dog). She had come along Lodes way from Wicken Fen with her dog and was originally planning on cycling around a loop back to Wicken. Unfortunately she had tried to get the dog to help pull her along, it was quite a big dog and she had a slight accident and fell off her bike and bruised her knee. So she was wondering whether to plough on or head back along Lodes Way. In the end she went back the way she came. I did mention that I was taking the Upware route and she could either carry on up the road or take a "short-cut" along the bridleway down the side of Reach Lode, down the side of Wicken Lode and then along Harrison's drove (mud -track at the Wicken Lode end though). Given her recent bumps it seemed easier for her to head back the way she came since the track was wider and easier to cycle and lead the dog.

Her parting words were what a lovely day to be out in the countryside it was - and I agreed. 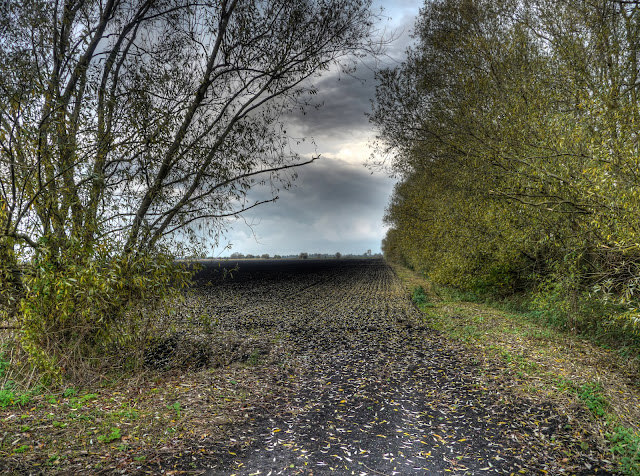 Cycling along the the Upware road, between Upware and Wicken village the weather behind me started to look a little less promising. There appeared to be rain and it was coming my way. By the time I got to Wicken and turned back I did indeed find myself heading back into that rain cloud. It was pretty soggy cycling down NCN11 through Wicken Fen to Lodes Way. Although I did pass the cyclist I'd chatted to earlier - and the dog.

Instead of taking the footbridge over Burwell Lode I cycled into Burwell along Factory road and then back to Lodes Way along Newnham Drove. It is by no means a short cut, but it does provide a way of slightly extending the distance of the ride, without straying onto busy roads. I think it adds around 5Km, and I suppose I could check out the distance. So I have done, using Bike Route Toaster to check out the two routes it seems to add an extra 5.1Km/ 3.2miles. So my guess was not a bad one. Although ti was raining I was wearing a waterproof jacket and long Lycra leggings and waterproof gloves so it was not too bad. The cycling was creating enough warmth to stop me from chilling in the rain. Mind you rain does tend to put me off taking pictures though. My camera bag has an extra waterproof cover which gets in the way of removing the camera and f course I don't really want my camera to get wet (or to get rain drops on the lens).

I did get this image of the sun just slipping below the horizon, because of the mist and gloom the picture did not come out as well as it looked in real life. Or to be more precise the blurry picture looks way less impressive than it really looked. You can see the Reach Lode Bridge just to the extreme right of the picture. It is a pity about the telegraph poles though. There is very little "unspoilt" countryside around, which just goes to show how long the inhabitants of the UK have been around making the land fit their needs. Apparently even in Neolithic times the Peak district was deforested by slash and burn. Some of the byways and bridleways I cycle along (and extol the virtues of) were really nothing more than the motorways of their day.

It was lights on the for the rest of the journey and because it was Halloween there were a few pumpkins out in evidence, including this one at my doorstep - that in best Blue Peter tradition I (and my daughter) made earlier. The dots under the eye are a nod to the latest incarnations of the Cybermen on Doctor Who (a BBC TV series). Next time I will cut a thin channel down from the eye with a hole at the end of it to represent a tear drop. 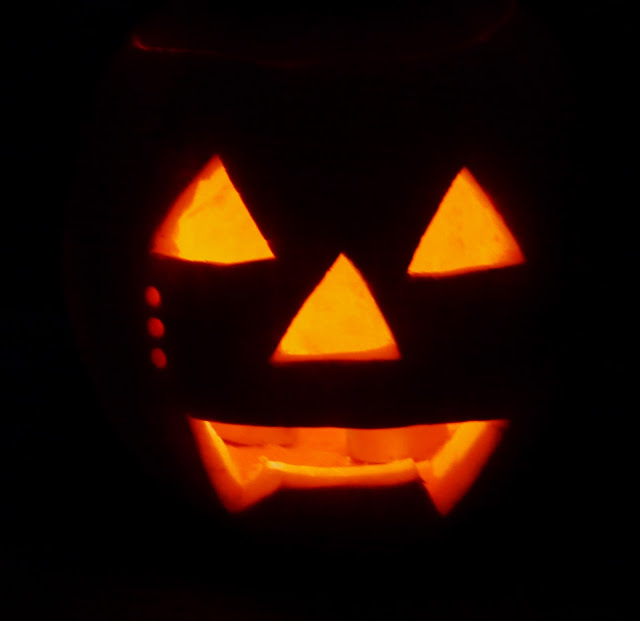 When I get back from cycling after being in the rain I have to be a bit more careful about sorting my gear out - in my house cycling is acceptable, paddling through the house in soggy clothes is not. Fortunately we have towel radiators in our Utility room that make ideal drying spots for wet cycling gear - although I do compete for space with freshly washed clothes and woe betide me if I get those dirty.