Cycling around the Satellite Dishes - Cambridge to Haslingfield and beyond!

Although I had not managed to check the map for some unexplored byways for my Saturday ride and I did not even get out on Sunday. I don't cycle every day - and there was the Spanish Grand prix to watch after all. A couple of days later and I felt the urge to check out some of the unexplored (by me) byways near the Mullard Radio Astronomy Observatory (MRAO) which is near Haslingfield and then cycle back to Cambridge through Coton along the Whitwell Way (a path about which I can find little information).

Here is the route I took - I could have added more bits of off-road, such as using the Cambridge to Balsham Roman Road. (A useful website with a list of the flora and fauna to be found there.) However there were three byways I had not cycled along before, one alongside wandlebury and a couple over by the Satellite dishes. I try not to add too many unknowns I only have a certain amount of time in which I can sneak off for a cycle ride you know.

I always find the idea that the Babraham Road leading out of Fulbourn will only get you to Babraham by byway, mildly amusing. It also means that the road itself is generally pretty quite. All the wonderful weather we have been having seems to have been ripening the crops in the fields. Today was not a sun screen day, although I did carry it in my rack pack - as you can see the sky was blue, but the clouds were quite large - providing a reasonable amount of shade. This field is alongside Rectory Farm looking towards Cambridge, which you can't see because it is over the hill. 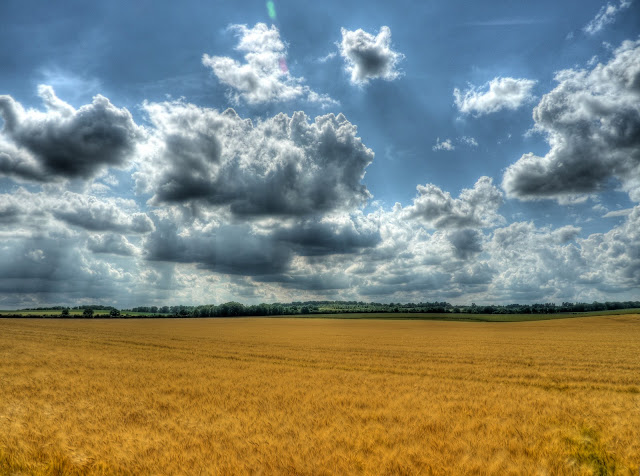 The hill is called Mag's Hill and reaches 48m above sea level - although don't ask me where it is precisely. 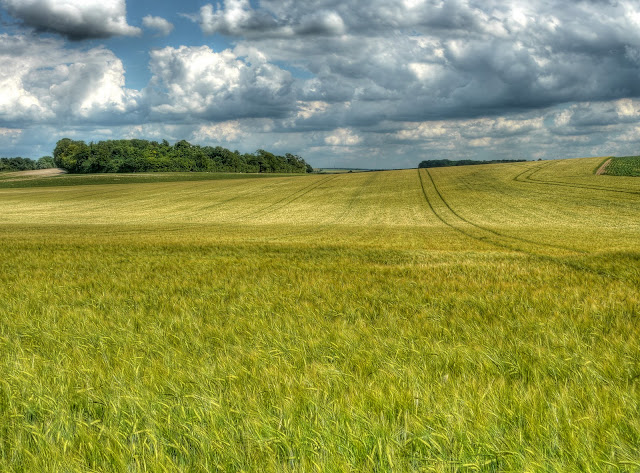 The road then turns into a byway before meeting the Roman Road, also marked on the 25K OS map as the E2 European Long Distance Route. The route then goes right before turning left on the edge of Wandlebury. This byway has not made it onto the OSM Cycle map - but it is on the 25K OS map. It is a fairly wide green-road seen here looking back down the track towards the Roman Road. You can see that someone has planted concrete boundary market posts along the edge of the track. 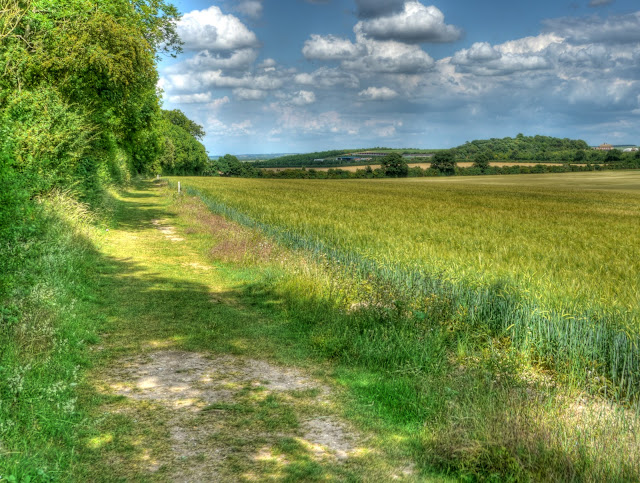 Looking forwards the track rises up a hill before turning into a gravel road - which I took reasonably slowly - as it dropped down to the dreaded, by me, A1307. This time around I was closer to the bit where it is a dual carriageway and in the main got a bit more space from cars as they sped by. Although it was a White Van that overtook me with the most consideration. In fact with no evidence whatsoever I feel that Volvo estate drivers seem to barely give any leeway. I think that as cars are made safer and more comfortable it leads to the drivers unwittingly disregarding other road users such as cyclists and motor-cyclists. 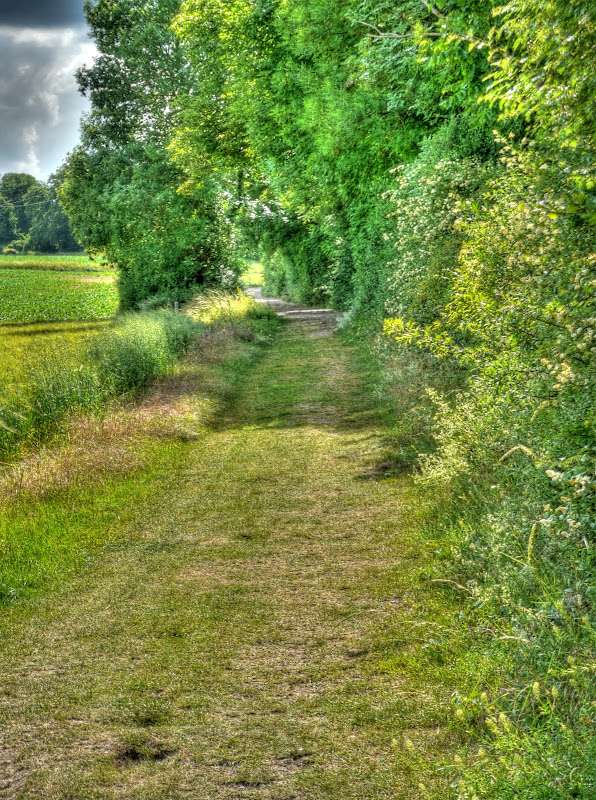 As I was entering Hauxton I noticed that the locals seemed well made up as they gardened in their allotments. At the junction of the B1368 and the A10 you could hear the noise of the work on the old Bayer Crop Science site which is being remediated - is this a polite way of saying de-contaminated? The report in the Cambridge News is less euphemistic "Meeting told clean-up is health risk to villagers". Perhaps that is what is affecting these gardeners? 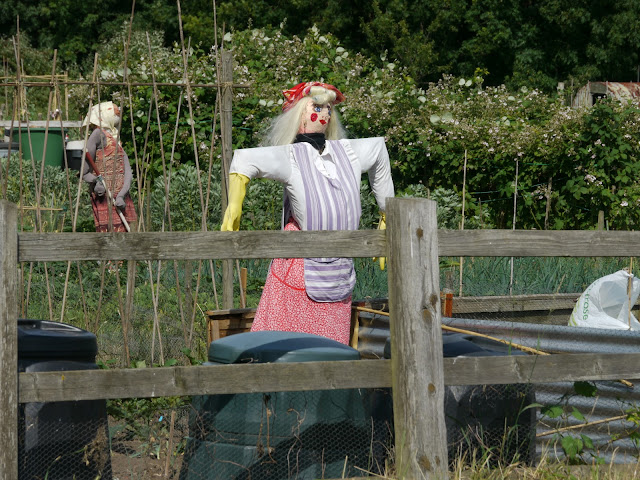 The route from Hauxton to Haslingfield is both easy and delightful - it starts off as a rather sandy road - which requires a bit of care as the tyres (well my tyres) occasionally dug into the sand. After passing Rectory Farm it is much easier and leads onto an open grass track - seen here, looking towards Haslingfield. 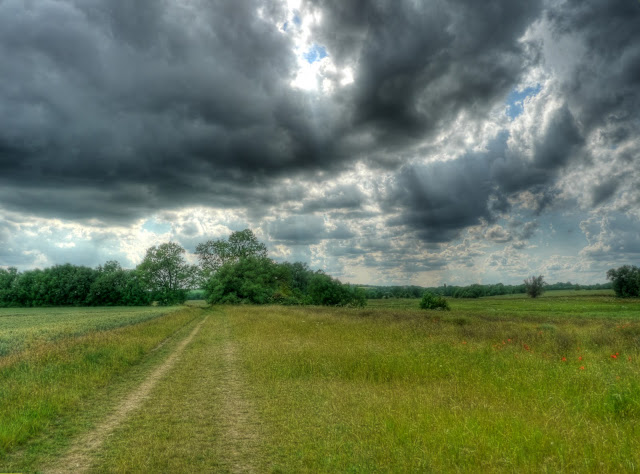 The view from the track seems to be one of endless countryside because of the lie of the land. The River Cam or Rhee, it has two names on the OS map, lies just over by the line of trees in the middle-ground.

The set of pictures would not be complete without one looking back down the track towards Hauxton. The skies were clearer behind me than in front of me. 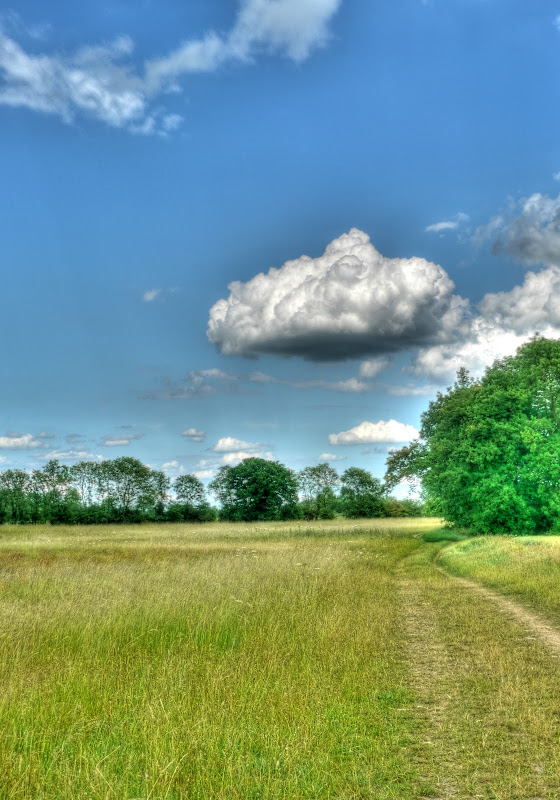 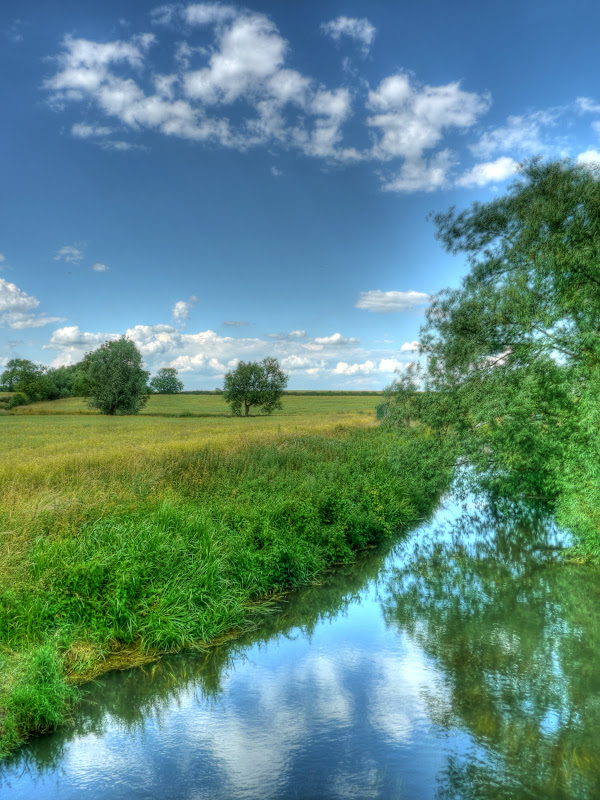 The path has been gravelled on the Haslingfield end - and there is a choice of two exits, I took the left route - Porkers Lane which led onto the High Street. Not the most picturesque of starts to a lovely shortcut to Hauxton. 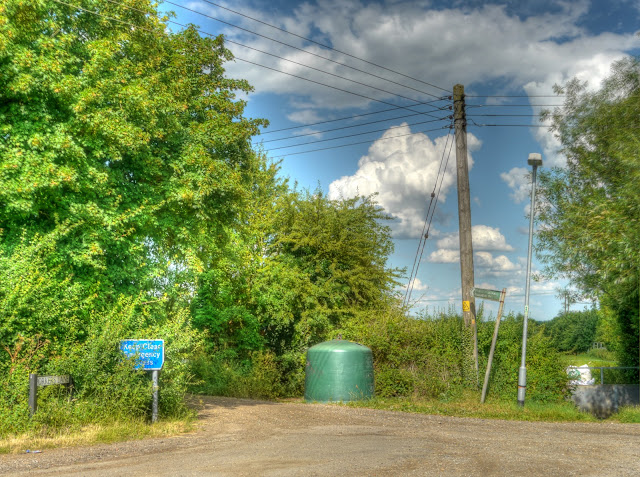 After heading North on the Barton Road loads of Satellite dishes come into view from the MRAO. I wonder what they are all looking at? 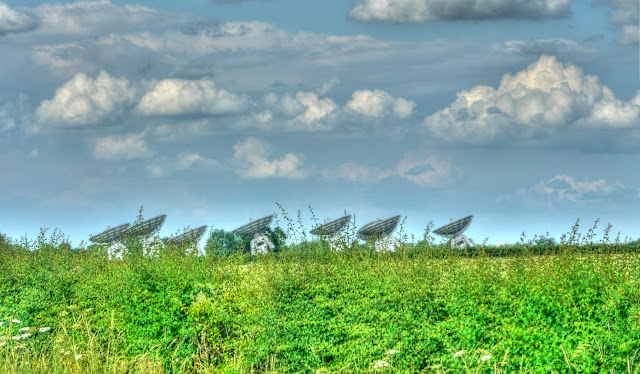 The view West - excellent cycling weather - sunny but with some cloud cover. 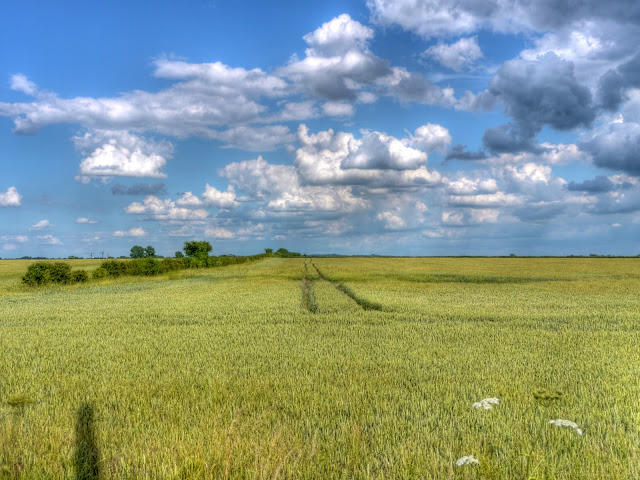 In order to get a better view I cycled up the road a little. 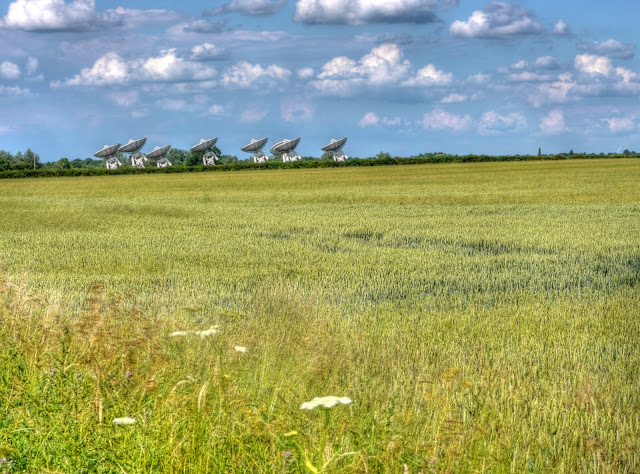 I also passed a squished snake on the road I rarely see snakes when cycling, just occasionally I pass them basking on country paths. I think this was a Viper - it had quite a pattern. I did not stop long I did not want to be squished. It was a straight and fairly narrow road - not my favourite type of road. 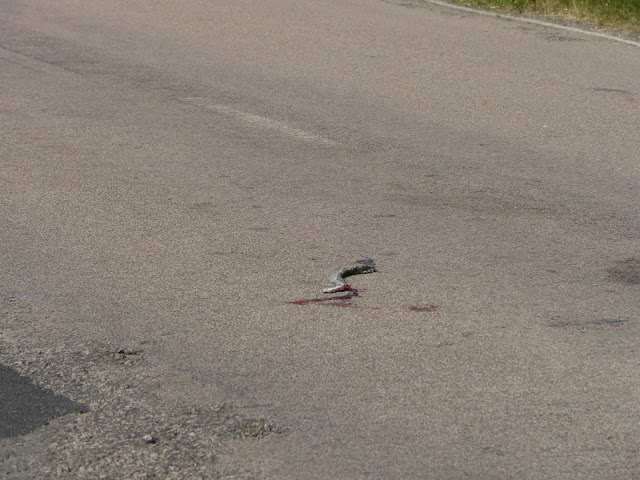 The turn off the Barton Road did not look too promising - the bridlepath looked a lot more overgrown than in the Google Streetview picture in the link. I was wearing shorts and so looking out for stingles. The path had also been used by horses when the surface was wet and so under the grass there were hidden hoof-prints - I kept in a low gear and managed to cycle along the track with only one dab - but it was quite slow going. When the path opened up there seemed to be dishes all around. The Lou Reed song - Satellite of Love popped into my head.

This one is testing a new secret cloud weapon. 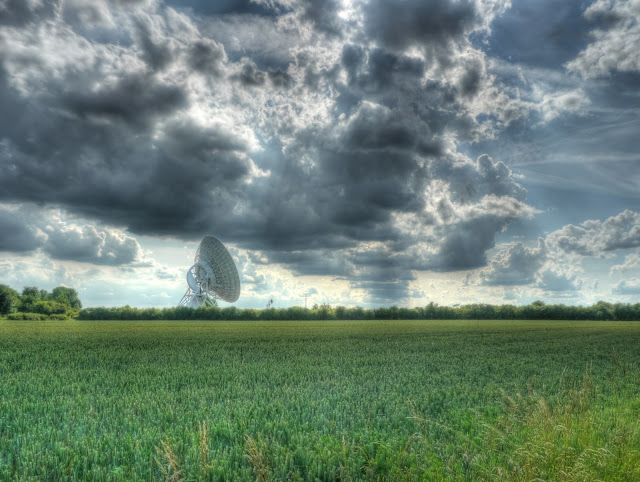 Where the path opened out the surface was easier to cycle along - here it is seen looking back the way I had come. The trees were where it stopped being enclosed by hedges on both sides. My bike is having a rest after the hard work. 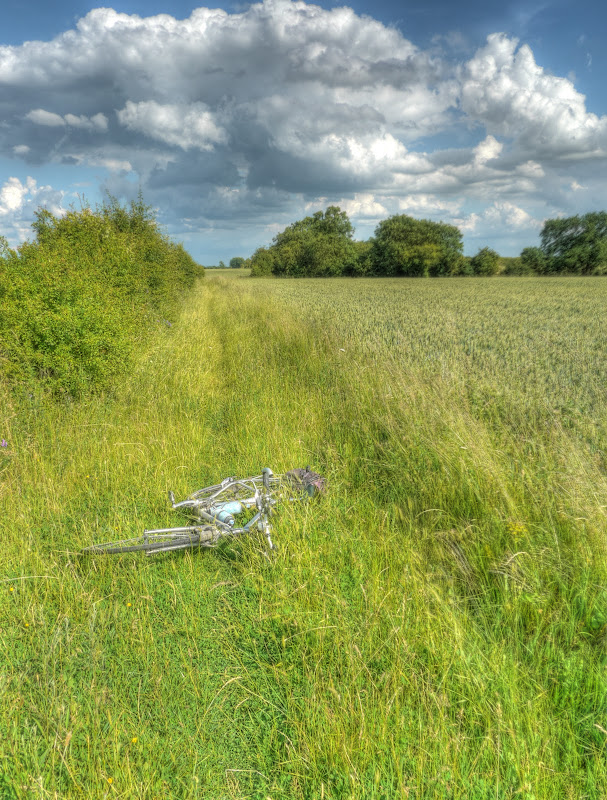 I saw lots of Tufted Vetch growing in the hedgerows - here with some, what looks like Common Bird's Foot Trefoil (Lotus corniculatus). 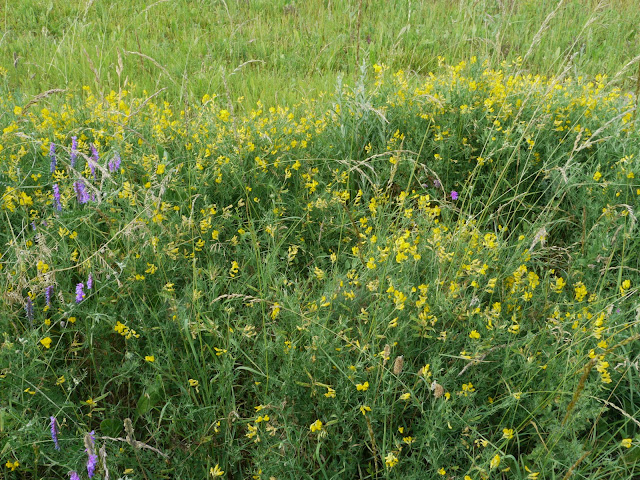 The path then passed a private road - with signs indicating the road was private - part of the MRAO I think and then emerged onto the A603. Which amazingly has not yet been fully photographed for Google Streetview. I then turned left and cycled down past what appears to be the main gate for the Astronomy Observatory and then turned right onto the Comberton Road. The A603 is quite busy and I am glad I was not on there for too long - busy fast roads are very noisy when you are on a bicycle. The turn was through about 310 degrees and took the route North. Some of the Radio Telescopes (Satellite Dishes) are on the disused trackbed of the Cambridge to Oxford Railway line, also known as the Varsity Line. Here is the line looking West - the Comberton Road goes over it. 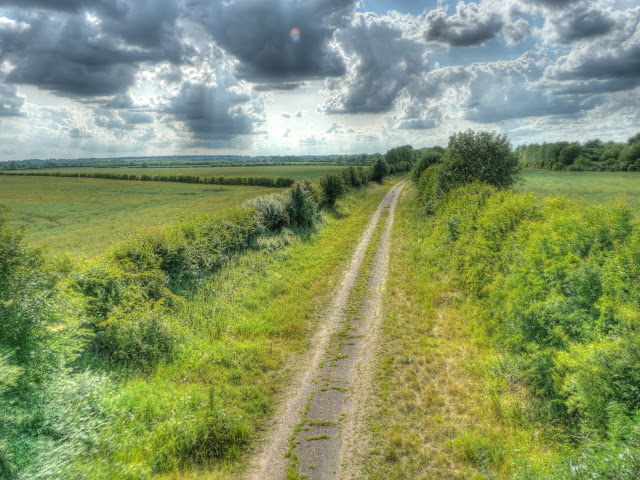 The same line looking East . It was the East-West orientation that made it particularly useful for the creation of the Observatory. A number of small telescopes act together like a much bigger one. This picture is at the full zoom of my camera. 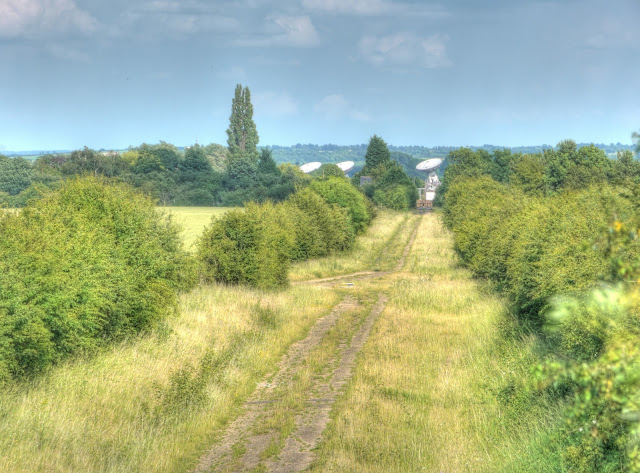 The same picture, but at minimum zoom you can still just about make out the satellite dishes in the distance. 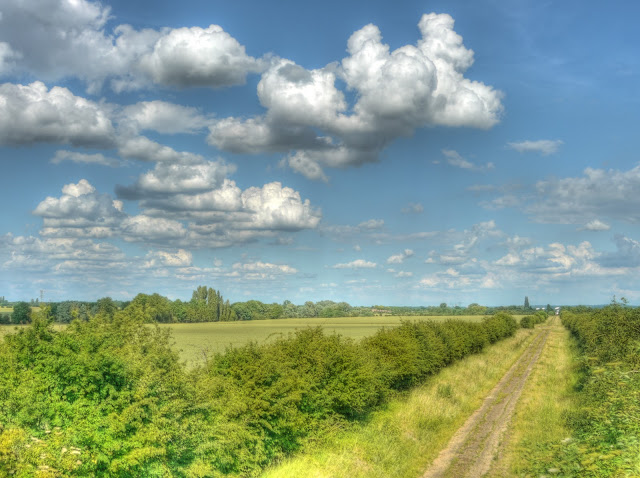 I turned right, off along another byway before reaching Comberton, it does not appear to have a name on the various maps I have looked at, but runs alongside the entrance to Fox's Bridge Farm. he track then takes a right turn and heads North towards Comberton. At the corner of the turn I stopped to take one last picture of a satellite dish - I have no idea how many they have - but the Observatory seems to spread over a large area. 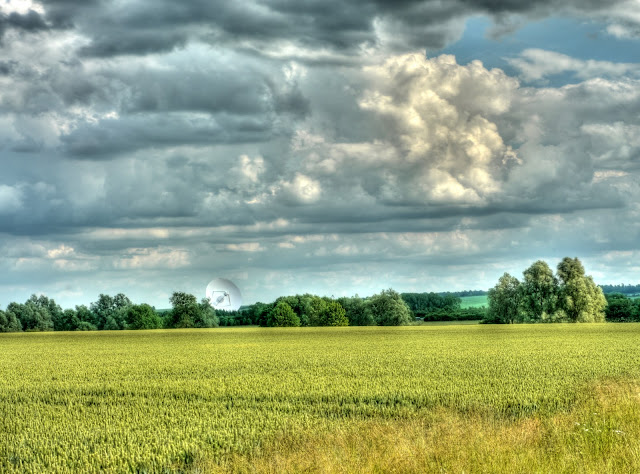 This is the track - heading North to Comberton.The road then climbs out of Comberton - the low spot , including the track was around 20m above sea level. 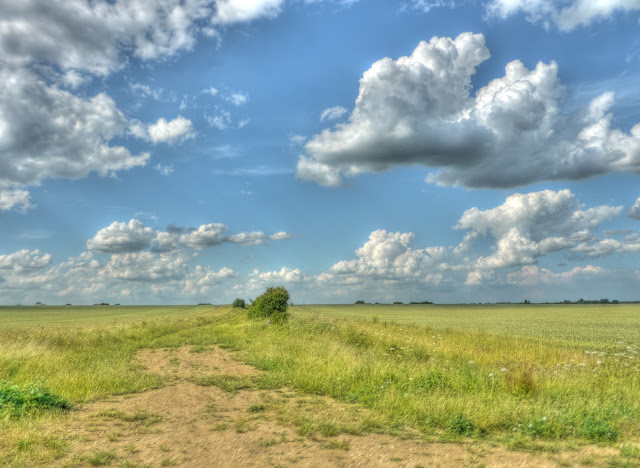 The road out of Comberton, Long Road, climbs to around 51m before dropping down to around 30m. At this point I turned right of the road onto the Whitwell Way. It skirts around a danger Area, there is a rifle range nearby so you will see quite a few warning signs about not straying of the path and not picking up any ordnance. The path seems to skirt around the hill along a contour line so there is not any more climbing left. (If you can call a few 10s of metres climbing.) The path is pretty good, bumpy but with open views - Cambridge is in the distance beyond the trees. 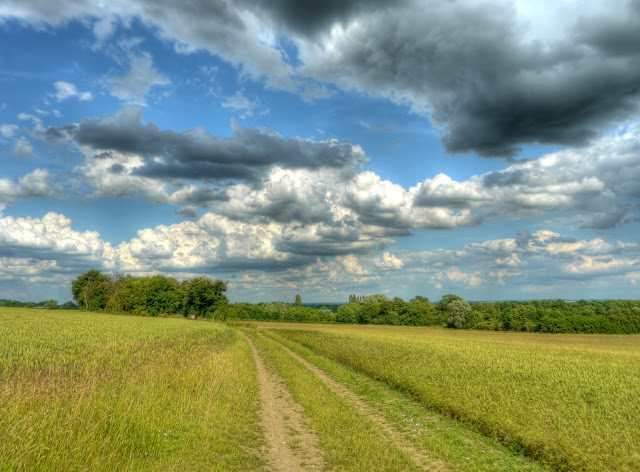 The view from the path looking North towards Madingley Wood and the American Cemetery. The weblink is to an unofficial site - so I hope that it does not have any problems. The Cemetery is a sombre and moving place and worth visiting. I went with an American who had family listed there. 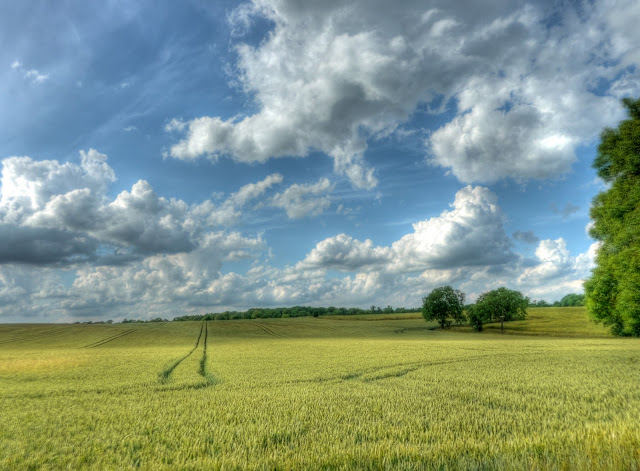 A close-up of the two trees in the last picture, I liked the way the path seemed to swirl around them. I also got stung by a stingle as I was leaning on a fence post to steady my camera. Who says I don't suffer for my art! 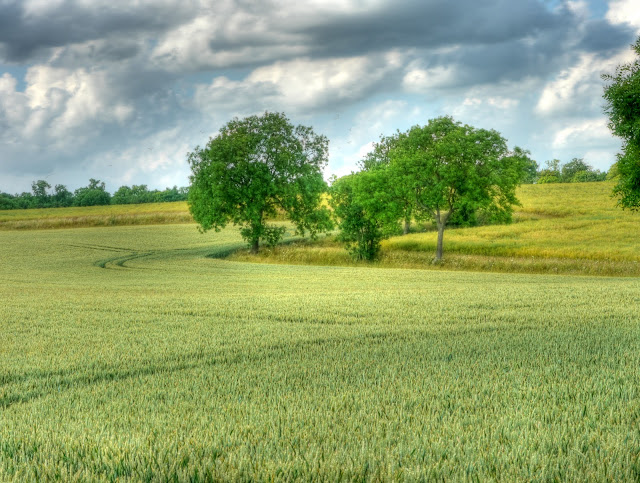 Once back in Cambridge I cycled along Gilbert Road, it features as a through route for cyclists on the OSM Cycle Map. I counted 16 cars parked in the cycle lanes on either side. I also got some hostility as I pulled out to pass the cars from the speeding cars desperate to get home (or somewhere?). This road really would benefit from having enforceable cycle lanes. Mind you it would be good if vehicles parking on pavements and shared-use paths also got tickets and RLJs got tickets as well. (Both cars and cyclists.) It would be even better if none of this happened to require any tickets in the first place.